Emerging from the vortex. 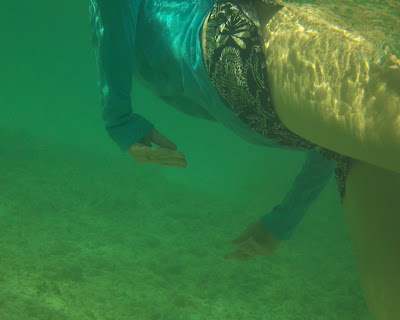 Well. I guess I was even less prepared than I knew. The hospital experience was, you know, a hospital experience. We had to be there at 5:30 a.m. for a nuclear medicine ordeal that was grossly under-represented as being "like a couple of bee stings." I'm going to call bullshit on that and let it go. Three hours later, radioactive material snug in my sentinel lymph nodes and prepped with an IV, I went into surgery. Which, although I didn't know until later, lasted seven hours. I spent another three in recovery while they gave me bag after bag of fluids trying to get my BP to an acceptable level.

My husband and my son's fiancée sat with me that evening, and my husband spent the night sleeping in a chair next to me, a reversal of our experience after his stroke. And then they discharged me around lunch time. I was so glad to be home and wrote a post on Facebook saying so.

And then all hell broke loose. Five days later, I came up for air long enough to post this:
"I was just glad to be home from the hospital. Sure, I was in a lot of pain and had limited mobility, but I had help and encouragement and I was ready to heal. And the Universe heard and said “You think you’ve got this? Ha ha! Fuck you! How about I see your breast cancer and raise you unrelenting migraines? How about I put your skull in a vise for days and reduce you to a shivering, puking husk of a person? Then how about I finally ease up for a few hours to give you hope that you’ve turned a corner, then wallop you again? Still think you’ve got this?”
Well, Universe, I can only say that If I were a prisoner of war, I’d have long since given up any secret I knew just to Make. It. Stop."

And then I retreated again, pulled back into the storm. I had spent nearly a week throwing up everything I ate and reeling in pain. Finally last Monday, my surgeon told me to come in and she suggested that maybe my narcotics were actually triggering the migraines. I switched to ibuprofen and very gradually life started to feel a little more like life. But only a tiny bit. I still hurt like crazy. I hate sleeping propped on the couch and maneuvering around drain tubes and having them flushed out twice a day. I hated setting an alarm to take an antibiotic every four hours around the clock. I hated lying awake with my skin on fire and counting the minutes until daylight.  In some ways I hit bottom Wednesday when I wanted to punch anyone who was telling me to be strong. Because I have discovered that people can react pretty badly when you aren't. I think it's overwhelming to be exposed to someone else's pain and many people just pull away. And hell, I didn't like me either. I didn't know if I even wanted to make it. I will tell you plainly that I was in a very dark place.

But yesterday rolled around and I went in to see the plastic surgeon. She was able to remove two of my four drain tubes, which helped a little, in spite of the fact that it was a remarkably painful procedure. It was quick, but an astoundingly sharp pain. I may or may not have yelled, "Fuck!" Even so, I am eager to get the other two removed and get on with the reconstruction process.

Even beyond the pain, which rolls over me in an electric way, it's just hard. I can't look at myself. I don't feel whole. I can't reach things or lift. I have a schedule loaded with appointments with surgeons and oncologists and decisions ahead about treatment. I have procedures and surgeries still to come and a long path of healing. I find myself reassessing relationships and thinking a lot about how I want the rest of my life to be.

Before you encourage me to look at the bright side, let me say that I am keenly aware of the blessings in my life. And I'll get to those. But this cancer business truly sucks with a suckage unimaginable. I feel like I am slowly making my way to calmer waters and letting myself just float for now.
Posted by Secret Agent Woman at 12:52 PM No comments:

"The changing of sunlight to moonlight, reflections of my life."

The day after I got my invasive breast cancer diagnosis, I headed into work and flipped on the radio as I drove. They were playing a song I've not heard in many years, the only hit of The Marmalade, from 1969, called "Reflections of my Life." The lyrics at the moment I turned the radio on were:

I probably don't need to tell you I cried all the way to work. (And pretty much off and on every day after that for the next week or so.) But when I got home that day and looked up the song, I also found a recent remake by the lead singer, Dean Ford. It is much more compelling from an older voice and now the song centers me and brings me comfort. I hear it now as a rueful acceptance that life is tough and yet is still worth holding on to.

At the Joyful Flight exhibit, I was particularly fascinated by this mirrored hummingbird. The reflections caused its appearance to change depending on where you stood to look at it. At first, with all the green, I thought it was filled with holes and then realized instead it was covered in round mirrors. I want that to be me - not defined by cancer or what is taken from me, but reflecting back what is good and life-affirming around me. 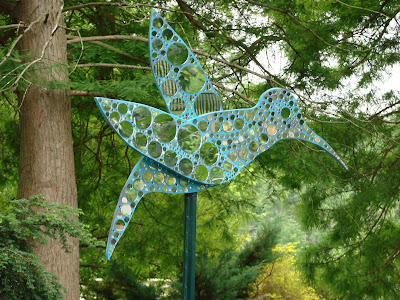 People have assured me that I am strong and brave enough to handle the path I find myself on.  I have felt anything but that. Then I remembered what I have often told my own patients - that being brave isn't about being unafraid. When you aren't afraid, courage isn't even required. Bravery is about doing what you need to do in spite of your fear. So I am leaning hard into my fear and moving forward. My first surgery is in the morning, and again I ask for your good thoughts to guide the hands of my surgeons and carry me through whatever treatment and recovery is ahead. Life has been brought sharply into focus for me and I hope to come out the other side of all this stronger and more appreciative of life in all its messy glory. 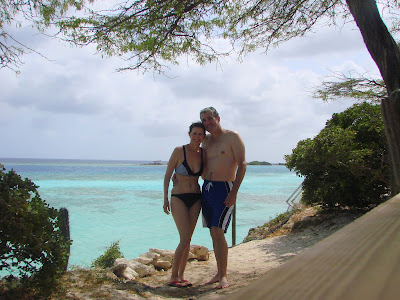 So just briefly... we had a lovely time in Aruba, and made it back home (flight delays, blah, blah, blah) this morning instead of yesterday. But the travelogue will have to wait - we have things we need to do here this weekend to get ready for Monday's surgery and my son and his fiancée coming over Sunday. I will do the Aruba posts when I have nothing but time in a week or so.
Posted by Secret Agent Woman at 3:30 PM No comments: 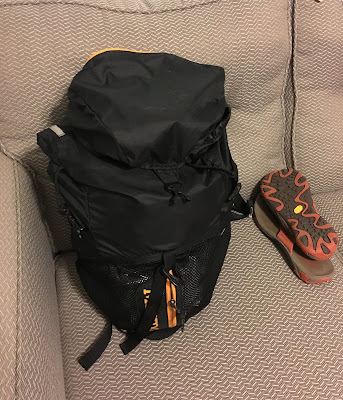 Prior to my diagnosis, we'd planned to take several days to go to the beach and our airfare and room were already paid for. As it happened, it was precisely when they'd have scheduled my surgery. We asked and the surgeon said, "Go." One week wasn't going to make a difference and I won't be going anywhere for quite awhile afterwards. So we're listening to her and heading out. Since the airline charges even for carry-on baggage, we are both taking only one "personal item" (a bag not to exceed 18 x 14 x 8 inches, including handles) and travel lightly. I plan to spend the next six days eating good seafood, staring at the ocean, and trying to get myself into a mental space for what's ahead for me. Back in a week.
Posted by Secret Agent Woman at 9:30 PM No comments: