These are a few of my unfavorite things.

Two blog friends, Bijoux and Ron, did recent posts on things that annoy them. I decided I had to join in the crabbery. I tell you, I am rapidly edging my way toward shaking a cane in the air and yelling at kids to get off my lawn. 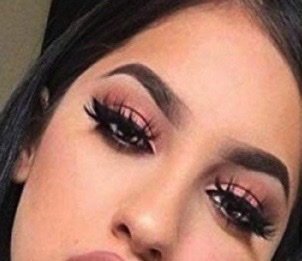 1. Since Bijoux started with Billy Eilish, I am starting with silly eyelash. The other day we went into a granite store and when the saleswoman turned around, I'm afraid I visibly recoiled. She had such long fake eyelashes and colored-in fierce brows that she looked startled and maybe a little frightened. Which stands to reason, I suppose, when you have dozens of tarantula legs glued to your eyelids. All I knew was that I could not take her seriously enough to work with her. But I don't get it. I'm fine with eye makeup, but not to such a clownish extent that it no longer bears a resemblance to anything natural. And on a related note, "influencers." People who are famous, or believe they are famous, because they have a lot of followers for their self-absorption on Instagram or TikTok. The writhing, the vocal fry, the rising inflection - I hate it all. And when I see someone endlessly mugging for selfies in public I just cringe. Why are people not embarrassed by their own behavior when they do that? 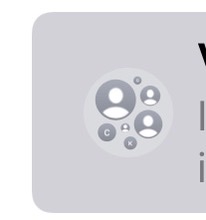 2. Group texts. I do NOT want to be included in group texts. My baby sister recently had her 40th birthday and her husband asked family and friends to send video greetings. Which I reluctantly agreed to because I do love her. Then she sent out a group text after 9 PM to me and 17 other people. This old person was already asleep when the first ping woke me. After several more alerts from various responders, I turned my phone to silent but the vibrations continued to wake me. I finally got up and put my phone in another room, where the volley of texts continued until almost 11 PM. The only legtimate use for group texting that I can think of is when you and more than one other person are coordinating a get-together. And related to this one, zoom get-togethers. I don't mind one-on-one video things. Hell, I do that all day long for work. But the ones where you and a bunch of other people are awkwardly trying to have a social conversation where it is impossible to tell when it is reasonable to talk? That's not remotely enjoyable to me. And business zoom meetings are bad for another reason - I don't want to have to watch people listening to a speaker or be on camera myself as an audience member. Not long ago I was attending a professional meeting and one woman was in workout gear and walking on a treadmill the whole time. I don't need to see that - exercise on your own damned time. 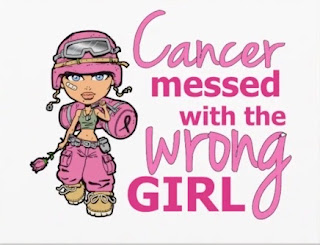 3. Pinktober. For a whole host of reasons, I find it offensive. Look, we don't need "awareness," we need a cure for metastatic breast cancer. Every single woman who is treated for early stage invasive breast cancer spends the rest of her life at risk for distant recurrence. And when it comes back as metastases, it WILL kill you. At that point, you move into treatment until you die. There is nothing cutesy about cancer, and all the celebratory, pink, "fight like a girl" bullshit makes me livid. First of all, girls don't get breast cancer, women do. And men. Adults. Secondly, going into remission isn't a sign that you are a particularly good fighter, any more than having it return means you aren't strong enough. It's fucking cancer. So no, when October rolls around each year, I won't be wearing a pink boa and entering races whose primary goal is to enrich the folks who run the organizations rather than going to research for ways to treat and cure MBC. "Save the TaTas?" Hell no, save the lives of women and men who are suffering and dying. THAT would be worth celebrating.

Posted by Secret Agent Woman at 5:01 PM No comments: 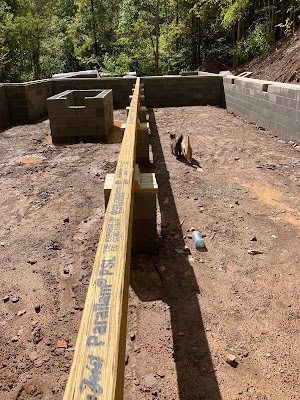 After the footers had been poured, it rained and rained. But finally, a little over a week ago, we went up to find the foundation was built. 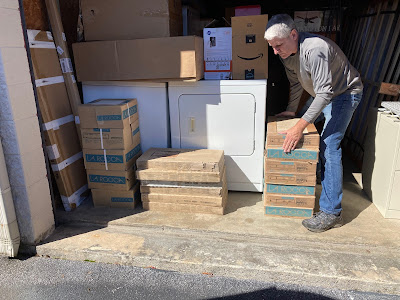 That lit a fire under us to start collecting up some of the remaining things we need. We had already had our builder pick up the bamboo flooring because we had nowhere to store it, but we did buy the tile for the two bathrooms and the laundry room and stashed them in the storage unit. I say "we" but I can't actually lift them. 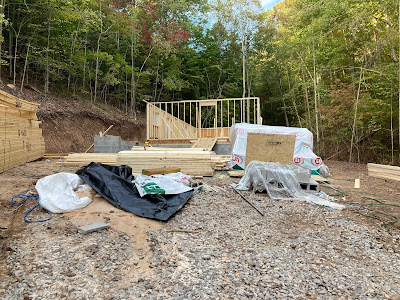 On Wednesday, we were thrilled to see the framing had started! 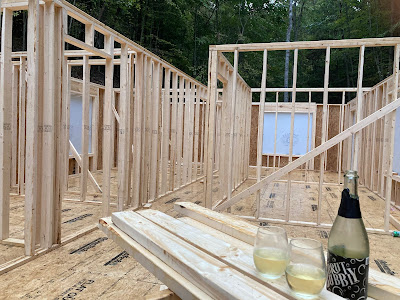 We came back the next day with a bottle of champagne from the local winery and toasted this new step. By that day they had started framing in the rooms, so we had to go stand in each one and imagine what it would look like. 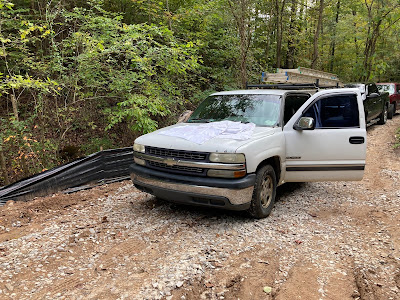 We went up again yesterday and the crew was working on the ceiling trusses. Those are the house plans on the hood of one of the worker's truck. 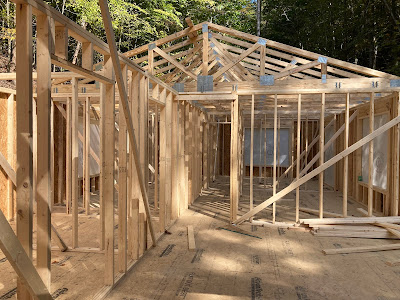 One little concern is that the kitchen is a good 5 inches shorter in width than on the plans. Which wouldn't be a problem at all except the cabinets are already built and waiting for us. I'm just trusting that somehow it will all be okay. 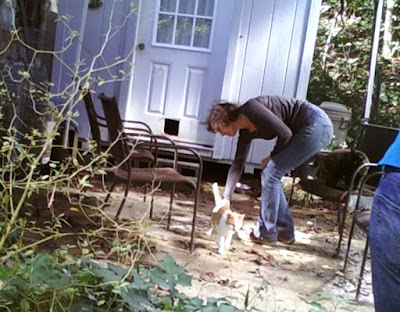 By the way, since I was asked - yes, Ranger does let us pet him now. He even climbed up on my leg when I was kneeling on the cement pad so that I could scratch his head. Picking him up is still a no-go though. 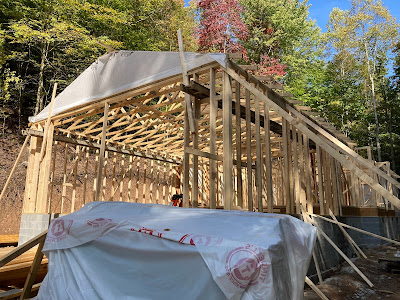 There's a lot of rain again in the forecast next week, so I know there will be another slow-down, but I'm starting to feel like this is really happening.
Posted by Secret Agent Woman at 4:59 PM No comments:

A tale of two kitties. 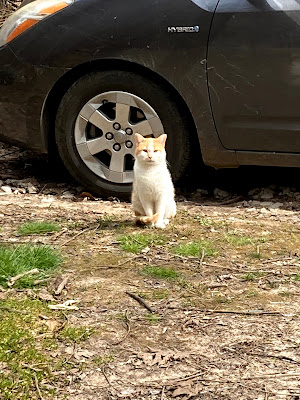 A little ginger feral cat joined us at the Ridge. I named him Ranger to stay with the Texas theme. The two cats seemed to have an uneasy truce. 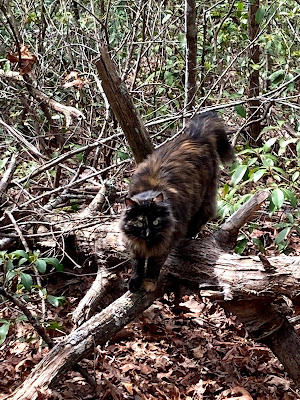 And then, shortly before my son moved away, Tumbleweed disappeared. Week after week we'd go up and call for her, hoping she'd reappear. Finally, we had to resign ourselves to the idea that she was no longer alive. I won't lie, I was heartbroken. She just had the biggest personality of any cat I'd ever known. 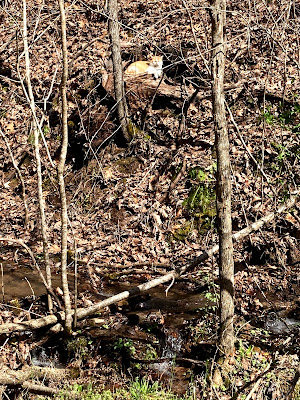 Ranger came around frequently but usually kept his distance. I would put food in the bowl in the shed and walk away leaving the door open. He'd skirt well around me and dart into the shed to eat. If I got too close, he'd bolt. I was glad to have him around, but he was definitely not a friendly cat. And I missed Tumbles. 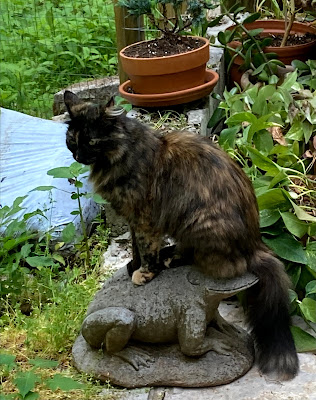 And then she reappeared! Acting like she hadn't been gone on a three-month walkabout. And I don't know how they worked it out, but the relationship between the two had changed. 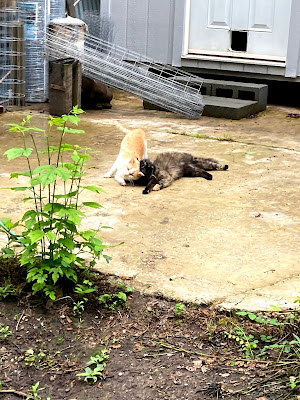 No more truce, it was full-on love. 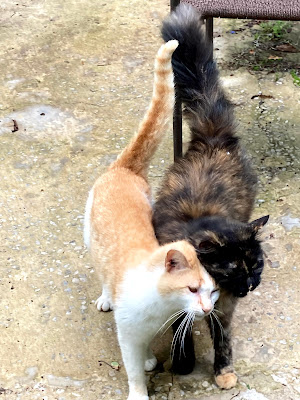 Mostly on Ranger's part. He just can't get enough of Tumbleweed. He stays pressed to her side like they are conjoined twins. 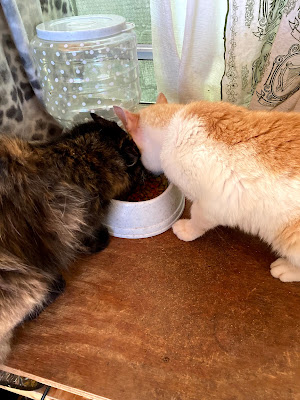 And she seems to be okay with that. They eat together without argument. 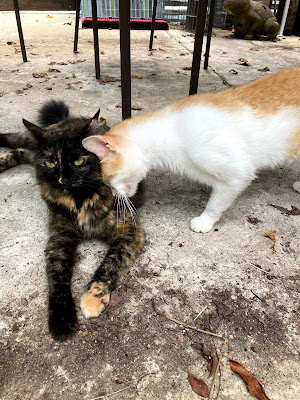 There are times when she appears to be tolerating him. 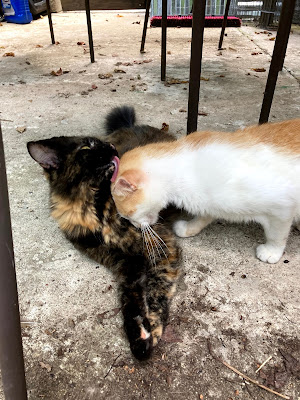 But then she will lick his head. I have a theory - when she first appeared, my son said there was a tiny kitten with her. And she had clearly had been pregnant previously when we took her to be spayed, even though she was barely old enough to have had them. The little kitten that had been following her never came around again, and we figured it hadn't survived. But maybe it did. Maybe this is that kitten, now grown. Maybe Tumbleweed in Ranger's mother. 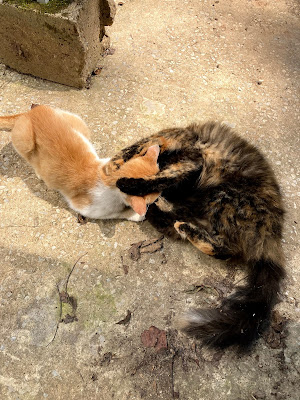 He meekly accepts it when she gets rough with him, 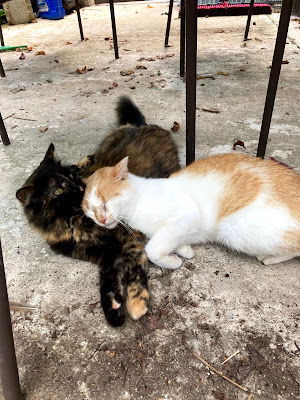 and goes right back to cuddling up with her. Whether that's what she wants or not. 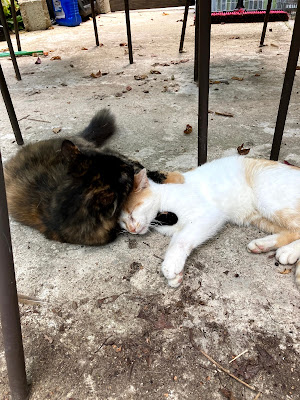 And clearly, she loves him back. So yeah, we have two cats now.
Posted by Secret Agent Woman at 10:53 AM No comments: 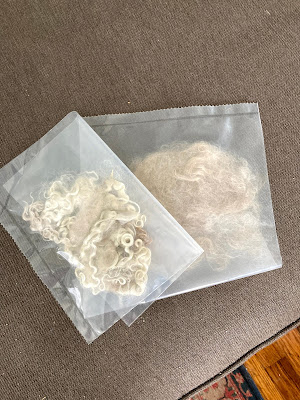 Many months ago, a friend sent us some samples of wool from his angora goat, one unprocessed, one carded into mohair. I set them aside, feeling like there was an art project there, but I just wasn't sure what it would be. 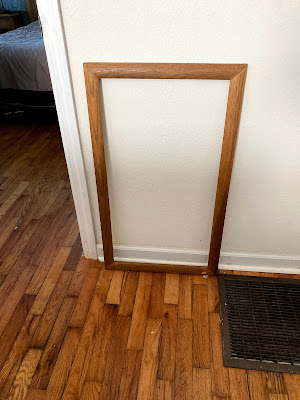 In the meantime, the idea for a wall hanging had started to crystalize in my mind. I bought an oak-framed mirror at Goodwill for $4.99 and took the mirror out. (It's actually a nice beveled mirror, so I'll use it in the house.) 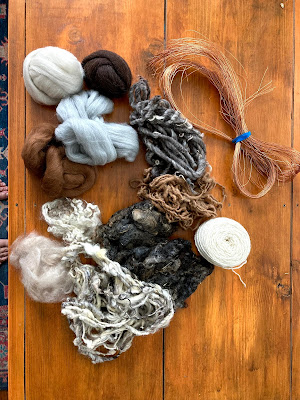 I had found a big piece of electrical wiring and peeled off the plastic to get to the cool thin copper strands inside. Then I ordered wool from places I'd been - Quebec, Iceland, Argentina, Ireland, Australia. All of it in undyed natural earth tones of sheep and alpacas. 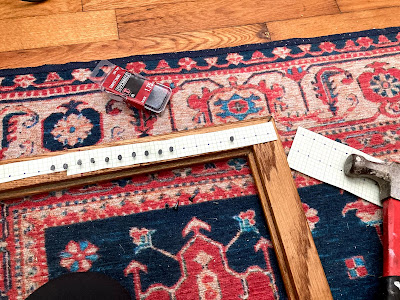 Then I started building the loom. I made a template and then I hammered in little carpet tacks along the top and bottom of the back of the frame. (Incidentally, not my rug - it came with the rental. I'm more a neutrals person.) 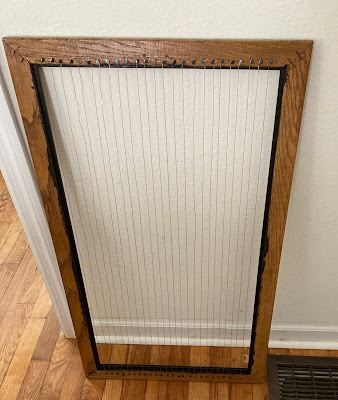 I strung copper wires from one end to the other, then finished hammering the tacks down to hold the wires in place. I watched a YouTube video on making a loom from a picture frame with yarn, so this was a variant on that. 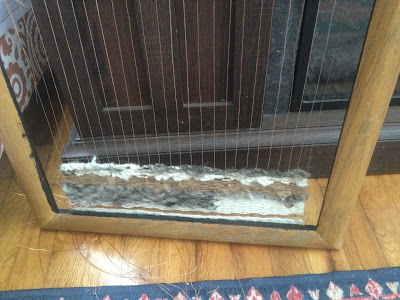 Then started weaving. I had absolutely no idea what I was doing, so there was some trial and error as I figured out how to work with the various fibers. 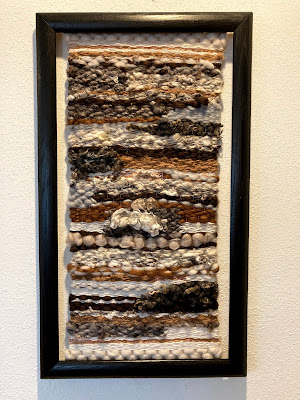 The finished wall hanging, with the frame painted black. I tried to make the lines a little curved to mimic the granite we chose.

Posted by Secret Agent Woman at 6:15 PM No comments: