And... Quaker at the Gun Range. 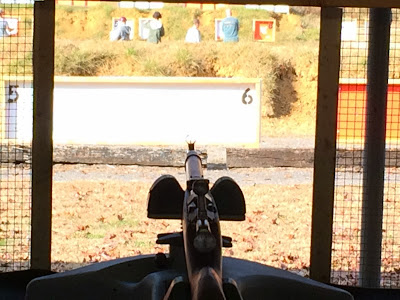 Naturally, now that my younger son owns a rifle, we had to go shoot it. On Saturday, we drove into town to a range run by the wildlife resources agency. Straight ahead in the green jacket is my son pinning his target at the 50 yard mark. Is it just me or does the end of the gun in the stand look like a sad face with a Yosemite Sam-style mustache and Dumbo ears? 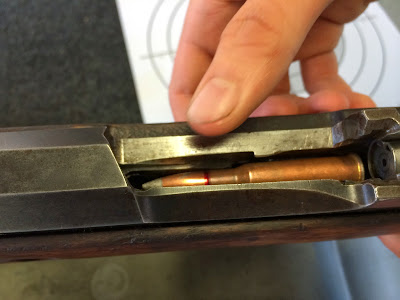 There were strict safety rules. Ear and eye protection were required a good bit before you actually reached the range, and we had a briefing by one of the volunteer range officers. We had to wait behind a red line until the next cease fire, gun unloaded and tabled. The range officers were very friendly and helpful, but also quick to call someone down if they broke a safety rule. The man at the end of our row approached his gun during a cease fire and I heard the officer shouting, "Sir!  Sir! Step behind the red line!" He went on to explain, firmly, that when people see someone approach a gun while they are on the range, no matter what you are actually doing, they get understandably nervous. Finally everyone was safely back inside, the warning lights turned off and they announced, "The range is live, fire away." Yes, I was a little creeped out. 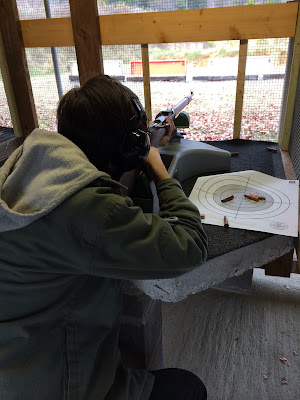 I only fired three times, to try it, and mostly stood behind my son watching. Even with the ear protectors on, it was bloody loud. My own target was just at 15 feet. I hit the target, but that's all I can say. The gun is so heavy I could not have shot it all if they hadn't provided us with a stand. 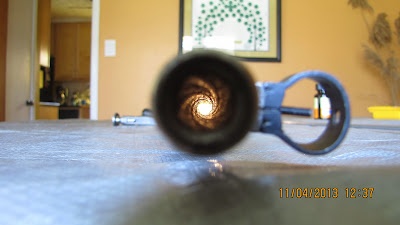 My son took this photo of the barrel after he'd cleaned it the first time. The inside still had some residue and rust, even after cleaning. Which I guess isn't surprising since it's an 81 year old gun. 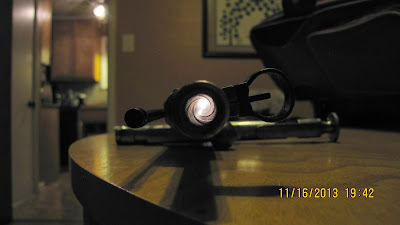 Shooting it, however, cleaned out the inside. It apparently knocks loose some of the residue.

And for your entertainment, this is me reacting to the powerful kick of the gun against my poor arm (the first several shots you hear are people around me):
And yes, more sushi was required to soothe the disturbance to my Quaker soul.
Posted by Secret Agent Woman at 10:55 AM