The push to get ready to list by April. 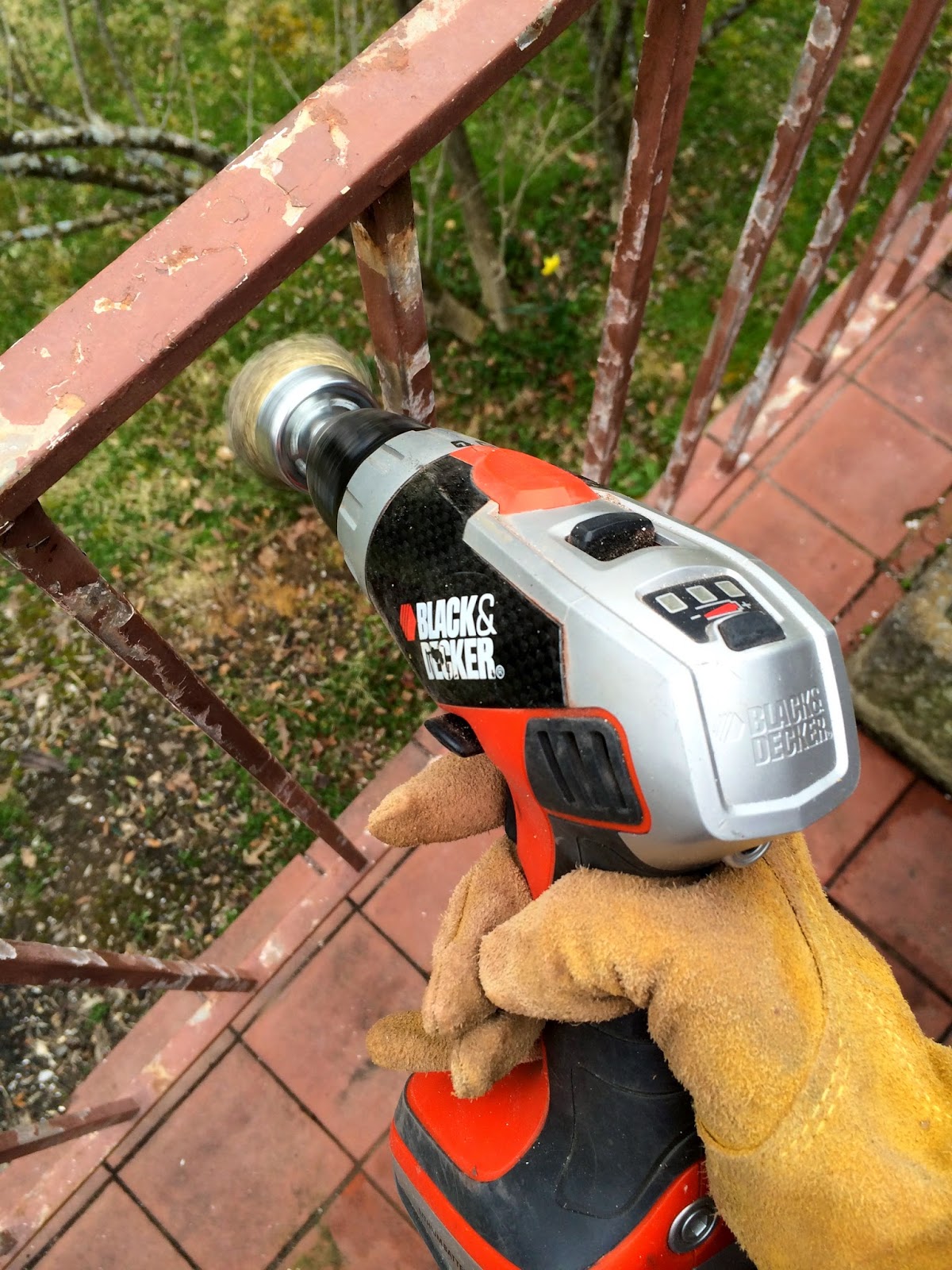 Over the last week and a half, I've spent every spare minute trying to finish off the projects in the house. After I'd cleaned up the deck, the peeling iron railing became painfully obvious to me. Along with the iron posts on the screened porch, the area under the deck, and the front steps. I bought a wire brush attachment for the drill to get as much of the flaking paint as I could and then re-paint. You probably have never heard anyone use the curse "stupid fucking curlicues," but you would have if you'd been there when I was working on the posts with curving metal parts.  But hours and hours later I was done. 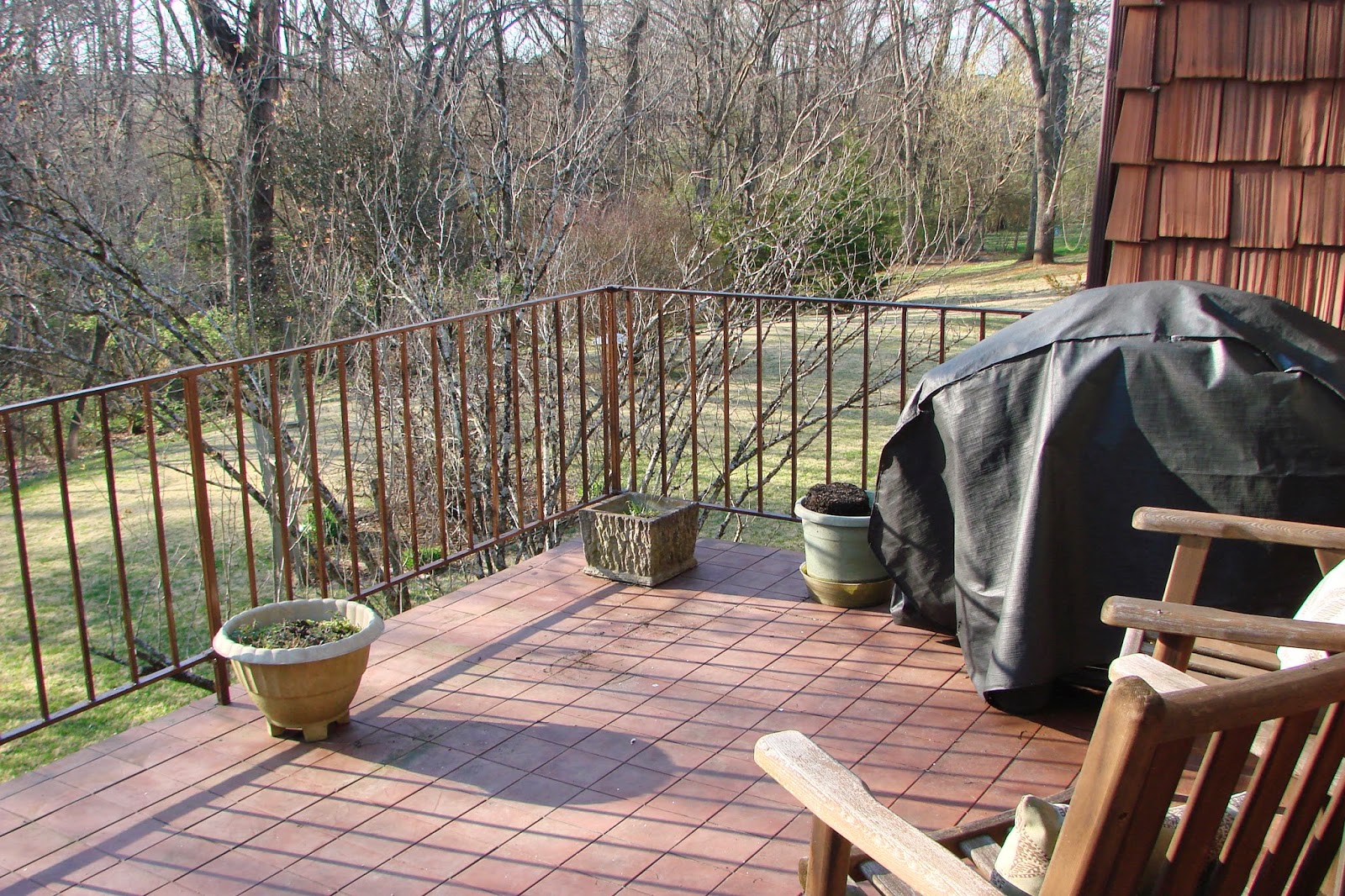 How's that for neat? Since I won't be planting herbs here this year, I removed all those pots and packed them away, just leaving a couple for basil and parsley. 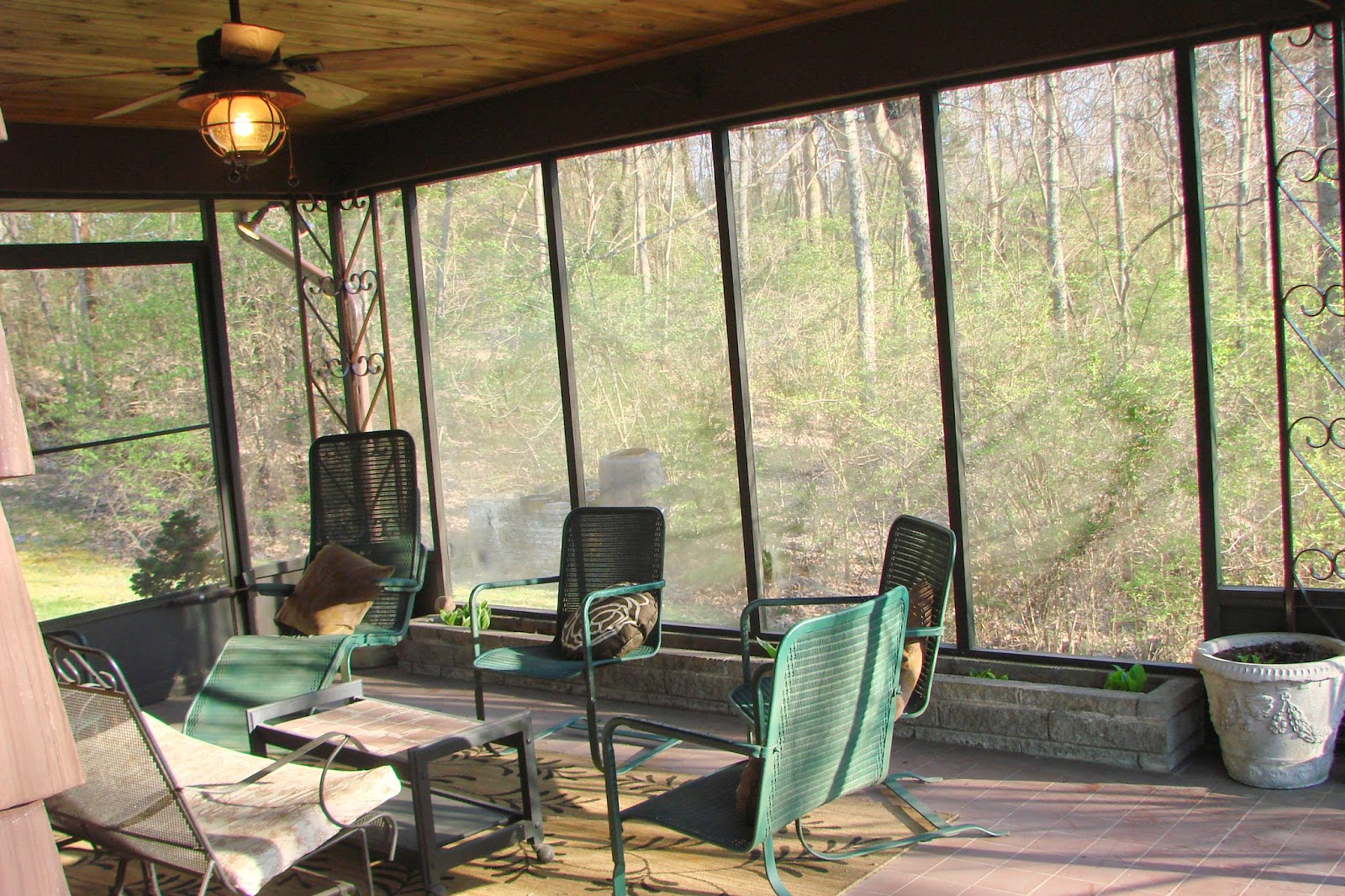 See those curlicues  on the post in the corner? Yeah, there were five of those posts to scrape and paint. I repainted the furniture, too. Fortunately the hostas are coming up in the planter boxes to add a little life.  I think the screened porch is one of the nicest features. There are woods on two sides, a nice tile floor and hardwood ceiling.And I added a really cool fan out there when I moved in. 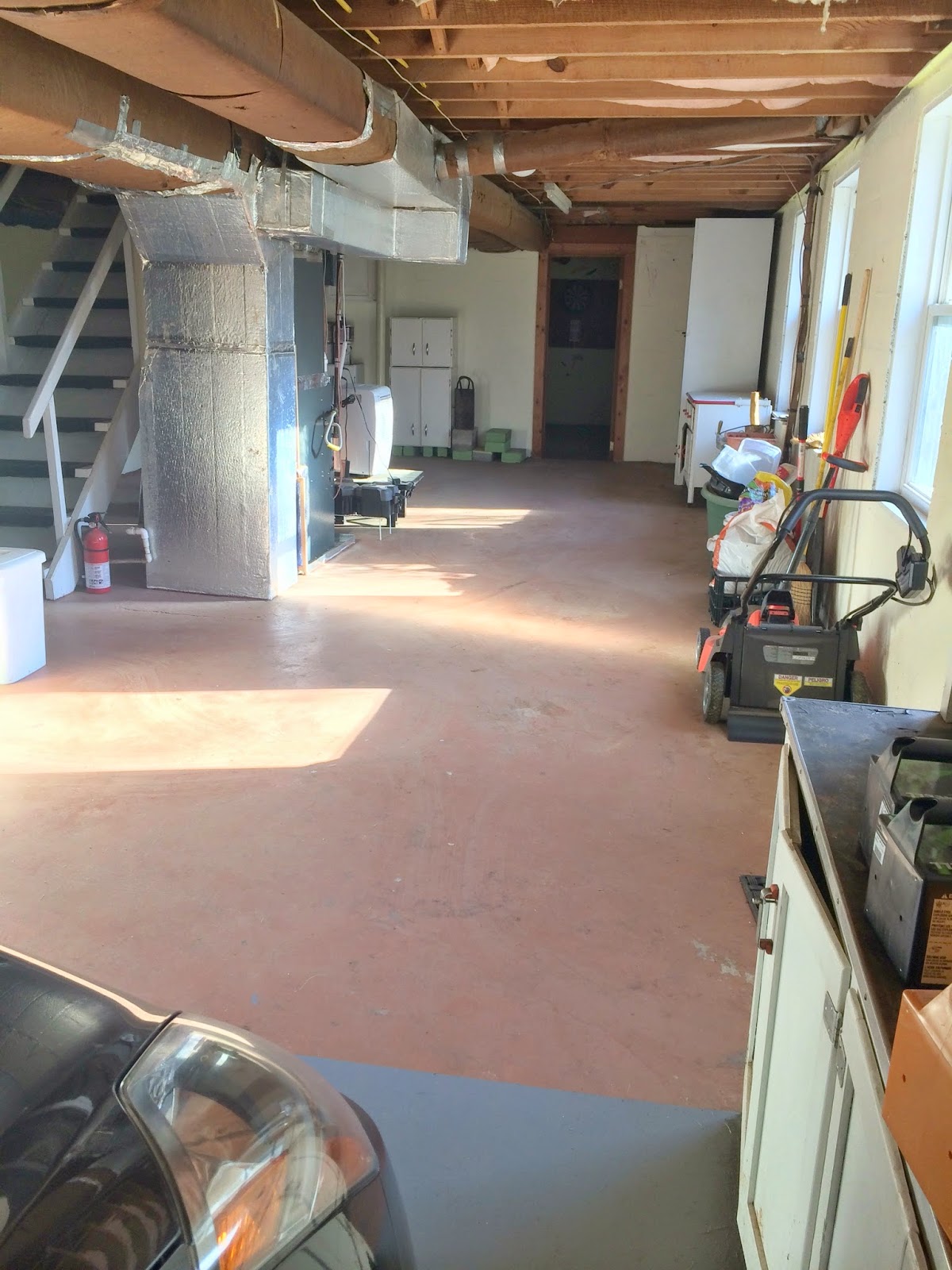 I also cleaned out the entire garage and basement. It's not glamorous, but there is all kinds of space. A hoarder would have a field day with this basement. Around the corner there is a cement platform with even more storage and when I remodeled, I put all the old kitchen cabinets in the basement for yet more storage. Through that doorway at the end, 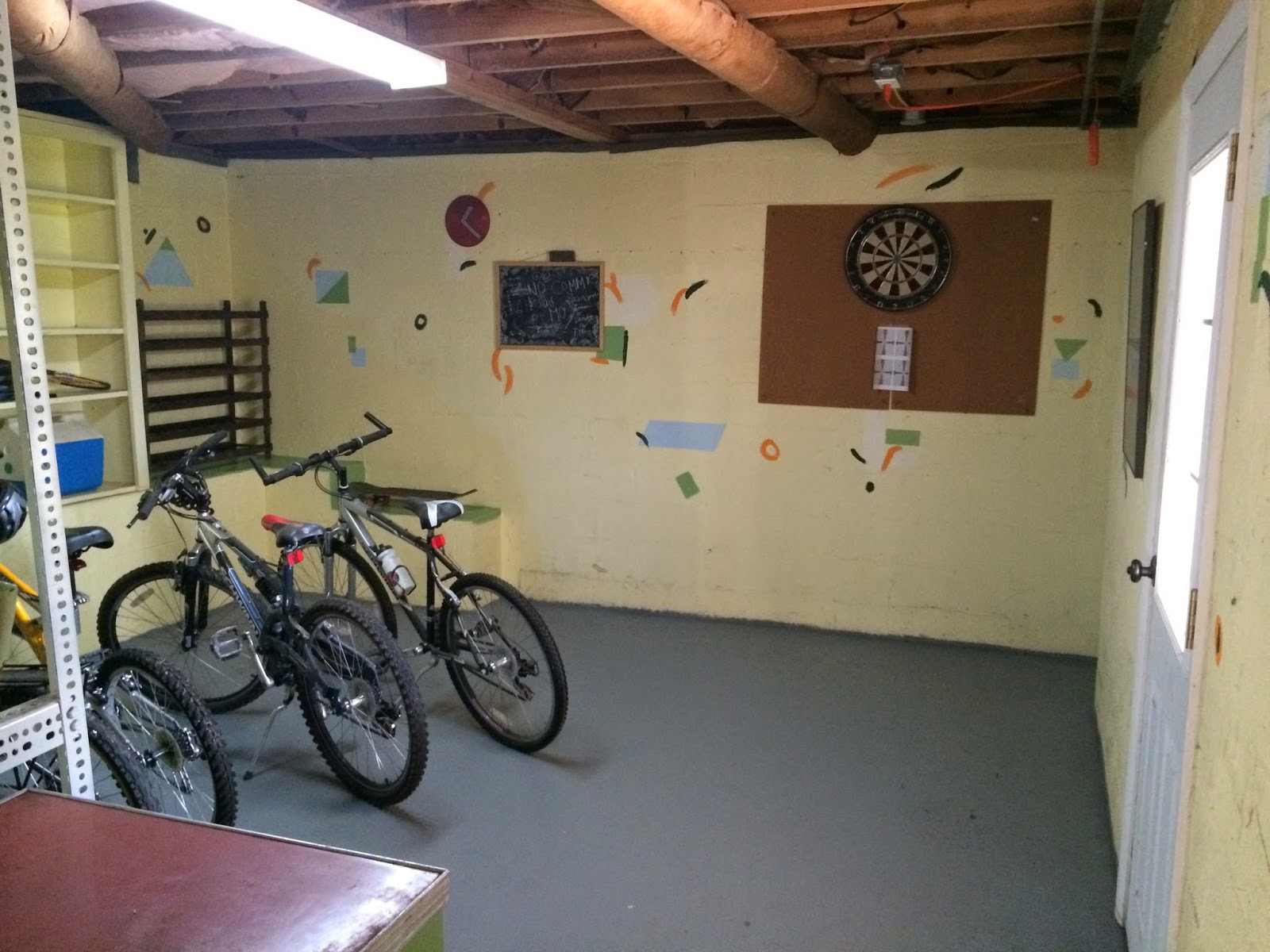 is a room we call the game room. Right now I have the bikes stashed in it. But again, storage. 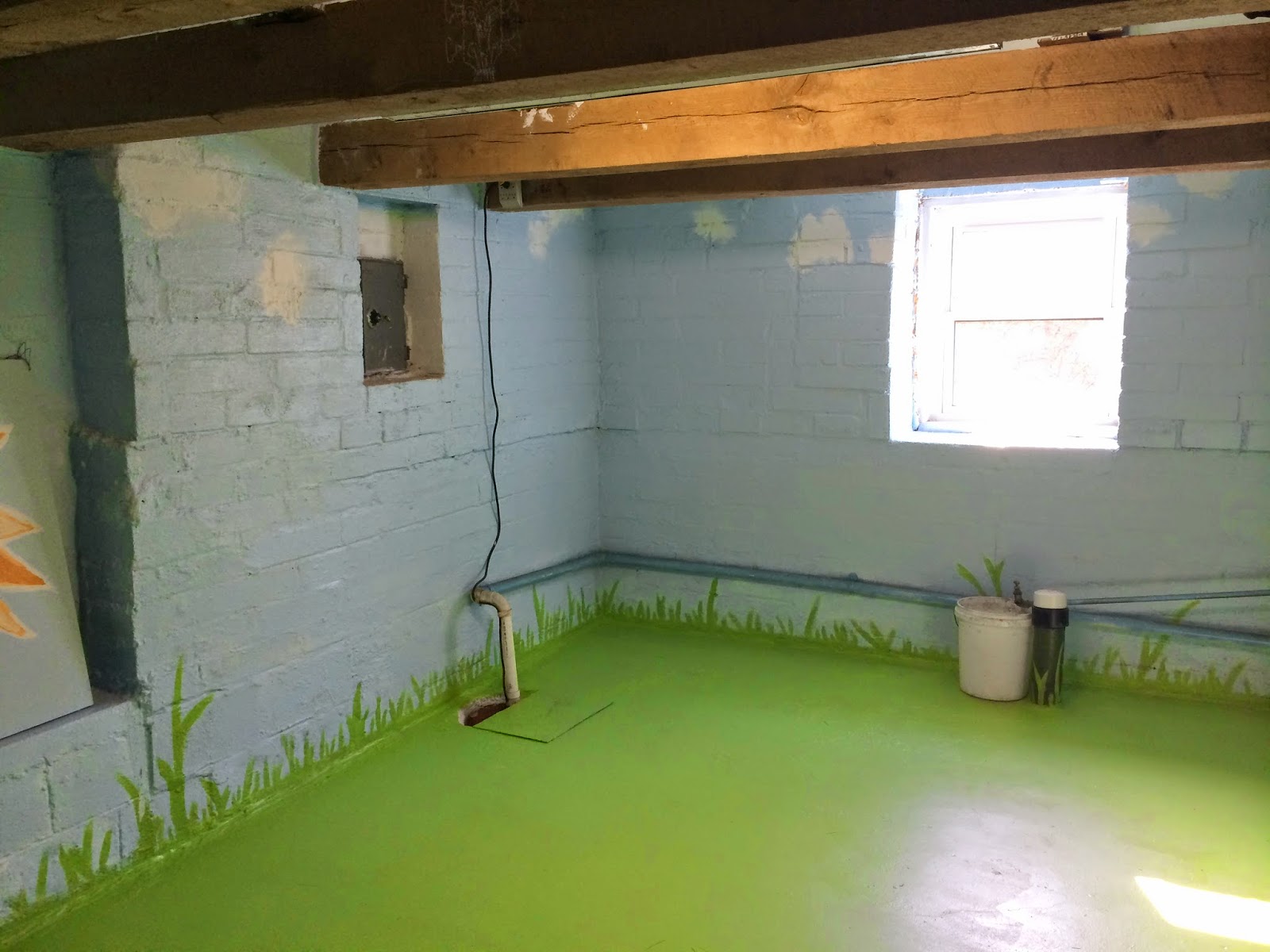 And then on into a bomb shelter. The original owners in a fit of cold war paranoia built it. A cement ceiling, thick support beams, walls a couple of feet thick, running water, a sump pump, and a built in wall safe. And bizarrely, a window. Go figure. I guess you could watch the mushroom cloud from it. I painted it to look cheerier and to take away some of the duck-and-cover feel to the barren gray room. And storage possibilities? Oh, yeah. 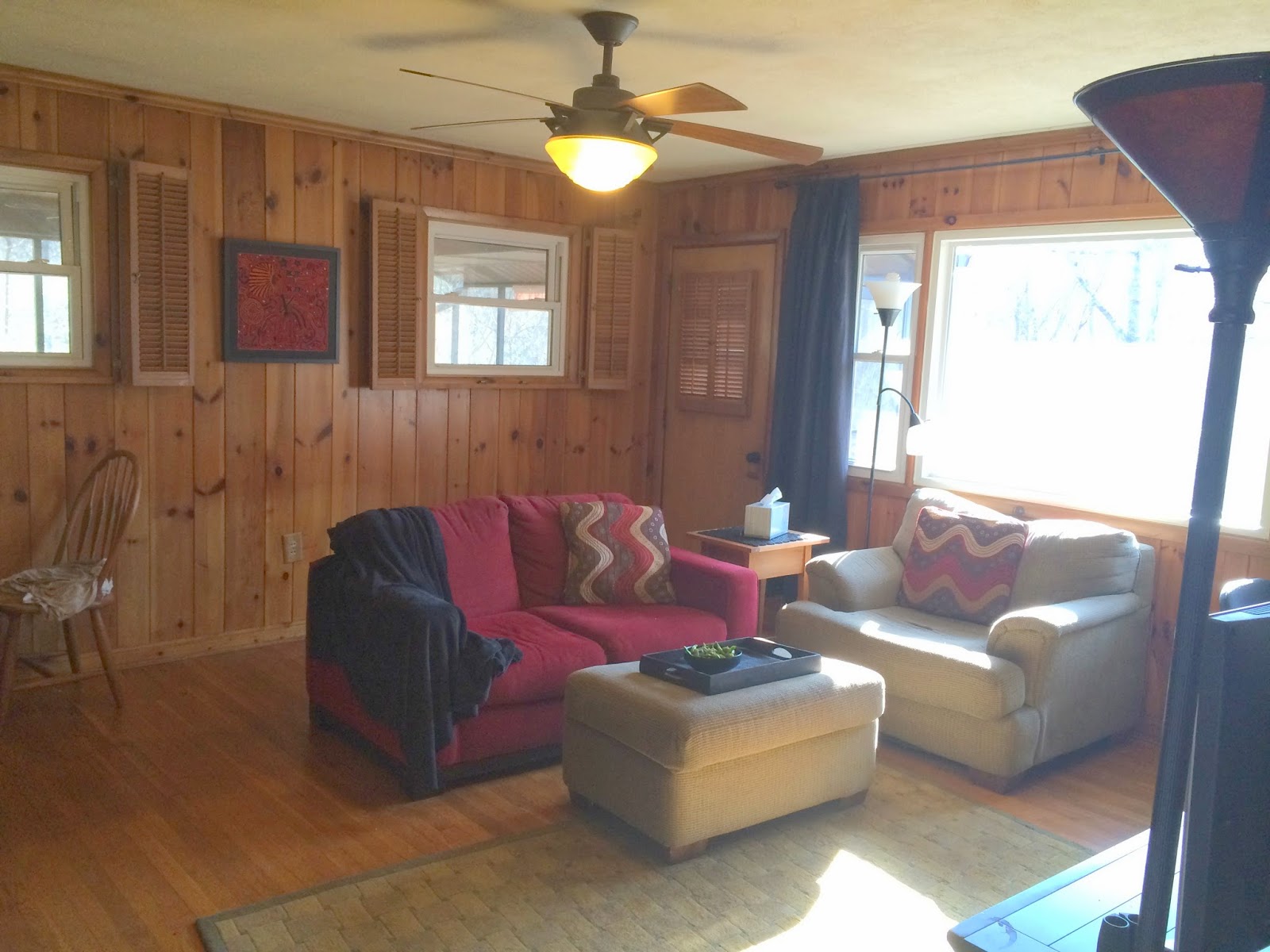 On to the living space of the house. Here, the freshly de-cluttered den. I removed the bookshelf behind the couch that held games and books and also took away the two spare dining room chairs that lived there so the path to the porch door is unobstructed. 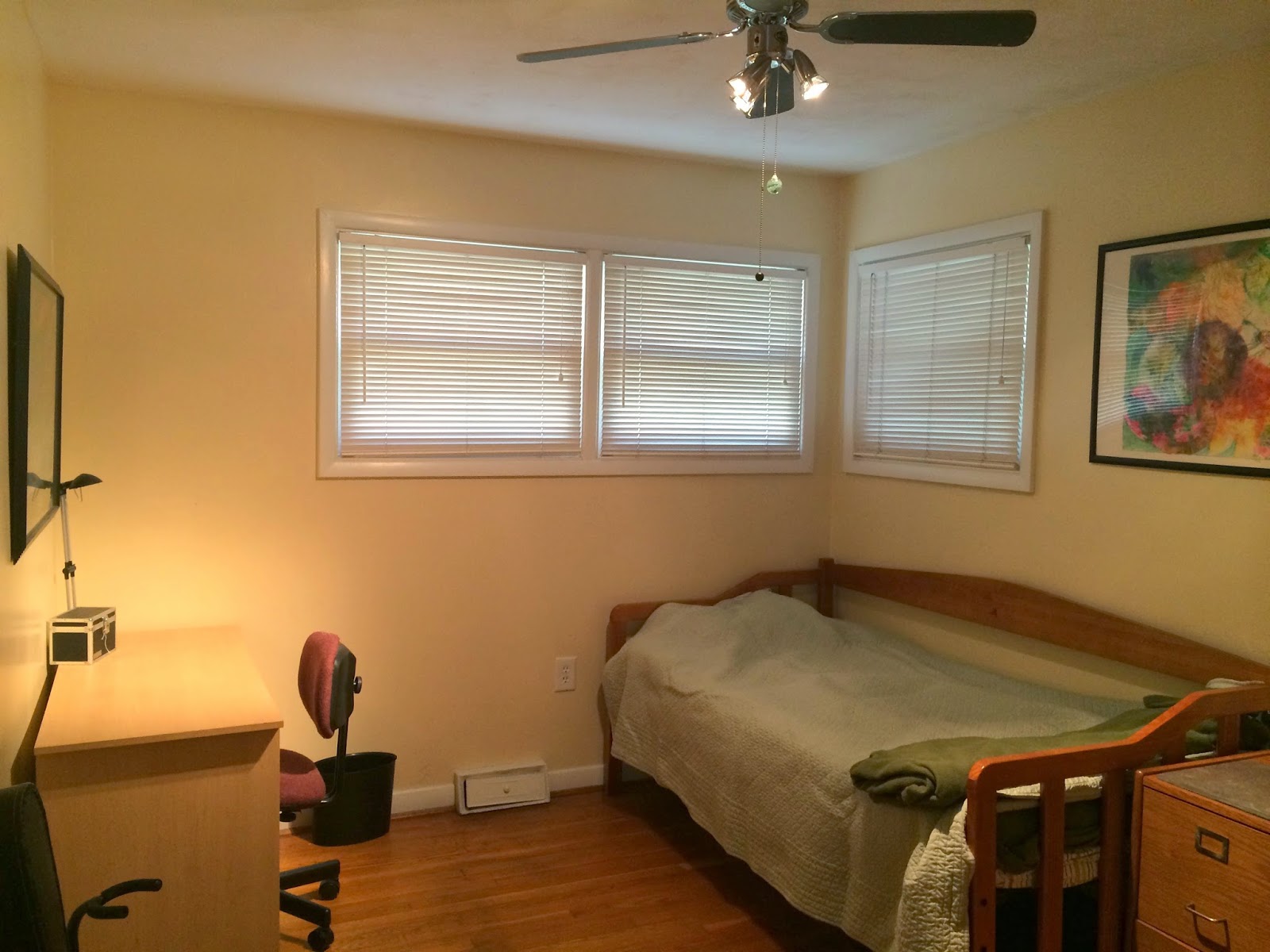 Both bedrooms are now a neutral color instead of the greens the boys picked out when we moved in. I left minimal art up - just enough to make it look spare but not empty. 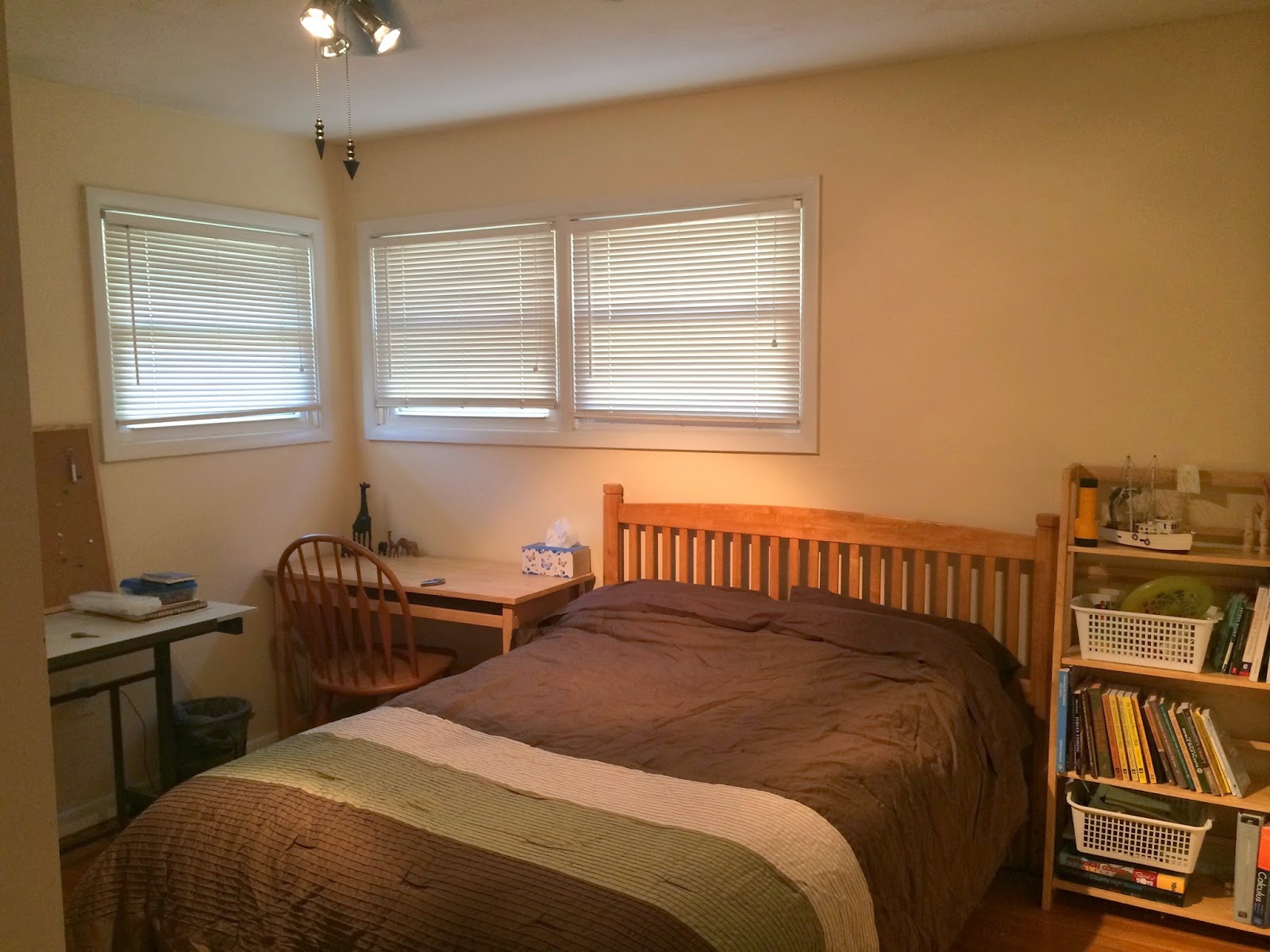 Same color in this bedroom, which belongs to my younger son. I can't clear it completely because he still has to live in it. 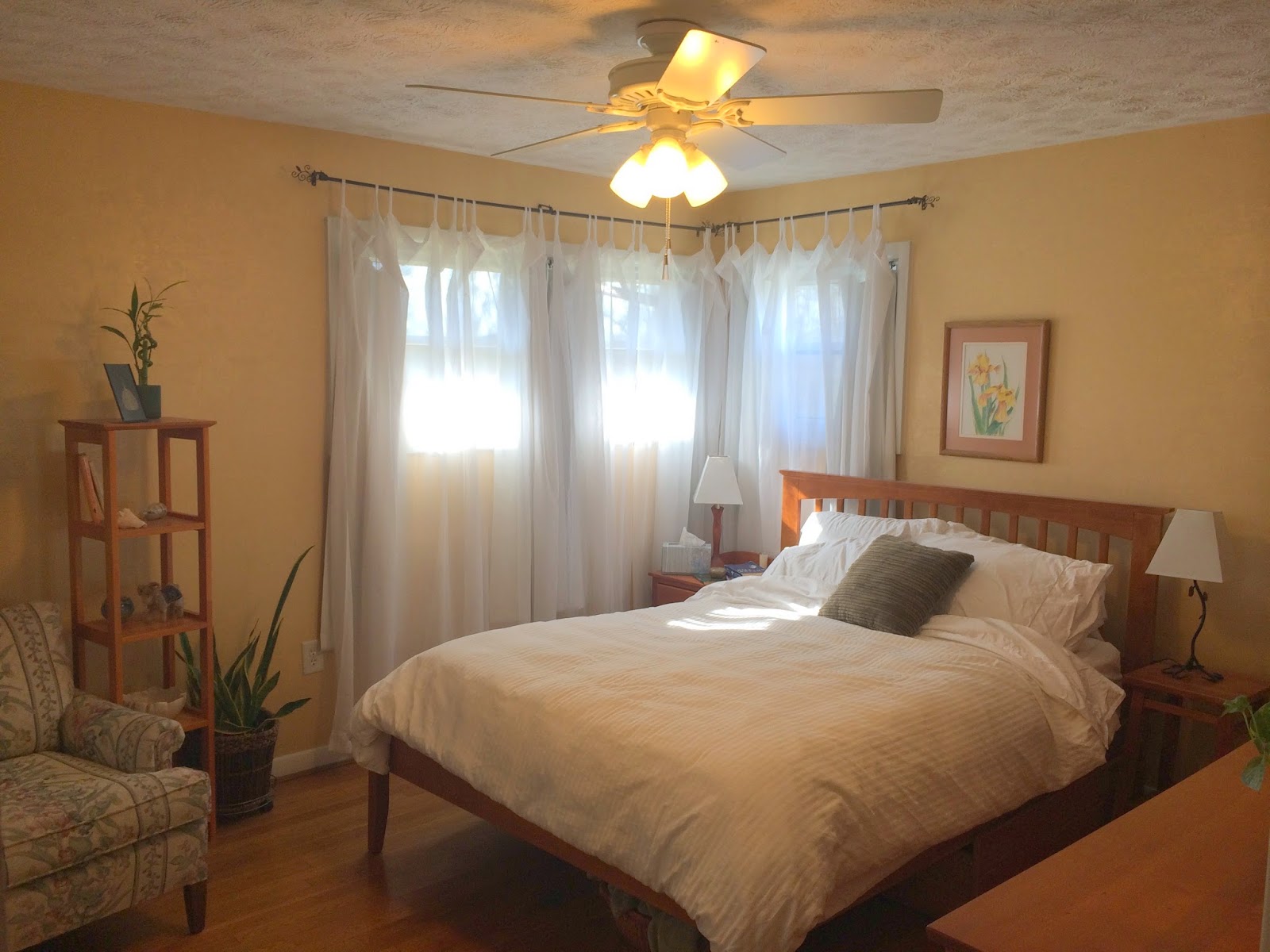 My room is also de-cluttered. I took down the carved gourd mini lights I had strung along the ceiling. I love them, but my taste is admittedly quirky.I'm told that the idea is for people to be able to walk in and envision their own things in the house. 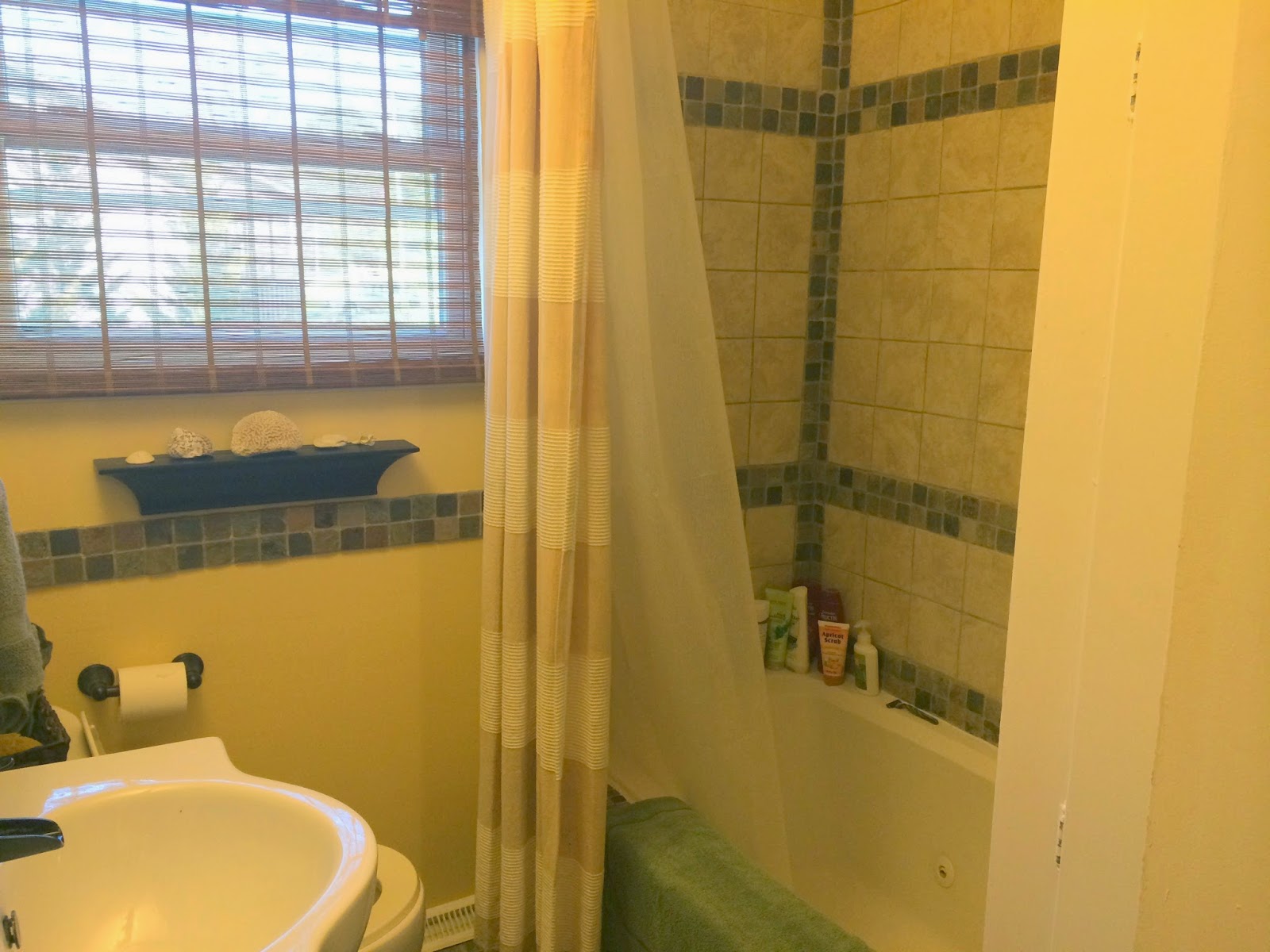 The main bathroom can't be changed much. But I did repaint it to make it a little fresher.  I'm hoping there will be folks out there who like the tiling I did. 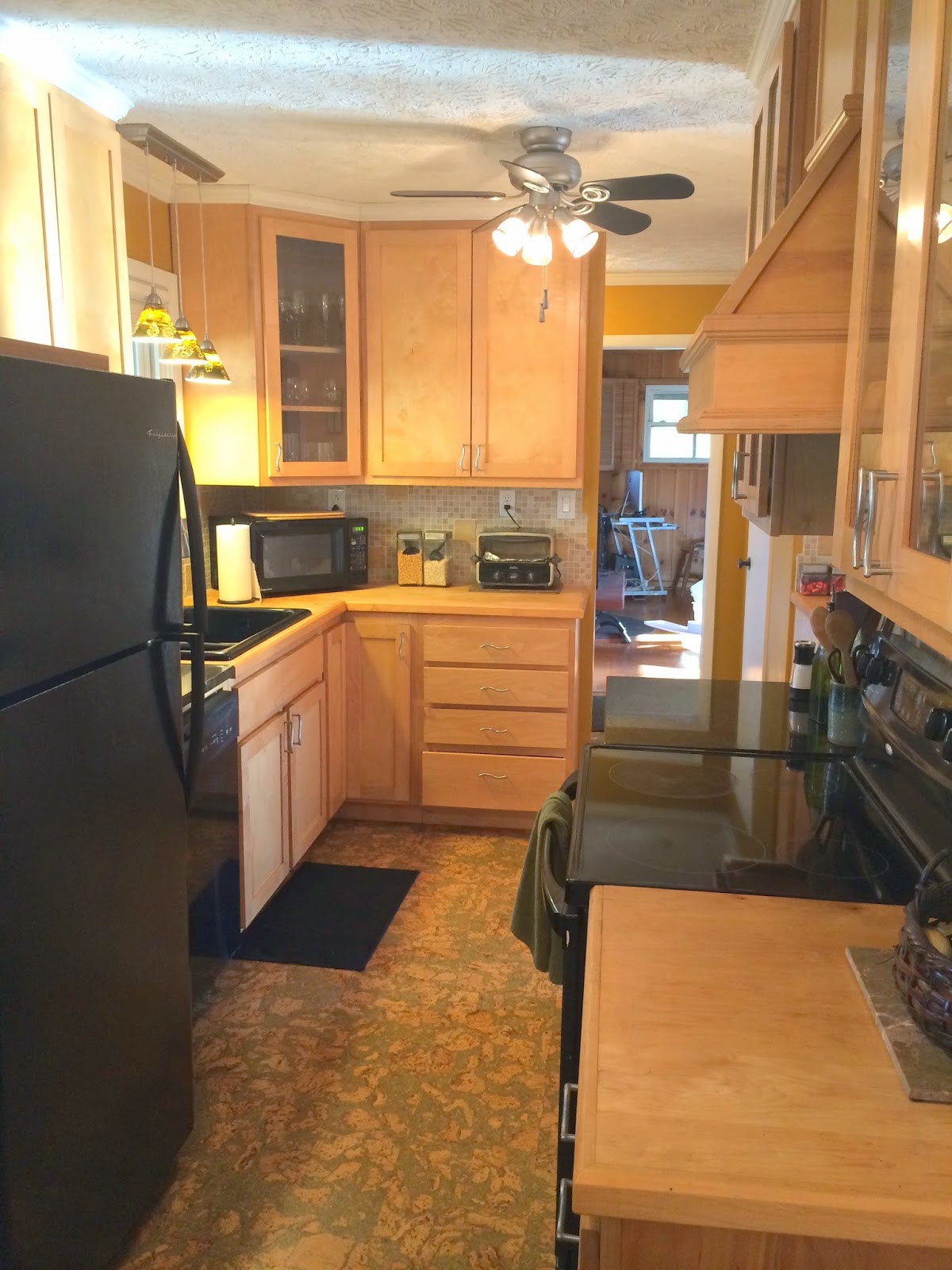 There wasn't much to do in the kitchen except clean. This is a room I keep pretty decluttered anyway. 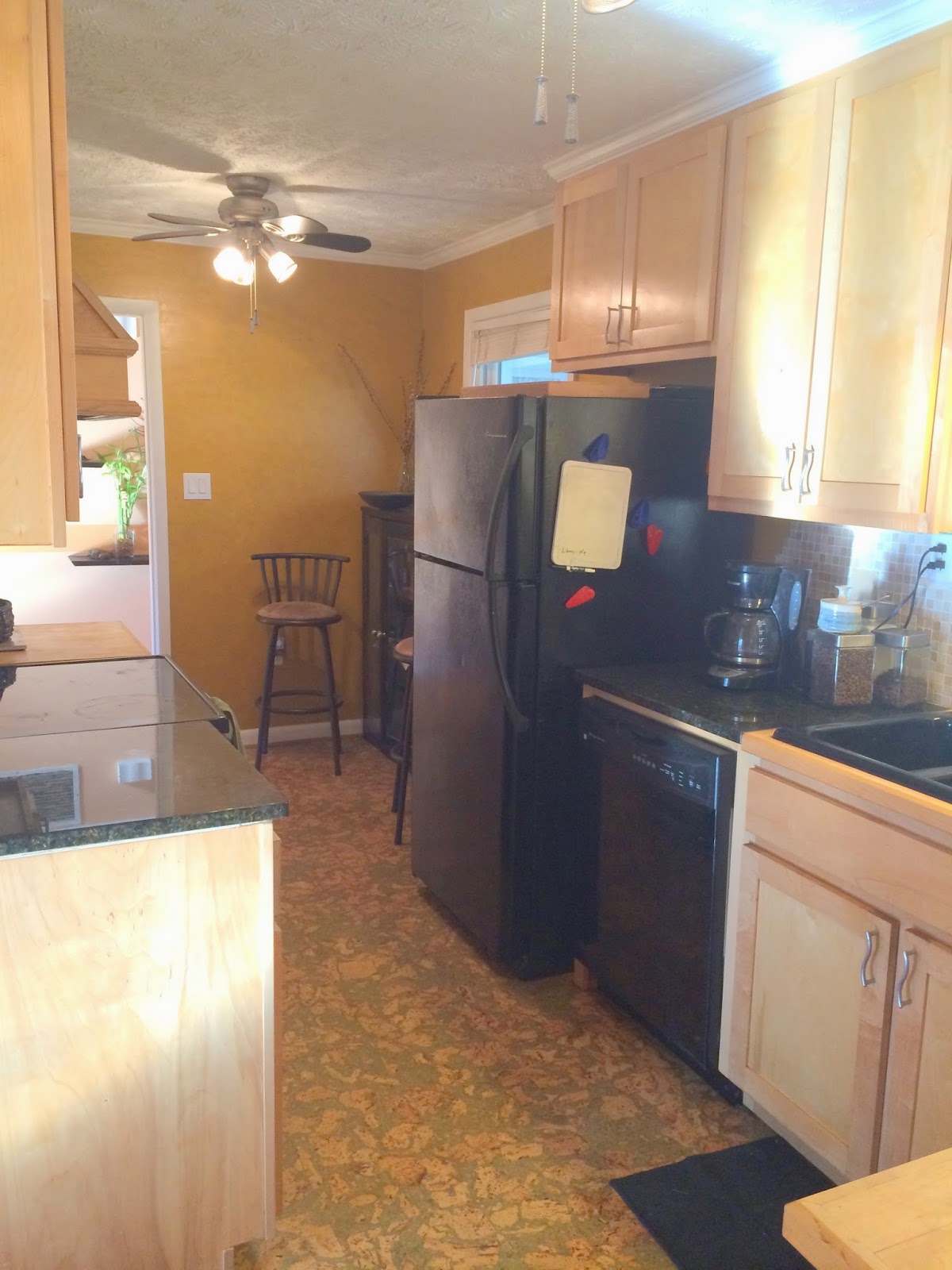 Except you see that empty space at the end where the chairs are? I was reading an article about what conveys with a house which said that anything that might be in dispute - i.e., something which is not actually attached but might reasonably be assumed to go with the house - should be removed before anyone sees the house. When I remodeled the kitchen, I also had a matching island built with a granite top. I love that table - it's the perfect thing for working bread dough, phyllo pastry or making cheese. So out it went. I stashed the slab of granite under my son's bed (after dropping it on my thigh and leaving a great bruise) and have the table loaded in the car to take to storage. 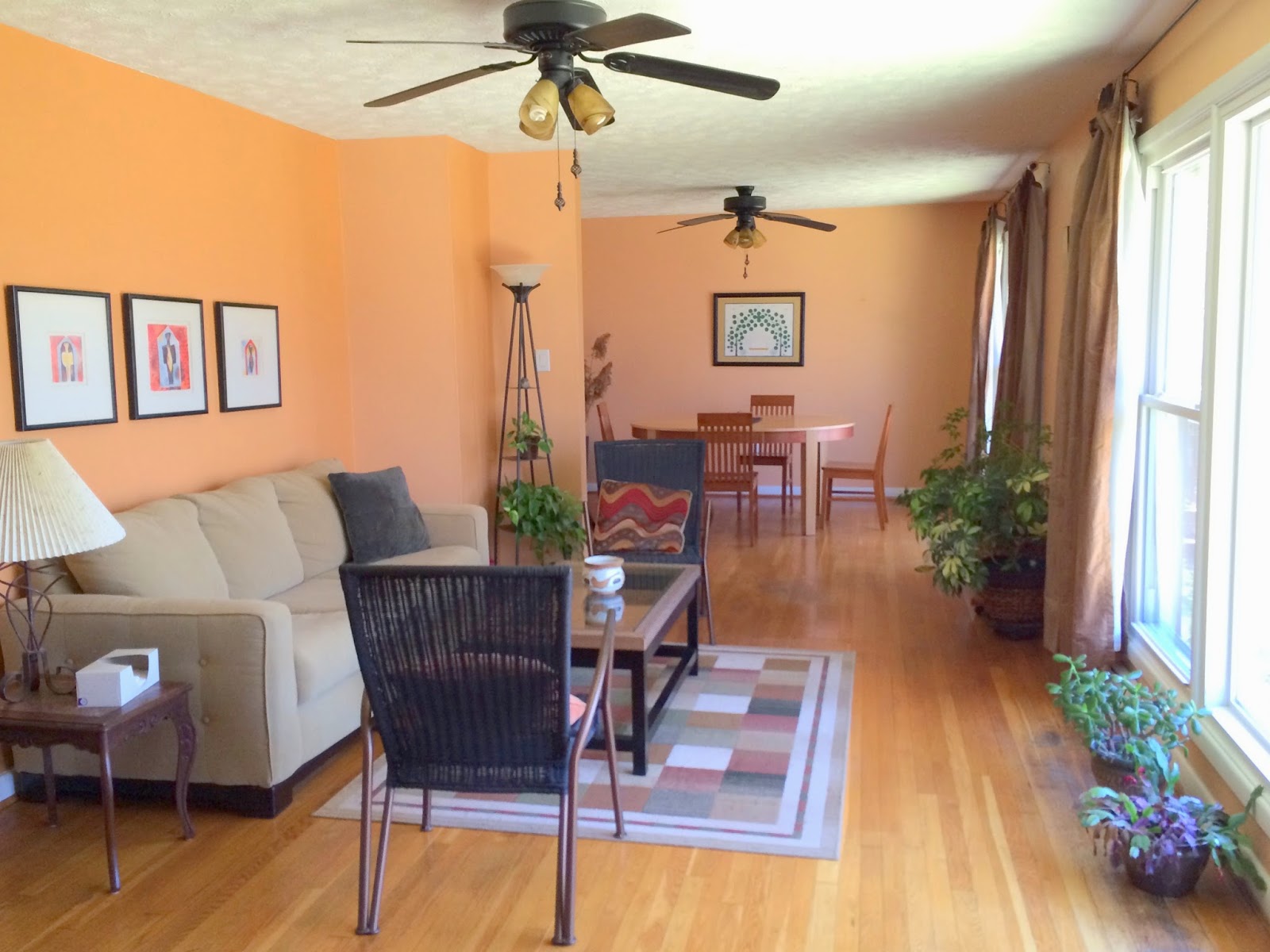 And finally the living room and dining room. I took out the book case behind the table and also stowed away a couple of chairs. And all the books not boxed up are on the one remaining bookshelf at the end of the living room. 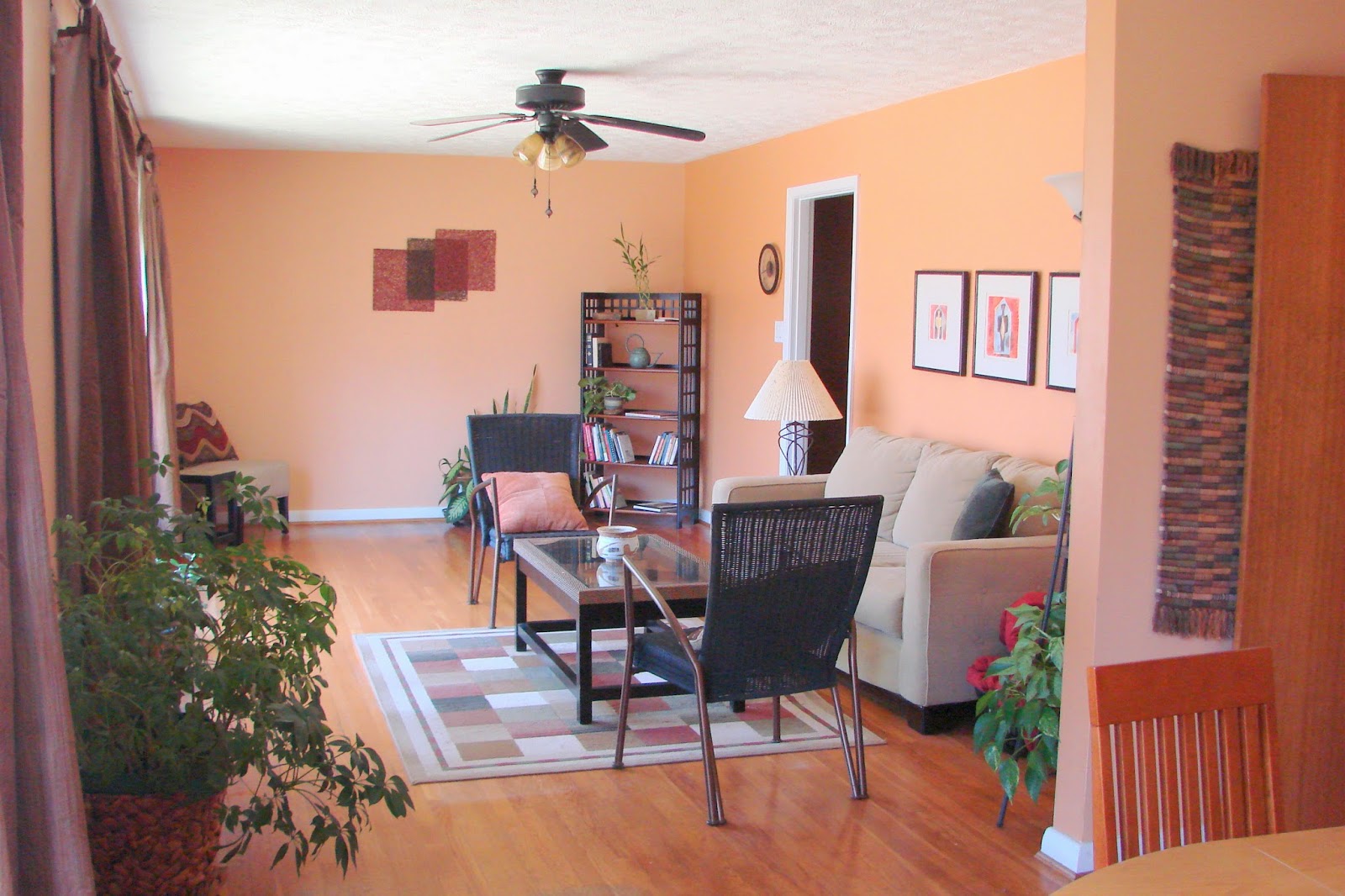 I met with a realtor yesterday evening. After touring the house he said it was "neat as a pin and in showable condition today." No recommendations for changing anything. So now I wait.
Posted by Secret Agent Woman at 10:21 PM