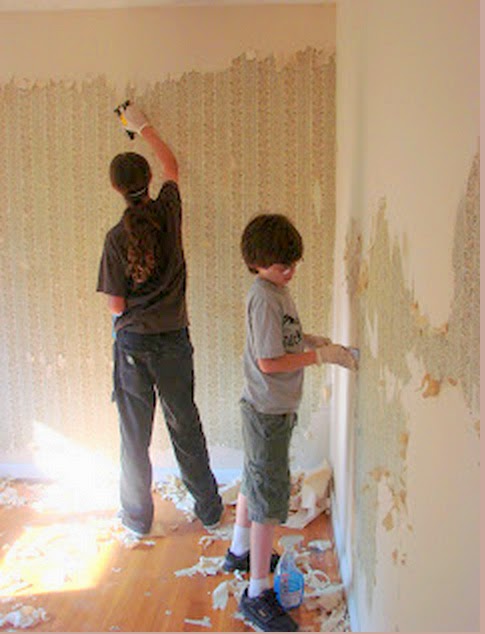 It seems like only a year or so ago these two were helping me with the labor of making this house our home. But it's been almost seven years, and the days when I was the tallest person in the house are long gone. Both of my sons now tower over me and help me with carrying heavy stuff, opening recalcitrant jars and lifting things down from tall shelves. 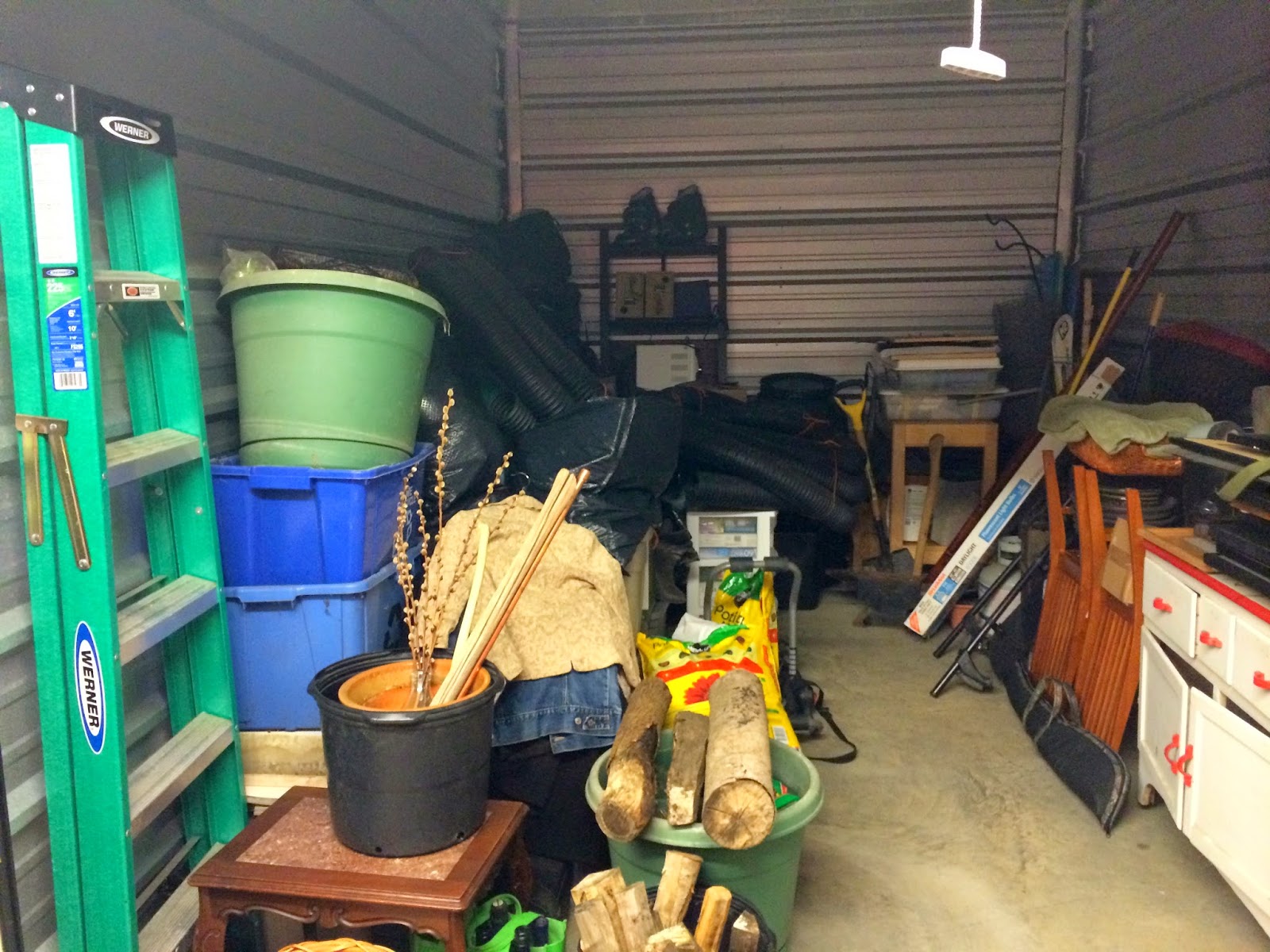 I never did fill up the full space of the storage unit but the third month's rent was the last I'll have to pay on it since I'll start emptying it out again next week. And probably end up sending a good chunk of its contents off to charity. Nearly every day for the past month, I've dropped things off at a local organization that gives things to people in need. 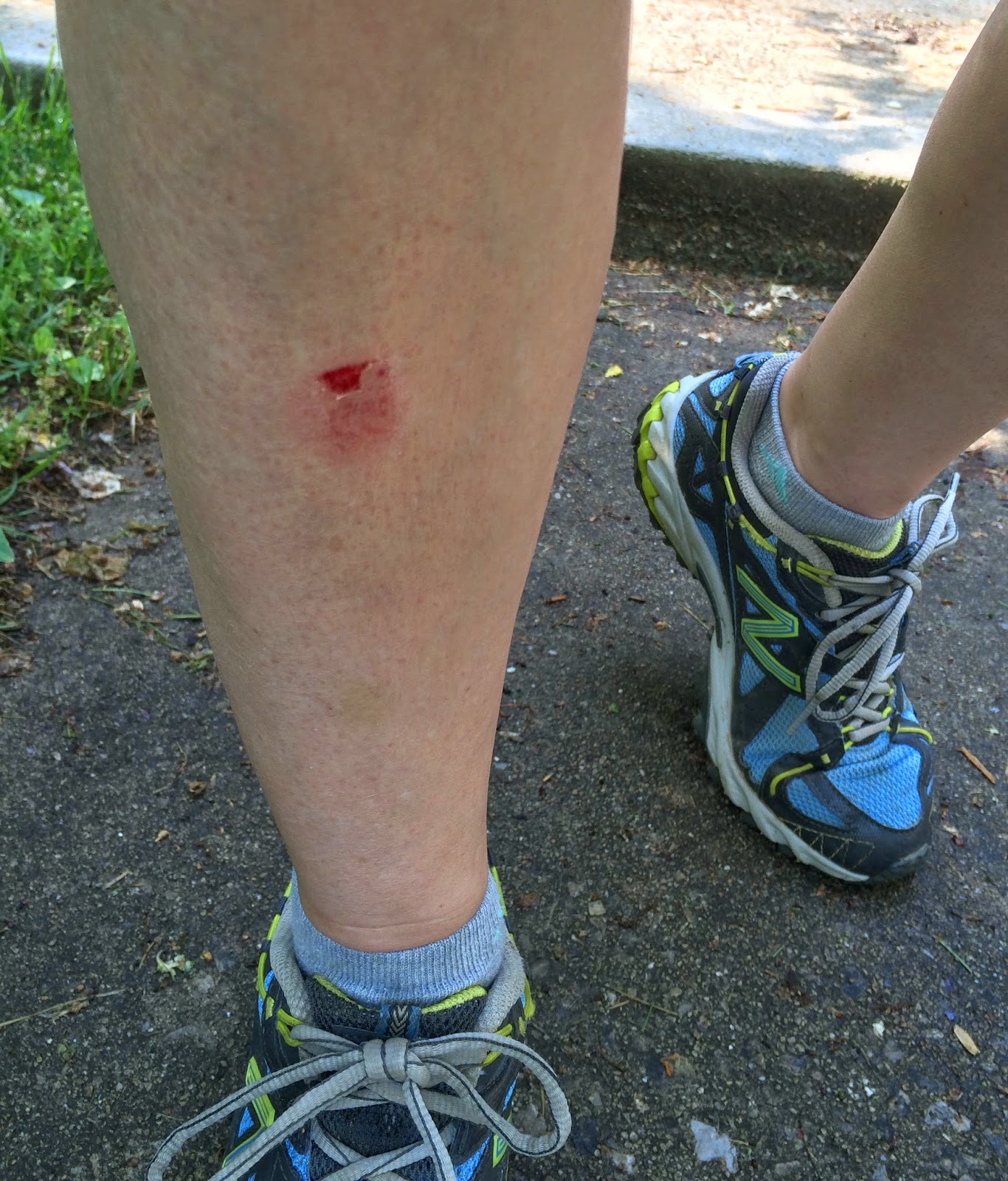 It's been freeing but not without its costs. The metal bed frame my younger son and I loaded into the car to donate took a bite of my shin. Clothes, furniture, linens, books, bicycles, kitchen items... the more I give away, the lower my threshold for seeing something as not worth hanging on to. 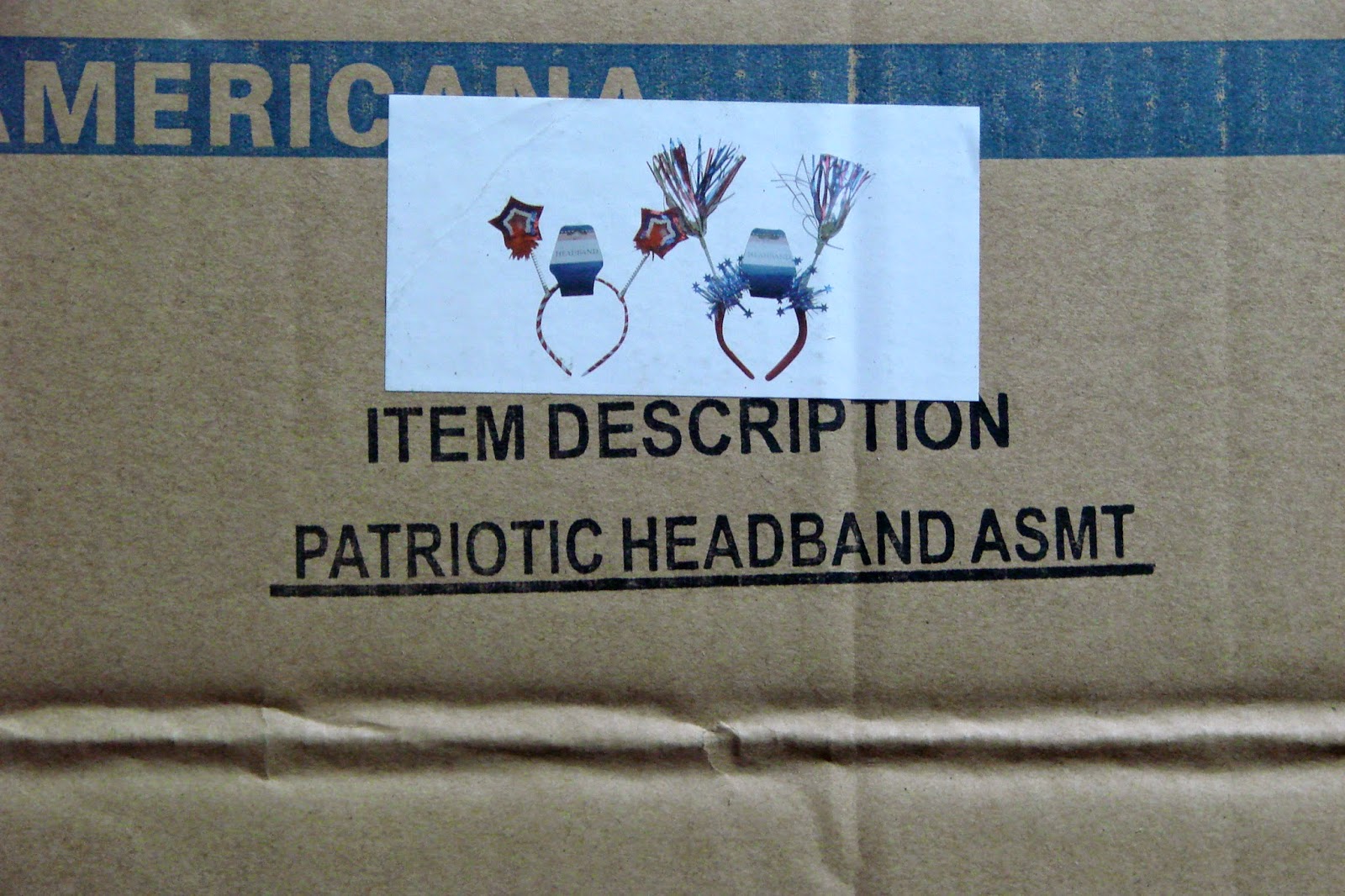 But I'm not going all Zen monastery, so I've been raiding (with the manager's okay) the recycling dumpster at a nearby dollar store for boxes. Which means my stuff all has silly labels now. Honestly, who in their right mind would feel the need to purchase a patriotic headband? 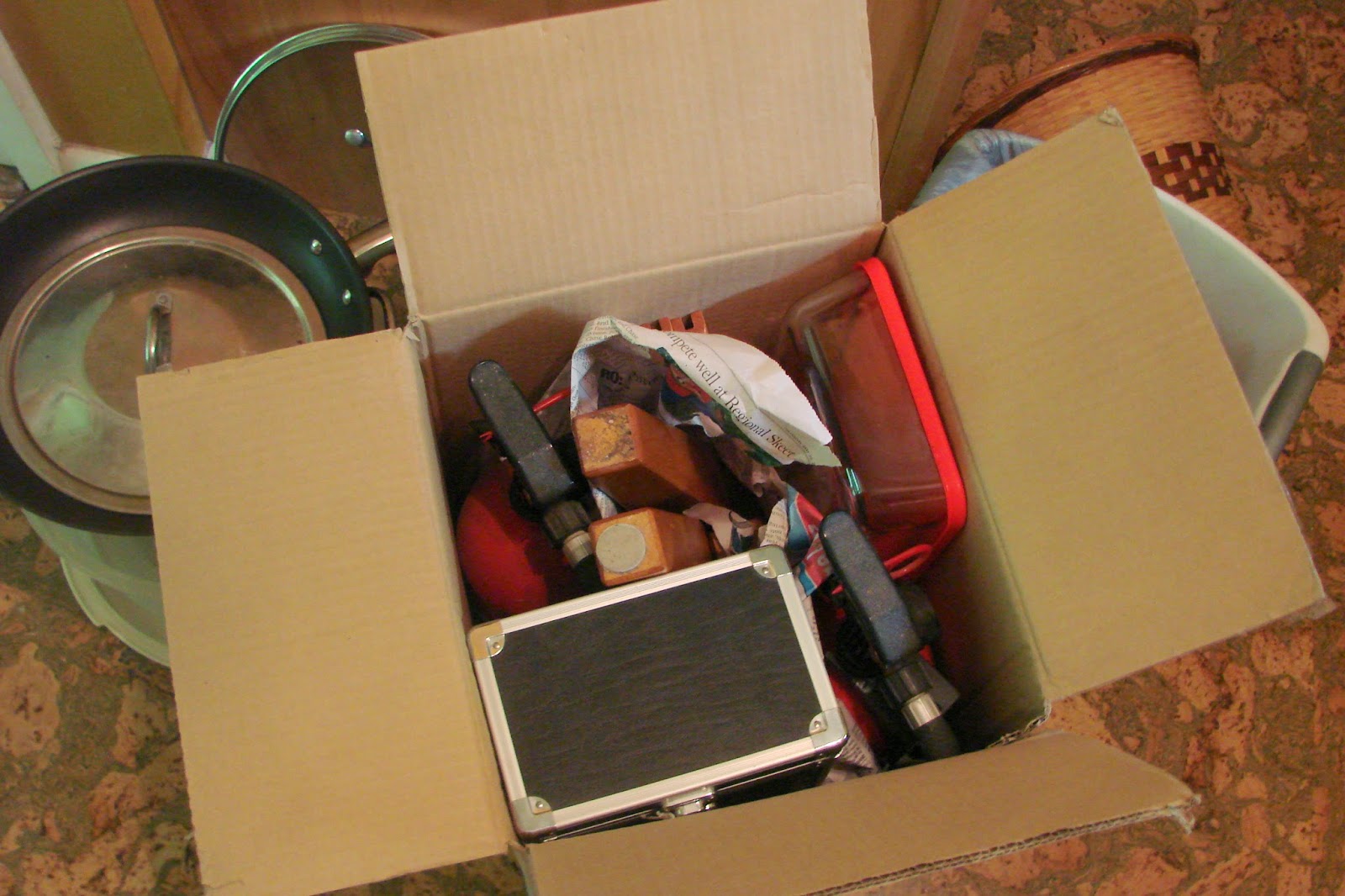 Mostly, I'm trying to be organized and box like items together. But I'm not above jamming in anything that will fit when there's a little extra space. Fire extinguishers and the legs to my bed? Why not? And still room to pack in a couple of things my older son accidentally left here. 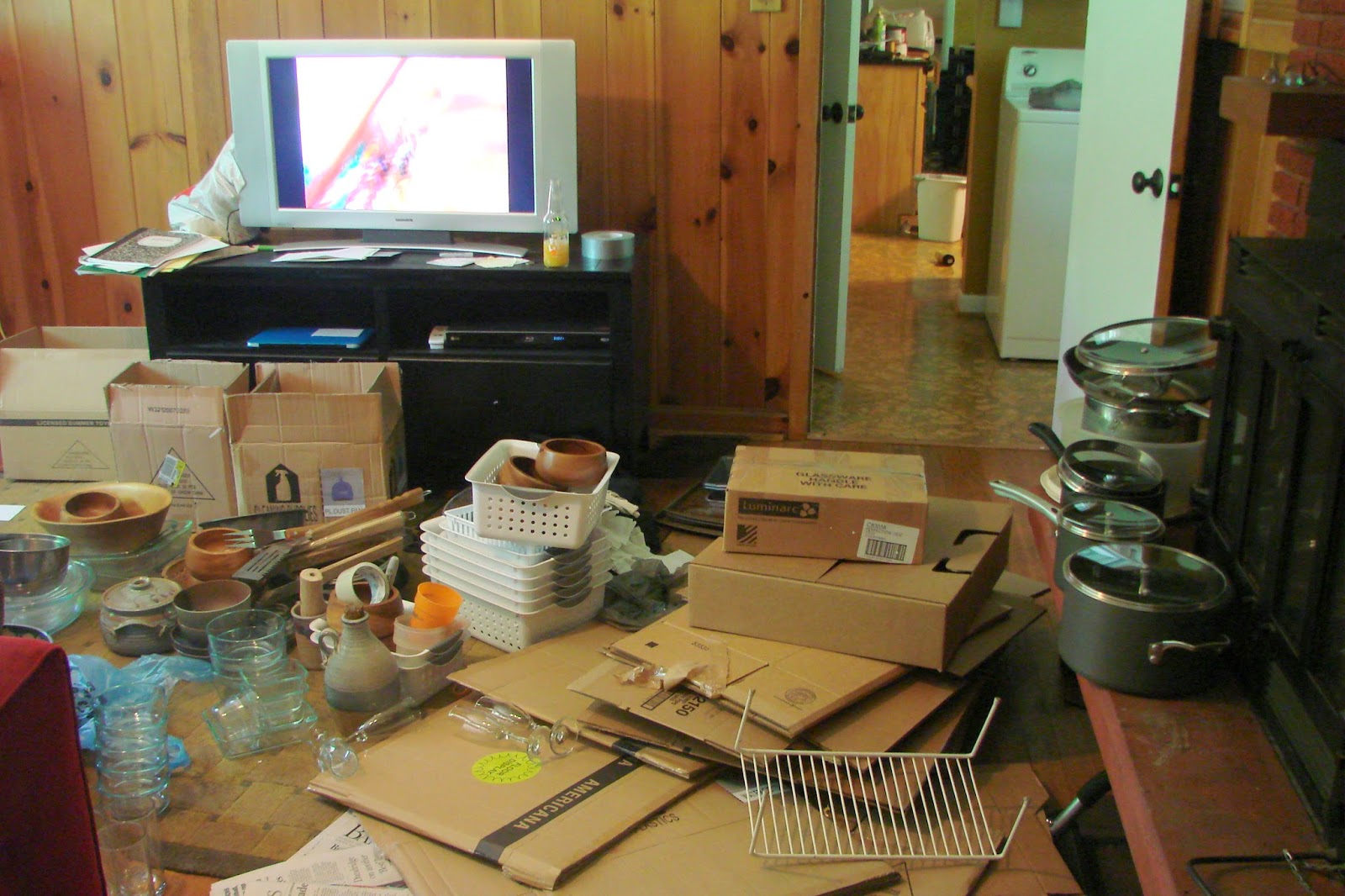 A lot of the packing happened in the den, so that I could watch TV while I worked. I chose de-cluttering shows, of course, and I think it actually made me more inclined to stick things in the charity pile than I would have been otherwise. Watching a reunion episode of Clean House where the host returned to visit former clutterers to check on their commitment to keeping their houses clean, I was instantly struck by the lack of physical contact and slightly strained smiles of one couple. I actually said out loud, "Uh oh, those two are getting divorced." Sure enough, a minute later the host reported that the two split up a few days after the filming. Even packing, I'm a shrink. And I decided while watching the hoarding show that you know you have a serious filth problem when even the exterminators are too disgusted to deal with your roach infestation. But I'll tell you, after a few days of carefully stepping over piles of things and frequently misplacing the roll of tape or my cup of coffee (or glass of wine, depending on the time of day),  I know that living in chaos would quickly drive me out of my mind. 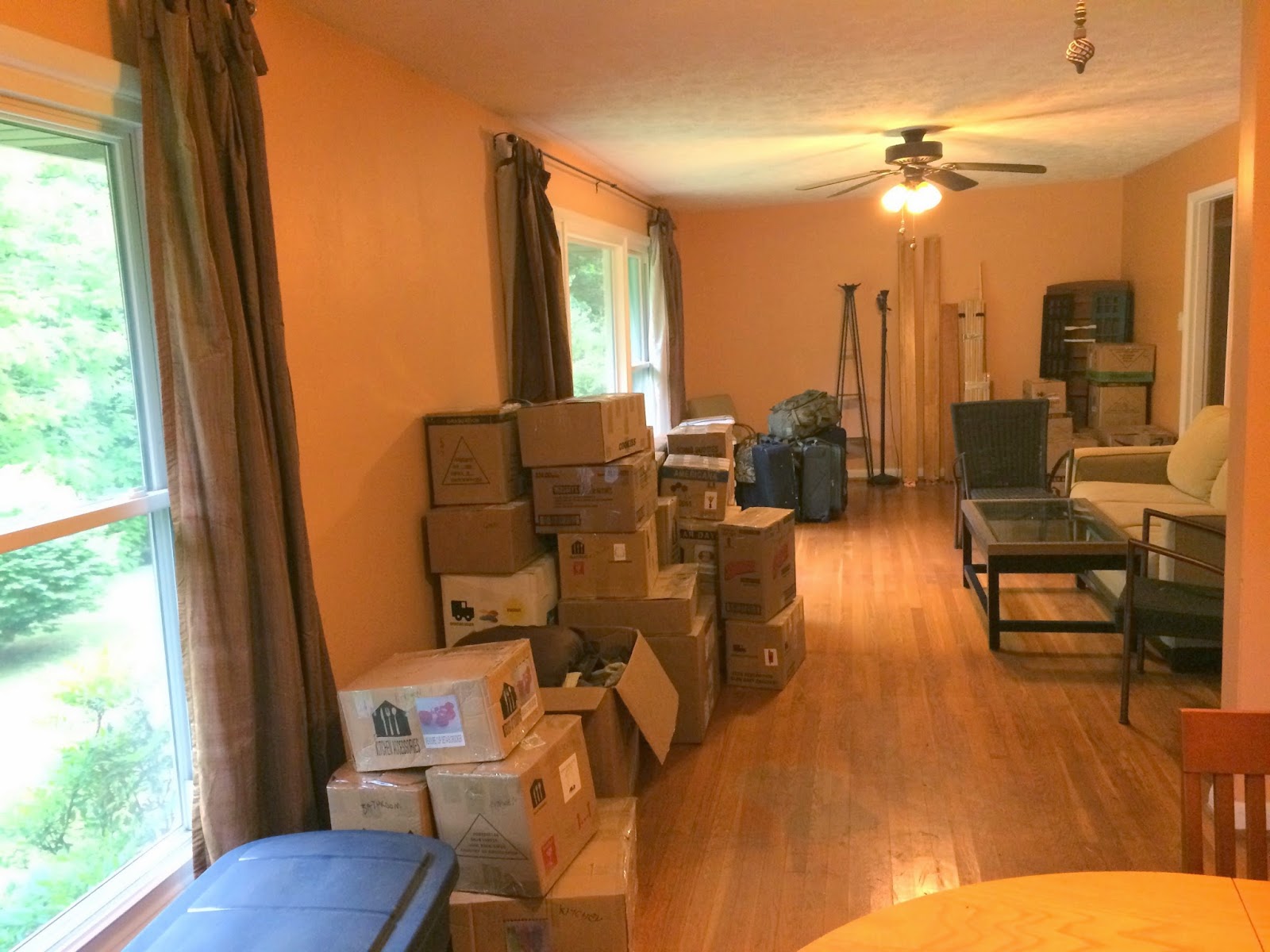 Fortunately, order eventually emerged. The boxes are packed, the beds broken down, and all that's left is picking up two more boxes to finish and then cleaning. Not bad, considering I still have a few days. And then ... I start turning another house into a home.
Posted by Secret Agent Woman at 6:55 PM