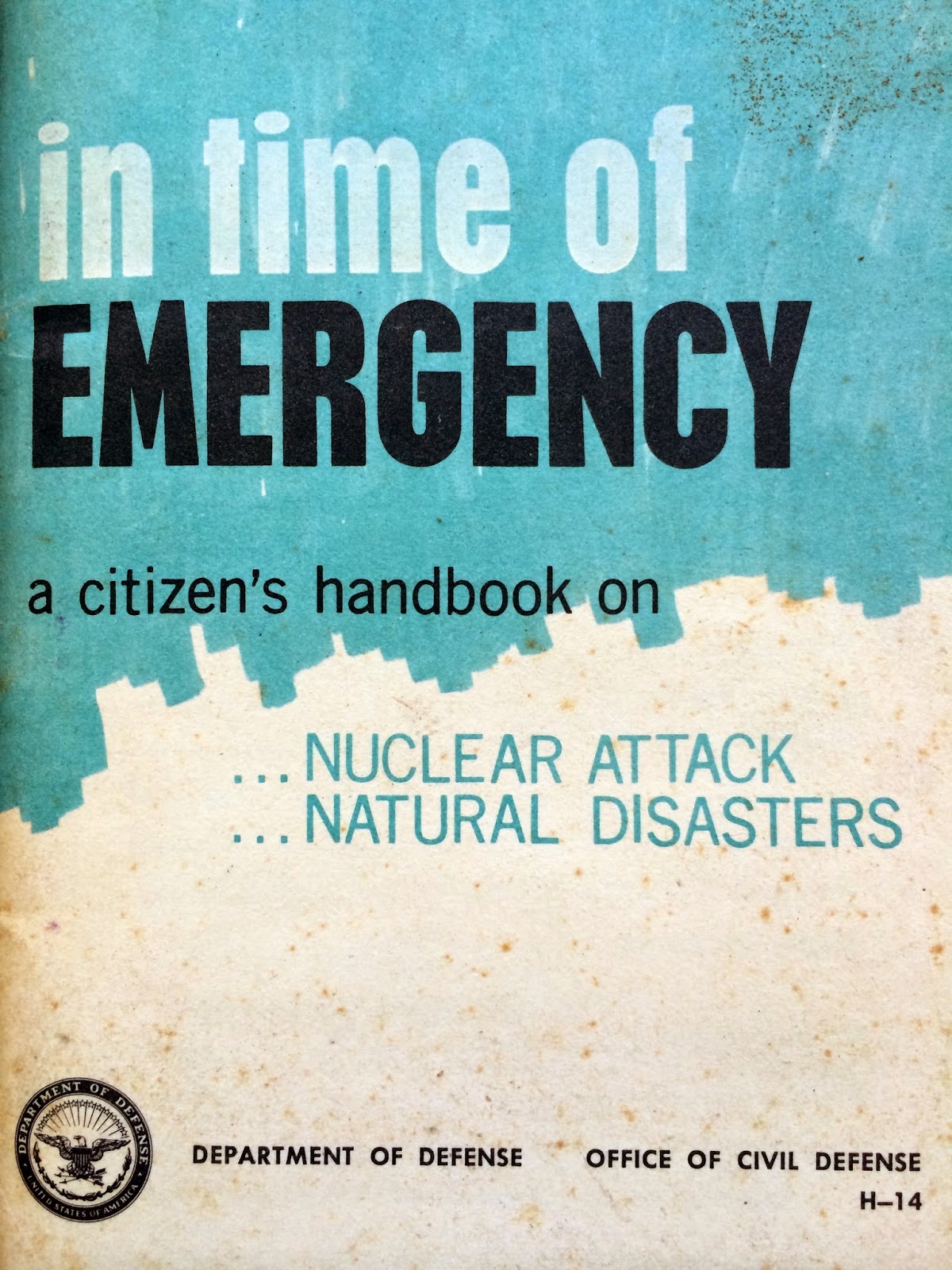 Cleaning out the basement of my 1956 home, I found this book tucked away on a high shelf of a cabinet. Somehow I missed it when I moved in 7 years ago. In spite of all the work I need to do, I got lost in this creepy little read. Take a walk back with me to the Cold War mindset of 1968... 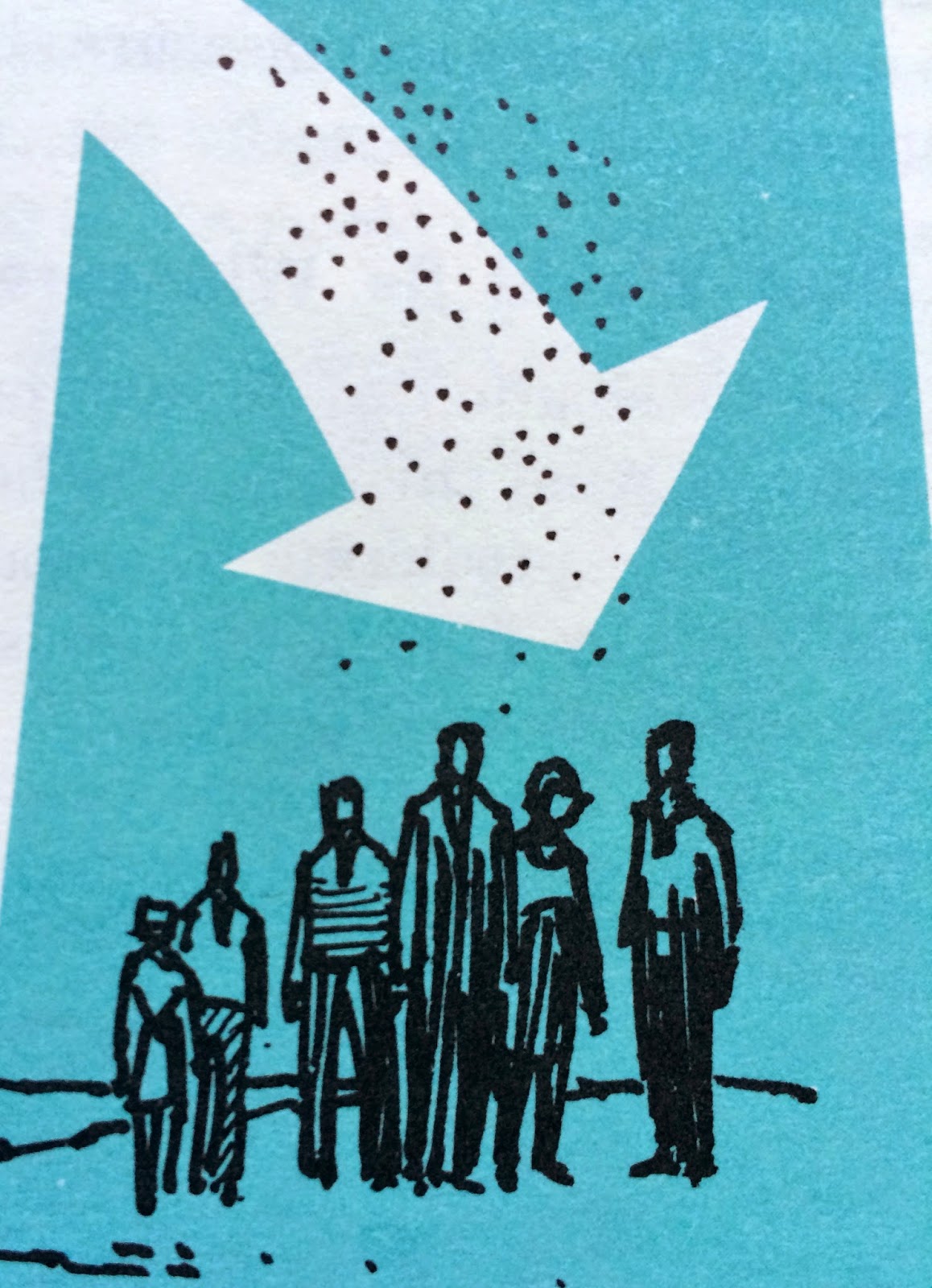 The book assures us that a "nationwide civil defense system now exists in the United States and is being enlarged and improved constantly." Good to know the war machine is in place, but citizens are encouraged to lessen the casualty count by preparing in advance. "If an enemy should threaten to attack in the United States, you would not be alone. " Whew! "The entire Nation would be mobilizing to repulse the attack, destroy the enemy, and hold down our own loss of life." Doesn't that just make you feel all warm and cuddly? I could hardly wait to move on to chapter 2: 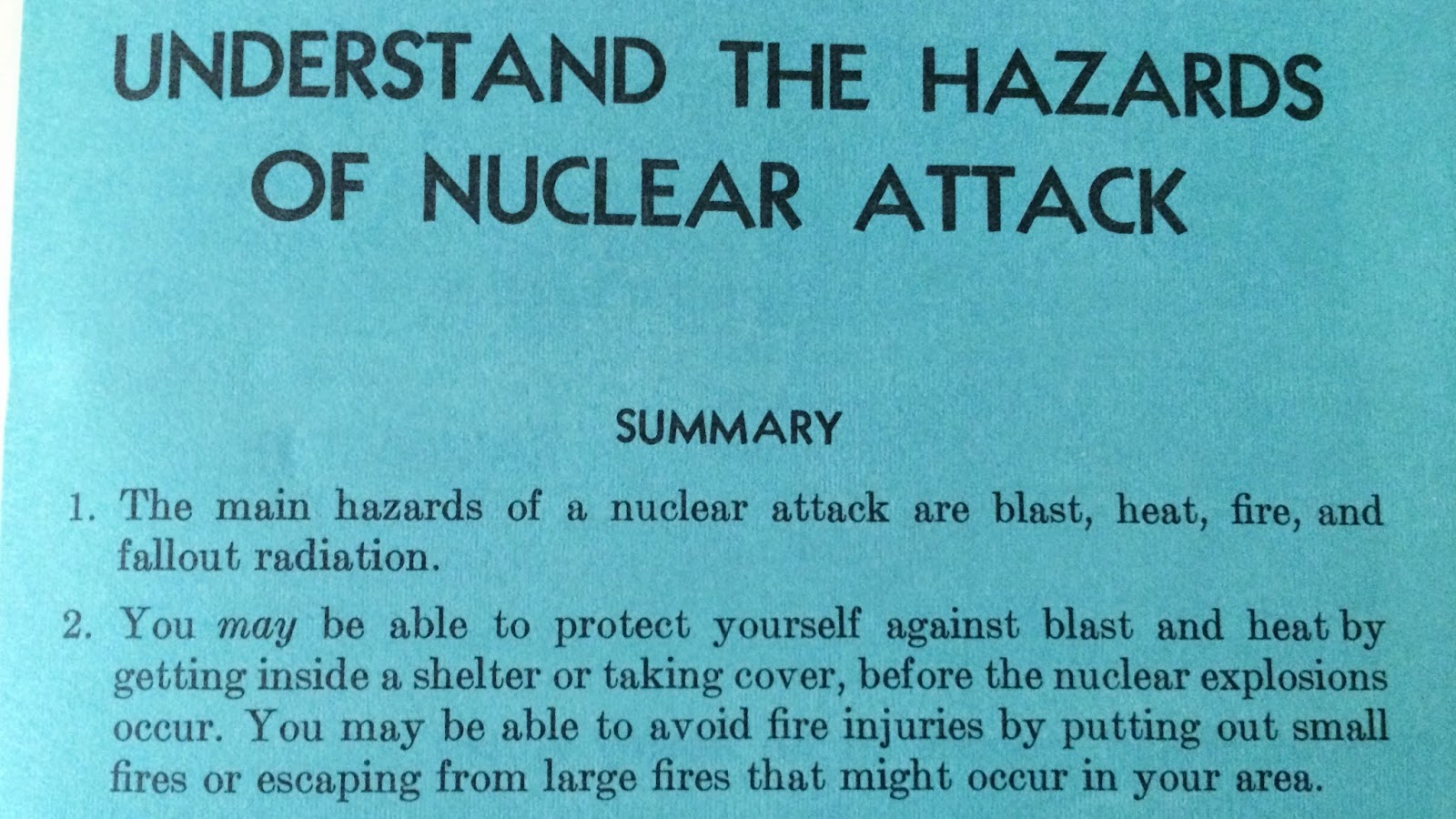 At least they acknowledge (sort of) that it may be hopeless even in a shelter.  I was particularly struck by the useful information that putting out or avoiding fires helps prevent burns. Thanks, DOD! 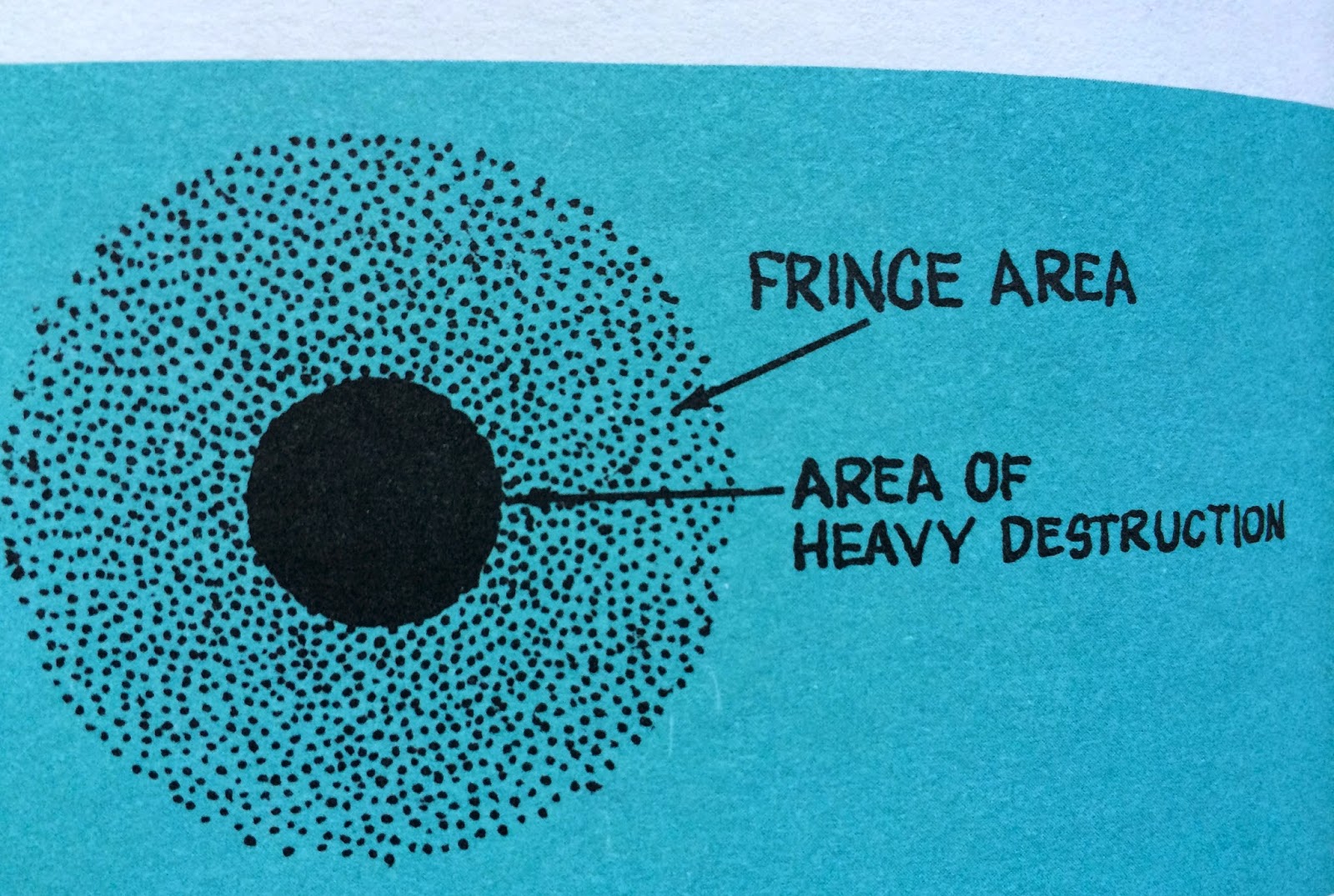 Under the heading, "What Would Happen in an Enemy Attack," we discover that those close to the explosion "probably would be killed or seriously injured by the blast, or by the heat of the nuclear fireball." Nice. But if you are a few miles away, you just might live. Long enough to die of radiation sickness, no doubt. Personally, I'd prefer to just take a direct hit and get it over with. 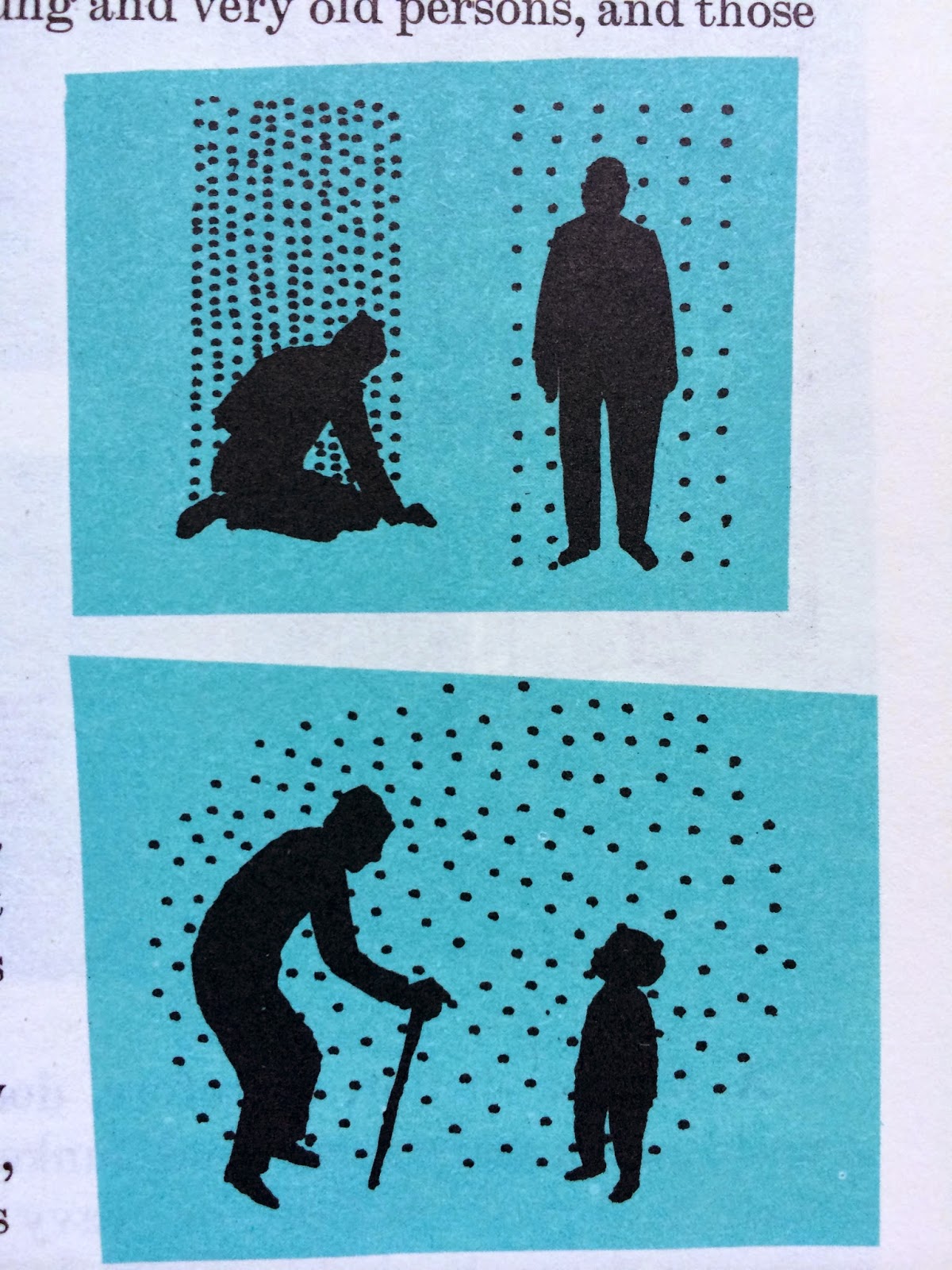 As you can see, the heaviness of the initial dose determines how quickly you sink to the ground in despair. Furthermore, old folks and young children might as well hang it up immediately. (Stop looking up, kid, that's not fairy dust falling on you!) The book is awfully blithe about ongoing dangers, assuring us that simply wiping off food will make it safe to consume and that radiation will settle harmlessly on the bottoms of open water sources. Riiiiight. 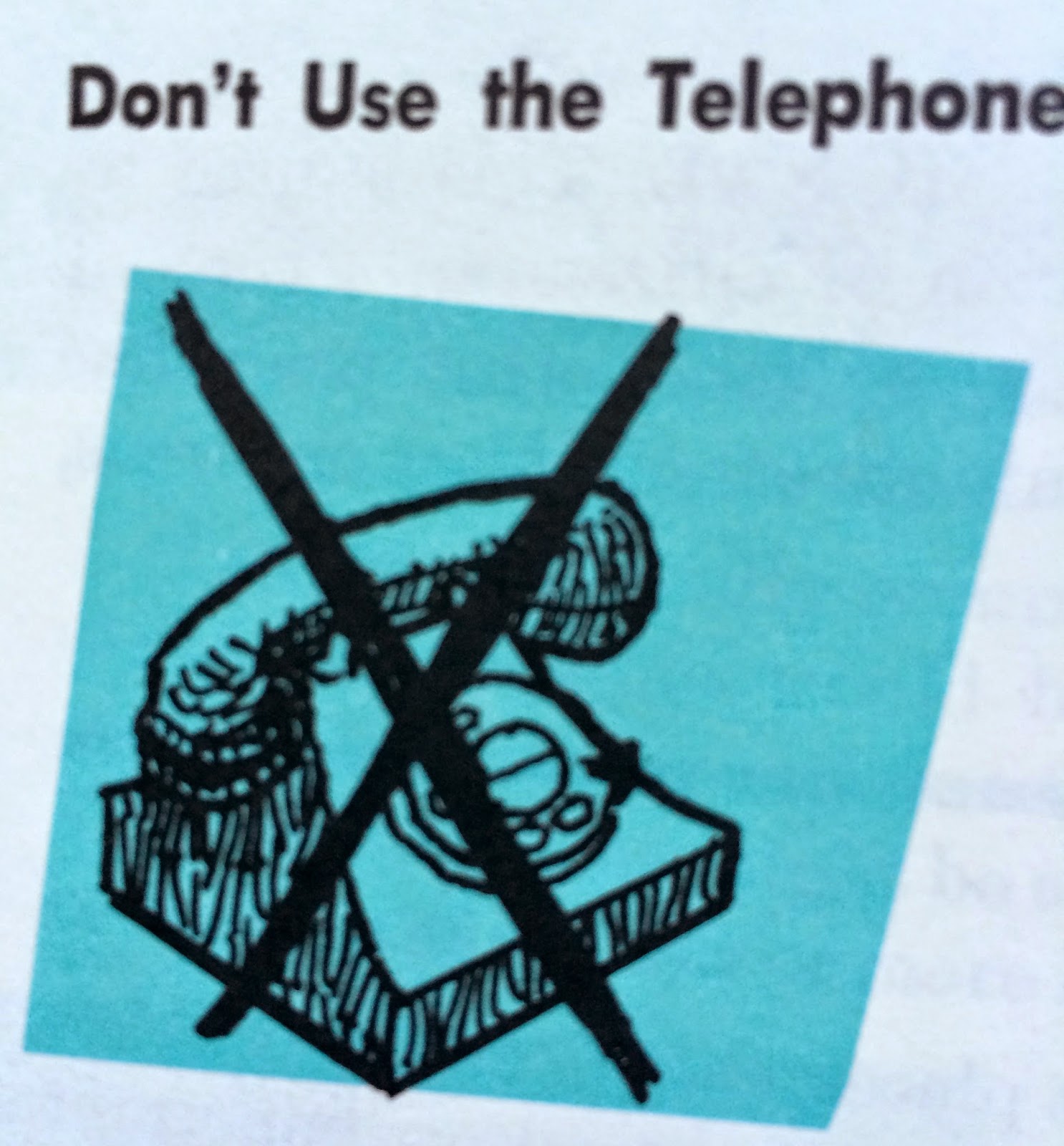 In the chapter on warnings, we learn that a 3- to 5-minute wavering siren or a series of short whistle or horn blasts will let us know "that an actual enemy attack against the United States has been detected." Phones are to be kept free for official calls. I flashed back to having seen the movie, "The Russians are Coming, the Russians are Coming" while living on a Naval Base in the '60's. Afterwards, we kids ran from door to door in our neighborhood, shouting into the mail slots in our best Russian accents, "Emergency!  Emergency!  Everybody to get from street!" 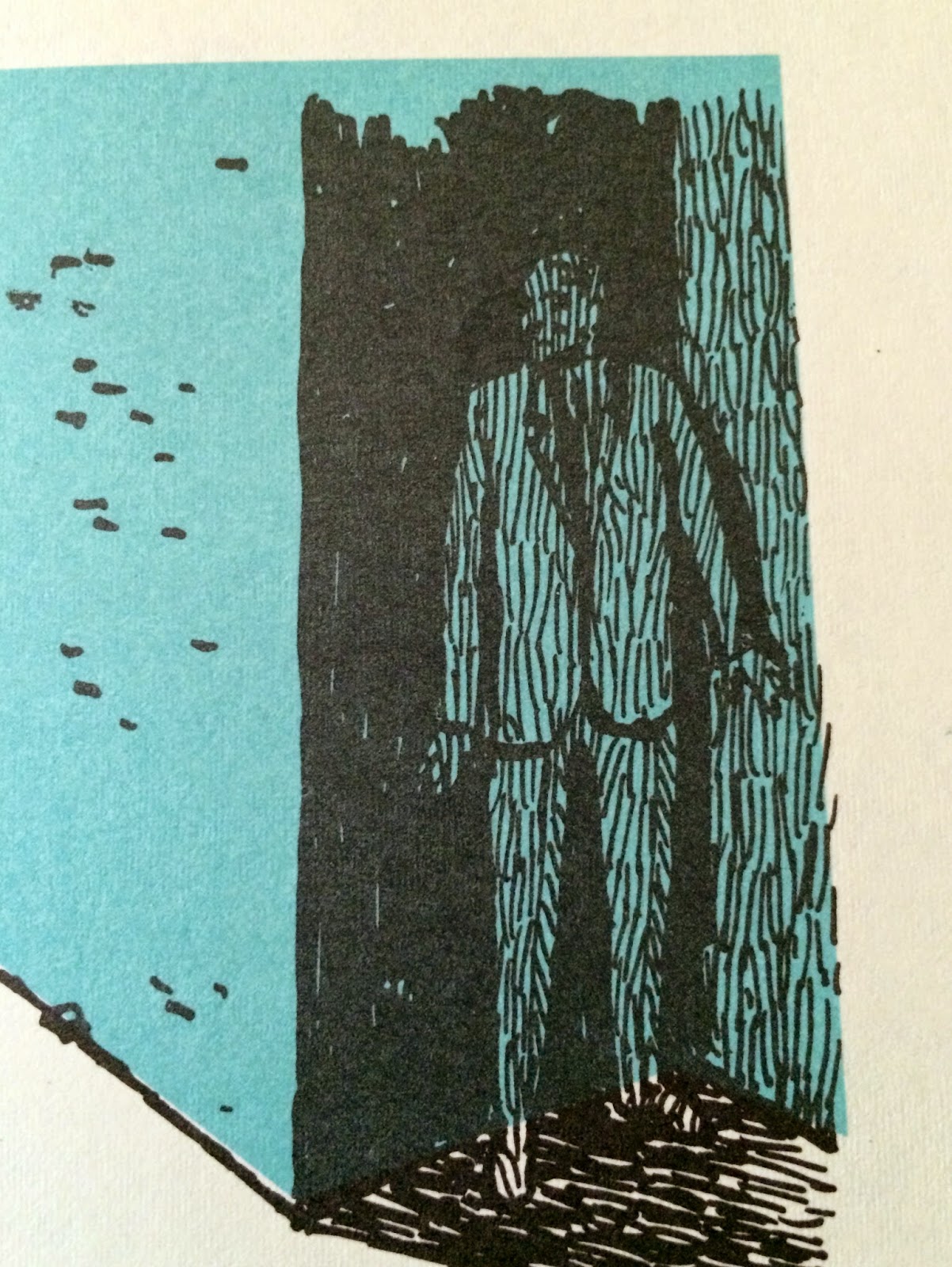 Muggers will abound during a nuclear holocaust. Okay, not really. This is to illustrate that if you are outside during a nuclear flash and you feel warmth, you should take cover instantly. As if skulking in a dark corner is going to save you. 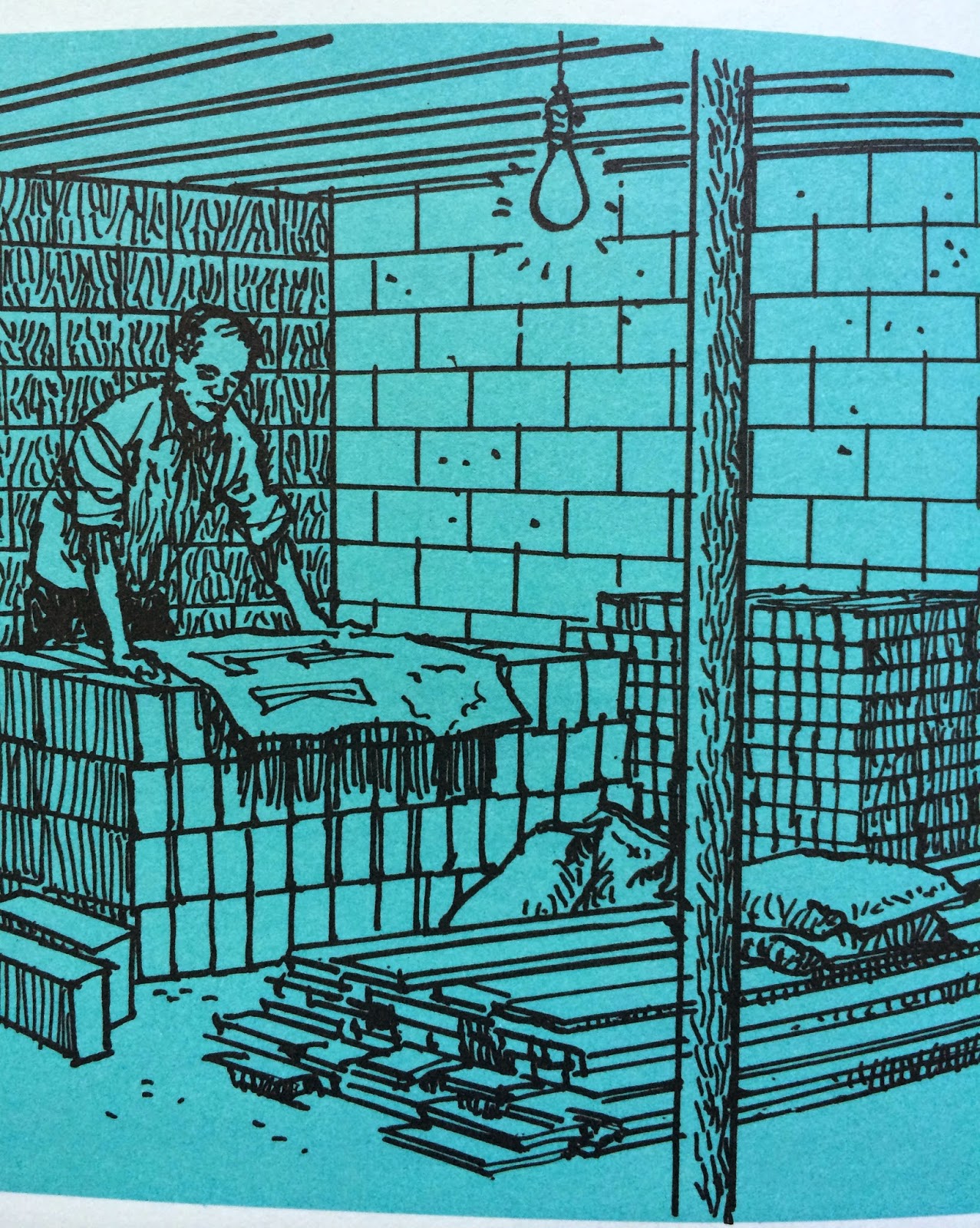 I believe this is a sketch of the original owner of my house, who constructed a cement-encased bomb shelter in the far end of the basement. According to the book, in 1968 one could be built for $150-$200 in materials (about a thousand bucks now). Judging from the many drawings in this book, only men have what it takes to plan and build a bomb shelter. 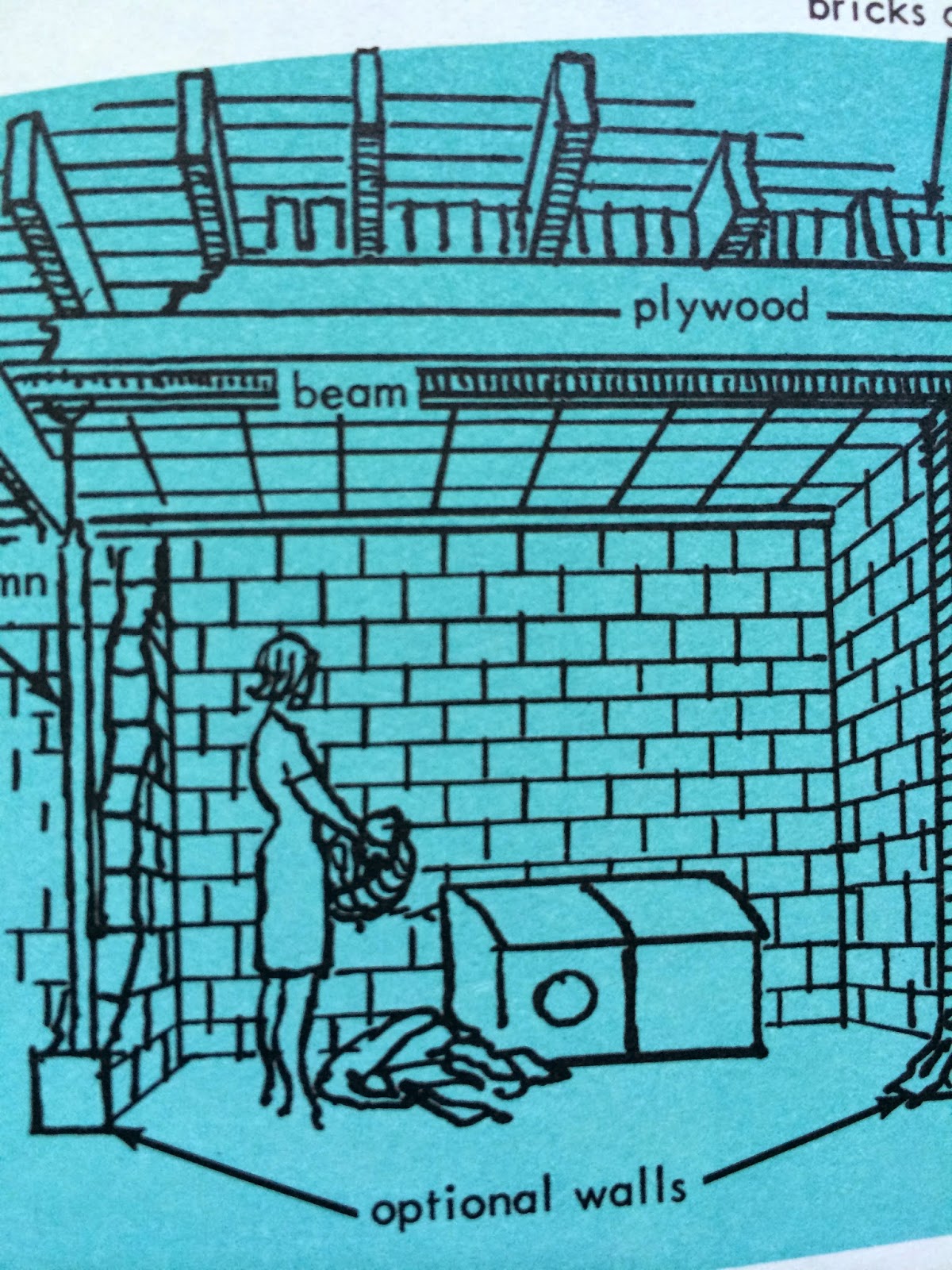 Women are too feeble to do anything but the household chores. But at least they get to do laundry in the safe shelter built by their clever, capable husbands! 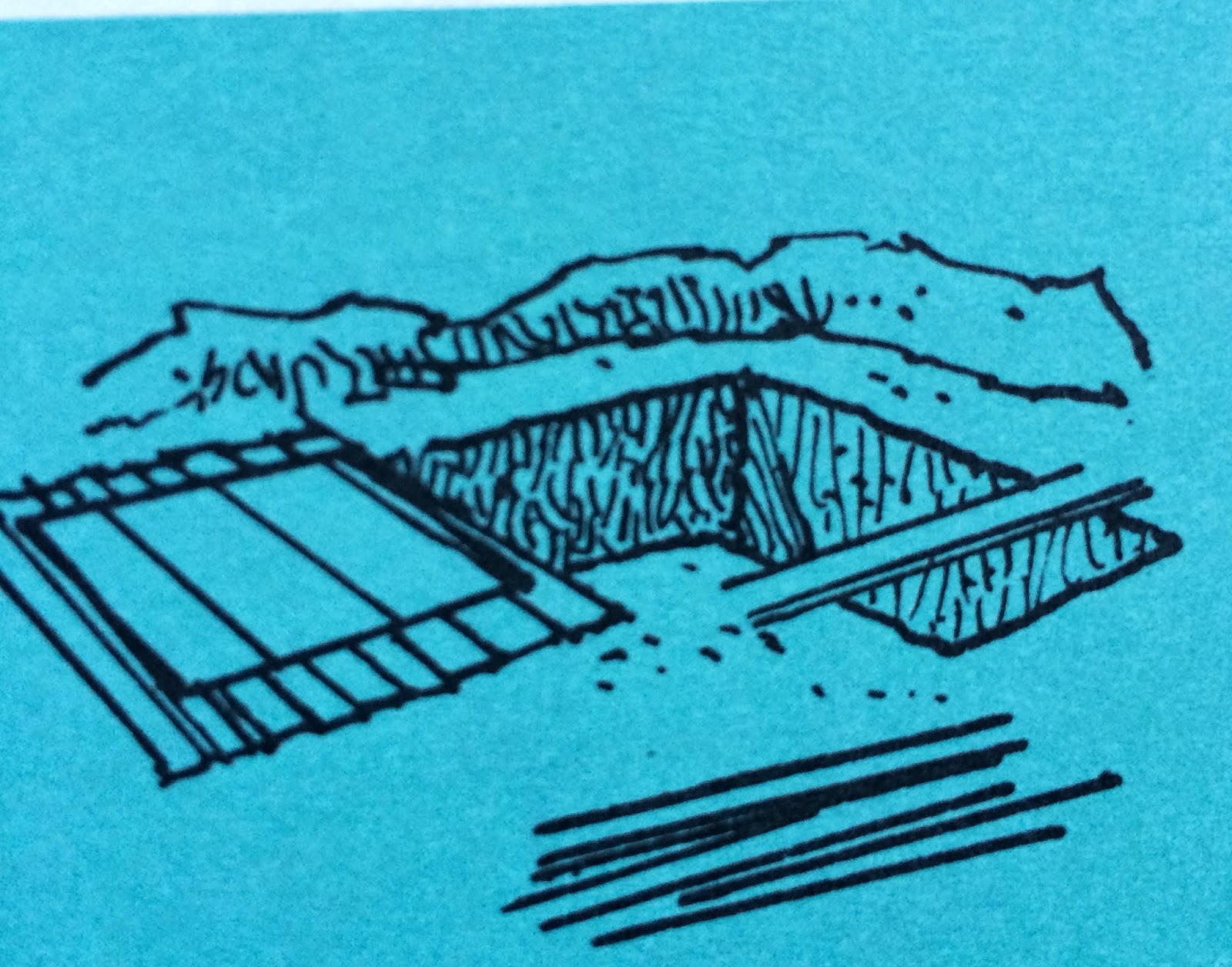 If you aren't a decent enough American to build a permanent shelter in advance, you can always improvise a shelter when an enemy attacks. All you have to do is "dig an L-shaped trench, about 4 feet deep and 3 feet wide...cover the entire trench with lumber (or with house doors that have been taken off their hinges)" and on top of that "pile earth 1 to 2 feet high." Think about it: nuclear bombs have been launched in your direction and you really think you're going to get all that done in time? I read this to my son and he said, "Yeah, I think you'd be SOL." 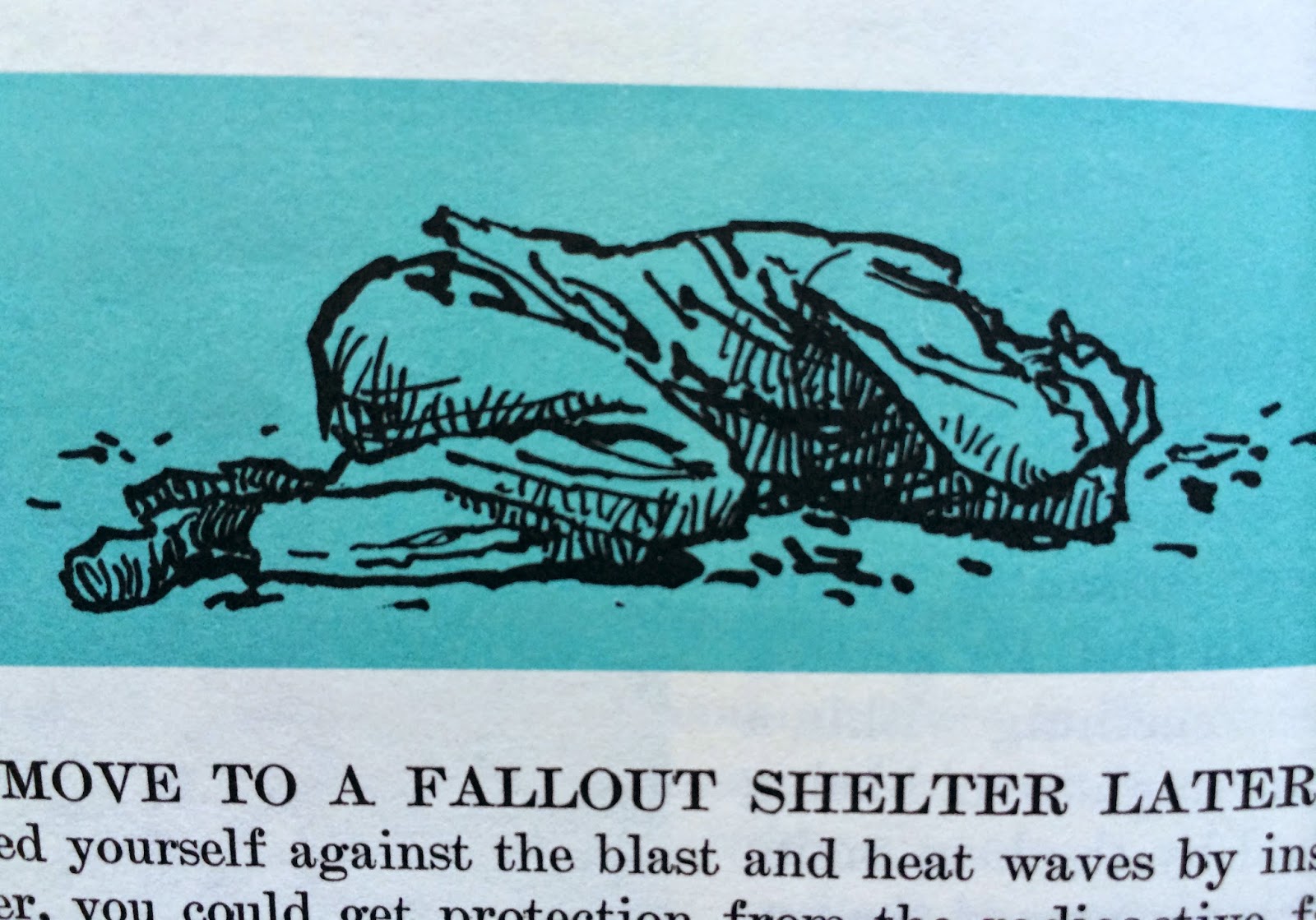 Finally, don't forget to duck and cover. Curling into a fetal position has been show time and again throughout history to be an effective defense against catastrophic events. 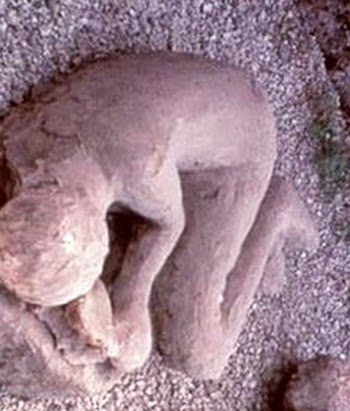 Just ask the folks of Pompeii.
Posted by Secret Agent Woman at 12:00 PM