Ireland Day 2a: Plans? Who needs them?

I realized that I am going to have to break up most of the days to even get a sense of the things we saw while we were there. (You know, the whole on-line journal thing.) 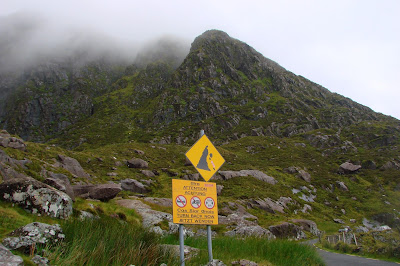 The next morning, we set out to drive over the misty Conor Pass. The sign warns that you can plunge to your death, and that trucks and buses shouldn't cross here. Cas Siar Anois! (Turn Back Now!).
This doesn't even quite capture how unnerving it was. At times, we had to pull off onto widened parts of the single lane road to let oncoming traffic pass. 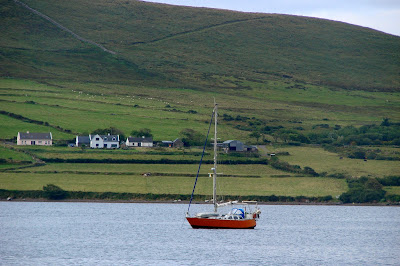 Down to Dingle Harbour, to find breakfast and start our planned drive around the western coast of the peninsula. 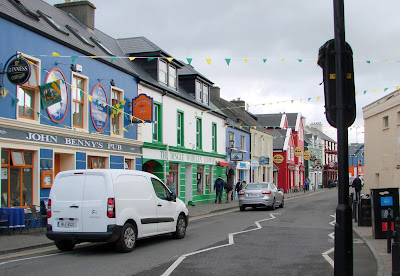 Into Daingean uí Chúis, where we looked in vain for an open breakfast place. We finally stepped into a small grocery to ask and the friendly guy took us outside to direct us to various options. He asked first if we were looking for a "fry-up" or something lighter. He said the Irish liked their heart attacks. He also let us know that breakfast places typically opened at 10 or 11. To my way of thinking, 11 is almost lunch time.  We decided to walk around while we waited, and went on down to the waterfront. 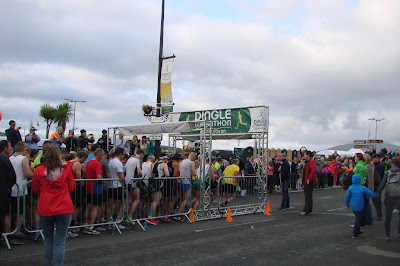 Where the Dingle Marathon was just getting ready to start. 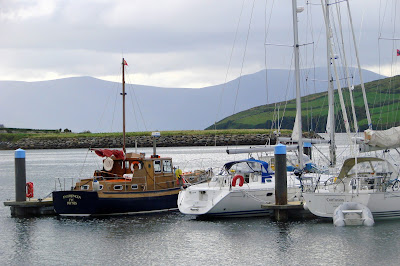 After all the runners had passed through, we wandered around on the docks to look at the sailboats. 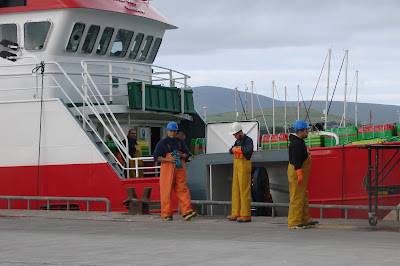 Oh, oops - one of the men on the fishing boat crew noticed I was taking a picture. 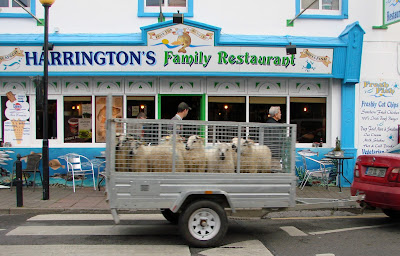 Finally, this restaurant opened and we decided to try a modified version of a fry-up - eggs, toast, chips and coffee. I'm hoping these sheep were just headed to someone's farm. 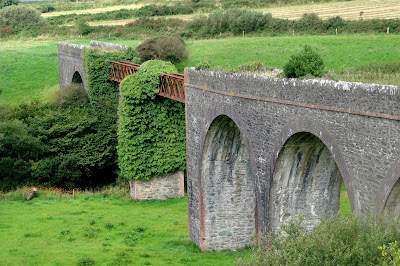 Turns out, the marathon closed down the Slea Head Drive we'd planned to take. No worries - we were not tied to our plans, and headed in the opposite direction to explore the other side of the peninsula. We passed this bridge to nowhere along the way. 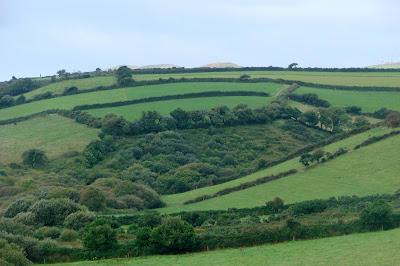 Through Anascaul and the rolling green countryside divided into small pastures we saw everywhere we went. 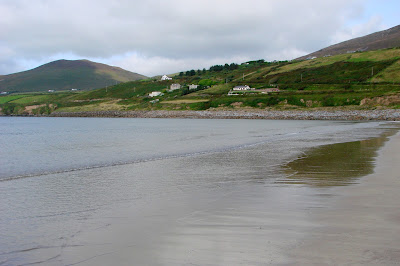 We stopped at Inch Beach to walk around. This sand spit stretches into Dingle Bay. Warmer than I was expecting, but not warm enough to go in! 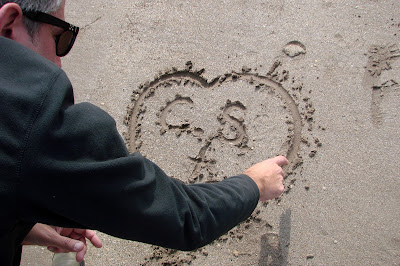 My fiancé, who is a romantic soul, drew a few hearts in the sand for me. 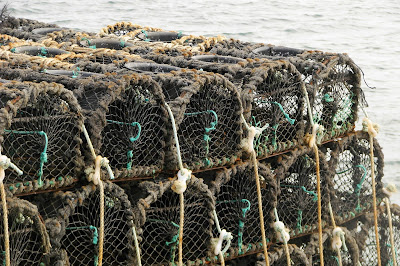 Then on up to the other side of Brandon Bay, to Fahamore at its tip. Just north were the Maharees, a set of tiny islands also referred to as the Seven Hogs. Apparently, from the many lobster pots we saw, it has a good supply of lobsters as well. We did NOT see them in restaurants, though, so they must be part of the ship-to-France phenomenon. 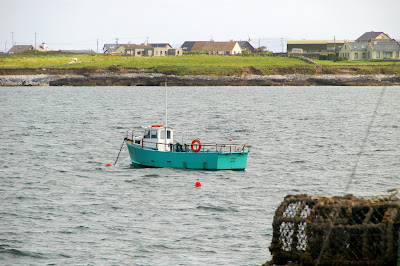 This area was quiet and sparsely populated except in the small town's center. 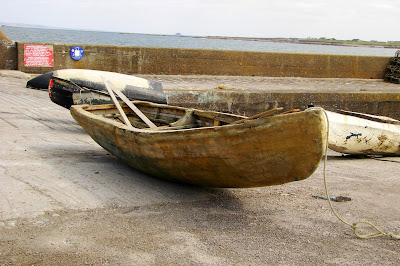 I don't know why, but this boat looked to me like something you'd see in a museum display about fishing in the middle ages. Anyone know what kind of bird this is? A kestrel, maybe? Whatever it was, it had caught itself a small fish. 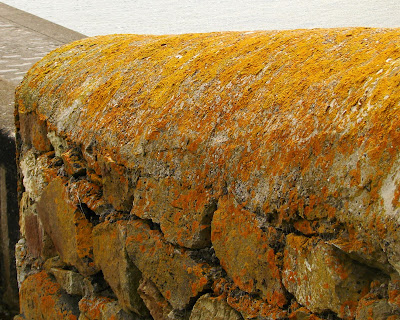 We climbed up over the rocks above the pier to walk around in the fields a bit. 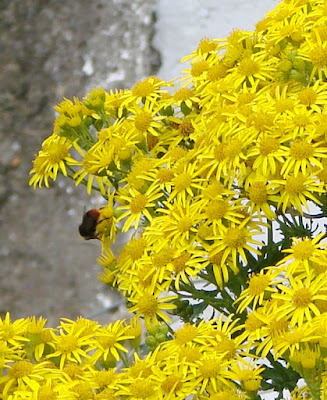 We hit Ireland at a good time - it had been a very rainy summer, we were told, and everything was in bloom. The weather magically cleared as we arrived though, and we did not see any rain until our last day. 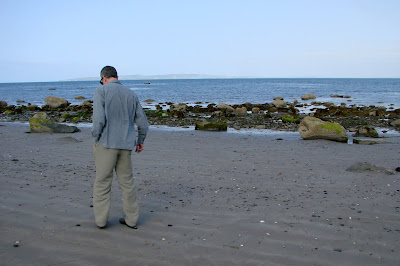 Fermoyle Beach, the longest continuous beach in Ireland, begins in Fahamore and curves along Brandon Bay. 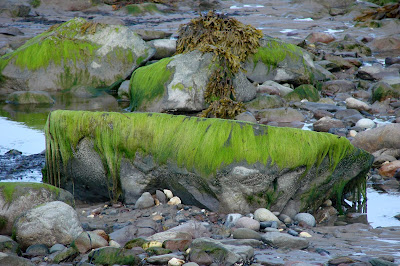 It had warmed up by mid-day and we walked for quite a while on this beach, picking up a few rocks and shells to bring home. 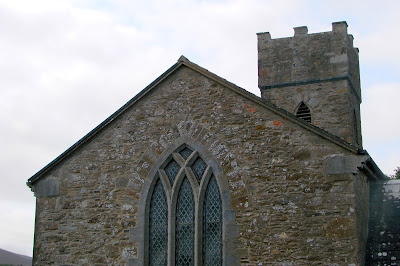 Then drove back down to the town of Castlegregory. 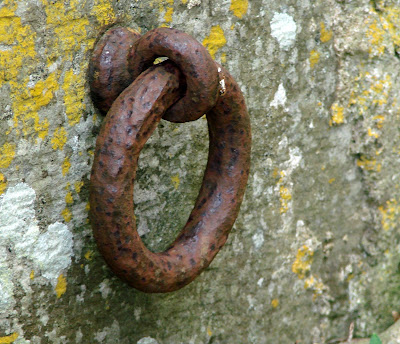 We got out at an old church that had the ruins of an even older structure and a graveyard. 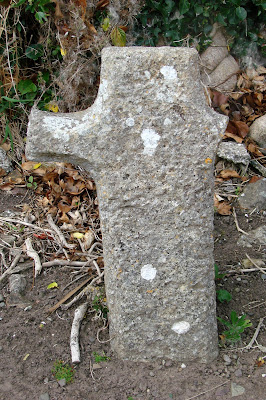 This weathered cross had seen better days and many of the gravestones commemorated entire families and carried the rather ominous plea, "Jesus have mercy on them." 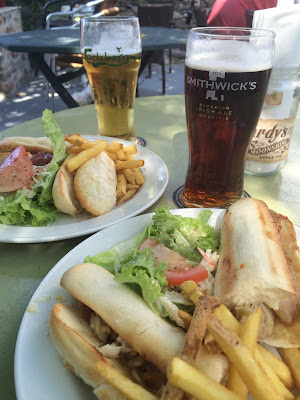 We found a café with tree-shaded outdoor seating and had delicious panini sandwiches (one with caramelized onions and local goat cheese and another with  chicken and cheese) and pints before starting the second half of the day's adventure.
Posted by Secret Agent Woman at 9:23 PM