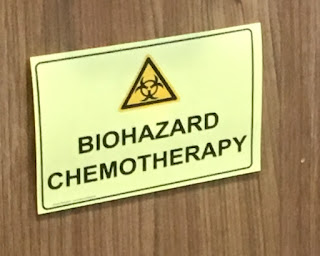 I'm one of those people who needs to know everything I can about my own healthcare. I have patients who tell me, "My doctor put me on a new medicine. It's a white pill. I'm not sure how many milligrams." That just blows my mind. How do you not know what medication you are taking? I'm home now after my third chemo round and waiting for the neulastin to infuse tonight. And bracing myself for the string of sucky days that will follow. In the meantime, I'll give you a lay-person's overview:

My own particular chemotherapy regimen is just two chemo agents once the pre-medications (antiemetics, corticosteroids, anxiolytics) are in. When I first told my younger son I'd be on Cytoxan and Taxotere he said, "Wow. Kind of scary when they include the word 'toxin' in the drug." Cytoxan is a trade name for cyclophosphamide and was named because it's a cytotoxic drug. Cells go through a cycle of growing, dividing (mitosis), resting, and then starting over again. Normally, cells know when to stop that silliness, but not cancerous cells. They are marked by out-of-control growth, rapidly cycling through the phases over and over again. That's where chemotherapy comes in. Cyclophosamides are alkylating agents that alter the cell's DNA and slow cell growth. They act on cancer cells particularly during their resting phase, leaving them unable to replicate. The more rapidly a cell divides, the more useful a chemo agent is. The downside, of course, is that they also go after other rapid-growth cells like those in bone marrow, hair follicles and the mucous membranes of the mouth and gut. Yay.

Anyway, there is an interesting history behind the development of these drugs that goes back to World War I and the use of the first chemical weapon, mustard gas, by the Germans. It was nasty stuff, able to be absorbed through the skin so that gas masks weren't adequate protection. The troops hit by sulfurous clouds of mustard gas liquid would, at high enough doses, become blind and develop ulcerating necrosis of the skin. If inhaled, hemorrhagic pulmonary edema developed. As you can imagine, death from mustard gas was a miserable affair. The soldiers who didn't die went on to experience nausea and vomiting, hair loss and suppressed immune systems. Sound familiar?

So during WWII, Nazis again used mustard gas. Because screw the Geneva Convention prohibiting chemical warfare. A couple of pharmacologists thought, "Hey, if this stuff can kill people, maybe we should use it to fight cancer!" You can't make this shit up. And it did work, to an extent. Unfortunately, it was also near-lethal and only temporarily effective. But chemotherapy was born and nitrogen mustards like the Cytoxan being infused into me every three weeks are still being used. 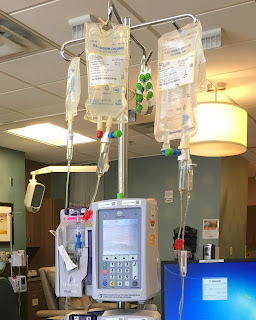 And then there is the Taxotere, one of a group of chemo agents called taxanes. The first was paclitaxel, derived from the bark of the Pacific yew tree (the genus for yews is Taxus, hence the name) in the late 60's. Apparently it's a relatively rare tree, and so twenty years of research later, another agent, docetaxel, was synthesized from the needles of the more common European yew tree. Docetaxel is more effective than paclitaxol but also more toxic. That's why on my first round it was infused very slowly to make sure I would not have a reaction to it. Taxanes work by binding to the  microtubules which control the communication within cancer cells, causing mitosis to be inhibited. 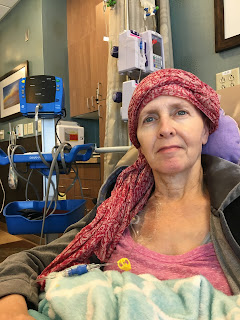 So there you have it, conifer needles and sulphur mustard. Kind of sounds natural and outdoorsy, doesn't it? Okay, no, no it doesn't - it is definitely no picnic. But with any luck the combination of a microtubule inhibiting taxane and and DNA-disrupting alkylating agent will do its job on any rogue cancer cells in me without taking me down in the process.
Posted by Secret Agent Woman at 9:45 AM