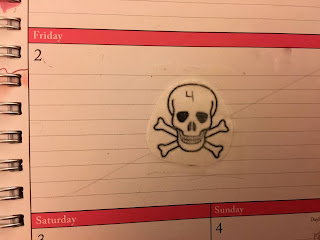 Throughout my life, I always believed that I could never, ever do chemotherapy. The idea of being poisoned frankly terrified me and I have a pretty intense needle phobia. Not the "I have to look away" kind of phobia, but the "I'm going to lose my damn mind if you stick a needle in me" kind. The kind of phobia that makes me guarantee that I will never get a tattoo or have acupuncture. The kind of phobia that made me choose natural childbirth just to avoid a needle in my back. And yet, somehow I did it. Because when it came right down to it, I didn't like my odds without it. With my particular cancer, the 40% chance of metastases if I skipped chemo seemed little better than a coin flip to me. 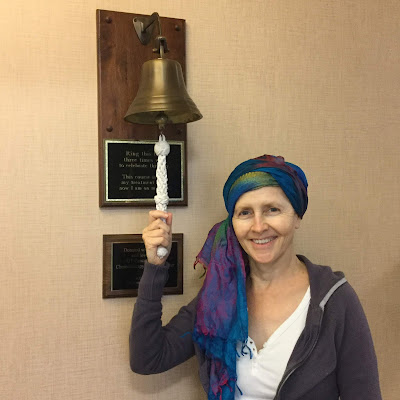 At my chemo center, like many others, you get to ring a bell when you are finished. After having my port accessed, we met with the oncologist who was all smiles. He shook my hand at the end of our visit and told me to ring that bell as hard as I could when I finished and come back to see him in three months.

And then, the drugs and memory loss kick in. What I do recall is that while my husband was off fetching food for us, they brought around lunch and I had a turkey and cheese sandwich and a bag of chips. Things get fuzzy after that. He went to the cafeteria, he told me later, and called several times but I didn't answer. So he came back to the chemo room, said he'd call again from the cafeteria to tell me what my choices were. I have a vague memory of asking for a muffin. He called several times again and when I finally answered, I apparently wouldn't say anything. He chose for us, and came back with a muffin, a grilled cheese sandwich and fries. He tells me I offered him a bite of the muffin and then when he turned back, I'd devoured the remainder of it and was taking huge bites of the sandwich. And I ate most of the fries. Zero memory of any of that. I told him I remembered the first sandwich and chips and he said, "No kidding, I had to brush a bunch of potato chip crumbs off you." Yeah, don't remember that either. Maybe it was my body's way of calorie-loading before my taste buds went to hell. 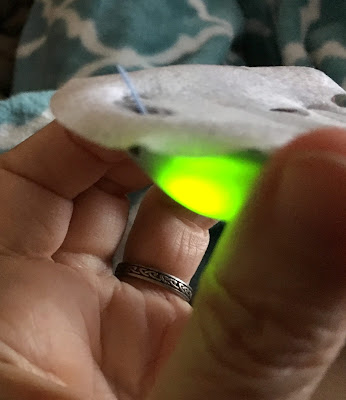 Because my taste buds definitely turn on me. Starting about Sunday evening, everything tastes foul. And smells bad, too. My husband decided to make something involving onions and black beans, I think, and I was gagging just at the smell of it. And that was even with him cooking it in a crock pot in the garage. Weirdly, sweets taste especially bad to me. Fruit is okay, but things like candy and cookies are repulsive. Which is really saying something given my wicked sweet tooth.

But before that, I felt okay. The neulasta on-body injector hurt more this time and I'm not sure why. See that little cannula? That is the thing that was sticking into me for 27 hours before it started infusing. I can't tell you what a relief it was to peel it off on Saturday. 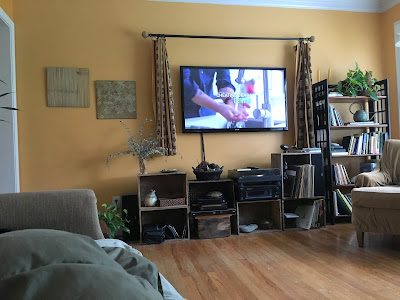 Since then, I've been mostly taking it easy and trying to medicate ahead of symptoms like nausea and bone pain. On my worst day, yesterday, I just let myself lie on the couch all day and watch Netflix. But today, I feel like I'm starting to climb back out of the pit.
The little plaque says:
"Ring this bell, three times well, and celebrate this day.
This course is run, my treatment done, now I am on my way."

Well, it's not actually done. I have surgeries ahead and years of endocrine therapy, and I know there are no guarantees. But I am very thankful to be done with the chemo part. And that plaque is not the boss of me - I rang it four times, once for each round I completed. And yes, I DID clap for myself.
Posted by Secret Agent Woman at 9:57 AM