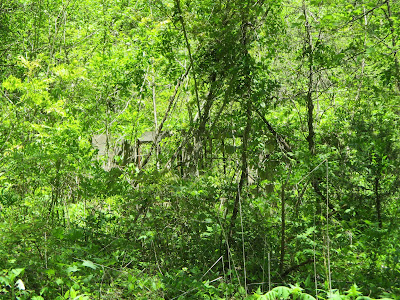 At times when I can't provide any useful help on the tiny house build, I've been working on a project of my own. Just the other side of the remaining cinder block wall was a jungle between it and the road. And one of the few spots that gets a fair amount of sun. I had big plans. 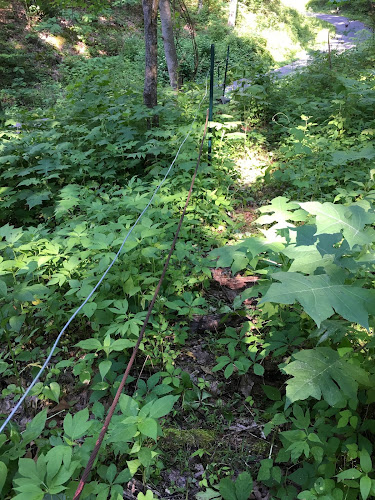 The first thing I did was clear a little path along the wire that ran from the gate to prevent people from driving up onto the land. We put in metal fence posts and added another wire so that I can eventually put vines growing along it. 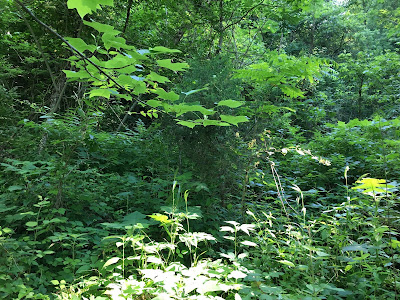 Standing at the wall, you couldn't even see the road. I took out that little cedar, a couple of mimosas and all those weeds and vines. 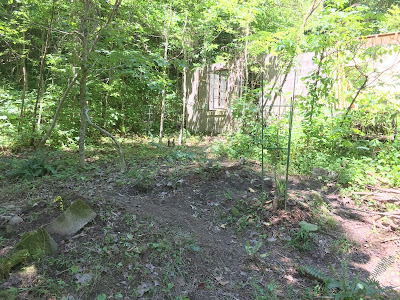 I'm leaving some things in place, but now I have spaces for pawpaw trees in front of that wall, and some paths through the front. I spent a long time picking up broken glass from the old windows, which littered the ground. A couple of the panes still had large pieces of glass in them so I broke them out and hauled all the glass away. 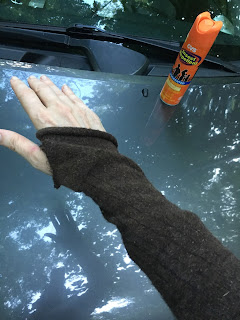 That isn't the only hazard. There's the damned poison ivy everywhere, and I've had poison ivy rash on my wrists more times than I can count. I came up with a solution, though - I cut off the end of a sock and a hole for my thumb and wear them over my shirt sleeves and under my gloves. Sexy they are not, but they work. I call them my sock gaiters. 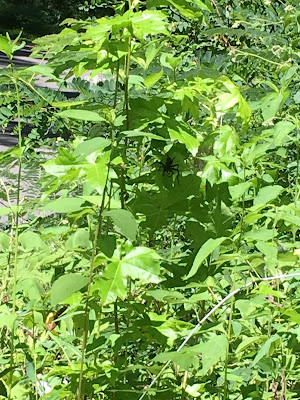 And then there is this guy. I was watching a humming bird and noticed a spider the size of New Jersey perched in a plant near me. I shudder to think of how many plants I have reached into never thinking I might encounter an enormous spider. 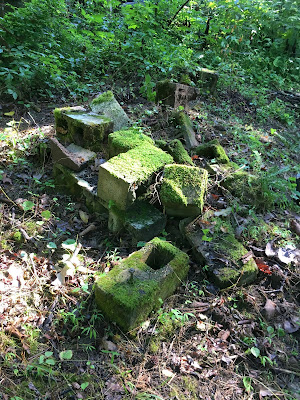 Not that any of that stops me. After I got the plants cleared out, I dismantled this big pile of cinder blocks, some of which I had to dig out of the ground. I left some in a circle for planting blueberry bushes, and rolled and carried the rest to the fence line. 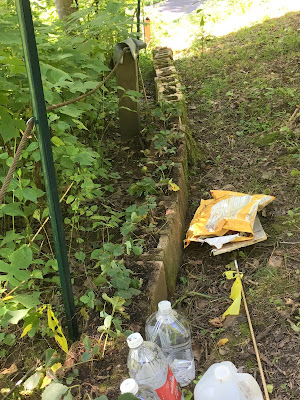 I'm filling them with soil and strawberry plants. I got the first 21 openings filled with strawberries I transplanted from my house and will put wild strawberries in the other 18. 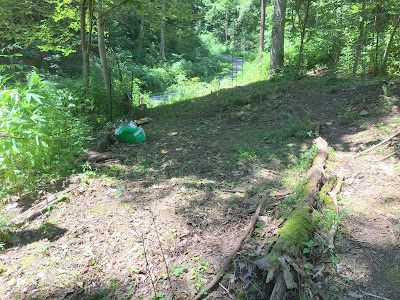 I cleared out the last of this upper portion today, and have staked out spots for fruit trees and berry bushes. Toward the end are a lot of wild blackberry canes, which I've left in place. I have already planted a couple of persimmon trees and an American plum, both natives. My goal is to also put in a couple of apple trees, a couple of crabapples (to help pollinate the apple trees),  a couple of pawpaws, and a bunch of blackberry, blueberry and boysenberry bushes. I also am going to try transplanting some figs from my house. It will take years, but eventually there should be all kinds of fruit growing here.