They call the thing rodeo. 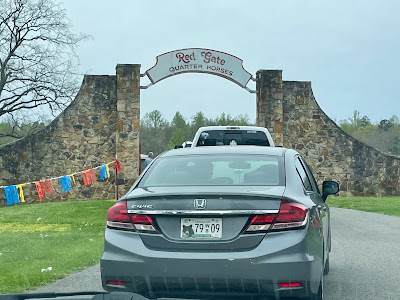 So now that we're locals, we decided we had to take in the rodeo when it came to town. This was a first for both of us. The line to get in backed up well along the highway. 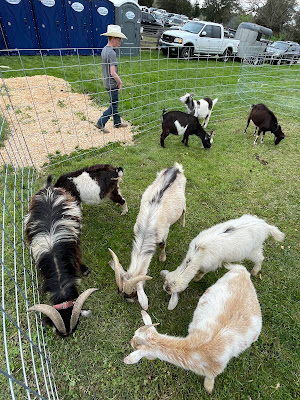 It was sort of a county fair atmosphere - a petting zoo, one of those mechanical bulls, food trucks, and live country music. I'm not sure I've ever seen so many cowboy hats in one place in my life. 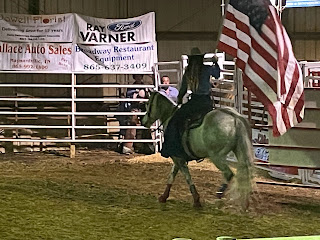 After we'd gotten our dinner, we found seats in the arena. It was packed and we had to climb up into the bleachers. The South is a deeply flawed place, to be sure, and there were political jokes and long, long prayers we just had to tolerate. But, when I started making my way up into the bleachers, instantly half a dozen hands reached out to help me along. The same thing happened when we had to climb back down. To a person, everyone was friendly and helpful. 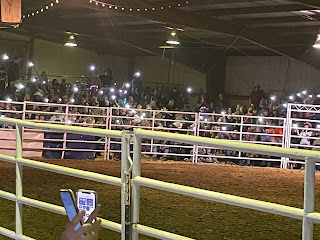 While they got the bulls loaded into their chutes, the announcer and the rodeo clown kept up a show to entertain folks. This included an audience sing-along, with one song including the instructions to hold up our phones in flashlight mode like lighters. We sang along (and my husband laughed when I didn't miss a beat when the song was "Friends in Low Places") and cheered when the rodeo started. 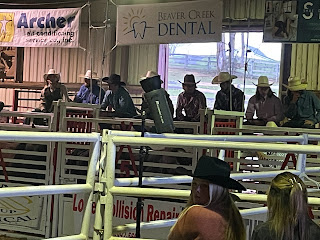 The riders waited their turn. The announcer commented that the most dangerous part was probably when the rider was on the bull in the chute, because they were trapped in an enclosed space with an angry bull.
First up were the bucking bulls. Those were some big, scary animals. One even crashed through the gate and rampaged around the arena before they got him corralled back into a chute. The cowboy hopes to be able to stay on the bull for 8 seconds, holding on with only one hand. Some were tossed off almost immediately, and then rolled (or limped) to safety while the two pick up men on horseback and the rodeo clown diverted the bull. Only a few of the riders wore helmets.
Next, the broncs. The bareback riders were required to come out of the chute laying back with their legs at the horse's ears. There were also riders who used a pommel-less western saddle.
Last before intermission was the mutton-busting event. This is when small children are placed on the back of a sheep and hold on as long as they can. In this clip, it's a four-year-old girl. I'm not going to lie, this was adorable. And while it might seem abusive, there was one young fellow who started crying as soon as he was put on the back of a sheep and his dad whisked him off and hugged him and the crowd cheered for him, too, so there was clearly no pressure for the kids to do anything they weren't comfortable with. We got a funnel cake before we left, and I popped back in to watch a little of the barrel racing. I didn't expect to enjoy it as much as I did, but we will definitely go back next year. 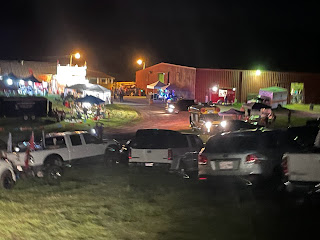 Well, it's bulls and blood, it's dust and mud,
It's the roar of a Sunday crowd.
It's the white in his knuckles, the gold in the buckle
He'll win the next go 'round.
It's boots and chaps, it's cowboy hats,
It's spurs and latigo.
It's the ropes and the reins, and the joy and the pain,
And they call the thing rodeo.
It's the broncs and the blood, it's the steers and the mud,
And they call the thing rodeo.
-Garth Brooks
Posted by Secret Agent Woman at 6:48 AM