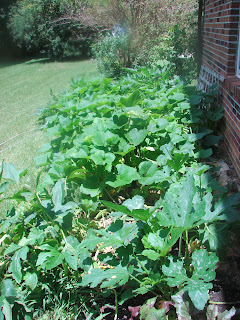 I know, strange to do an "update" on a reincarnated blog. Nevertheless: The squash plants are now spilling onto the lawn and producing far more squash than I need. I've even left some in a bag on my neighbor's front door handle. And because the plants are so full, squash hide and grow to monstrous proportions if I'm not careful. 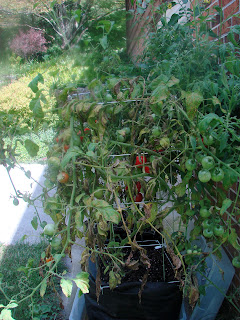 The tomatoes started coming in as well, but got thrown by the long dry spell followed by several heavy rains. One on the other side of the house appears to have given up the ghost. 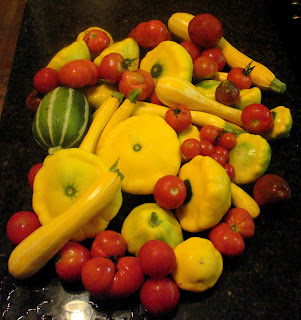 This is the harvest from this weekend alone. Several varieties of tomatoes (Glacier, Japanese Trifele Black, Sweet 100s, Old German), patty pan squash, sunburst yellow squash, and a piccolino zucchini. Actually, there was another one of those zucchini the size of a football and I pitched it into the woods. 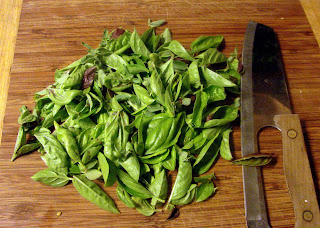 I decided I would try to use it all up.  Some of the squash went onto the grill tonight.  Everything else went into the oven to be slow-roasted. The tomatoes I halved, de-seeded, and tossed in olive oil, fresh basil and oregano, salt and pepper, and crushed garlic. Squash were sliced and coated in the same mixture, but without out the garlic and with balsamic vinegar added. And then because the oven was on anyway, I sliced some sweet onions and tossed them in olive oil, and added the remainder of the bulb of garlic, still in its papery skin. 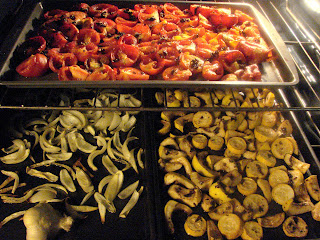 200 degrees, for several hours. I read that the tomatoes can be kept in the refrigerator for a week and in the freezer for a few weeks. I'm guessing the onions are the same and maybe a slightly shorter fridge-life for the squash. The house smelled like heaven while everything was roasting. 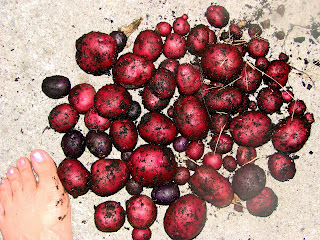 I also harvested the potatoes. The yield was frankly disappointing. My guess is that I need to start them much sooner so they can get more growth in before the heat hits - which was unusually early this year. I got only a few Adirondack blue potatoes. and more of the Mountain Rose. Both had skins and flesh the same color. And before everyone starts in with the Pota-Toe jokes - I often work bare-footed and when I took the photo, I decided not to crop out my foot to provide a little scale for these very small potatoes. 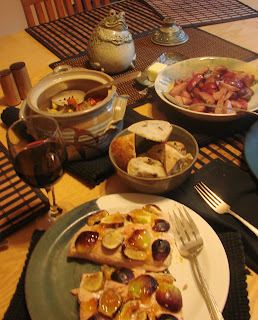 I grilled about half of them for dinner the other night, along with some squash and tomatoes and Swiss chard I'd picked earlier. And because I found fresh figs for sale, I grilled salmon with them and a glaze made of marmalade, grated ginger, pepper, and a little wine. I guess it's becoming clear that this blog is unlikely to change a whole lot outside a little personal caginess?
Posted by Secret Agent Woman at 8:42 PM