I've been meaning to write about some of the things happening while I was shutting down the old blog. Like the Fourth of July. Although the temperatures were topping 100 degrees all that week, the humidity was low and it was just beautiful on the lake.  I packed up a picnic and a chilled bottle of vinho verde and headed out. 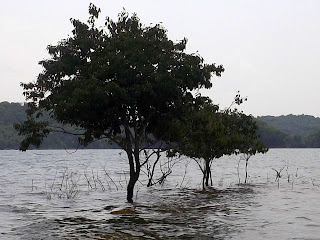 And again, a few days later. This time it was later in the day, and we forgot to pack anything at all - no food, no drinks, no towels. There is something idyllic about stopping the boat in the middle of the lake, stripping down and jumping in. The water is only slightly cool, so you can float for a long time without getting cold. And afterwards, the  warm air feels heavenly on your skin. But sometimes, I worry that one of the many passing boats is a police boat and I'm just hoping I won't end up in the local newspaper with an indecent exposure charge.
Posted by Secret Agent Woman at 10:30 PM