A little randomness from an off-line weekend. 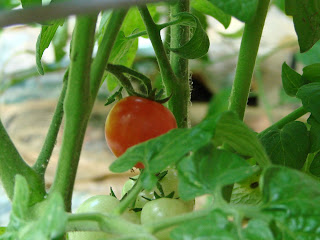 On Friday I found the first ripe tomato. Just a cherry tomato, but it's a start. The first several will never make it into the house - I eat them right off the vine.

Later that night, I ate a ton of good sushi. I sure do love sushi.The person who invited me emailed to say he'd be coming directly from work and so hoped I wouldn't be offended if he was in jeans. I wrote back: "Oh all right, then I won't wear the evening gown I was planning on. Or the tiara. Sheesh."
His response: "Nama told me they have a strict policy of one smartass per table... guess I have to call and change our reservation to two separate tables." 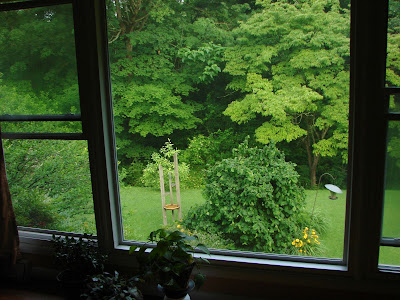 I got some questions about my reference to moving. Yes, but not for a year. As soon as my son wraps up high school, though, I want this house on the market. I know, I know, it's beautiful and peaceful out here, I have a great yard and house, and I've put tons and tons of work into making it just what I want. But this is such a conservative little place that I feel completely isolated out here. I need to live in a bigger town where I will have the opportunity to spend more time with like-minded people. Besides, I can always fix up another house and yard.  It'll be an adventure.

Saturday morning I went out to the lake and walked five miles. When I got back home, I was sitting in my living room, looking out at the park-like view behind my house, drinking my coffee, and feeling unaccountably melancholy. I decided the best way to deal with that was to think of some things to do to make me feel productive. I set about making a list of possibilities, hoping I'd at least get a few of them done. 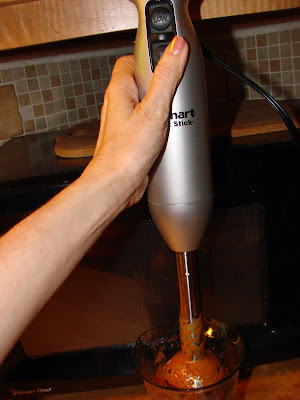 There were a few cooking tasks on the list so the first step was to get to the grocery store. As I was in the produce section, I passed a little girl being pushed in a cart. She pointed at me and said, "Look, Mommy, that lady's buying vegetables!" The mom looked embarrassed, but I thought it was really funny. Among other things I wanted to get an anaheim and a banana pepper to make a new batch of roasted pepper vinaigrette. I also wanted a chance to try out the immersion blender I'd bought to replace my big blender. I don't even know why I assumed I'd be happier with it, but fortunately it works like a charm.  Very easy to clean, too. 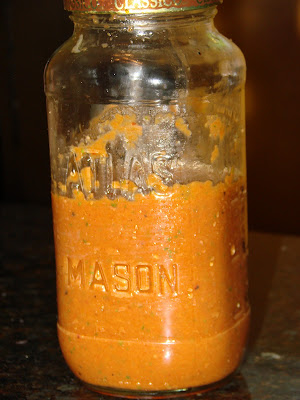 I decided to alter the recipe to make it without any sugar and also added ingredients on a whim.  This batch has the two hotter peppers, roasted (and skinned and de-seeded), plus some roasted red peppers I'd made earlier.  A clove of garlic, a handful of fresh basil and parsley, half a cup of mostly rice wine vinegar and some balsamic vinegar, a third of a cup of canola, olive and avocado oil, ground salt and pepper.  I'm telling you, it's good stuff.

I also made a small batch of a recipe called "massaged kale," just to try it out.  Basically you chop up kale leaves, drizzle them with lemon juice and olive oil and then mash it up with your hands for a few minutes.  I ended up letting it be the base of a huge salad with a little of everything in it: baby Romaine, peppers, cucumber, artichoke hearts, avocados, Greek olives, mozzarella cubes, and almonds.  I'll have it for lunches for a few days.  And made my 5 little bowls of whole grains for work breakfasts while I was at it. 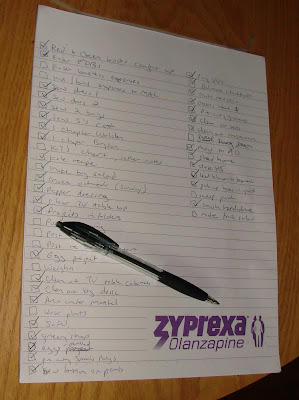 By the end of the weekend, I was nearly done with the den de-cluttering, had done some accounting work I'd brought home, took care of several mending tasks that had been piling up, read, watched movies, even did a little yard work. I'd already done a two-hour whirlwind house-cleaning Wednesday after my kids left (straightened up all the rooms, vacuumed the whole house, cleaned both bathrooms, cleaned the kitchen, changed the sheets on my younger son's bed, put three loads of laundry in, folded some clothes, loaded the dishwasher, and took out the trash) so I had no real cleaning to do except in the den. When a storm suddenly blew in and knocked out the electricity about four this afternoon, I decided I was done for the weekend. I actually managed to knock off all but nine items on the list, and even got in a seven mile walk this morning. 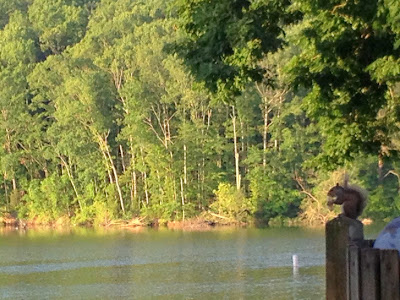 Now I have power, but it is flickering on and off intermittently. I'll start my blog rounds, but if it goes out again, I'm planning to head to bed and fall asleep listening to the rain.
Posted by Secret Agent Woman at 6:49 PM