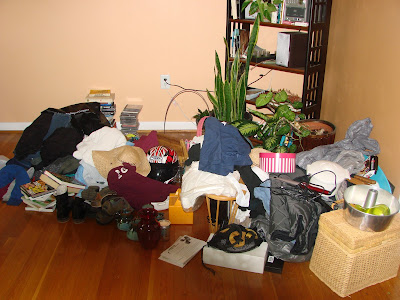 As my younger son and I drove into town to Goodwill this afternoon, the Macklemore song "Thrift Shop" played on the radio. Seemed fitting. I've been piling the things I'm getting rid of in the living room, and took this photo mid-way through the process. I ended up with about twice this much stuff, boxed and bagged and loaded into my car today. Five big full bags of clothing, among other things. It's been interesting to watch the effect on my life of getting rid of things - like when I get dressed in the morning. I used to stand in front of my closet and think that I had nothing to wear. I had plenty, of course, but it took energy to look through and I'd often pull out several things before I found what I wanted. Now that half of it is gone and I like every single thing I have left, getting dressed is easy. I also like not having to move things around to get what I want out of a kitchen drawer.  And even the rooms I've not gotten to (the den and the basement), I've made dents in. I was moving the ironing board this morning to get something out of a basement cabinet and I stopped to consider it.  How many times had I used it since I moved into this house in 2007?  Exactly zero. In fact, years ago an old boyfriend wanted to iron something when he was over at my house and for the life of me I could not think where they ironing board might be. I finally remembered that I'd stashed it in the basement.He was appalled that I could not readily recall the ironing board's location. Apparently I do not iron. Into the pile it went. Someone who does iron might as well get some use out of it. 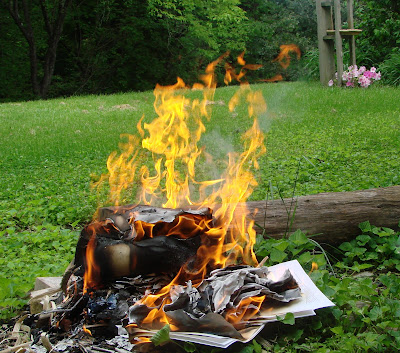 As I made piles to give or throw  away, there were just a few things I could not bear to send to the landfill or donate. Chiefly, Froggie, my stuffed animal from childhood. I know, it sounds horrible to burn your transitional object. Froggie travelled with me everywhere, including family trips to Panama, Canada, Hawaii. Throughout my childhood, she lived on my bed, including at boarding school in Switzerland and even in the dorm when I went away to a University. I loved that frog deeply as a child. So much so that the fabric had frayed to the point of allowing stuffing to protrude in several areas, making me cringe when I looked at her. It was time to let her go. With some old letters I did not want to hang onto as kindling, I made a small funeral pyre in the backyard and sat until nothing but ashes remained. 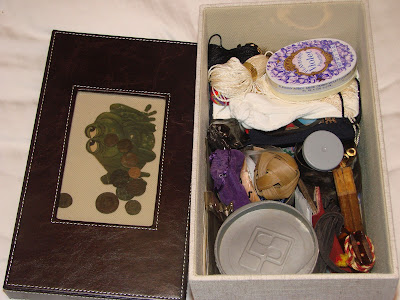 I've really thought hard in this process about the notion of sentimental items. A standard de-cluttering rule is not to keep anything you don't actually have out or in use. But screw rules - my goal was to figure out what worked best for me. Ultimately, I decided to keep some things that were meaningful to me but to winnow them down to one small box. Another de-cluttering rule is not to buy organizing systems of containers. The idea is that organized clutter is still clutter. But I made an exception in this case because I knew it would help me limit what I kept. And because I sure do hate rules. In a 6x6x10 box, I kept the little things. My kids have always loved looking through the bigger box I used to have them in, and ask questions about each item. Anything that didn't still conjure up an important memory, I tossed. As you can see, I still have a fair amount of room left over. 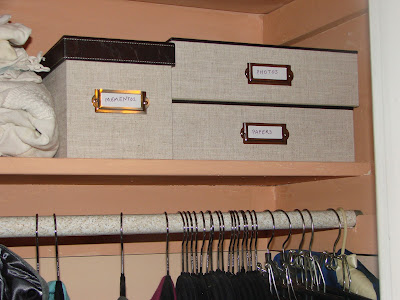 The other two boxes are 3.5x10x12. One holds photos and one old cards, my children's drawings, letters and other paper items. Some time ago, I got a deal on scanning photos and I took the boxes and photo albums my ex had at his house of our family photos. I dismantled the albums and spent a couple of weeks sorting and organizing the twenty years of our marriage in photo form. I finally had 1600 photos scanned and put on a DVD. I kept a small stack of the hard copies and returned the rest to him. I still have some from my childhood to scan and will add that DVD and the few I keep. The two boxes are about three quarters full. And if I want to keep something in one of those categories, it will have to fit, even if that means clearing something else out to do it.
Posted by Secret Agent Woman at 6:37 PM