Lunch with my father. 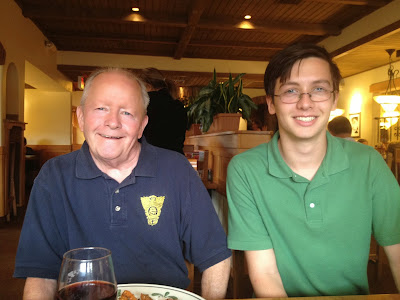 My younger son and I went up to Kentucky to take my father out to lunch for his birthday yesterday. In the midst of a story, he lost the name he was looking for and paused for a long moment, trying to remember. Then he shook his head, laughed and said, "I have dementia, if you haven't noticed."

He is 77 now and seems so small and frail. We walked veeeeery slowly in, with him holding me with one hand and a cane with the other.  A far cry from his hiking, marathon-running, soccer-coaching days when we were growing up. He was always a man of contradictions and being his child was not easy.  He was bright and funny and affectionate, but also abusive and demanding.  The Alzheimer's seems to have drained every last bit of rage right out of him.  I feel like I'm now seeing the personality that would have developed if he'd not had a brutal childhood himself.  It's as if that terrible disease has uncovered his true nature.  He told me he has a nanny at home now, and said he liked her.  He also talked about running into a man from the day program he used to attend and their Annapolis-West Point rivalry.  And he was pleased to hear about my son's plans to get his degree in mechanical engineering, having gotten his own at MIT.

I can tell a noticeable decline in his memory since the last time I saw him, though. Some of the stories we'd talked about on my last visit, he could no longer remember.  And when I told him about going to see our old home in Massachusetts he was confused about that and a little surprised to hear we'd spent a summer on Cape Cod.  When we talked about my siblings, he said, "When you have six or seven kids, it's hard to keep up." He struggled to recall the relationship with his nieces and nephews, saying that he knew they weren't stepchildren but wasn't sure who they were.   And at one point he asked after my mother.  I told him that she was doing well and that she hadn't had any problems with her breast cancer in years. He said he hadn't known she'd had breast cancer, or about her mastectomy, radiation and chemo. He also hadn't known about my cervical cancer although that didn't surprise me since it was recent and I never really talked about it with him.  But he was looking concerned so I said I was fine and that, after all, he'd had cancer himself twice. He was shocked. "I did?!" I said, "Well, yeah, you had prostate cancer." Still looking astounded he said, "Who told you that?!!" I said, "You did!" And I reminded him about having the radiation seeds implanted.  Nope.  Didn't remember that at all. I foolishly persisted, "Do you remember having a melanoma?" And he was shocked again. "I did?!  Who told you that?!!" And again I said, "You did! And you showed me the scar on your back!" Clearly distressed now, he said, "I don't think we should go any further with this conversation." Oh, my. I put my hand on his and said, "Dad, the important thing is you're fine now - no more cancer, everything's okay." That seemed to reassure him and we moved on to safer topics. What a strange experience that must be to lose so much of your memory and yet retain a sense of who you are.

As she left with our order, my father turned to me with a smile and said, "But are you sure it's a red pinot noir and not a white pinot noir?"

That's the Dad I remember.
Posted by Secret Agent Woman at 7:10 AM