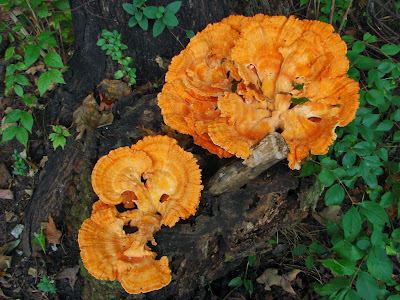 A couple of weeks after I'd taken the mushroom foraging class, I pulled into my driveway and spotted a flash of orange on the ground in the woods.  I thought someone had dropped a piece of bright plastic, so I walked in to pick it up.  Instead, I found these fungi growing from the stump of a rotting tree I'd had cut down.  The bigger one on the right is 16 inches across. The pattern looked like "turkey tails" (trametes versicolor, if you were wondering) but wasn't the right brown/tan colors, so I snapped a picture and sent it to the mushroom guy, Whitey.  He said they were a dead ringer for the edible "chicken of the woods" and suggested I cut a sample and bring it to his both at the farmer's market for a definite ID. 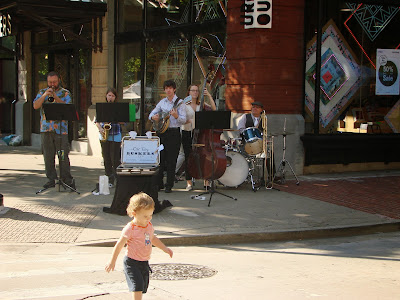 Off I went, past happy dancing toddlers and booths of crafts, produce, baked goods and the mushroom guy.  Laetiporus sulphureus, or chicken of the woods, is apparently one of the "foolproof four" mushrooms for which there is no toxic look-alike.  Whitey had some at his booth, for $12/pound.  I found them on-line for $16.   I told him I'd found several pounds and he smiled at me and said, "You just paid for your class!" 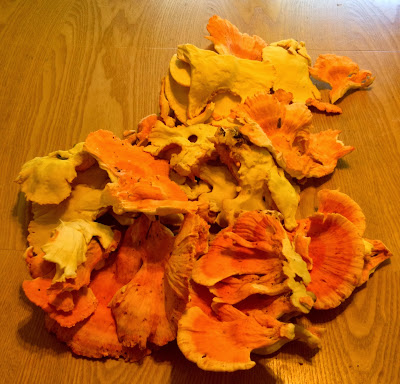 After discussing how to prepare and freeze them, I went home to get my knife and bring in all that I could find.  My initial harvest was over five pounds, and then I went back into the woods to look around a little and found another two pounds or so on a nearby log.  Even after cutting off the tougher parts, I still had way more than the $20 I'd paid to take the class. 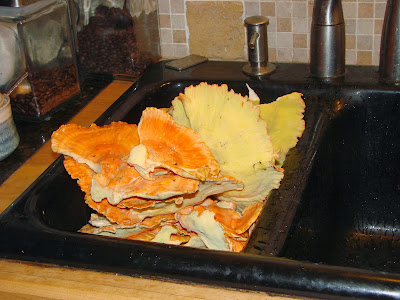 Getting them ready to freeze was easy - you just wipe them off, cut off the thick stems, slice them into strips, and pack into ziploc bags.  I read up on them and discovered that some people have a mild reaction, so to try a small it first.  I sautéed up a batch in olive oil and my younger son and I each ate a couple of bites.  Nothing.  Next weekend he's here, I'll make an omelet with some. 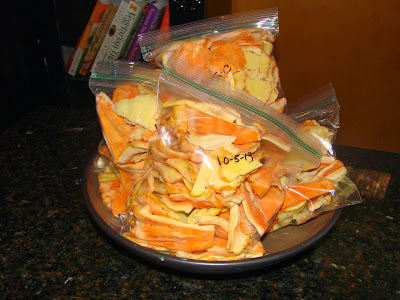 Ironically, cooked mushrooms are on my no-go list of foods.  It's a texture issue.  For me, it's like biting into a slug.  Which is even more ironic since I actually like escargot.  But with this bonanza I decided I was going to un-learn this particular food phobia.  And they were good - the texture is meaty and they have a taste that is vaguely lemony.  My son said they tasted like eggs to him.  But there is no hint of the icky texture of the canned mushrooms I grew up hating, so I'm definitely going to be eating these.   After all, how often does your yard hand you about 80 bucks worth of gourmet mushrooms?
Posted by Secret Agent Woman at 5:55 PM