Both I hold within me. 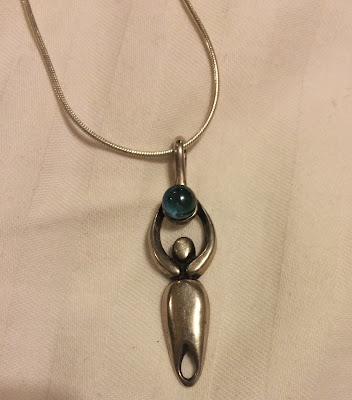 I bought this necklace when I turned 40. Whenever I need a reminder of quiet strength and wisdom, I wear it. I like the simple lines of the goddess icon and the stone looks as if she is holding all of the Universe in her hands. When I am talking to patients I sometimes use the image of dipping hands into a creek or the ocean. If you grab tightly in an attempt to hold onto the water, it slips through your fingers and is lost. But with hands open and submerged, you hold the entirety of the water in your hands. It's a metaphor, of course, for acceptance and non-attachment. So hard to remember when you want something badly. 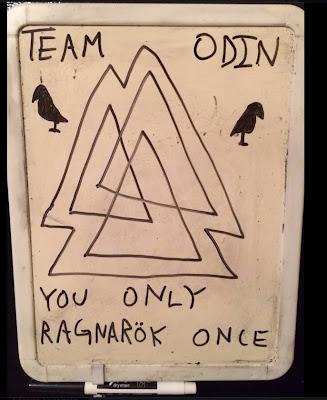 My older son drew this on the whiteboard that is meant to hold a running grocery list and other notes. I haven't wanted to erase it.  Ragnarök is the epic battle foretold in Norse mythology which will bring out about the deaths of Odin, Thor, Freyr, Loki and other gods. It's an apocalyptic event, with natural disasters and then a regeneration of the world. A contrasting metaphor of painful, loss-filled conflict which leads to rebirth. Both themes have meaning for me - the need for peaceful acceptance and the growth born of struggle and loss. 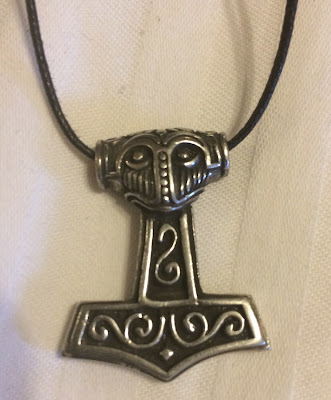 When I discovered at Thanksgiving that my last name was of Viking origin, I had to think about what that meant to me.  They were not a peaceful people and did some rather awful things. But who doesn't have both good and bad in their family tree?  I count among my own forebears both slaveowners and slaves, for instance. So I wanted to look for what I could take from my own name, which I sign and say many times every day. The Normans, disreputable though they may have been, were fierce adventurers.  I added another talisman to my collection, a mjölnir - the hammer of Thor. I wear it when I need to remind myself to to venture out fearlessly.
Posted by Secret Agent Woman at 8:00 PM