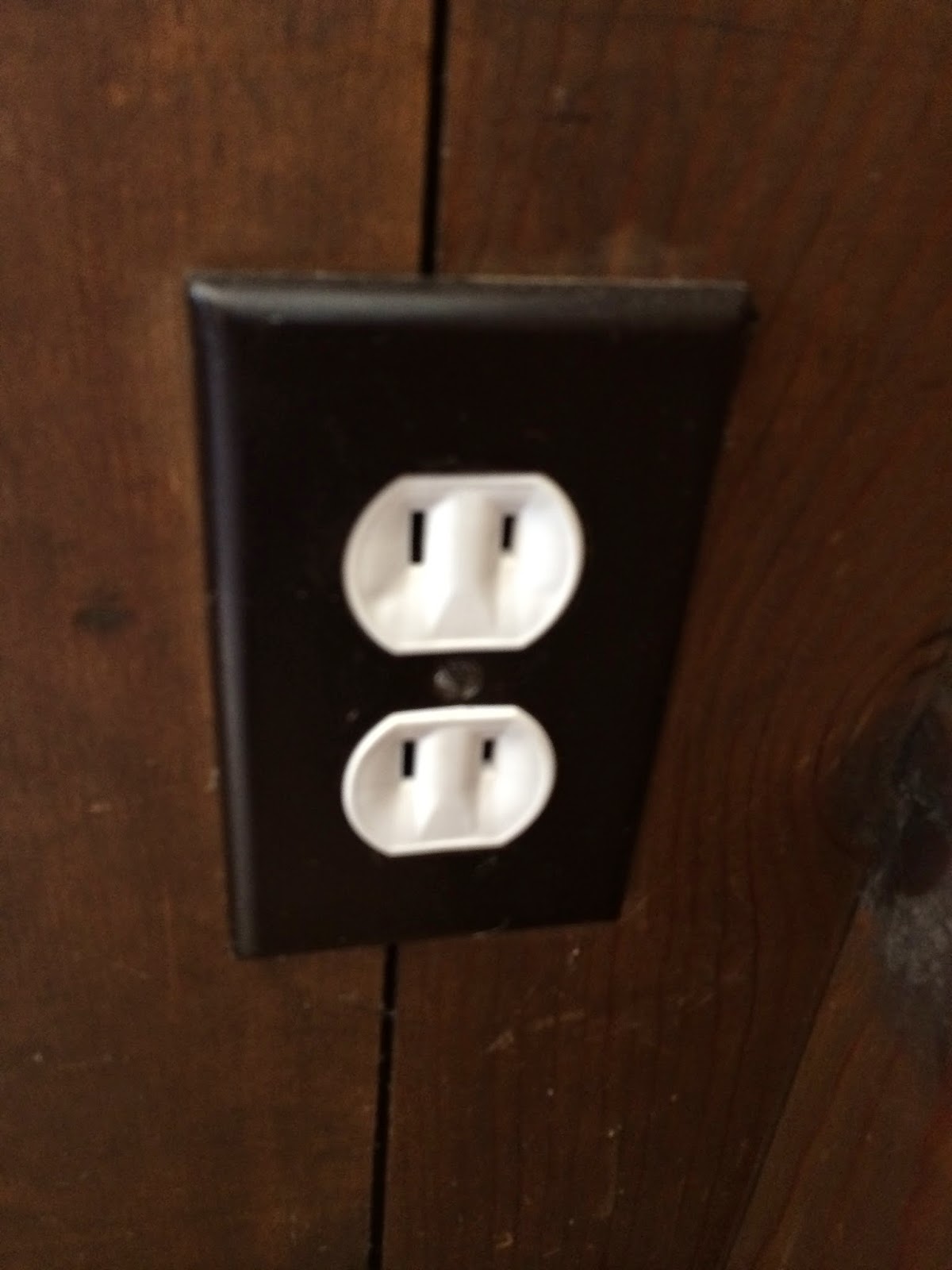 Let me say up front that I can get entirely side-tracked by minutia. When the electricians replaced the ungrounded three-prong plugs with old-style two-prong plugs to make it meet code, all of them were white. Which was fine except for the sunroom. 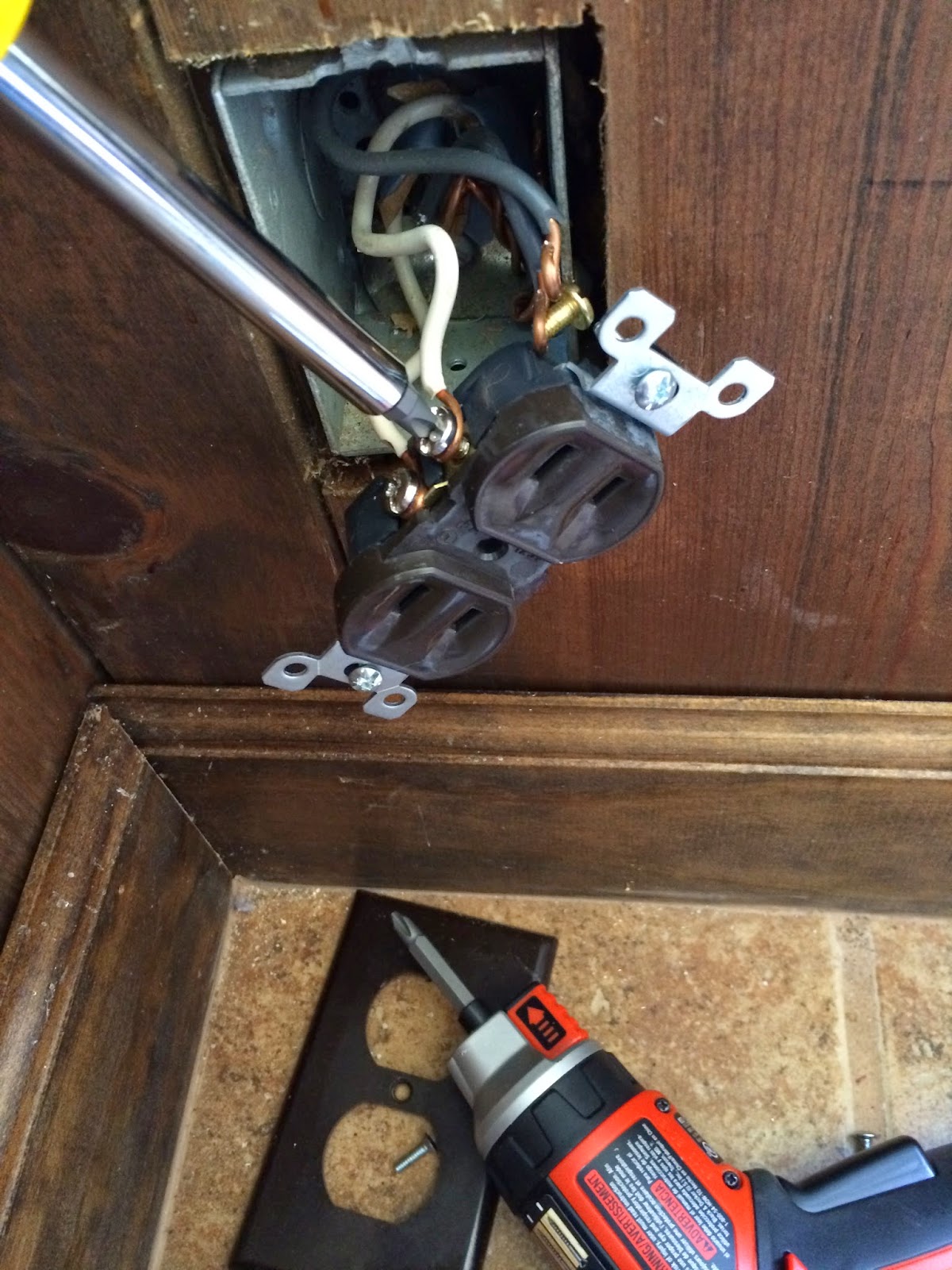 Enter Amazon, where I was able to order brown replacements and wire them in myself. As I was working, I was careful to note first which wire went where. Important since some of the outlet boxes had two wires, some four and some six. 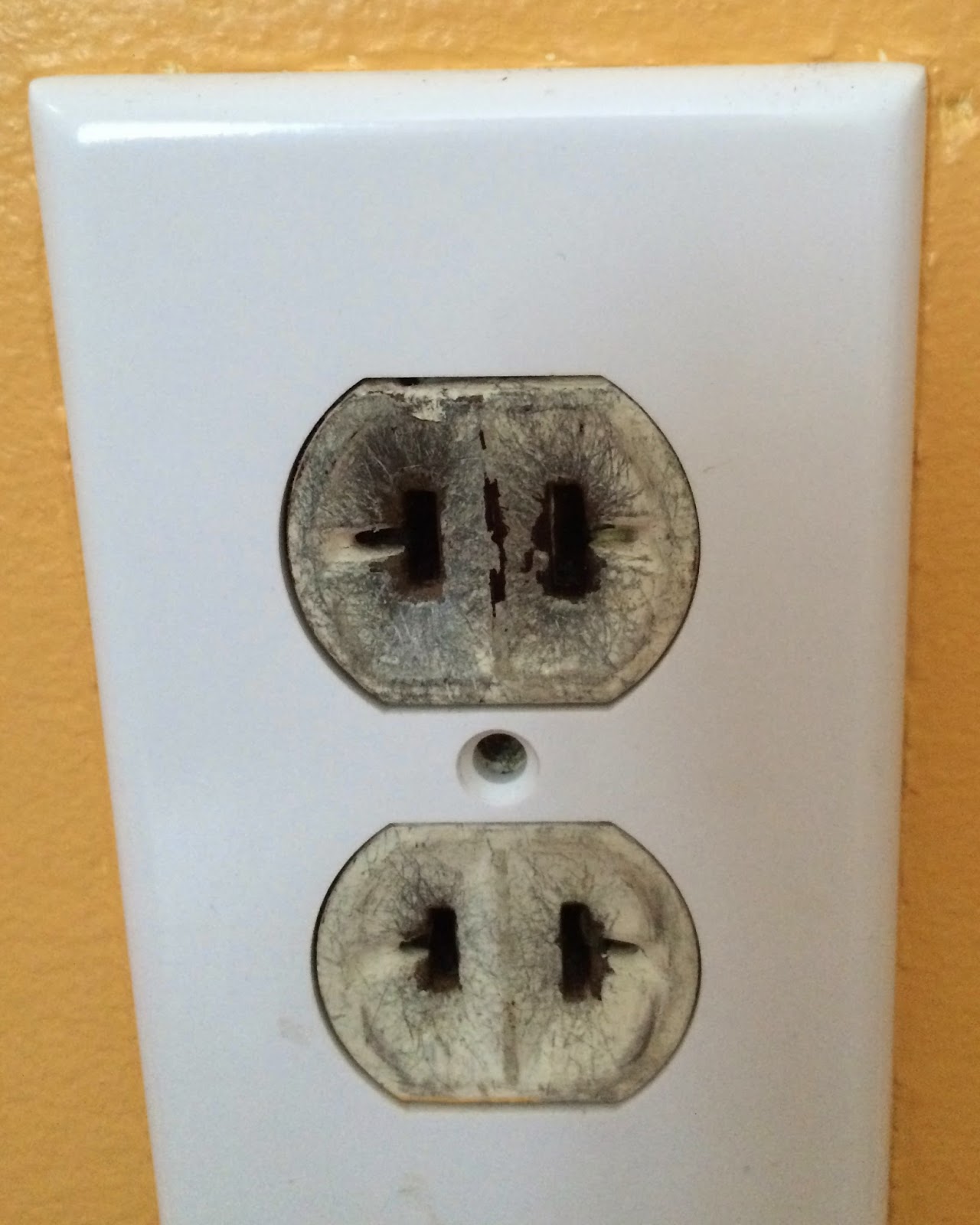 The white outlets I removed from the sunroom went to replace old outlets that were just dirty and/or painted over.  It took way longer than I was expecting because that old wire is nearly unbendable. In some cases I had to soak the painted screw heads in mineral spirits to loosen them and one even had to be removed with needle-nosed vise grips. 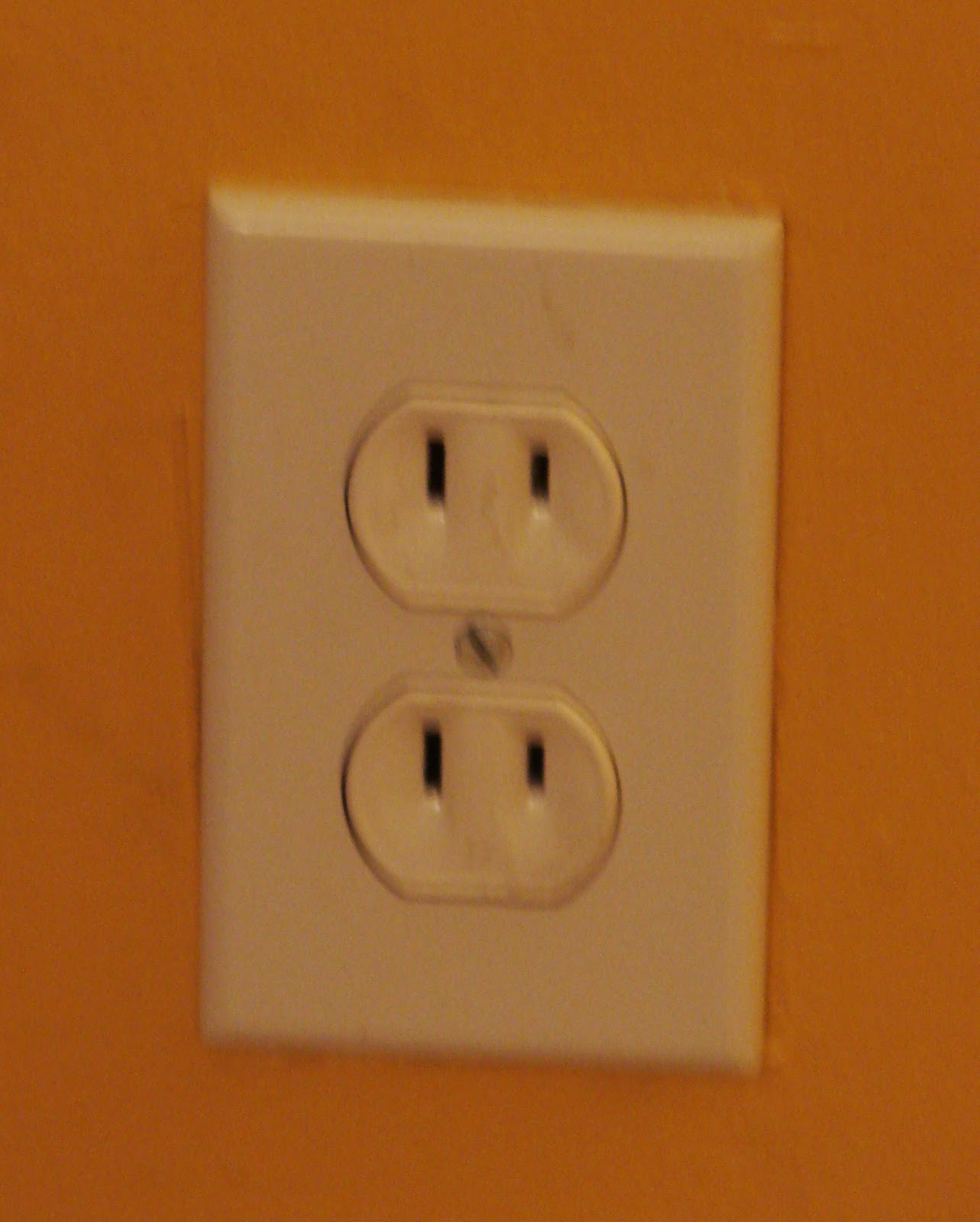 I'm so skittish about electricity that I just cut the power to the whole house whenever I do any work that requires wiring. Just in case the house was originally wired by a lunatic or the labels on the circuit box aren't entirely accurate. This means I have to work during the daytime. 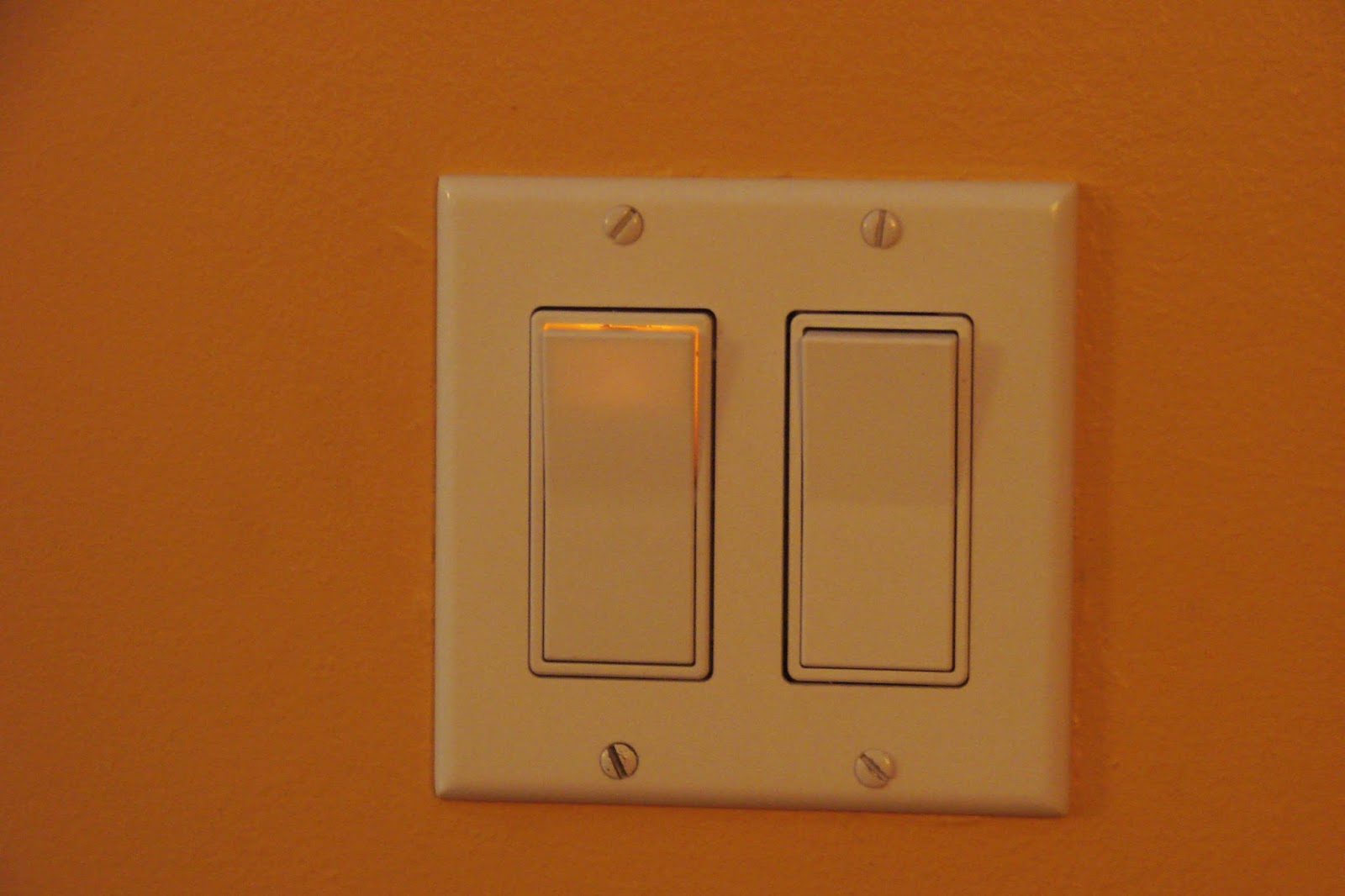 All the light switches were the standard toggle sort and I replaced them all with these more modern rocker types. No real reason except that I like them better. For the living room light and the bathroom, I put in a lighted switch so I could find it in the dark. In all, I wired in 13 outlets and 9 light switches. 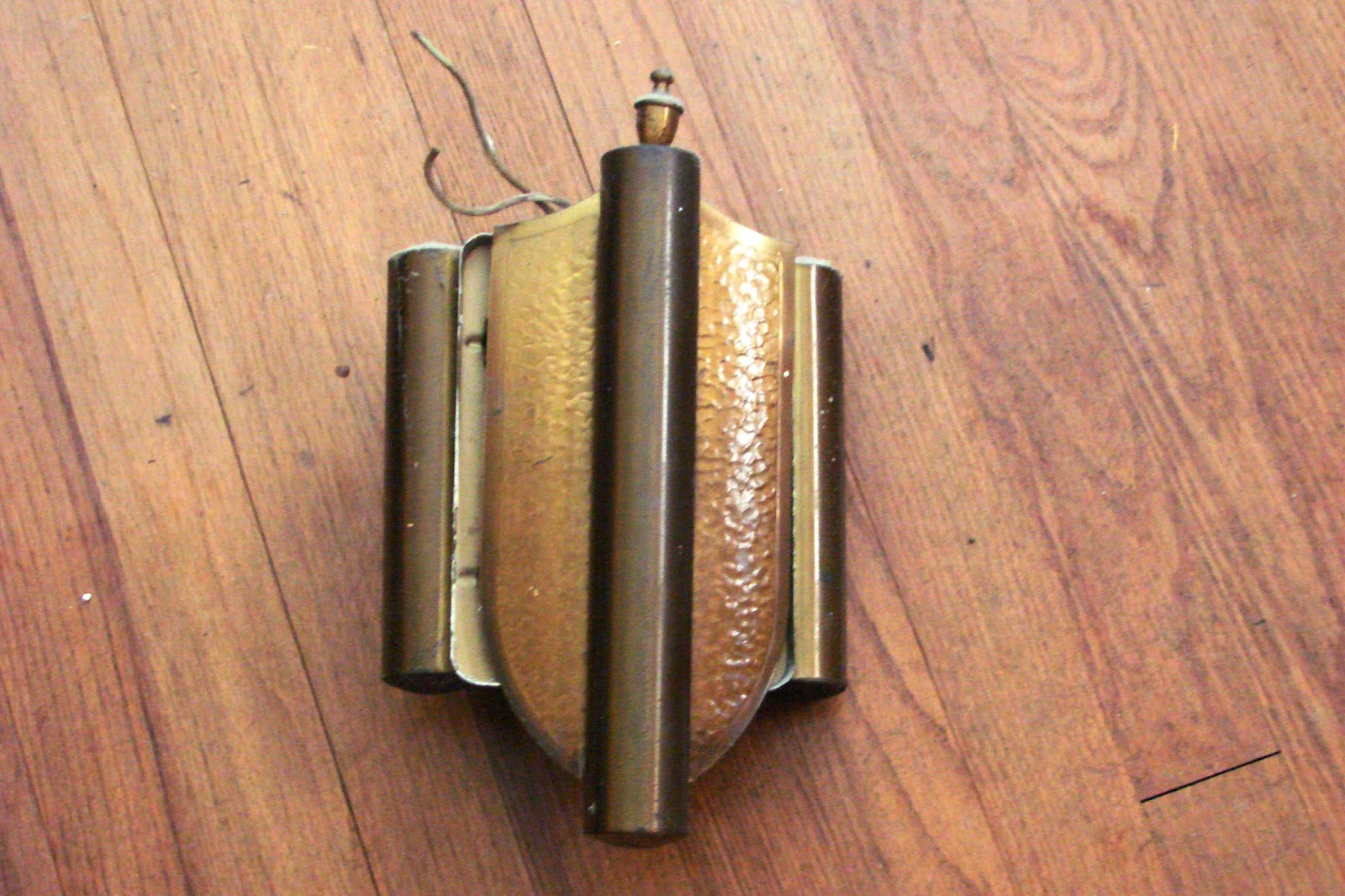 The doorbell was broken (and ugly) and on a couple of occasions I've looked outside to see someone patiently standing at the front door, thinking they had rung the doorbell. I yanked it out of the wall and painted over that spot and also removed the push button outside. Now people know to use the door knocker. 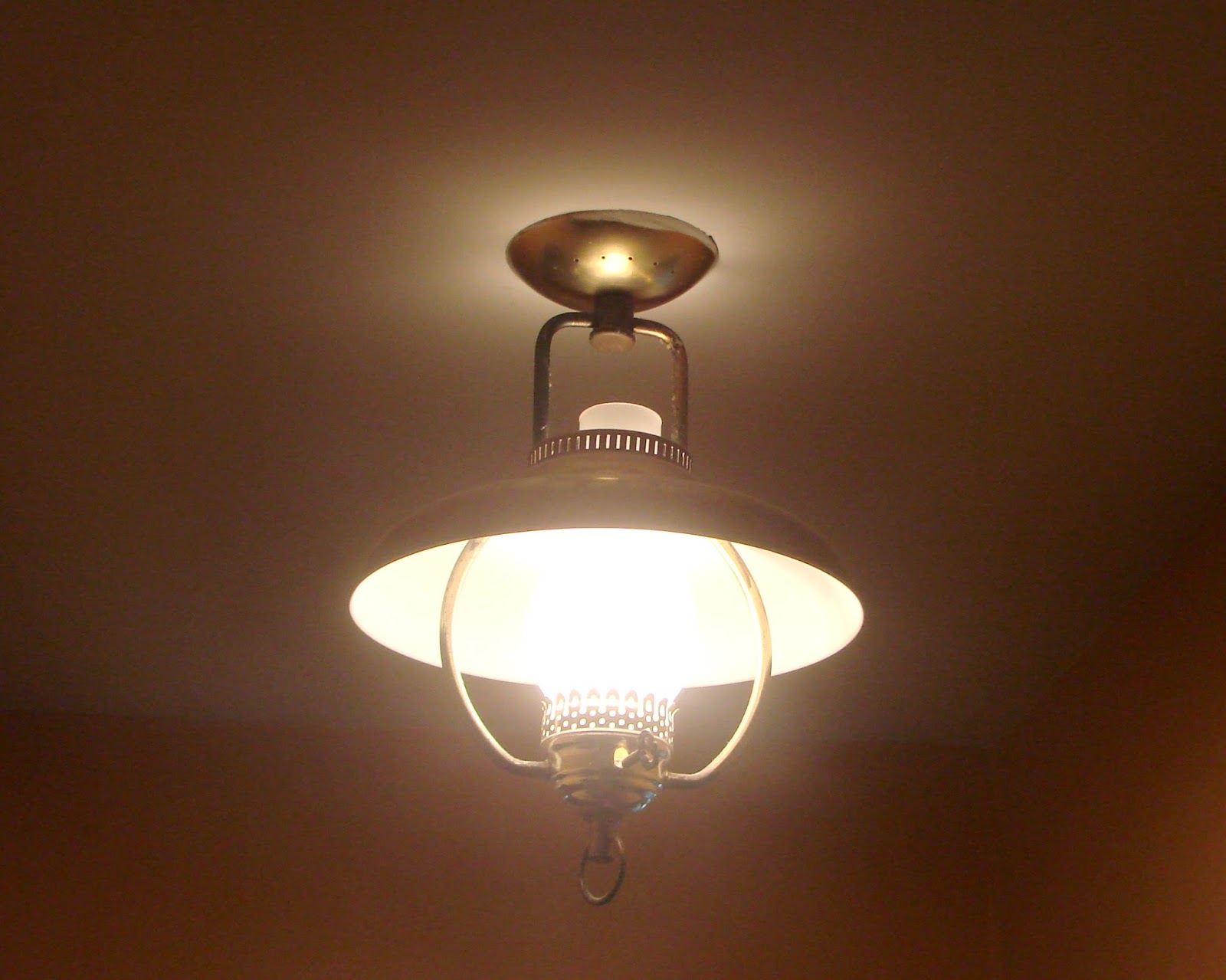 This was the hall light. The day we moved in, I glanced at it and had this conversation with my younger son:
Me: "That's got to go."
YS: "Why?? It's shiny brass!"
Me: "Because it's shiny brass."
YS: "But, Mom! Brass is as close as you can get to gold!" 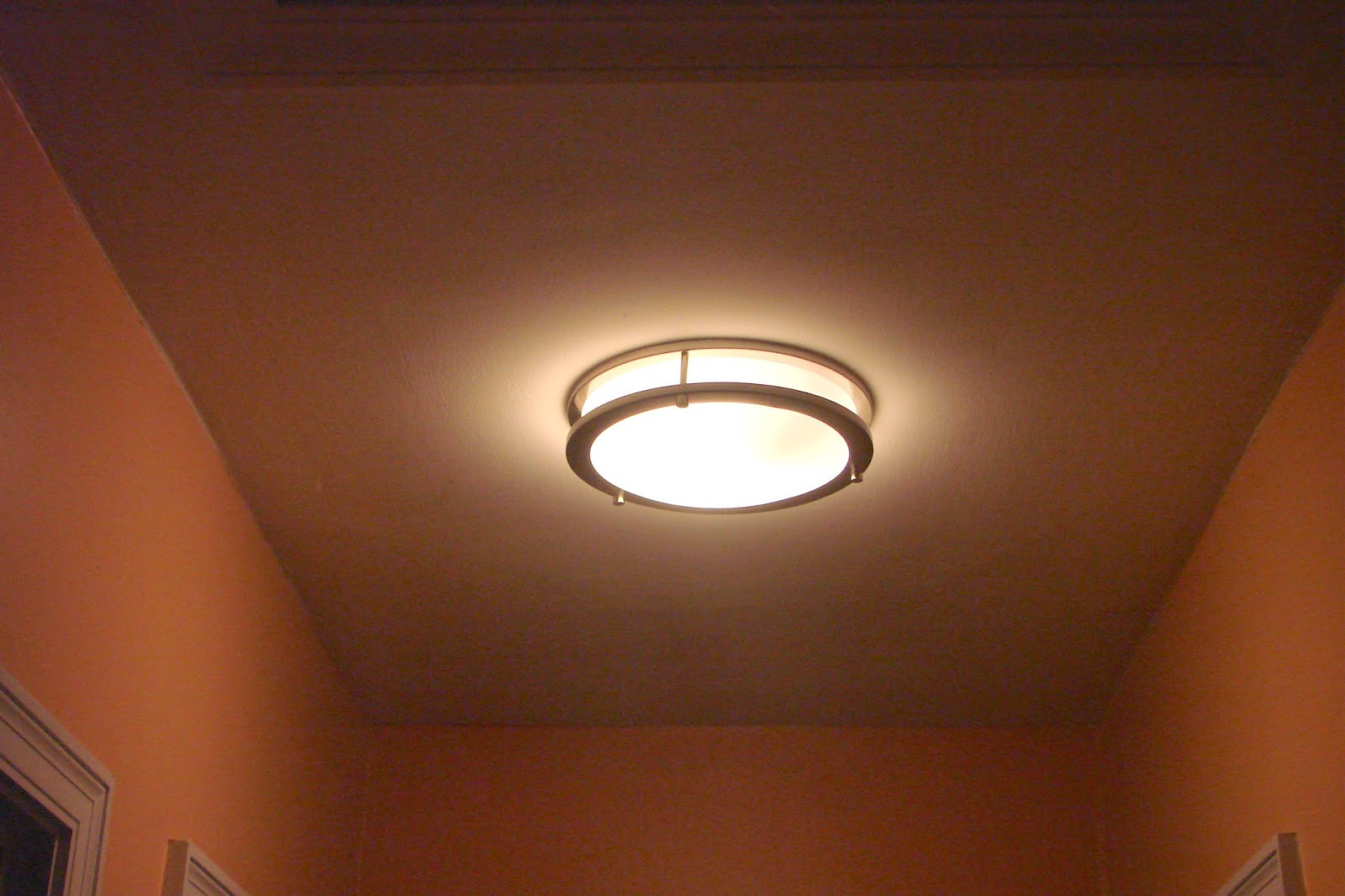 Exactly. It was absurdly difficult to remove the old lantern-style light. This new one, though, was fairly easy to wire in. 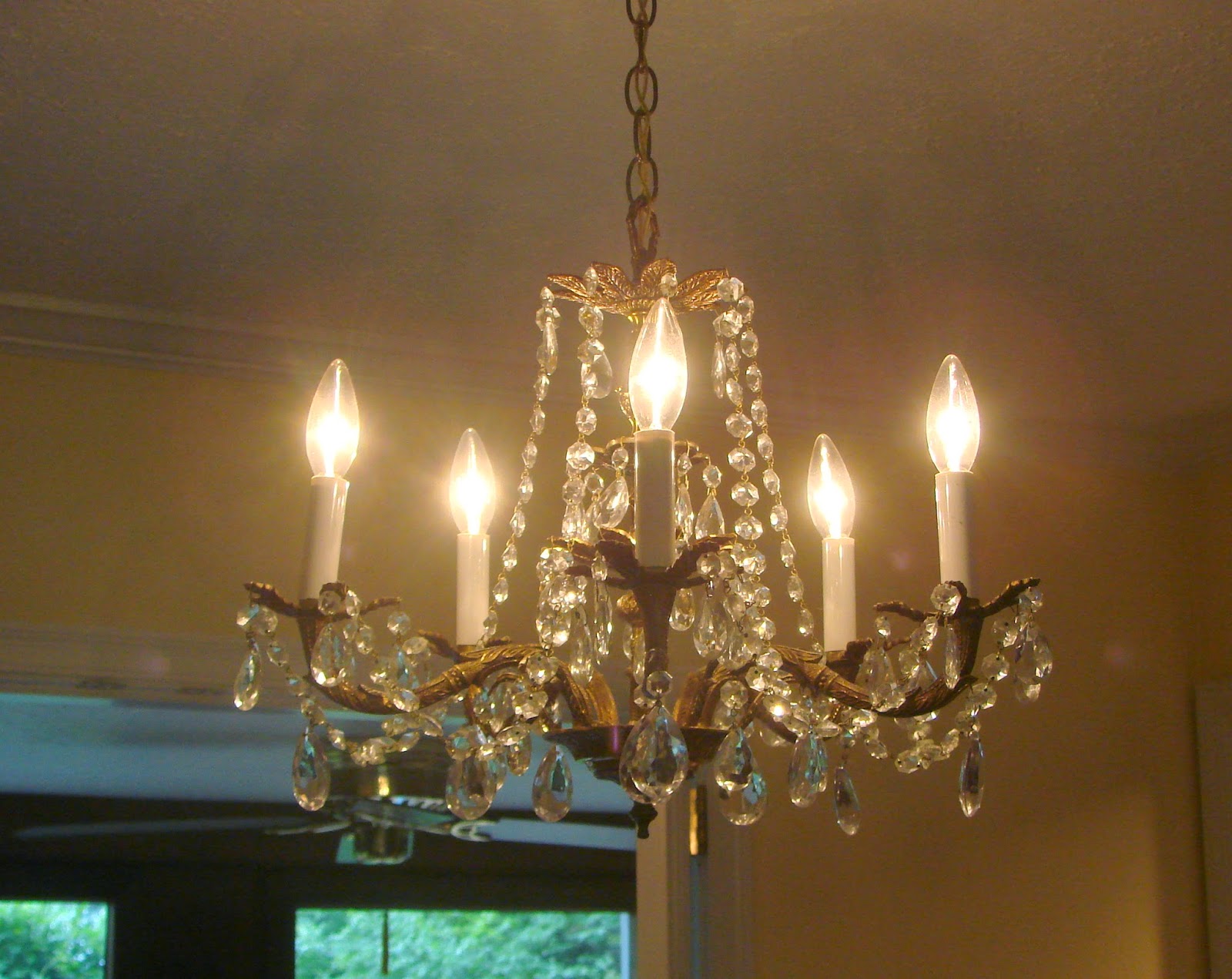 Another example of old and fancy, but in this case I decided not to keep it. I actually find it kind of appealing in an over-wrought sort of way, but crystal chandeliers are so not me. My grandmother always wanted one and she would have wept to know I took it down without a second thought. I got on-line to order a replacement since I couldn't find what I wanted in the stores I checked. When they said it shipped from China, it turns out they meant that literally. I had to go to the post office to sign for it. 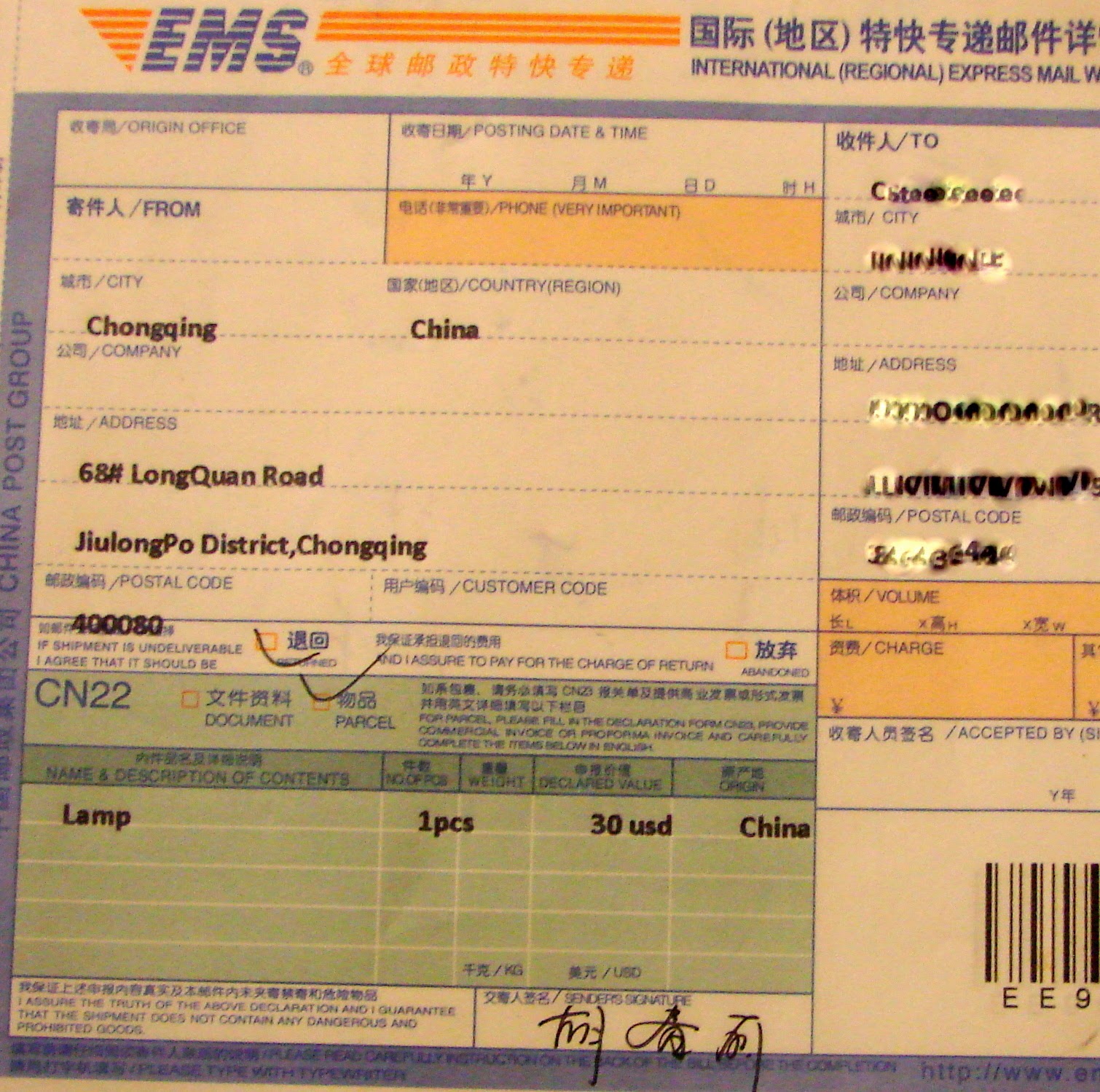 This is the paperwork with the lamp in its entirety. No wiring instructions at all. Nothing mentioning that they use different colored wires than we do or that the fittings were a different size than what is standard here. No hanging hardware at all, either. I dug out my tool box, took a deep breath and just figured out a way to hang it. 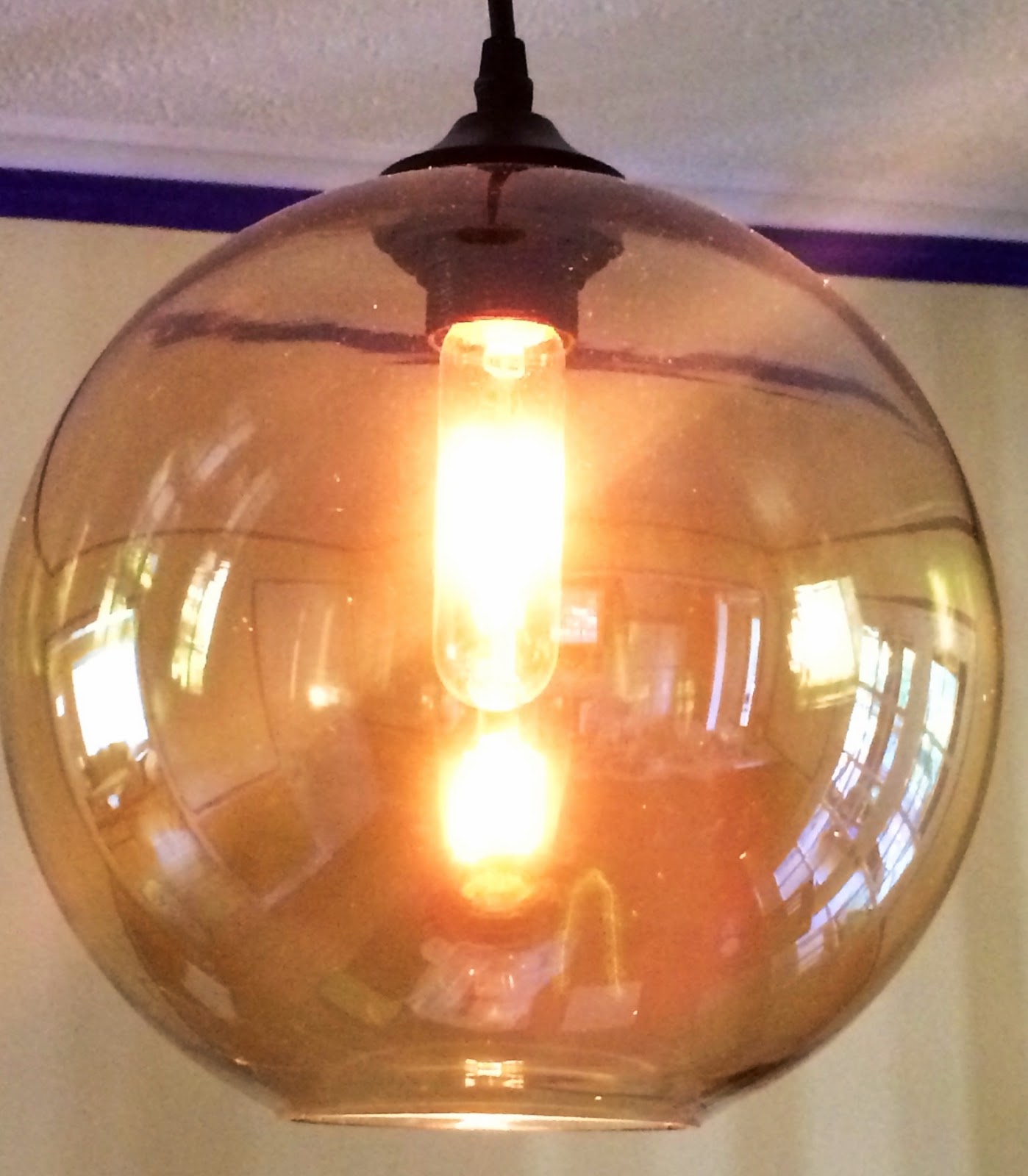 It reminds me of one of those balls of amber that has a fossilized insect encased in it. Which may not be a positive image for everyone, but I do like this glowing lamp.  I was looking for a dining room lamp that made me think of honey and this was it.
Posted by Secret Agent Woman at 2:25 PM