And then more work. 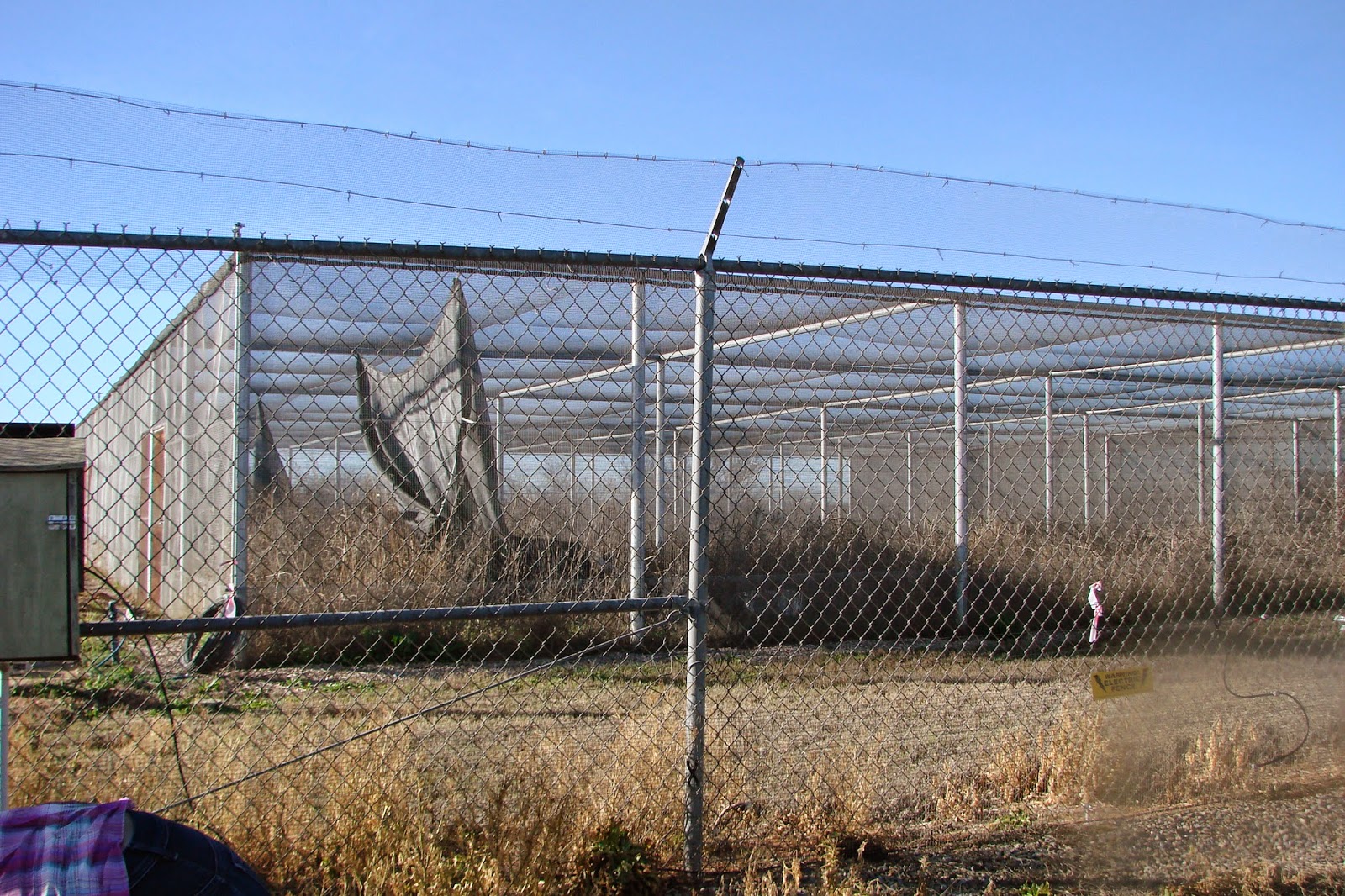 Thursday of that week we got to choose a project - more fence-clearing or working on the flight pens. The latter task sounded like gardening so I picked it. I didn't think about the expected high of 81 degrees or the utter lack of shade. I'm going to admit up front I chose wrong. 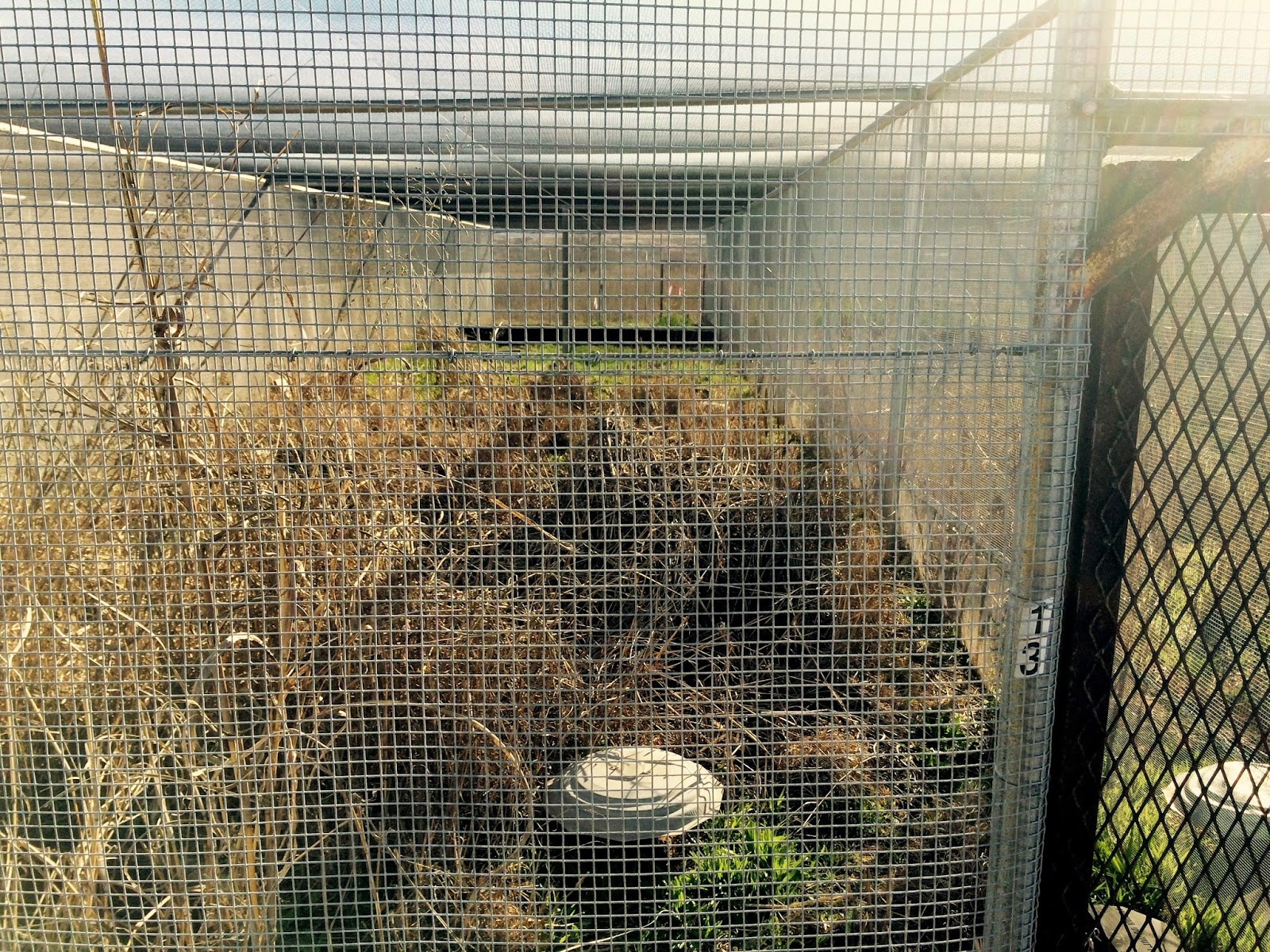 The Refuge is working to reintroduce an endangered species of quail, the masked bobwhite. Nearly extinct in the 1960's, the remaining birds were taken into captivity in an effort to preserve the species. Some exist in the wild now and there is a breeding population on the refuge (17 of them) being kept in small cages. The idea was to clear out these larger pens so they could breed in more natural conditions. We were facing 16,000 square feet of brush in the cages, some of it taller than we were, in hard-packed dirt. 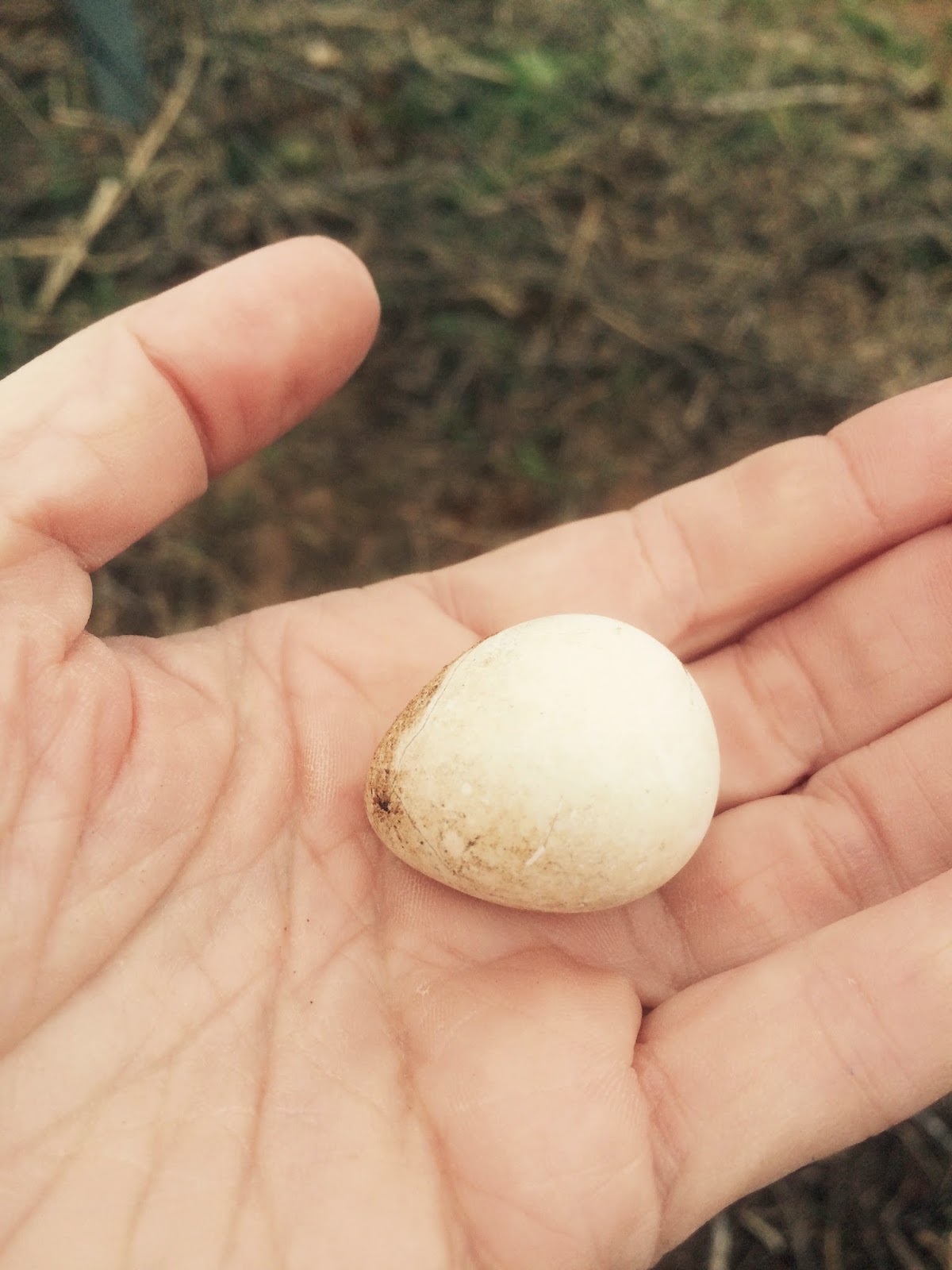 There were old eggs still in the nesting areas. One of the volunteers had one explode on her. I'm told it wasn't pleasant. 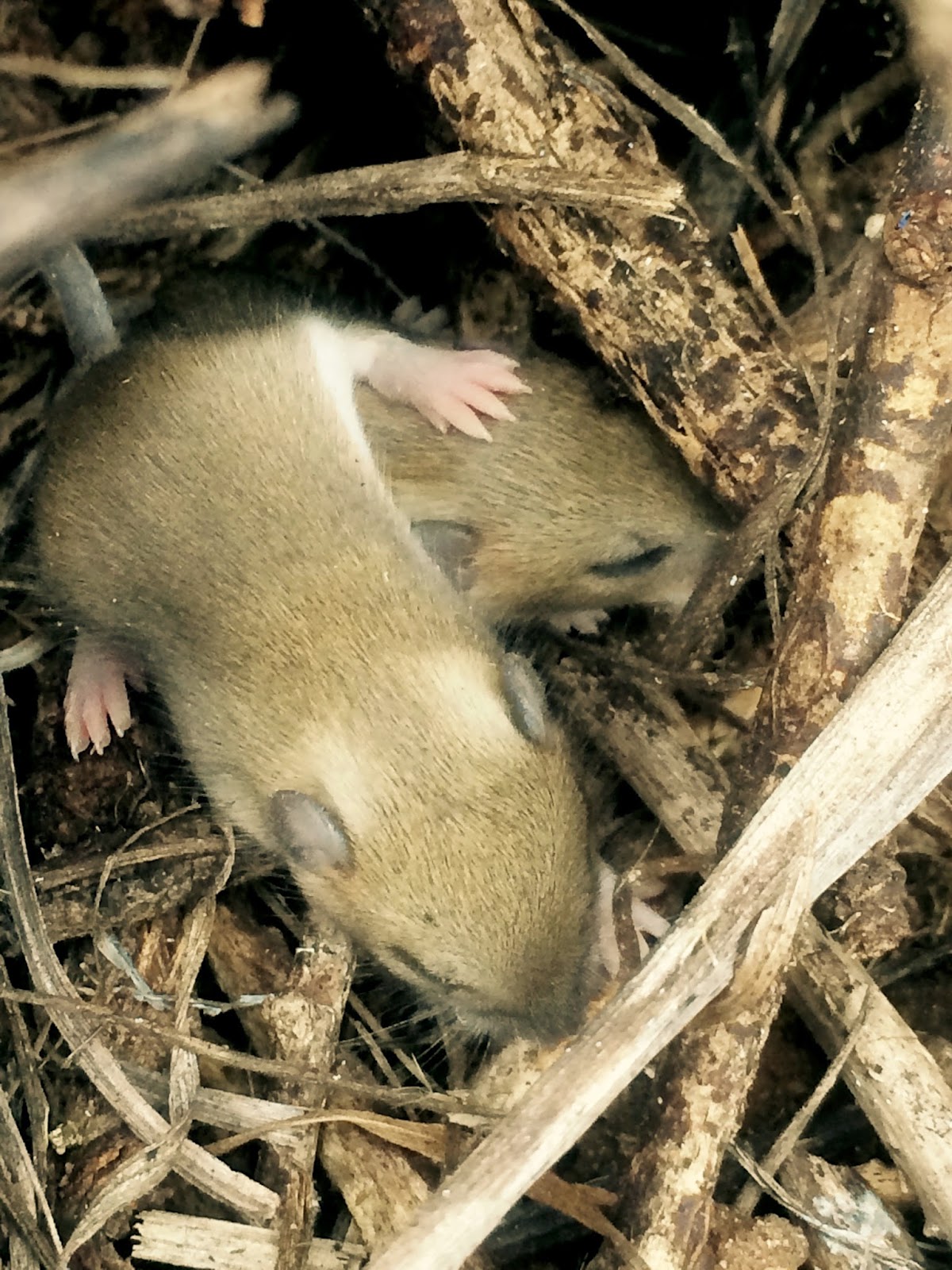 The brush had to be chopped with a hoe and then raked. As we were dragging some brush clear, a mouse with several babies still clinging to her ran toward the stick tipi where the birds nest. The babies dropped off and the mama mouse squeaked anxiously from the shelter. That wouldn't do. I caught the shivering babies and transferred them into the shelter in the hopes that their mother would collect them. 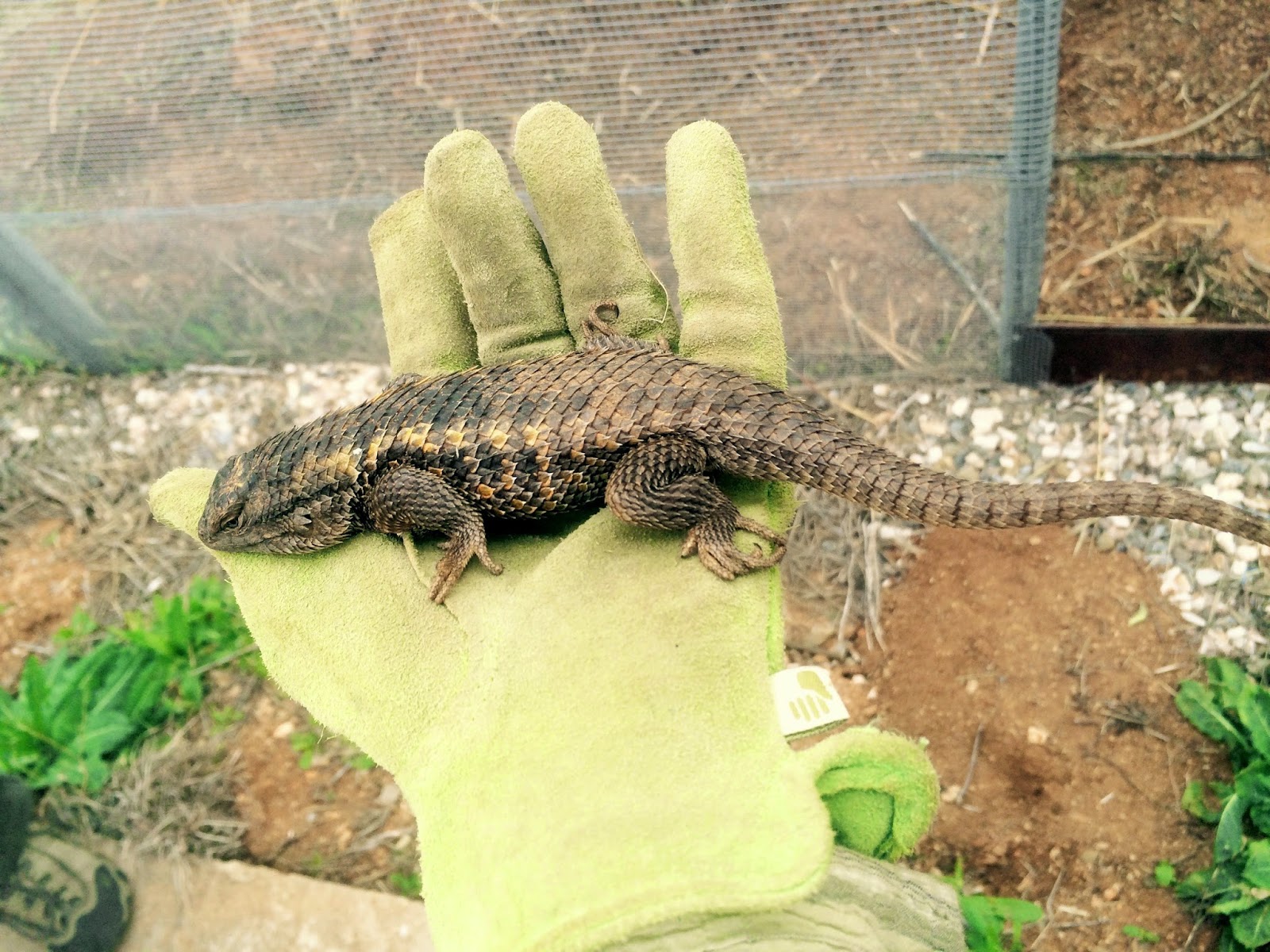 I also found this spiny lizard, who was sluggish in the cool morning. I put him in a safe place, too. 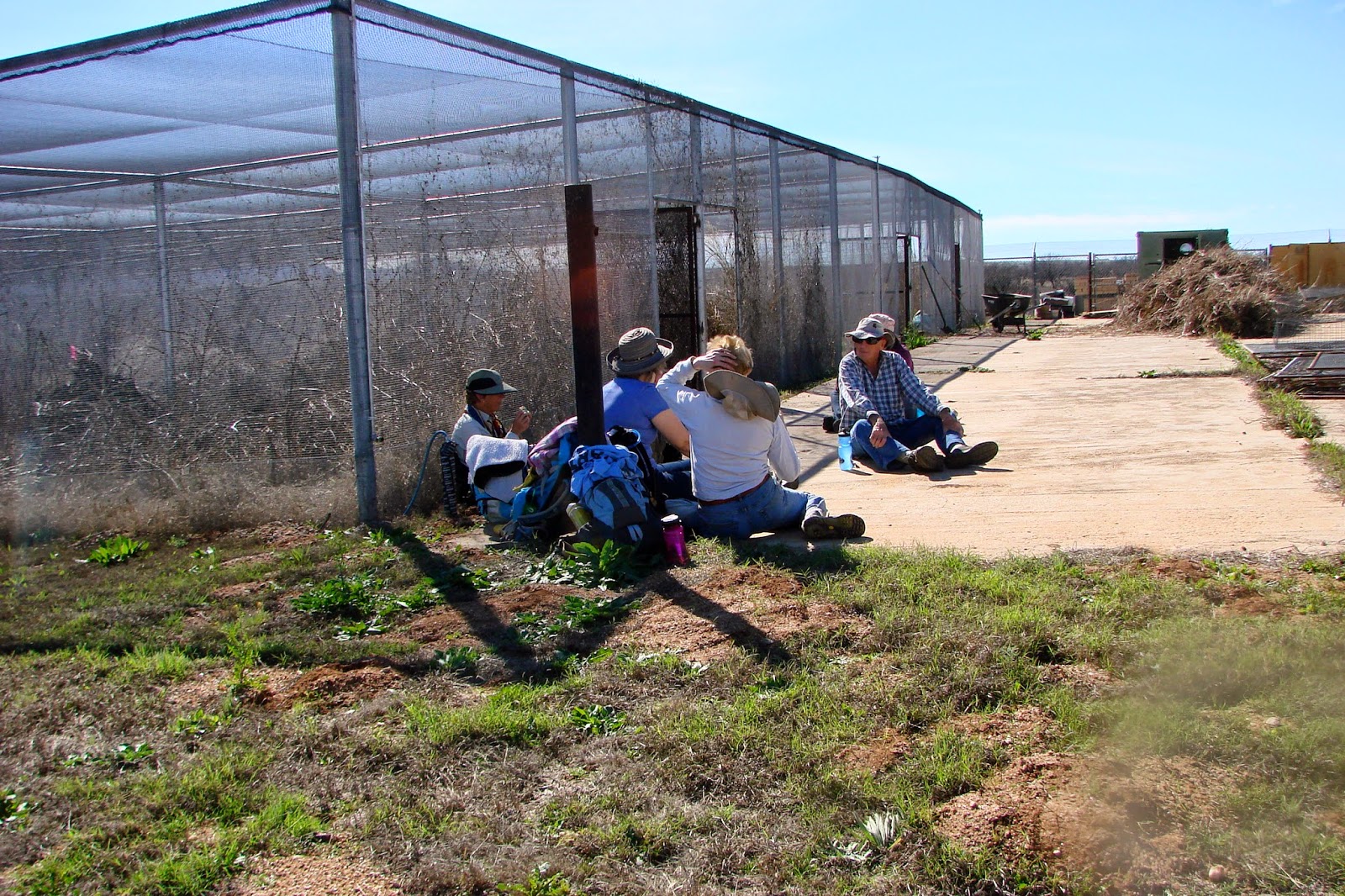 It didn't stay cool long, however, and our small group was tired by noon. Even water breaks were in the full sun. Add to that lung-choking dust, prickly brush and an endless supply of cockle burrs stuck in our clothes. 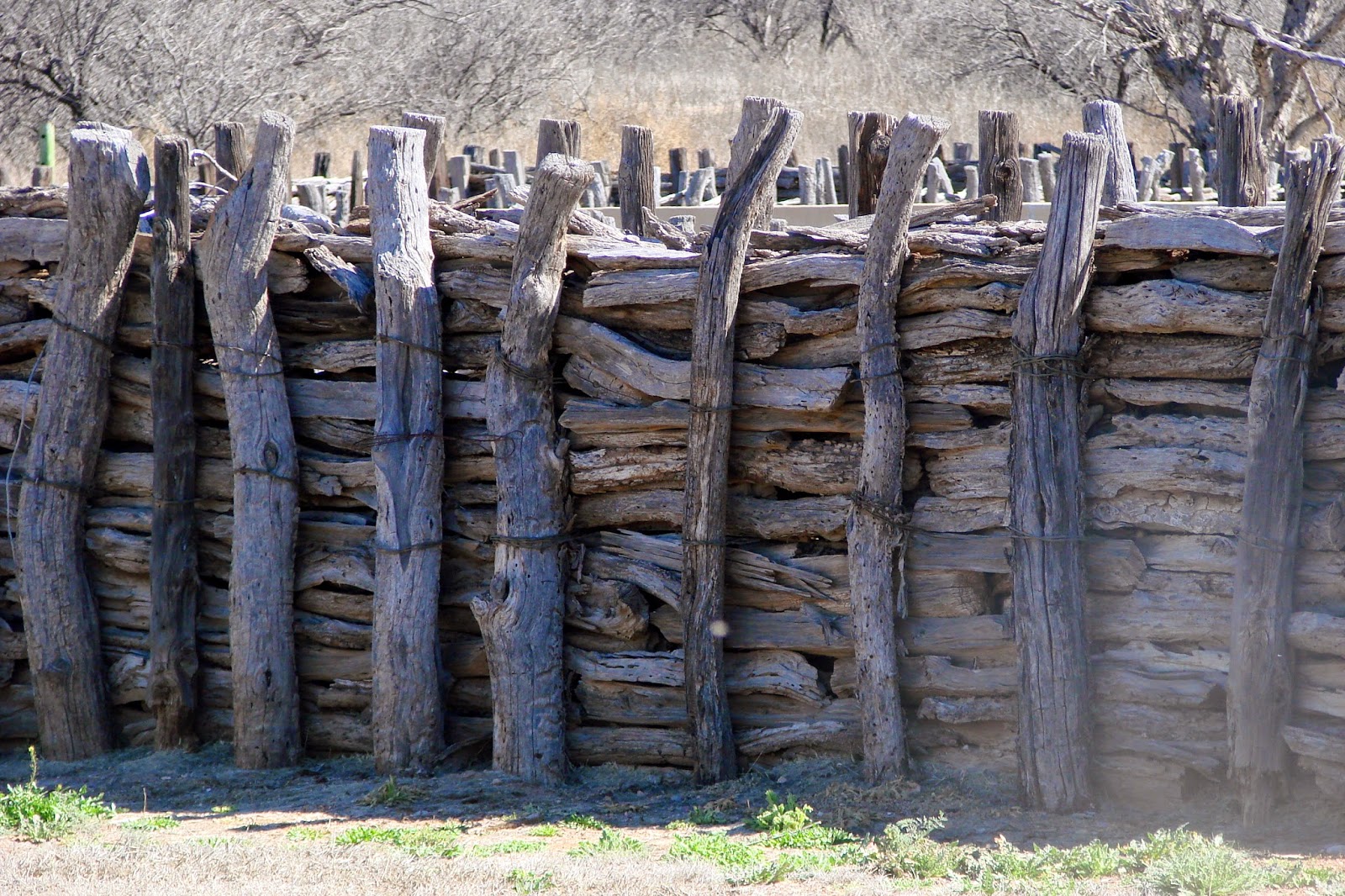 At lunch we went back to the Visitor's Center for a bit. I took a walk along the original fence of the old cattle ranch that was bought by the Refuge in the 80's. My main goal for the walk was to have a chance to make a phone call and whine about the exhausting work. Okay, it might not have been my finest moment. 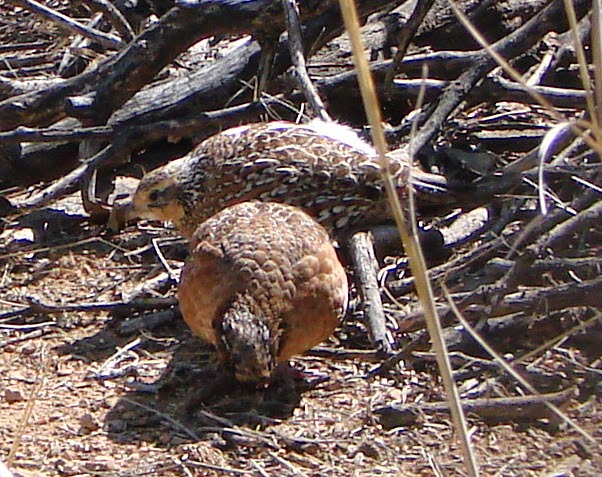 I went into the Visitor's center to ask one of the naturalists about the quails we were dong all this work for. He offered to take us to see some of the older quails they have penned separately. These ailing quails weren't expected to live long, so they are being allowed to live outdoors to mimic natural conditions. Seems to have perked them up because apparently there is a little breeding going on. Here a couple of bobwhites the naturalist lured out of their shelter with some seed. 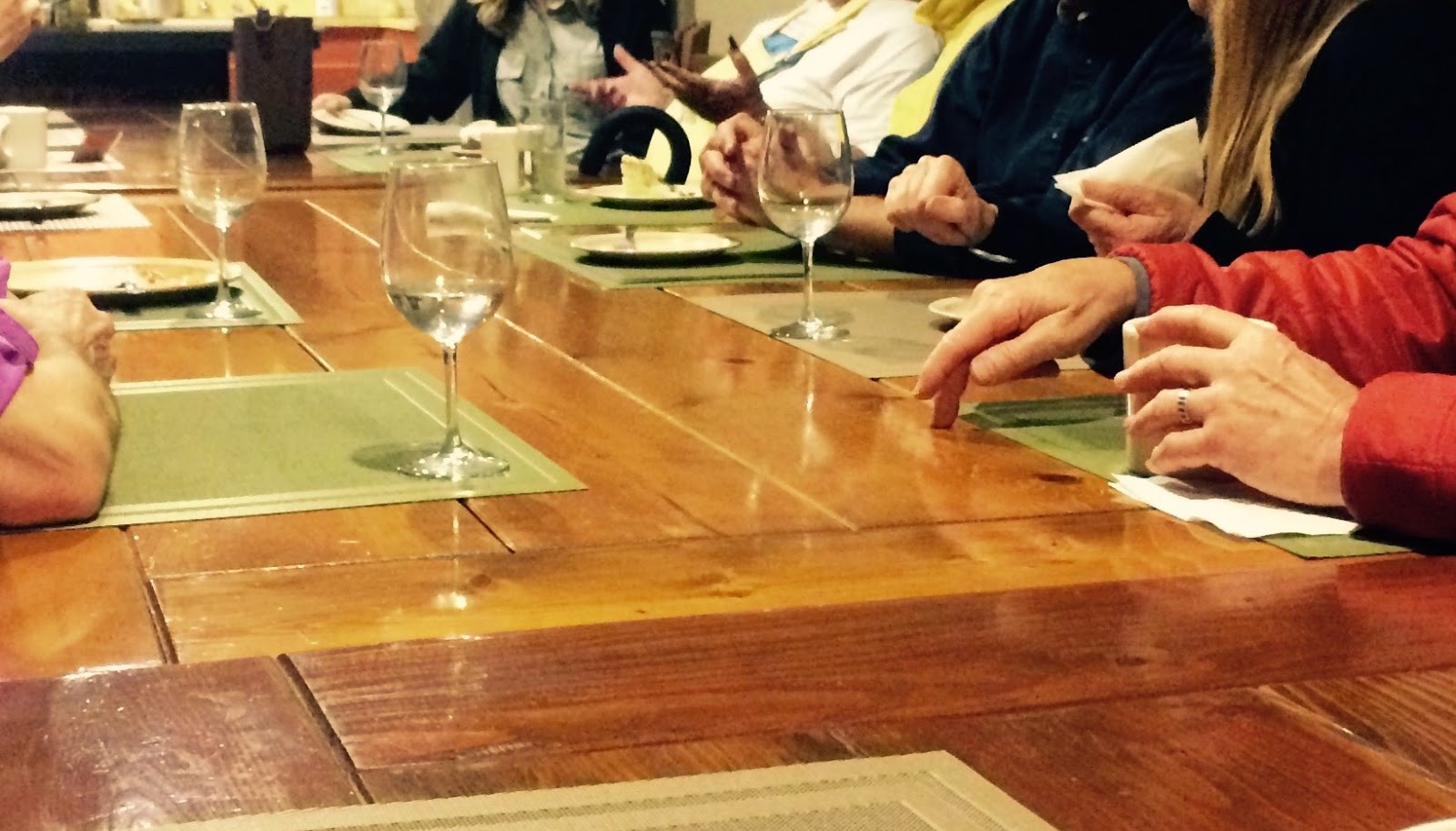 We got four pens cleared that first day and I was more than ready for a shower and dinner when we got back. Our leader had brought cases of wine for nightly wine tastings. All reds from Napa and Sonoma. She was a bit of a wine snob, so all good vintages, each with a story. One night she made us say what we'd been doing the year the wine was bottled before we could taste it. For 2006, I said, "That was the year my marriage was wrapping up." She clinked my glass and said, "Here's to the intervening years." 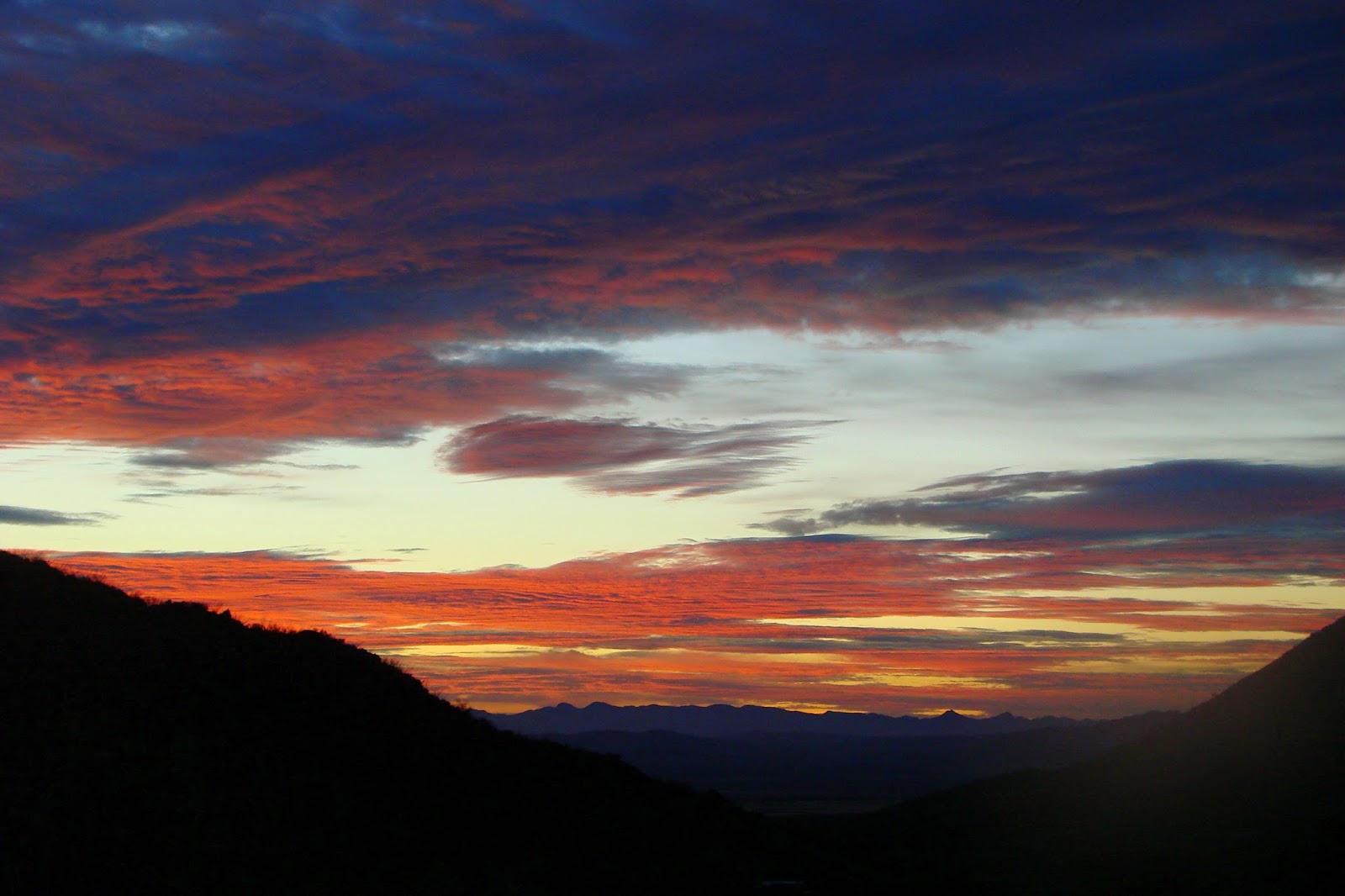 A group of us sat for a while with our glasses of wine watching the sun set over the canyon. I have to say that the conversation with this group was often lively. While rolling barbed wire with one of the older women, for instance, we started talking about past relationships. At one point she laughed and said, "I have NEVER slept with a Republican and now I'm starting to question your judgment!" 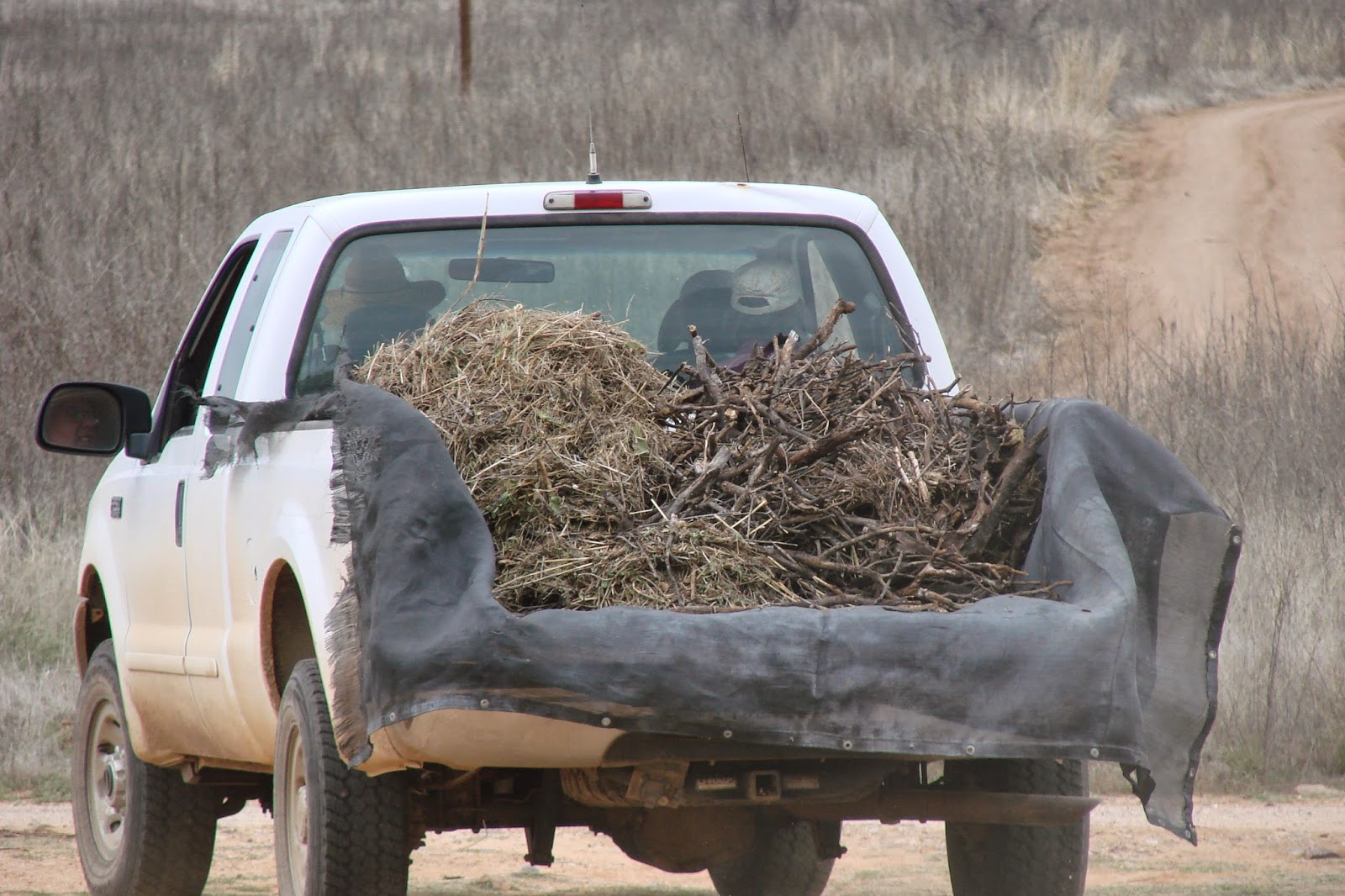 On Friday the entire crew went back to finish up. Raking, hoeing, dragging brush by the armful - truck load after truck load hauled away. It was slightly overcast so the work was a little more enjoyable. 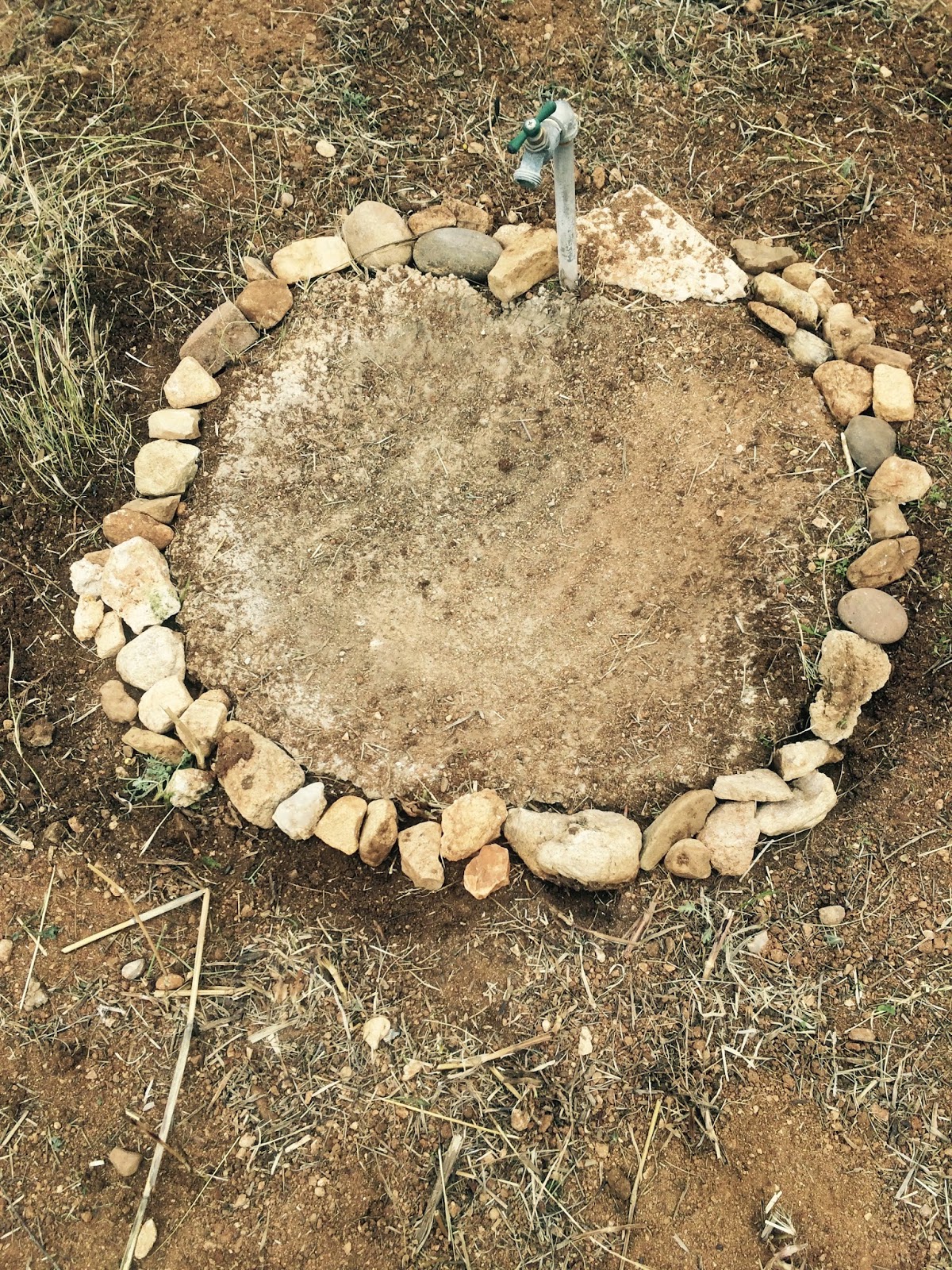 We collected up rocks in the pen and used them to ring the water pools. 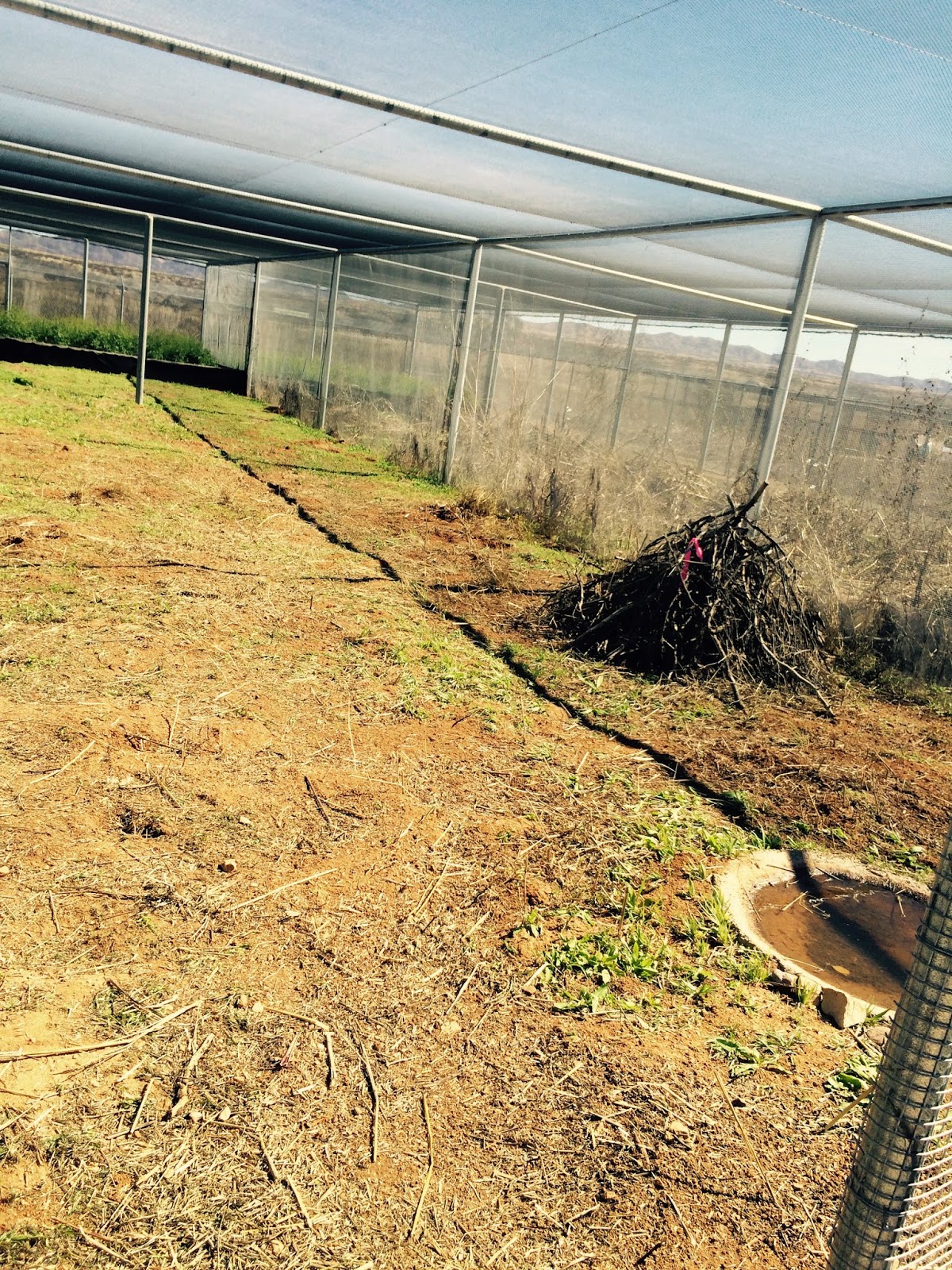 A pen that has just been cleared. The shorter green vegetation was left, but everything else had to go. We were absolutely determined to finish them all before we left. After we'd cleared the last flight pen, we stood for a moment to survey our work. The naturalist in charge of the breeding program was a little choked up as he expressed his amazement over how much we'd accomplished in two days. It was good to know that it wasn't just busy work and I love the idea of the bobwhites relocated from their cramped cages into these huge pens. The plan had been to return to the visitor's center to eat a late lunch, but the five of us who had ridden in with the assistant leader decided we'd rather head back to the lodge. We were trying to get him to spill information about that evening's plans and he just shook his head in his affable way and stayed quiet as he drove carefully along the rough road. Since I was in the middle of the front seat, the others told me to "use your feminine wiles on him." I leaned my head on his shoulder and said, "Come one, tell us, pleeeeease." He said, "Get off me, girl! (and then glancing at the speedometer) "Oh my god, I just got up to 70...(turning to look at me) and it's only been a week!" We all laughed heartily at this. So I don't have invisibility, x-ray vision or flight. My superpower is apparently "feminine wiles."
Posted by Secret Agent Woman at 9:49 PM