Taking a deep breath and jumping in. 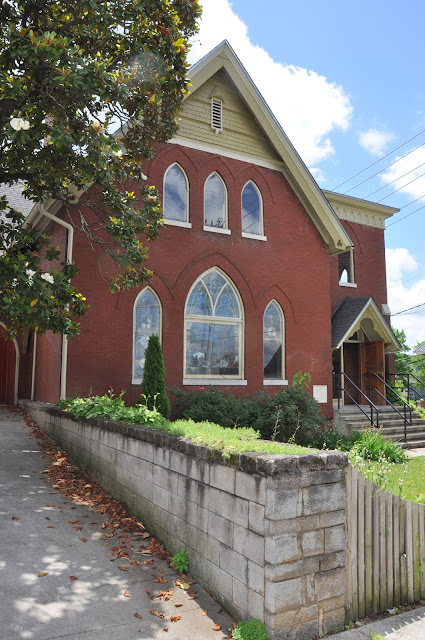 A few Fridays ago, we got the key to this little theater, a former Presbyterian church built in 1898. By that time, the food was all made, and all we had left to do was set up. We did all of it ourselves - made hundreds of mini-quiches, another hundred triple chocolate cupcakes, sliced cheese, and put out crackers, fruit and other finger foods. Earlier on Friday, I had bought flowers to make arrangements and bouquets. Actually, the arrangements were mostly from various white flowers in our yard. I had baby's breath with stalks of pale mint for the girls. For me 21 (for the wedding date) cream-colored roses with a spring of rosemary tucked in for luck. They were simple bouquets, with stems wrapped in tulle and ribbons. We hung the tulle and satin backdrop we'd made, put out chairs, set up the tables for food and drink. Saturday morning all the kids were there for a walk-through and to help. They moved chairs, assembled cupcakes and that sort of thing. My older son's girlfriend did my hair for me right before the ceremony. The time seemed to fly by and soon we were preparing to walk down the aisle. When it was my turn, the violinist and guitarist switched from the Celtic music they were playing to "Maybe I'm Amazed." 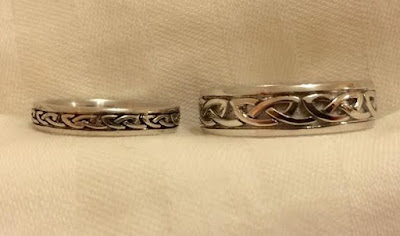 We finally got to take out the wedding rings we'd stashed away after we had them made for us in Galway. We'd decided to dispense with the traditions we weren't thrilled with, including tossing my bouquet. My older son suggested I go ahead and throw it so he and his brother could get into a brawl, but instead, right before the exchange of rings, I had my older son's girlfriend come up on the stage to take my flowers. We actually did the “with this ring, I thee wed and promise my love” part in Irish Gaelic. We wrote our own vows, and part of mine were also in Gaelic. Each of our vows ended with "I love you," and when he finished his, I said, "You better!" Everyone laughed, as he responded, "You bet!" And then we did a handfasting, an ancient Celtic and Nordic tradition that symbolizes the voluntary binding together of two equals. Our children were our attendants and with each of the promises we made, one of the kids stepped forward to wrap a ribbon around our clasped hands. (I've decided it is time to be a little more circumspect about other people's identity, so you'll just have to picture our beautiful sons and daughters, dressed in our colors of gray/silver and pale blue.) 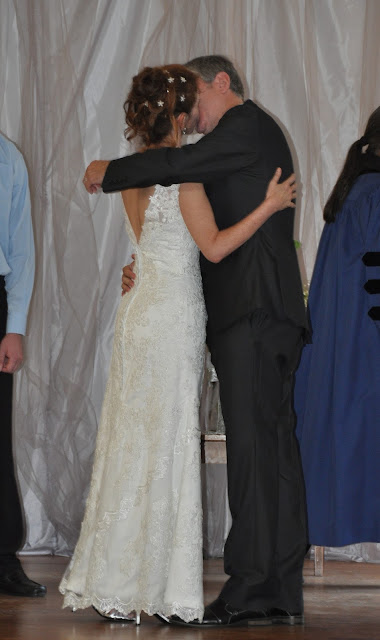 And then all that was left was a kiss as the musicians began playing the Who song, "You Better You Bet." 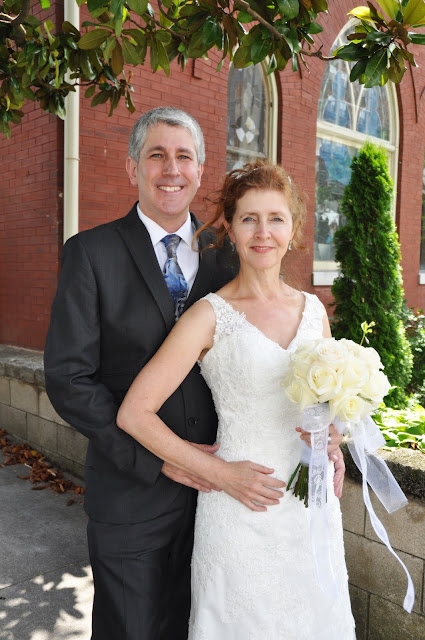 Newly married, right outside the church. We didn't spend much time on photos, because we wanted to be with the family and friends who were there to share the day with us. 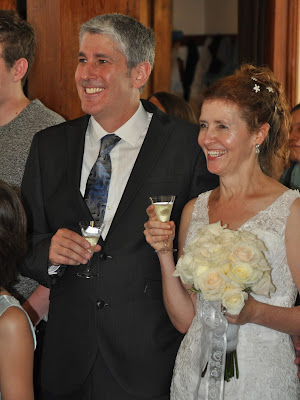 So pretty quickly we headed back inside for a champagne toast and to talk with everyone. Okay, yeah, we were happy. 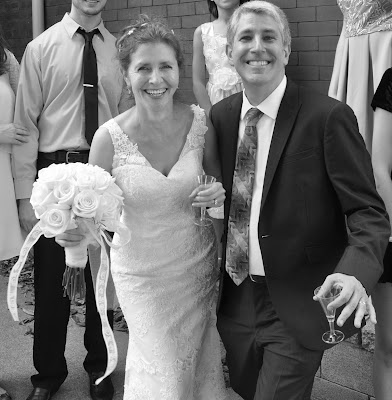 We did take a few family photos outside. My brother-in-law is a photographer and in this photo with my sons, their girlfriends, and his daughters, we suddenly both jumped toward him, laughing, and he captured that moment. This is actually my favorite photo of our new family from the wedding. 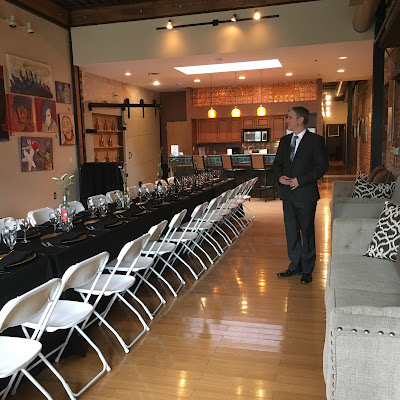 Our family stuck around after the early afternoon wedding to clean up and haul stuff over to our house. We had a reservation for a family dinner later that night so in the meantime we decided to go for a walk downtown and had a drink up at a rooftop bar. Still in our wedding clothes, we got many congratulations and someone bought us an Irish whiskey. My new mother-in-law had offered to finance a family dinner and we had reserved a room at a downtown restaurant. Unfortunately, when we stopped in to check on our menu, they'd turned it into a used book and record store! We had no idea how lucky that snafu would turn out to be. They offered us this much better private loft, waiving the fee and slashing the prices on bottles of wine.  So instead of a small area in a restaurant, we had this beautiful space for the 30 of us. 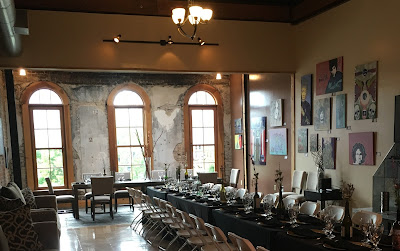 The loft overlooked downtown, and we sat with all our kids (and their girlfriends) up at the head table by the windows. We had appetizers  first - baked brie and bruschetta - and then four menu items to choose from. I had the salmon, which was delicious. 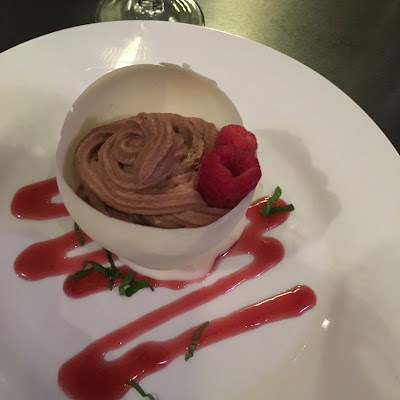 Years ago, the restaurant had a wonderful chocolate mousse that they no longer offered. I asked if they could make that for us, and they prepared it in white chocolate cups. More champagne and then it was time for people to go. 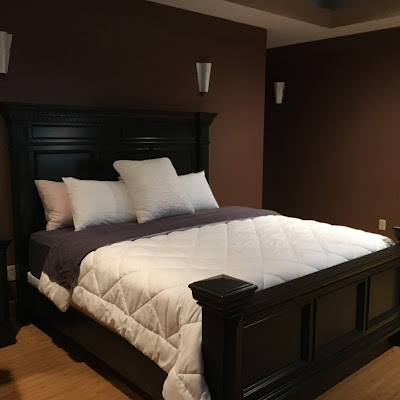 Because as part of the loft, they also gave us this room so we could stay the night.  Many of the family went back to their hotels but my siblings set up camp at a table on the square, continuing to drink and catch up. (Safety note: they all had hotel rooms within walking distance, so no one was driving that night). We decided to take one last stroll around the square and when we saw them, we elected to stay outside for a bit. 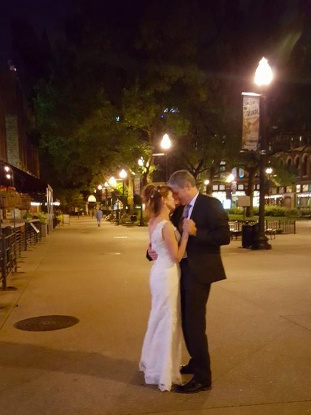 A strange busker, singing mostly country songs, had parked himself nearby and played a song so we could dance. And then, bizarrely, he told us his last song of the night was just for the newlyweds. He pointed at us and said, "This is for you kids" and then launched into ... wait for it ... the Scooby Doo show song.  Take a bunch of folks who grew up on cartoons of the 70's, ply them with plenty of alcohol, and you've got a crowd laughing and singing along. 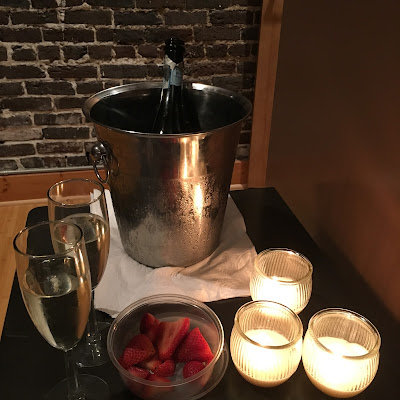 But this was waiting for us in our room and finally my new husband said, "Are you coming upstairs with me or do I have to scoop you up and carry you?" 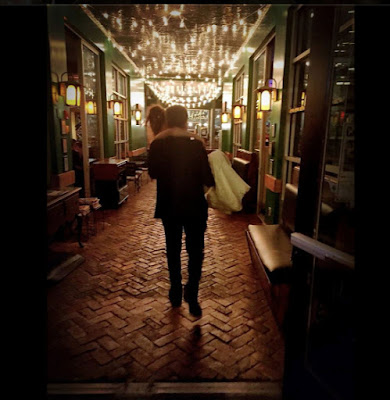