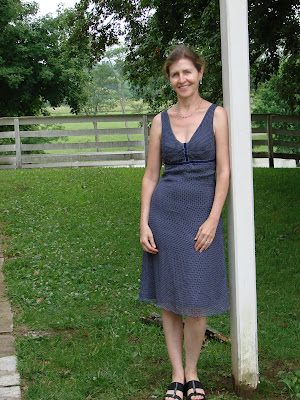 While we were at Pleasant Hill, we went to a nearby town for a drink before dinner. We sampled a couple of bourbons at the Old Owl Tavern before we decided where to go for dinner. We were, after all, in Kentucky. In my first round of grad school, in my early twenties, I was a scotch drinker. I liked single malts, neat. And then, somehow, I just lost my taste for them. It wasn't until I met my husband, who grew up drinking bourbons in Kentucky, that I re-developed a taste for whiskey. After our trip to Ireland, my true love is the mellower Irish whiskeys. 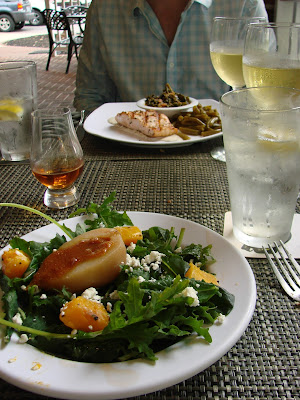 Turned out it was so pleasant out on the deck of the Old Owl Tavern that we stayed for dinner. 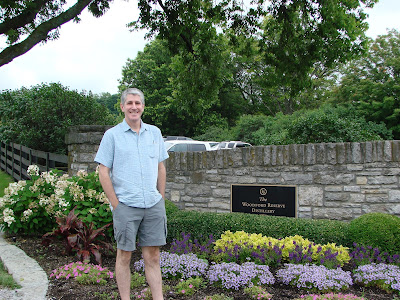 The next day, we headed up to Versailles to tour the Woodford Reserve Distillery. (Versailles is pronounced Ver-sales. Because Kentucky.) 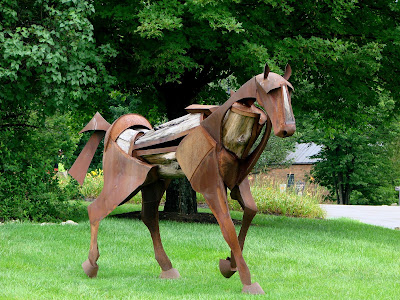 Woodford is the oldest distilling site in Kentucky, dating back to 1812. Distilleries were built near springs because spring water is used to make the whiskey. 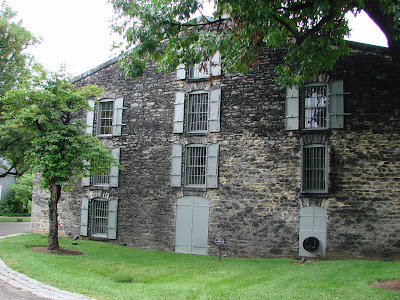 The tour involved getting on a shuttle bus and driving to the main distillery. 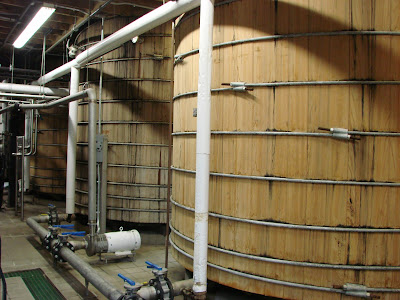 The grains are ground and cooked into mash before being added to the fermenting barrels. 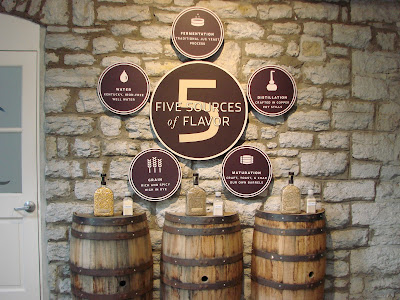 Of course, the tour included the standard listing of the requirements for whisky to be labeled bourbon: It has to be produced in the U.S., made from a grain mixture that is at least 51% corn (the rest is barley, wheat and/or rye), distilled to no more than 160 proof, entered into the barrel for aging at no more than 125 proof, bottled (like other whiskeys) at 80 proof or more. 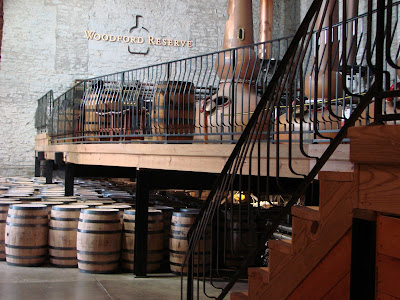 Bourbon is put into charred American white oak barrels for aging. The color and flavor of bourbon come from the caramelized sugars in the charred wood. Bourbons gain more color and flavor the longer they age in wood. 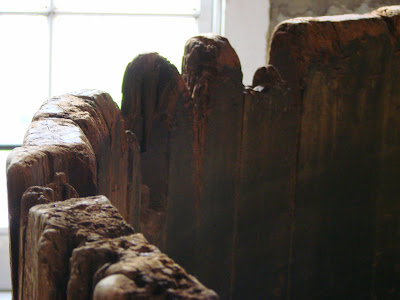 The mash and yeast are put into 100 year old cypress wood fermenters where they turn into distiller's beer. 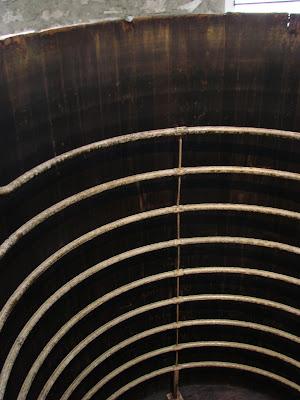 The fermenters have cooling coils to keep the fermenting liquid from getting too hot. Unfortunately since we were there on the 4th of July, the distillery wasn't in operation. 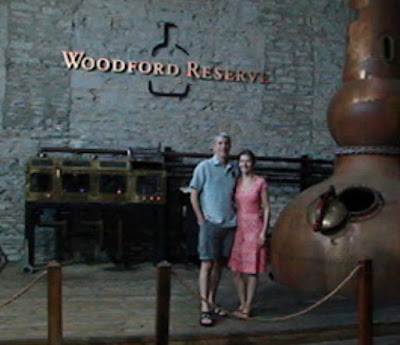 And then the tour guide offered to take a photo of us and changed the setting on my camera. Instead of taking a single, clear photo, it took photo bursts. I didn't discover the problem until after the tour. So here we are, blurry, near one of the copper pot stills. 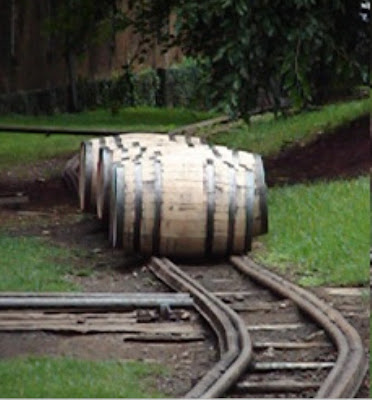 The Woodford distillery puts the bourbon into barrels and rolls them on this gravity track to the storage areas to age. Woodford doesn't age for a specified number of years - readiness is based solely on flavor. After the bourbon has aged and is bottled, the barrels are still saturated with anywhere from 2 to 10 gallons of bourbon. Since bourbon must be in new barrels and only used once, the barrels are generally sold to distilleries in Ireland, Scotland, Canada, Mexico, and the Caribbean for aging other spirits. Others are used to make different products, such as bourbon-barrel-aged beers and wines. 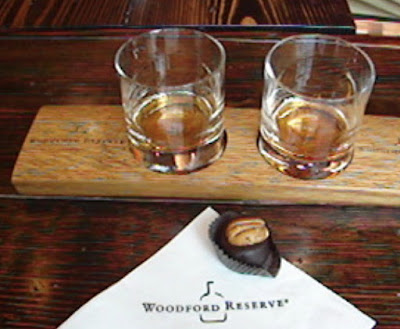 The best part of a distillery tour is the tasting at the end. We were each given a dark chocolate bourbon ball and small glasses of Woodford Reserve Straight Bourbon and Woodford Reserve Double-Oaked Bourbon. The latter is considered an "unbalanced" bourbon because it is aged longer and is sweeter. The guide described it as a dessert bourbon and mentioned that you don't even need to add anything to it. Add anything?! What sacrilege! Whiskeys should be drunk neat. Before we left, we bought a bottle of the Double-Oaked and also a box of the amazing bourbon balls. 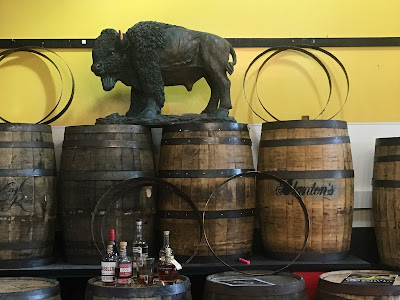 On our way home we stopped at the Liquor Barn. I referred to it so consistently as "Al's Liquor Barn" (à la Toy Story) that after a while, my husband starting saying Al's Liquor Barn, too. 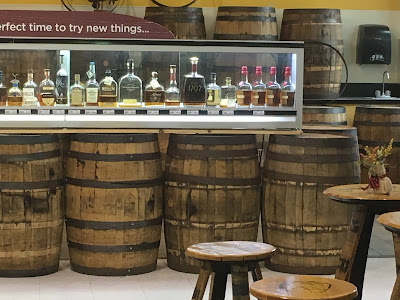 One cool thing in this store is a tasting bar where you can try samples for two or three bucks. 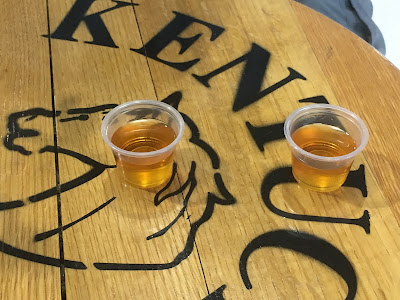 We tasted the Eagle Rare, a Buffalo Trace whiskey, and the Russell's. Both had been recommended, but neither stayed on the list after tasting them. 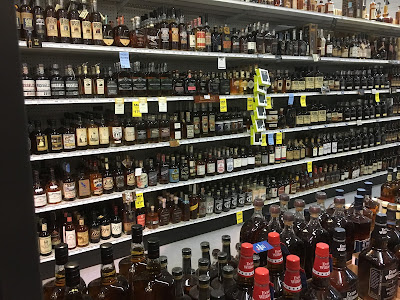 I'd done some research on-line about bourbons to try and we were in search of Willet Pot Still and W.L. Weller. We found the first but ended up trying a couple of smaller liquor stores before we found the Weller. It's a wheated bourbon and tastes like the love child of Bourbon and Irish Whiskey. I now call it Uisce Bourbon. 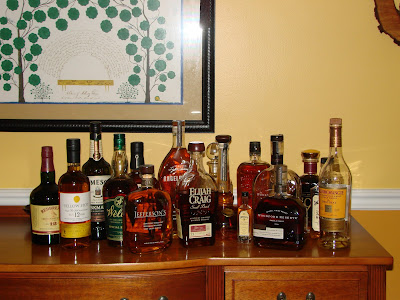 I bought some others (both bourbons and Irish whiskies) here at home and we now have quite a collection. The funny thing is, we drink them sparingly. We often just split a very small glass with a chocolate truffle before bed. It's become a tradition I really like.
Posted by Secret Agent Woman at 8:00 PM