How about a book review? 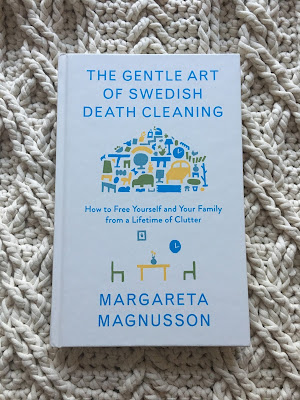 I love the gentle art of Swedish death cleaning. The idea of it, that is. Not so much the book, though. Thankfully, I won this book in a giveaway and didn't waste my own money on it. As a public service, I will save you the the cost of the book with a quick summary. I'd say that I'm also saving you time, but this book took literally 40 minutes to read - and that included my husband interrupting me to come to the study and proofread something for him!

The premise is that we are all going to die. The older you get, obviously, the sooner that will happen. And when you die, your stuff becomes your heirs' burden. Death cleaning, or döstädning, is about off-loading things that no one will want after you are gone to reduce that burden. So get rid of your crap.

That's it. That's what is of value in this book. The rest of it is random reminiscing about life in Sweden and an odd coyness about the author's age. Seriously, she says several times that she is "between 80 and 100." I found that irritating enough to google it - she's 83. Mystery revealed. I can't imagine saying I'm between 50 and 70. Then again, maybe I should start telling people I'm between 30 and 56.

Other tidbits from the book: She has a "stylish" leopard-print apron she wishes she could wear all the time. She repurposed a metal wok into a hat. She's remarkably snarky about her kids. Like this: "Still, I know families who live in a complete mess (I won't mention the names of my children here, but you know who you are.)" Well. Isn't that lovely. She also kept some of her kids' baby clothes to spur their own procreation. "And when grandchildren failed to arrive, I would take the box down and remind my lazy children of what I wanted. It worked. Now I have 8 grandchildren." Jesus.

Technology notes: She wishes she'd used tape to hold together papers instead of staples because you can't put staples through a shredder. Um, yeah you can. Also, a hook to hang your keys on doesn't actually "cost nothing" unless you steal it. And while she notes that encyclopedias are no longer necessary because of the wonders of the internet, she does hang on to reference books like a dictionary, a thesaurus, and an atlas. Because apparently she doesn't know those answers can also be found online.

In a section on accumulation she says, "We feel like last year's colonial style of dark wood and bamboo has to be exchanged for this year's clean white Nordic minimalism"... "This is wasteful but not a huge problem if we remember to get rid of last year's things before we buy the new ones." Well, I beg to differ, Ms. Magnusson, it is indeed a huge problem. That kind of mindless consumption is killing the planet.

Among the things she's held onto are ladles made from coconut shells (ah, NOW I know what my kitchen is missing!) and a "small tea strainer of plaited bamboo, far too brittle and beautiful for daily use." Okay, forget the whole idea of using what you have. She feels these things will be "easy to place with anyone," but she also tells a story of a beautiful bracelet her father gave her that she sold rather than risk a possible fight over it when she died. She really doesn't seem to like her kids much.

A side note - when I was googling her age, I watched a bit of an interview with the author. In it, she was dusting a packed bookshelf with loads of knick knacks in front of the books. So how much death cleaning is she really doing? Walk the walk, man, especially if you are selling a book about it.

And the book wraps up with "I will feel so content and happy when I have done most of this work.... And if I don't die, I will probably go shopping. Again!" What the actual fuck?  I do believe that for Margareta Magnusson, senility started to creep in somewhere between 80 and 100.
Posted by Secret Agent Woman at 6:54 PM