and on the road. 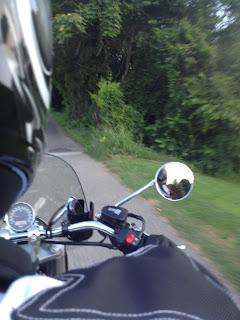 This weekend, in contrast, we had on probably too much clothing for the weather. Saturday after dinner we took a short run for an errand, which had us chancing upon a hot rod show. No interest on my part, but at least we kept moving up and down the rows and didn't have to actually stop and talk to anyone. We drove back to my house under gathering clouds of a storm that hit later in the evening. 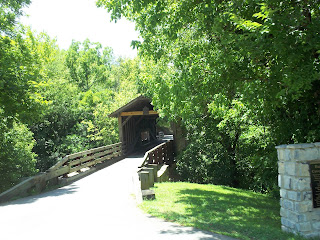 The next day, we took a more meandering route, over a neat old covered bridge. It was a warm day, but cooler once we got into the mountains. I have to say that even though I prefer back roads to highways, it still scares the bejeebers out of me. I look over his shoulder at the speedometer and say things to myself (in my usual demure way) like, "65! Fuck!" I especially hate the part where he leans into curves and I envision my broken body skittering across the pavement. Yeah, so I'm not a total convert. 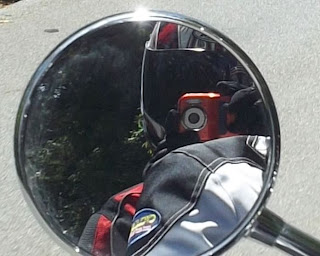 On our way in, we stopped at a gas station and while I was waiting outside by the bike, this old guy walked up to me and started speaking to me in what could only be another language. Something about gears and brakes being reversed and 650s and CCs and other incomprehensible things. And as I was nodding my head idiotically and saying, "Uh huh," I got the insane urge to pull my older son's trick of yelling all my answers like rapper Lil Jon, "YE-AH! WHAT?! O-KAAY!" 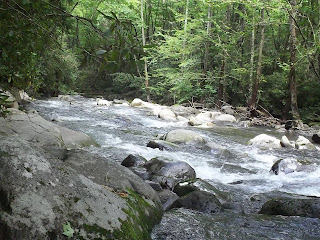 But once we hit the gravel road into the park, we slowed down and the ride became leisurely. In fact, after one stop, we decided to ditch the jackets until we got back to the paved rode. Under that heavy armored jacket, I was wearing a yoga top because of the heat. With my helmet on top of narrow bare arms and shoulders, my shadow reminded me of one of those bobblehead dolls. 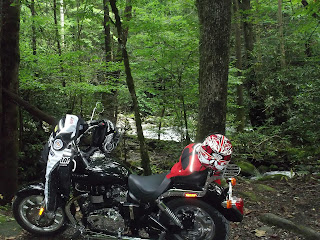 Midway around the loop, we parked and climbed down to the creek. See my helmet?  I added a peace sign on the back, so it looks a little more like me. When I showed my friend he laughed and shook his head. I think my pacifist ways baffle him as much as his more aggressive approach to the world baffles me. 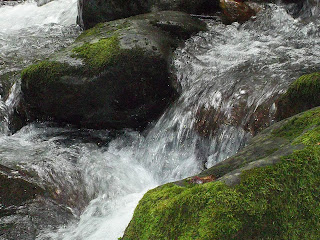 In these ancient mountains, it is like stepping back in time. Everything is soft and worn, cloaked in moss and blanketed in mist. 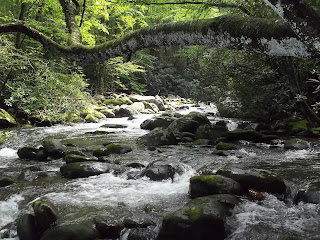 We stayed for a while, just talking and watching the creek roll by. Well, I sat still anyway.  Some of us are a little more distractible and had to get up and skip stones into the water. But we were hungry and left to find a place to eat. I spotted a restaurant and we pulled in and got a table overlooking the creek. 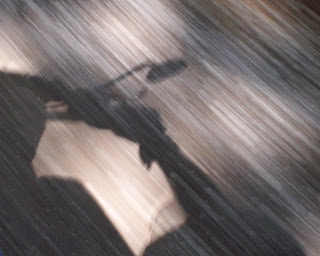 And then home again. People keep telling me I will want to learn to drive a motorcycle myself. Let me tell you clearly - no, I will not. Ever. They freak me out. I question my own sanity for even getting on the back of one.