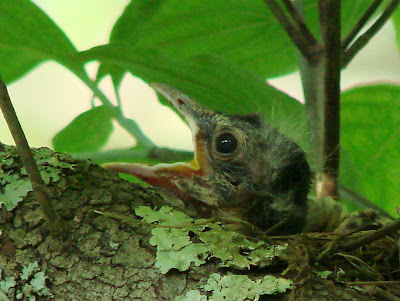 Just recently I noticed the robins in my dogwood had babies in the nest. 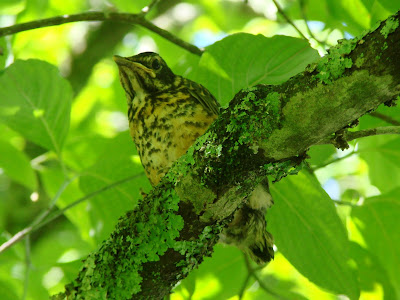 Well, just a couple days later and my baby robins have become fledglings. I took this picture while one of the parents chirped at me nervously from nearby. 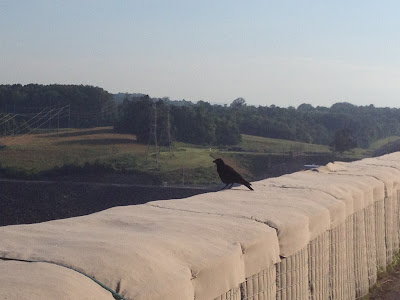 One the things I liked best about walking at the dam is the variety of birds, from the blackbirds that perch on the sand bags, the Great Blue Herons that wade in the shallows, and the songbirds who serenade me. One day last week, I encountered a flock of sparrows on the dam. They flew up over the side of the dam and circled me as I walked, then flew back off over the other side.  My walking haiku(ish):

The swallows appear
To swoop and dive around me
As I walk. Magic.
Another day I heard what sounded like knocking wooden pegs with a mallet. I thought someone might be setting up a tent, but the noise went on and on. 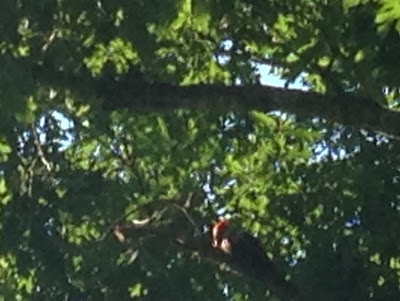 This is a lousy phone photo, but the noise was this guy, a big pileated woodpecker. He appeared to be doing his level best to sever this limb from the tree. 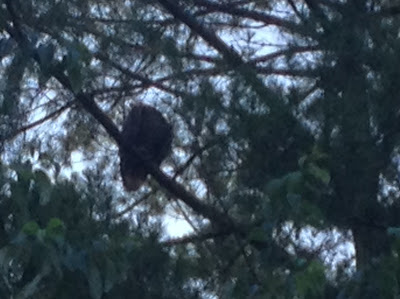 I wish my phone took better distance photos, but you'll just have to take my word for this one. While walking one morning a week ago, a bald eagle flew in front of me, pursued by two mockingbirds, and then around the lake out of sight. I didn't realized he'd wheeled around in an effort to escape his tormentors. Suddenly he swooped in so low over my head that I noticed the shadow and the air from his wings before I registered what it was, and I ducked. I watched while he flew into the woods, then I ran down the road to follow him until I was standing in front of the tree where he'd landed. He spread his wings out for a moment while staring me down. I said out loud, "I get it, you're a big, scary raptor." Apparently realizing that hadn't worked, he made a big show of turning on the branch so that his back was to me. After a bit, he twisted his head around to look at me over his shoulder. I said, "Yeah, I'm still here." I swear he heaved a big sigh before he flew off over the field. Poor thing was probably thinking he couldn't get a moment's peace. I've had days like that.

There is just so much to be amazed at in this world.
Posted by Secret Agent Woman at 3:35 PM