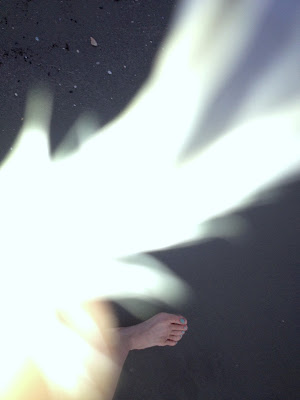 I very nearly walked out before the entrées even got to the table. It was that bad. It started with him commenting about having to talk a lot for his work. I sympathized, saying that I do as well. He set my teeth on edge, right off the bat, by saying all I had to do was listen and asking why I had to go to school just to be able to say "How does that make you feel?" That's right, six years of grad school reduced to a stock comic phrase. I just responded mildly that it wasn't something I actually ever said and he said, "Sure you do. That's what it shows in movies." I let that go and asked where he was from originally. He told me Ann Arbor, and then added, "Well, really Detroit, but no one says they're from Detroit anymore." I told him my ex-husband was from Detroit and he said, "Well, I just say I'm from Ann Arbor." Sure, why not? I'm originally from Connecticut, but I just tell people I was born in Fiji.

We moved on to a discussion, after ordering, about his view of the sorry state of kids these days. His contention was that kids today don't really learn anything because they have computers (and the guy is a computer programmer, although he does not have a college degree) and how we used to memorize phone numbers but now cell phones and computers do all the work. I disagreed, stating that not memorizing phone numbers is counterbalanced by the expanding nature of knowledge and... but he interrupted me saying, "What is learning? It's retaining information, right?" I said, "Well, no, actually, .." and again he interrupted, "No! What is learning? It's retaining information! Right? Right?" I pointed out that with a doctoral degree and having taught college courses, I knew something about learning and that it included being able to use novel data and think creatively and logically, and... But he interrupted again, voice raised, and proceeded to lecture me on what constitutes learning. I finally said, "Just because you're saying it loudly and repeatedly, doesn't mean you're right." He said, "I AM right, you're just not listening!" I shut down at that point and stared at him, expressionless, while he held forth for another few minutes. When he stopped, I said calmly, "I think we're going to have to agree to disagree on this one." He said, "What?!" And I said, "We're. Going. To. Have. To. Agree. To. Disagree. " As if talking to an idiot. Because, well, - draw your own conclusions.

He looked dumbfounded and then,
Him: "Then what else should we talk about?"
Me: "Well..."
Him: (interrupting) "What are your views on politics?"
Me: "Probably different from yours!"
Him:"I don't really care about politics."
Me: "Did you just pick it because it seemed safer than religion or abortion?"
Him: "I don't care about those either."

The waitress was setting the food down on the table so I took a deep breath and decided to just be friendly and get through the meal. I asked about his only child, who he told me was "25 or 26." I couldn't help but express surprise that he wasn't sure which. He thought for a minute and said, "25. But she lives in Michigan." He talked about a phone conversation with her and I asked if he got to see her often. No, it had been three years. I asked why and he told me he doesn't want to go to Michigan and he doesn't want to pay for her to fly here. In spite of the fact that earlier he'd been talking about how much money he made and his houses and boats and cars. He bemoaned the fact that she "is an artist" and doesn't have the drive to make money. I asked, "Well, does she love it?" He answered, "Yes, but you can't make any money doing art! I don't think she even cares about being able to buy things!" I simply remarked that not everyone had that as a goal in life and that maybe it's important to do what you love.

This circled back to the "kids these days" theme. Honestly, you'd think he was 88 instead of 48. I had to hear about his paper route at 11 and how hard he worked at his factory job right out of high school. I listened politely. Until he talked about the good old days of playing kick the can. Again, I could not bite my tongue. "Kick the can! Are you sure you weren't raised in the 50's?" He maintained that people played kick the can "everywhere" in the '60's and '70's. I said I hadn't found that to be true in my neighborhoods during those decades in Massachusetts, California, Mississippi or Georgia. He said he was sure it was true in 90% of the country.

I won't go into every instance of bragging, unsupported statements of questionable facts, and talking right over me. Except to say that he was very pushy about his idea that I should rent out my house rather than sell it, disregarding my many protests that the idea held no appeal for me. A final irritant was that after I would answer a question he would say, "And how does that make you feel?" and laugh heartily. Oh ha ha ha psychologist joke. I get it. After maybe the 7th time, I found myself idly wondering how he'd react if I responded, "It makes me feel like you're being a dick."

I wasn't quite halfway through my my meal when the waitress came around again. He was nearly finished, in spite of having done most of the talking. She asked if we wanted to look at a dessert menu. "Oh," I said, "I'm not even close." She told us to take our time and started to leave, but he said, "I'd like a dessert to go."   -_-    I asked for a box for the remainder of my dinner.

When we walked out to our cars, he took a few minutes to quiz me about why I hadn't submitted a claim to my insurance for a small dent and then I thanked him for dinner. Neither of us bothered to say it was nice to meet the other. There was, of course, no talk of ever communicating again, let alone a second date. With other dates that went nowhere, there were at least some good qualities. But here, I got nothin'. He was a blowhard and a bully. So pile on if you want to, I won't argue with you.