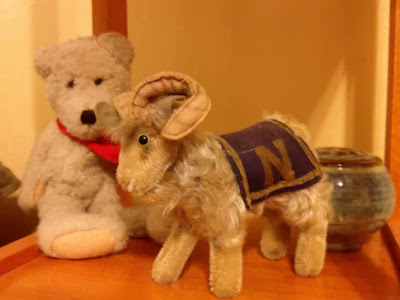 Yesterday, I sent my mother an email asking for the exact time of my birth, and her response was a reminiscence about my birth in New London, Connecticut.  Since it was a Naval Hospital, young corpsmen served as the nursing staff.  I was my parents' third child, and her mother (who we grandchildren all called "Gangeen") had come up to help.  I've heard my birth story many times over the years, and now tell my own kids the story of their birthdays.  When my older son was a little boy he used to listen raptly, then when I'd finished, say, "Tell me again!"

My mother's email about my birthday:

Here's what I remember about the day you were born. We were living in Ledyard in a rental house, waiting for base housing. I was 23. Gangeen had come to help me after you were born. Unfortunately, the doctor, when I asked, told me that she would need to be there by the 13th (funny how I remember that so clearly) even though my due date was the 26th. He thought you would be early. His name was Harry Pine, and he wrote on my folder to call him when I went into labor, though there were several obstetricians on staff at the Naval Hospital. Looking back, I don't know why. He also delivered [your brother], same deal: "Call him." So Gangeen came up on the bus from Chattanooga, and we waited. And waited. She watched me all the time for signs of impending labor. She passed her time toilet-training [your sister]. The morning of the 29th, [your father] had the duty, and went in to work, taking the Karmann Ghia. And I started having contractions. Around noonish, I think, we called Tina, the next-door neighbor, who was also my landlord, and she brought her car into our driveway. Gangeen ran out, carrying my suitcase, which had been packed, literally, for weeks, and clutching [your sister] by the hand. They all piled in the car, and Tina started backing out. I yelled, "Wait for me!" You were the prettiest newborn I've ever seen. All the corpsmen thought so, too. They misunderstood your name, and made a little sign for your bassinet in the nursery that said, "Candy." None of the other bassinets had labels. And from somewhere they found a little ribbon (red) for your hair. When they brought you to me to go home--two young men--they told me they didn't want to let you go.
Posted by Secret Agent Woman at 11:11 AM