There are limits to my hospitality. 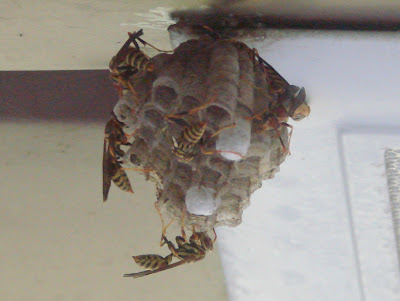 It's been a bad summer here for bugs.  Or rather, a good summer for bugs and a bad summer for those of us who aren't fond of them.  One morning I stepped out through the front door and found these wasps building a next right above my head.  No.  I'm sorry, but No. In general, I take a live and let live approach to bugs, but not when they place themselves where I am sure to get hurt.  I took the picture through the storm door and then told them, "Enjoy your day, guys. Because tonight while you're sleeping, I'm going to kill you all." 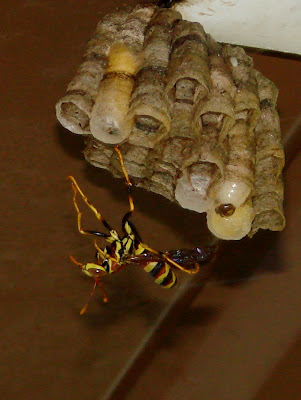 Just before dawn, I covered them in wasp spray.  I don't know why this one stayed attached, but he and his comrades were throughly dead. 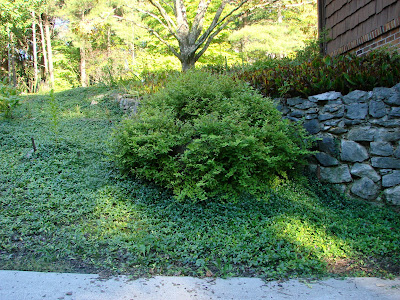 And then one day I went out to work in the bed by the garage.  Kneeling in the periwinkle to weed, I suddenly noticed movement around the spirea bush a couple of feet from my face. 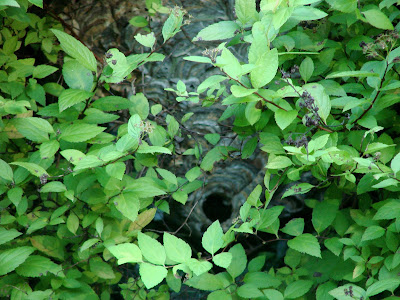 Well, holy hell.  A cleverly camouflaged hornet's nest.  Beach-ball sized and buzzing with many, many bald-faced hornets.  I called an exterminator to give me an estimate for removing it, because I had no interest in the helpful "use a flame-thrower" ideas people were giving me. We had the discussion about removing the nest standing right by it, which meant both of us had to keep ducking as hornets zoomed by our heads. He said the nest was a good three months old and and wondered how I'd missed it. All I can say is that I like the bumble bees and honey bees who hover around me when I garden, so a little extra buzzing just escaped my attention.  Besides, you can hardly see the damned thing.  I brought my neighbor over and he leaned in to look and then took a quick step back and said, "Whoa!" 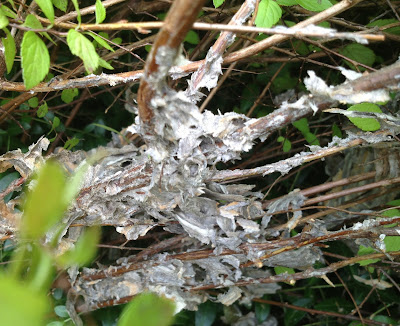 The after.  I was so impressed that they were able to take care of it without destroying my spirea.  I don't know what sort of protective gear the guy wore, but before I called the exterminator, I looked up directions for DIY hornet nest removal. They strongly recommend protective clothing, including a bee keeper's helmet. Of course, a bee keeper's helmet! Part of any standard wardrobe. And so versatile, too! I mean, sure there's bee keeping and hornet nest removal, but also useful for hiking, sea kayaking, motorcycle rides, casual Fridays and evening wear. Who WOULDN'T have a bee keeper's helmet in their closet? 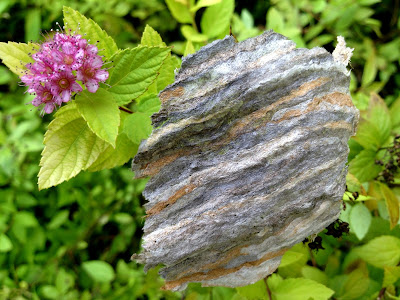 Scraps of the nest now litter the shrubs like confetti, and look to me like small renderings of the Painted Desert in Arizona.  Hornets are aggressive and will sting repeatedly when threatened so I could not leave them in my garden.  But I have to admire the artistry of their papery home.
Posted by Secret Agent Woman at 6:37 PM