Okay, so I said I'd blog about this trip. But I'm going to have to break it into sections. 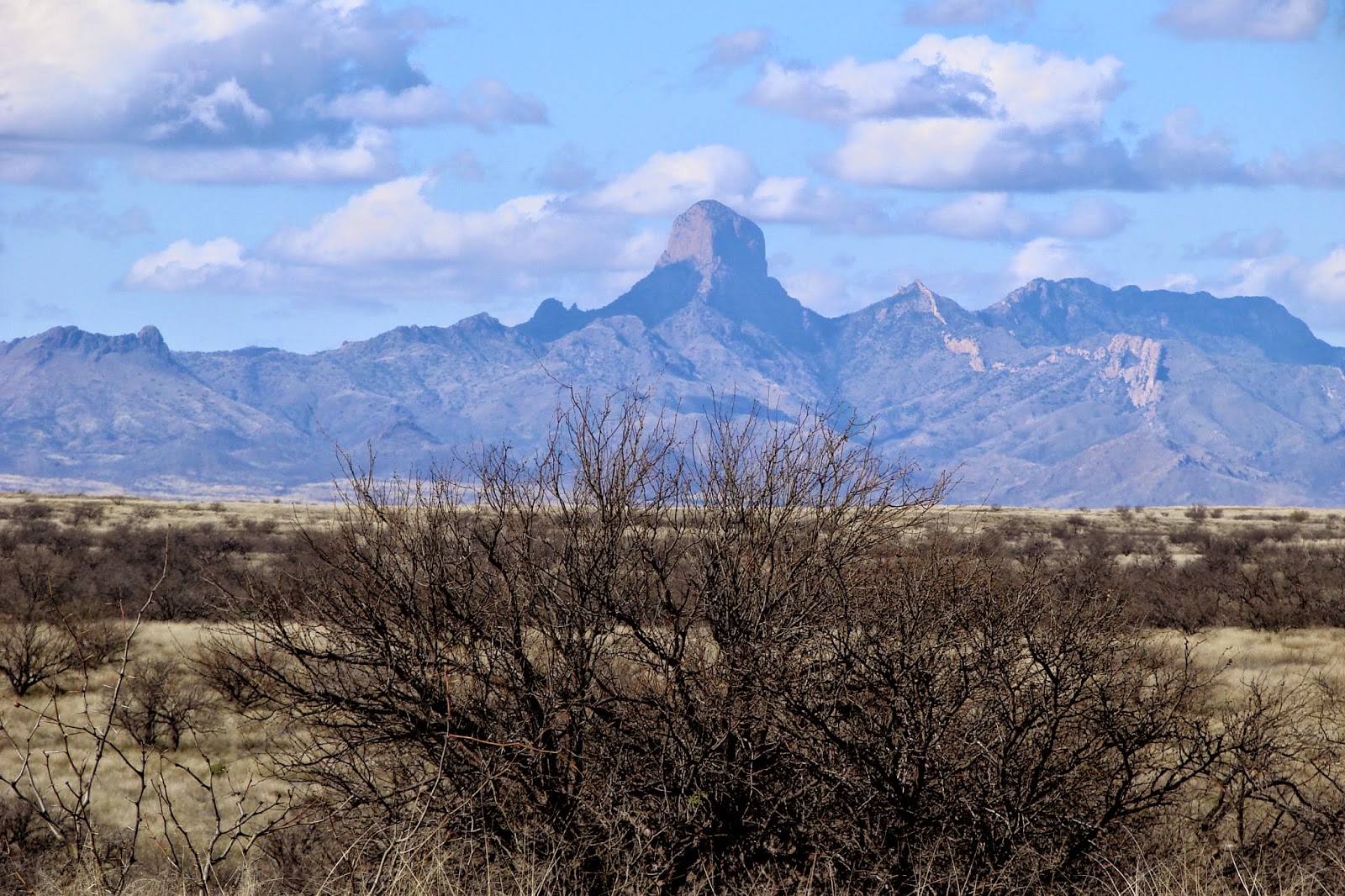 Honestly, as I rode southward with some of the others who'd flown into Tucson, I looked at the desolate landscape and thought, "What have I done?" It probably didn't help that I was used to the lush green of my home. And it for sure didn't help that I was looking ahead at a long week more than 1500 miles away from my boyfriend. But all that I knew as I drove by the Baboquivari Mountains, it all seemed dead. But I was here to volunteer at this refuge, 117,500 protected acres stretching down to the border of Mexico. So I listened to the warning about gila monsters, javelinas, tarantulas, rattle snakes, drug smugglers and plants with spines that would have to be removed with pliers... and signed the papers to make me a Fish and Wildlife Services volunteer anyway. 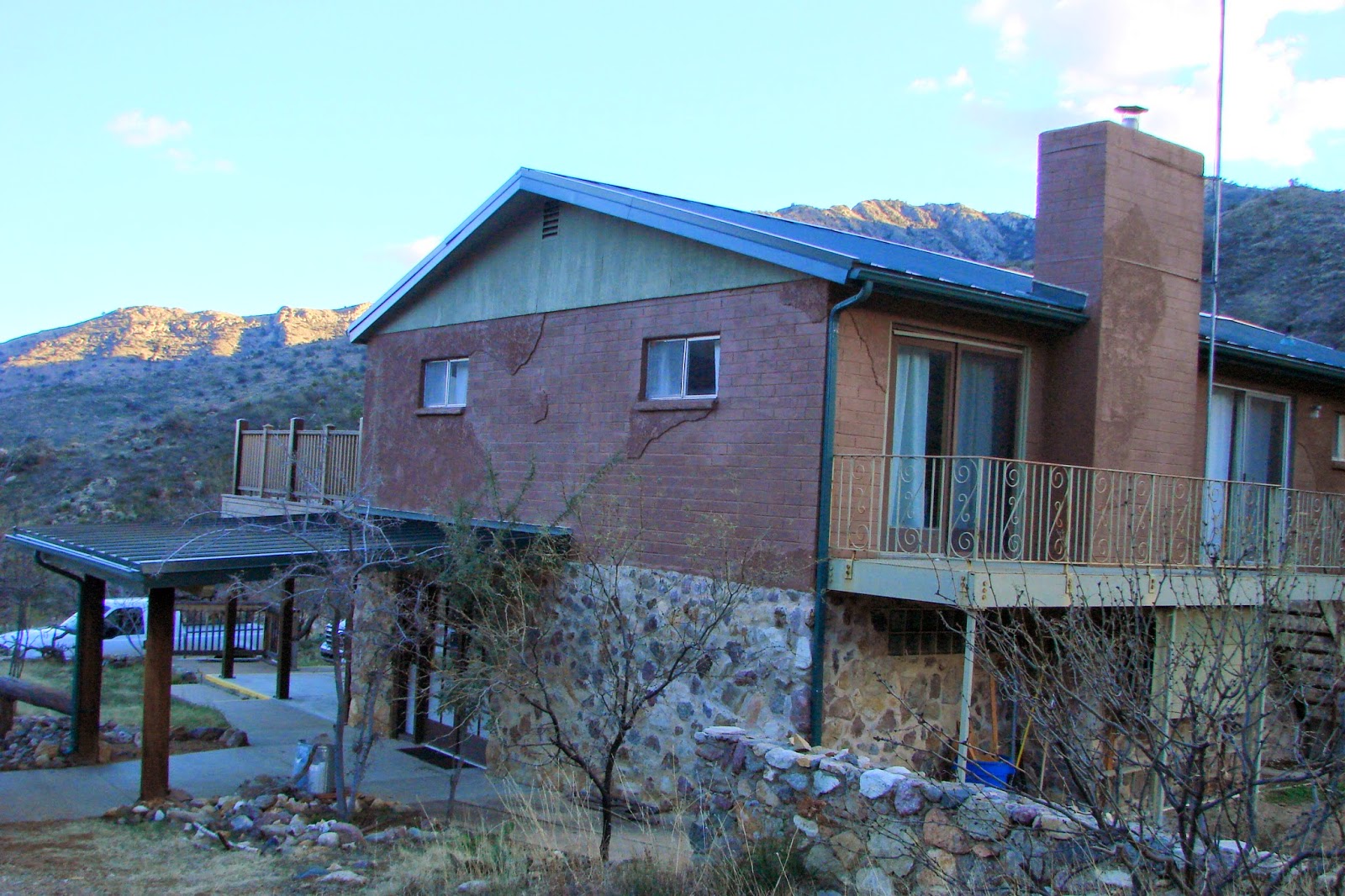 And then we made the hour-long drive up into Brown's Canyon to our lodge. I'd texted my boyfriend earlier that we could talk on the phone before bed. Partway up the mountain, there was a beep from the cell phone of the local volunteer driving some of us to the lodge. He said, "Oh, there's my phone letting me know we're now out of cell range." I looked absently out the window for a minute and then - "Wait, what?!" That's right - not just no wifi, but no cell service at all at the lodge. 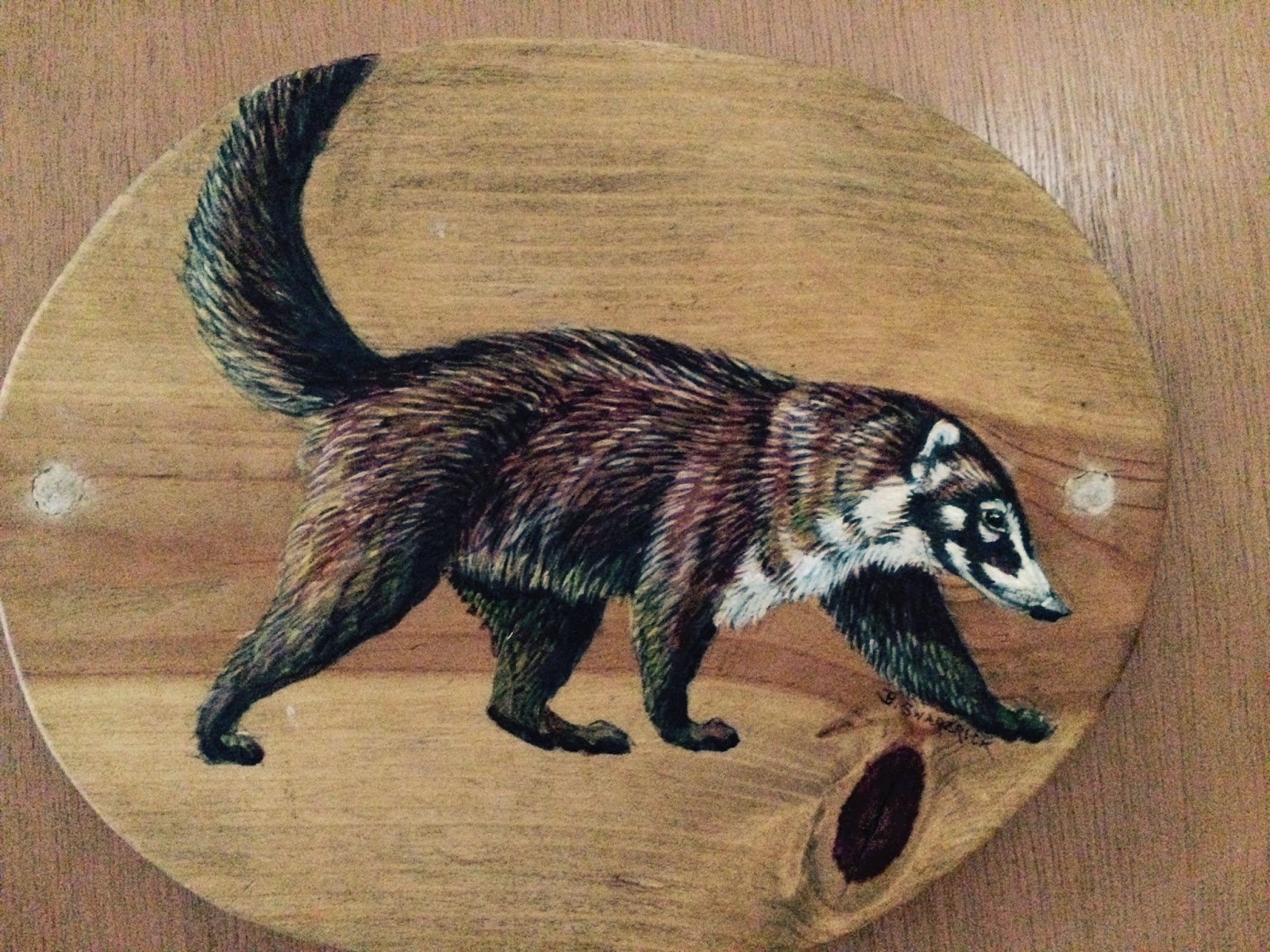 When I got there, the leader consulted her list and said, "You're in the coati room." I walked upstairs muttering, "What the hell's a coati?" Turns out it's a raccoon-like thing. 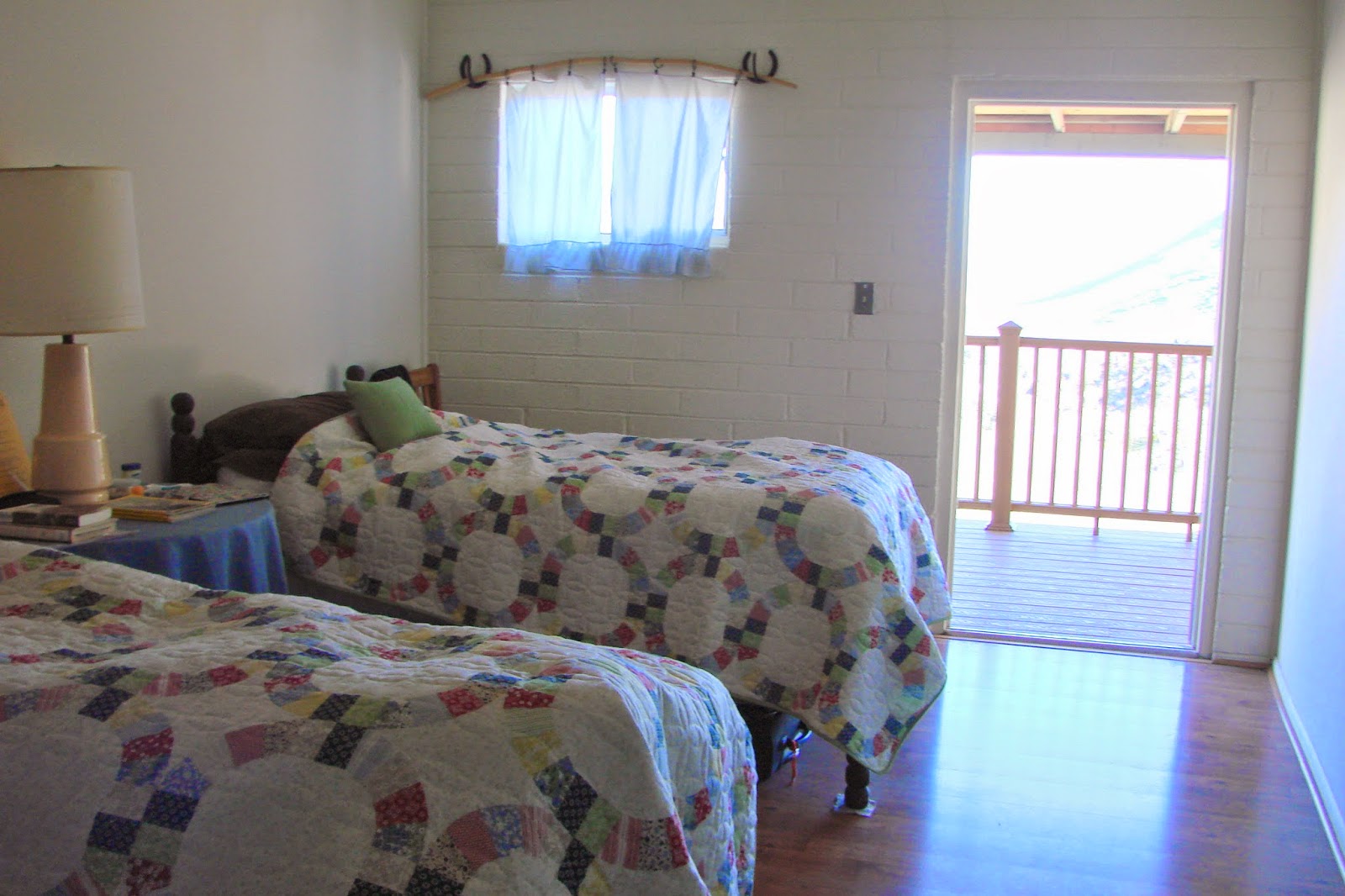 My roommate was a 74-year-old woman from Vancouver. I discovered she was a freaking work horse in addition to being very nice. In fact, it was an older crowd in general, many of whom were retired. The oldest was 81 and there were six in their 70's. Four of us in our early 50's anchoring down the other end, and the rest in their mid-60's. 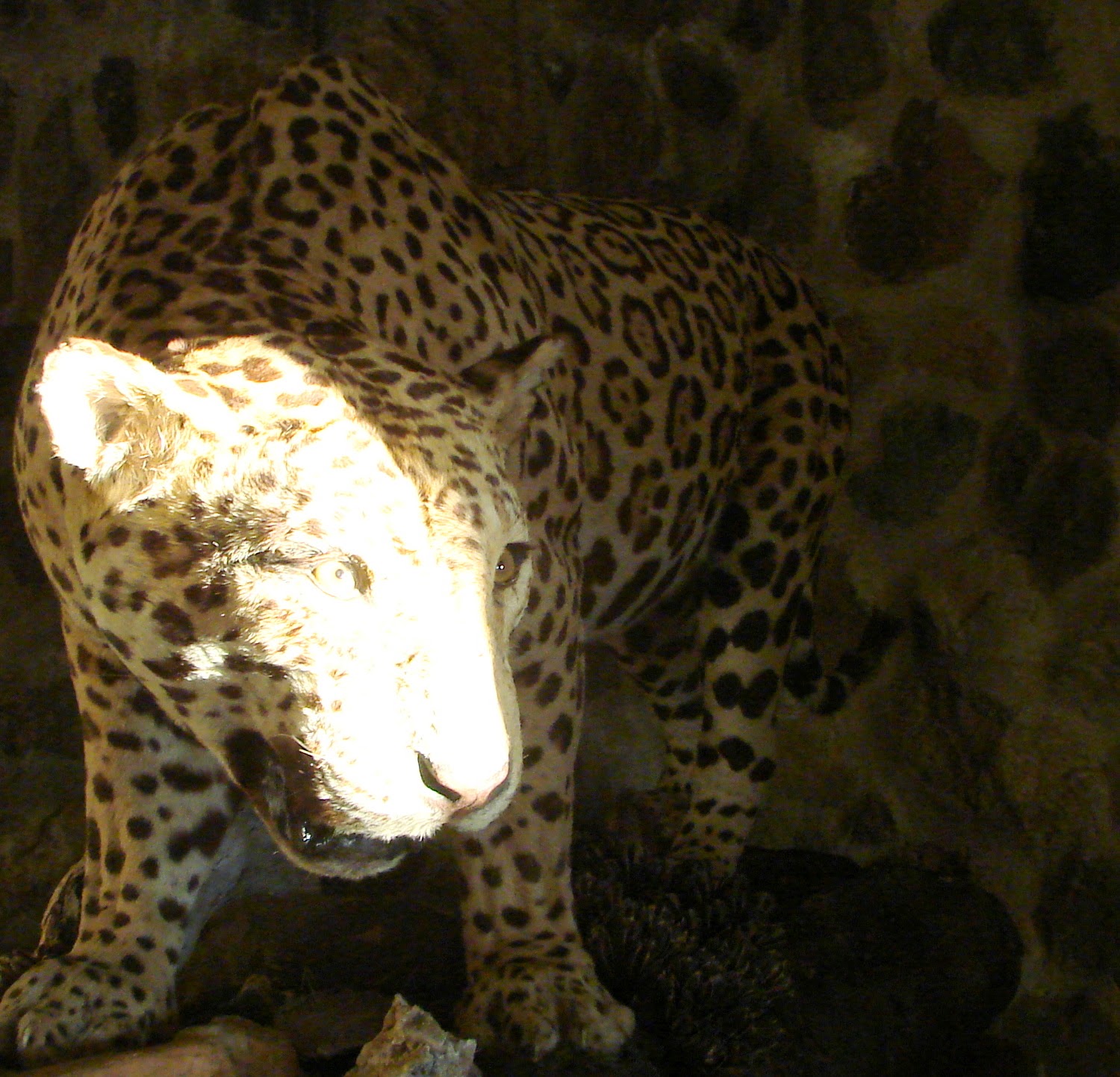 For some reason, there was a stuffed jaguar downstairs. I actually sat with this thing just over my shoulder for about 20 minutes without even noticing it. Probably doesn't bode well for my chances of surviving in the wild. 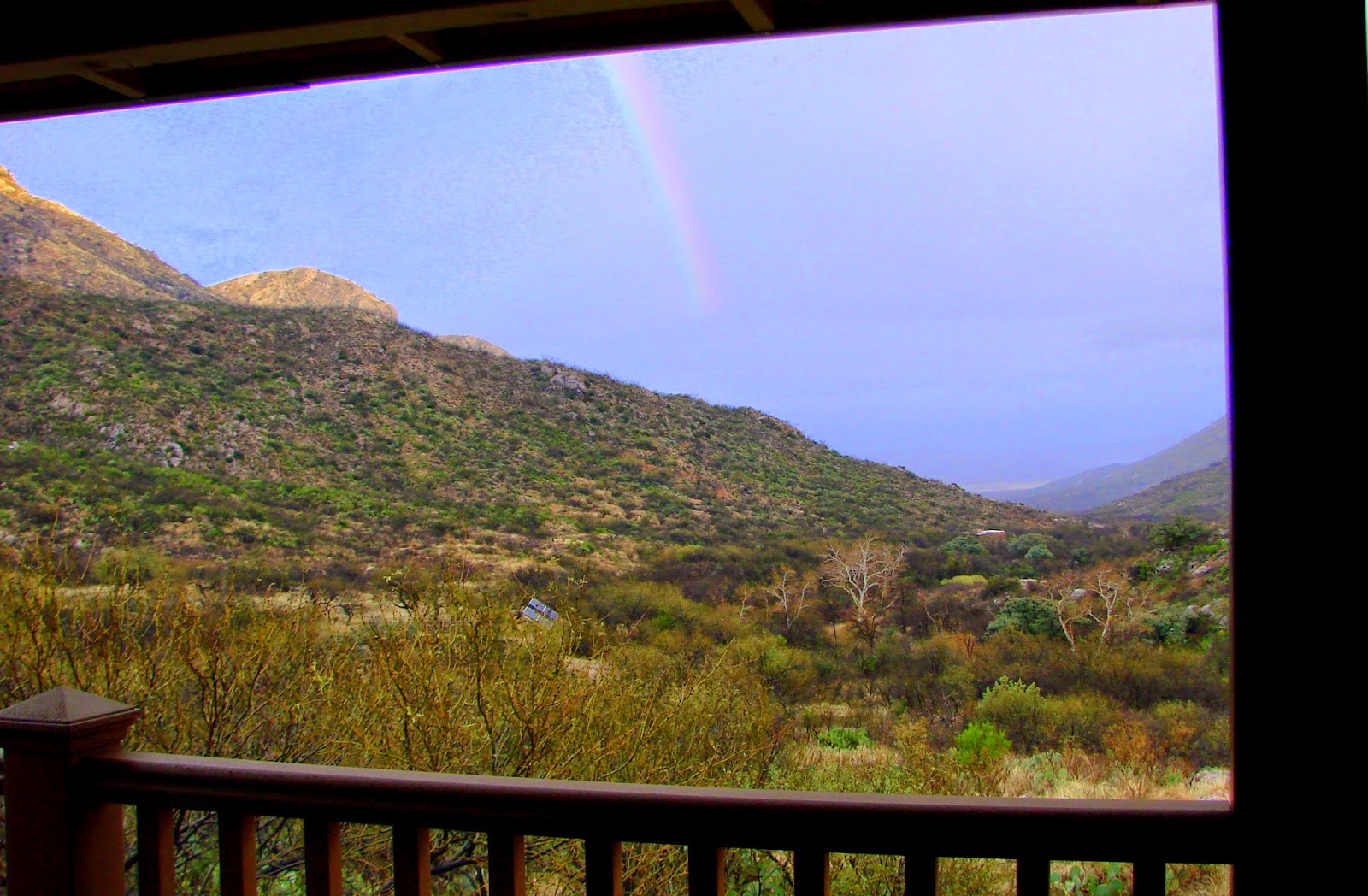 But the place was starting to look a little more beautiful. 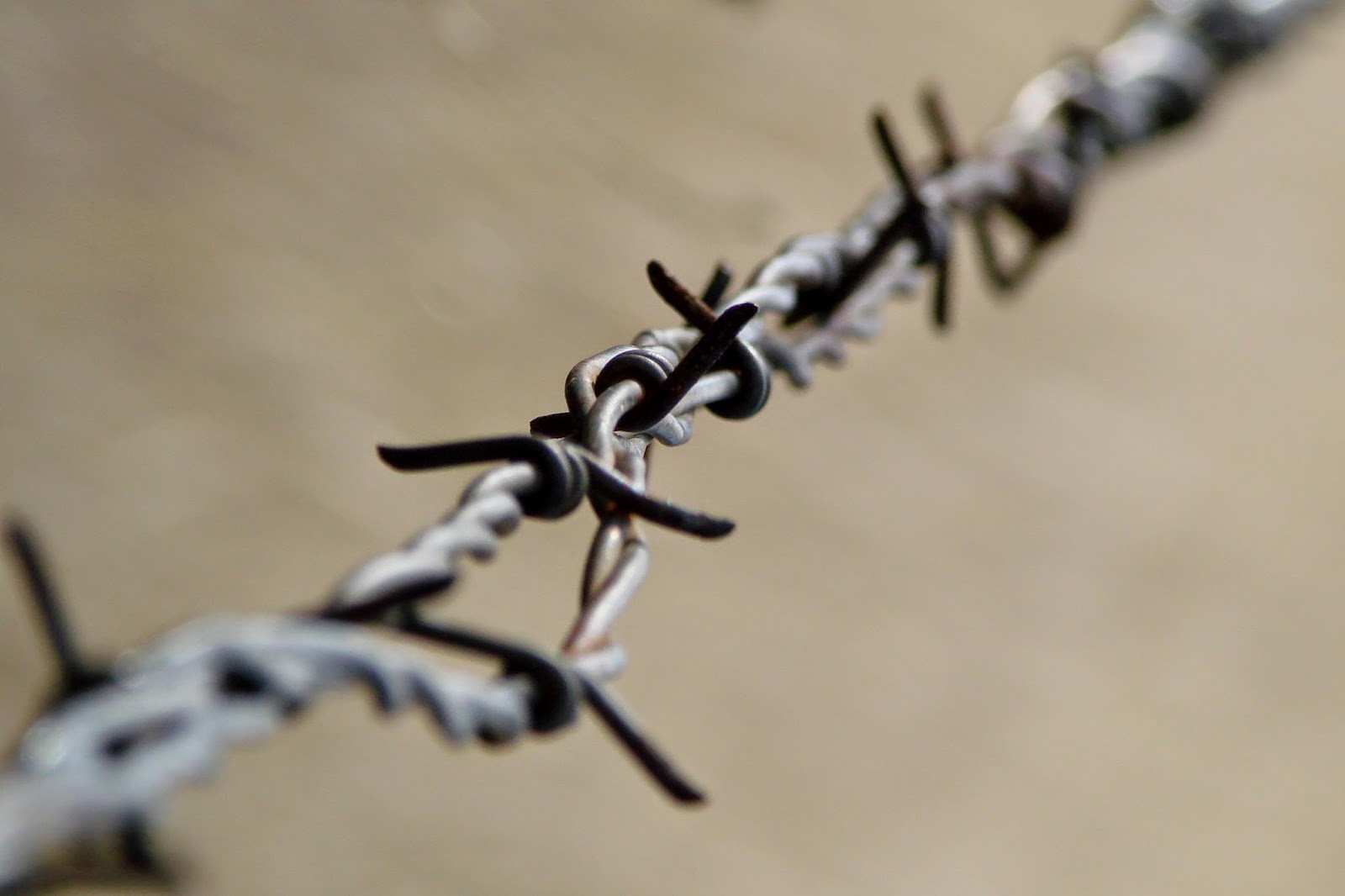 The next morning we started on our first day of work. We were here for this barbed wire. Miles of it, impeding the roaming of the pronghorn antelopes, who apparently spend much of their time singing, "Don't fence me in." 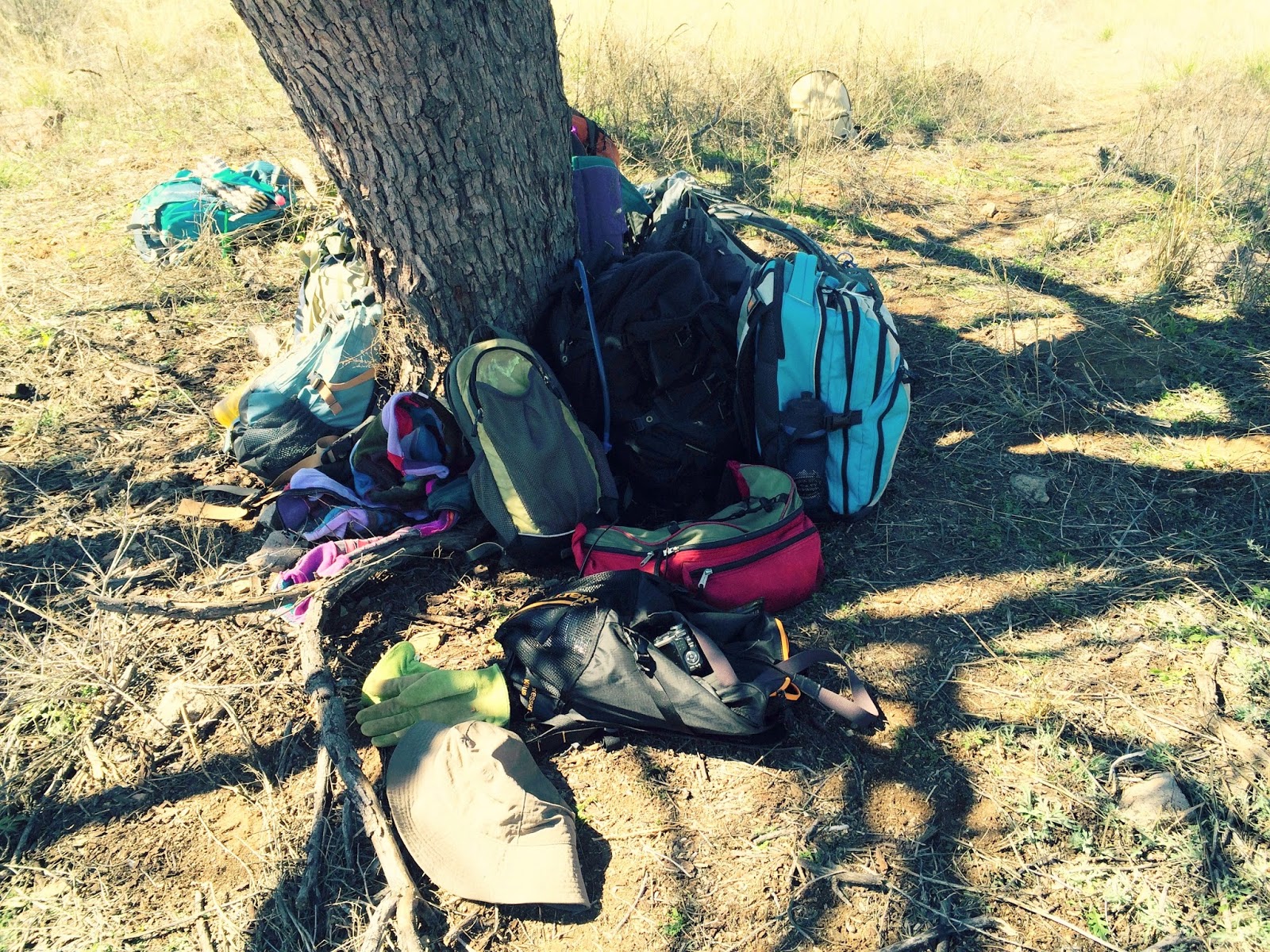 We hiked into the refuge and dropped our packs under a tree so we could carry the wire clippers and shovels further out into the field. I was glad for the shade when it was time for us to eat our lunches. 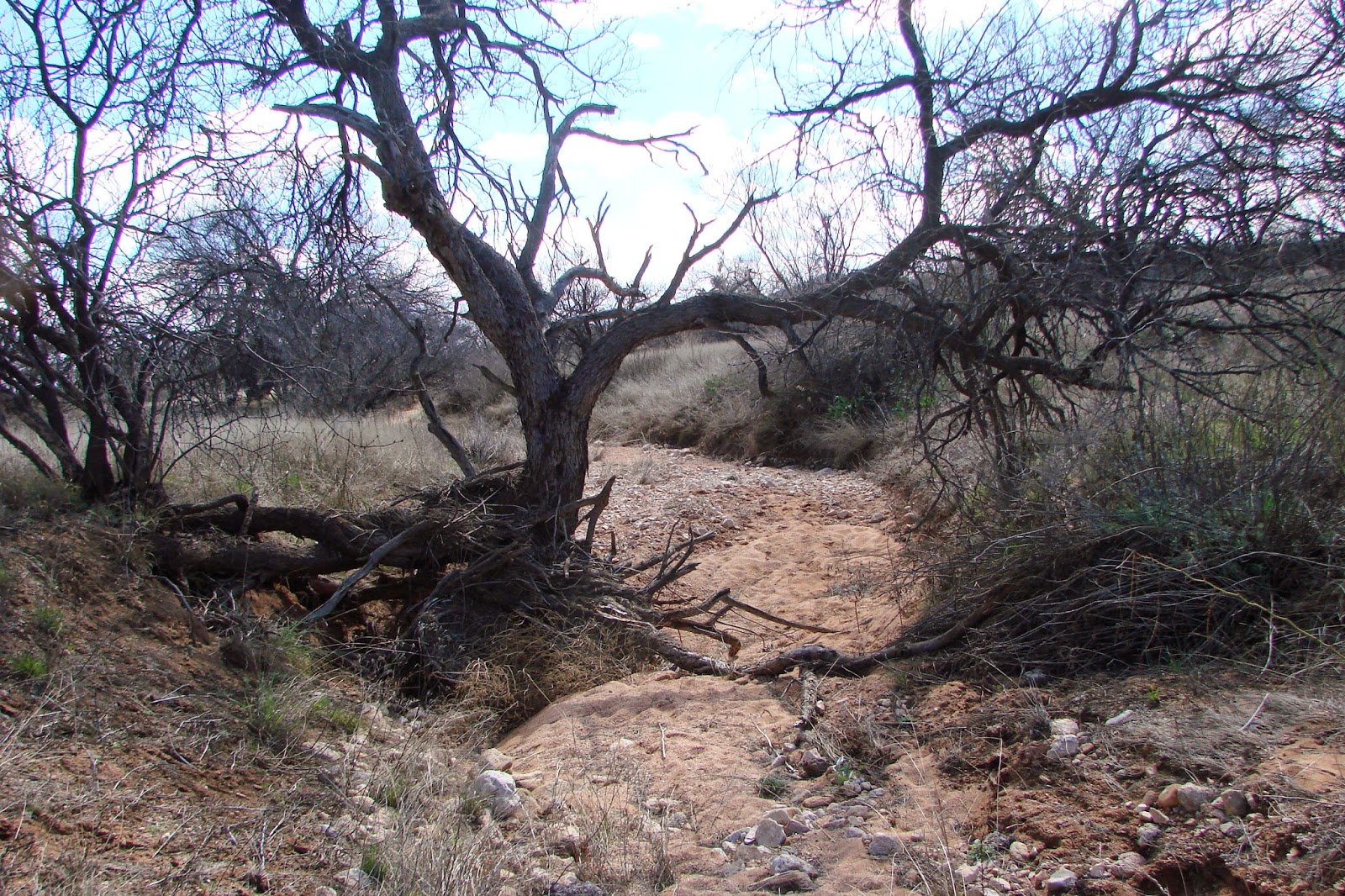 We spent two days cutting down barbed wire and uprooting the metal posts and hauling them back over rough terrain. 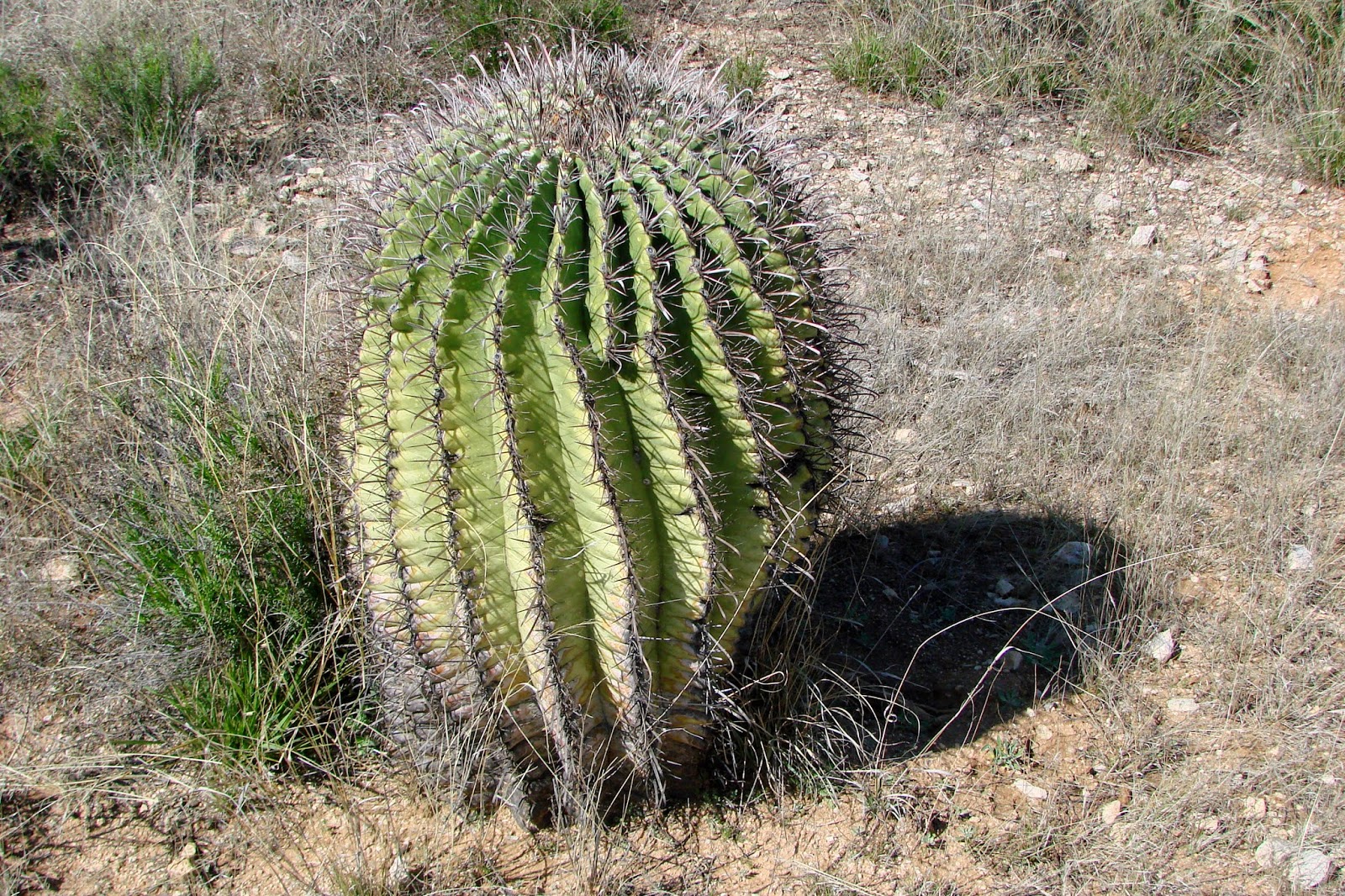 Up and down hills, under the scrubby branches of the mesquite and past the treacherous cacti that were everywhere. 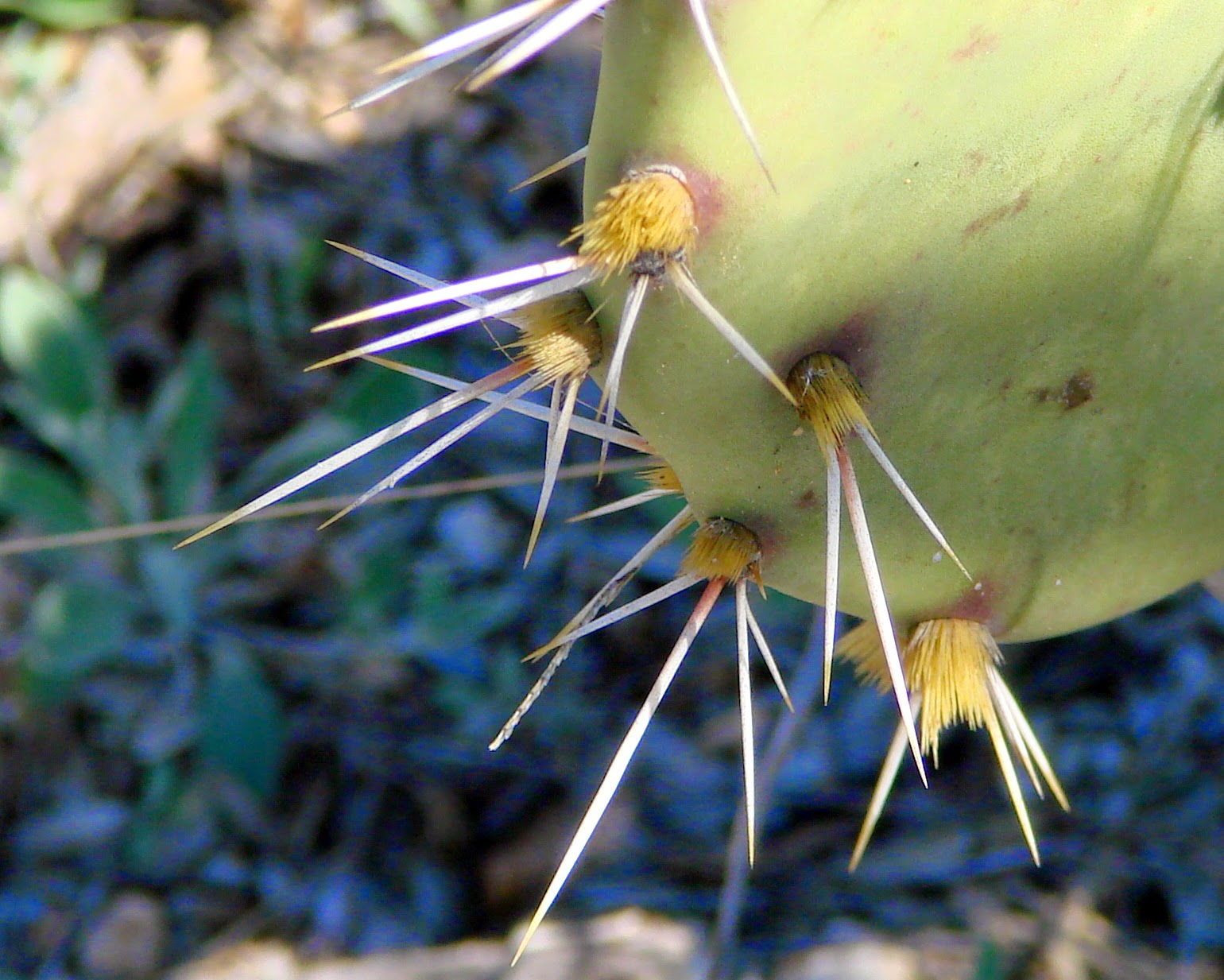 And when I say treacherous, I mean those things had evil on their little succulent minds. 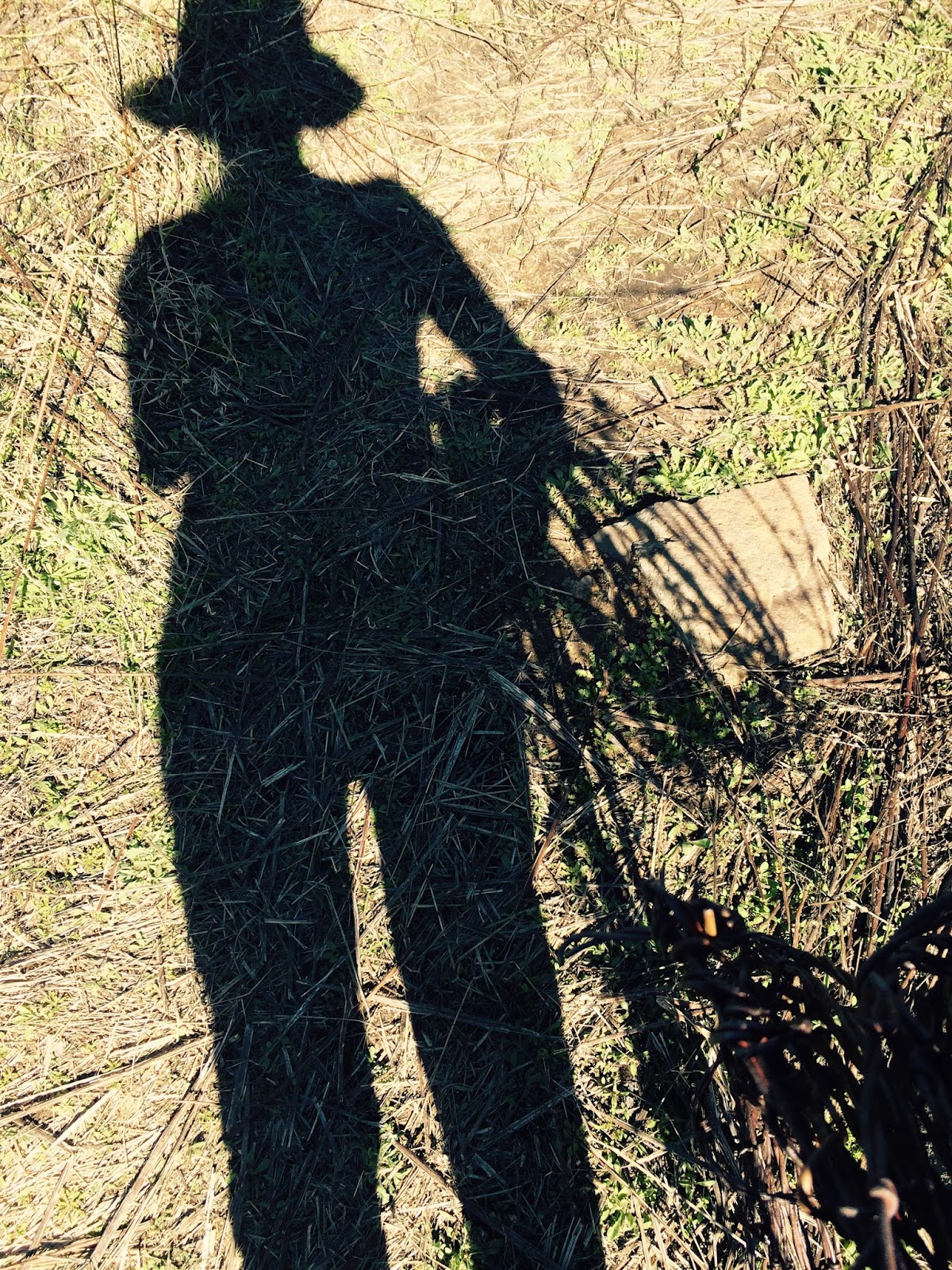 All of us ended with scratches and little puncture wounds from the rusting wire. I did a quick count backward and realized with some relief that I was still under the ten-year mark for my last tetanus shot. On the walk over the higher areas I was able to get a signal, so I shifted the rolls of wire to one arm and made a call. Later one of the other woman said they'd passed me and asked each other, "Is she talking on the phone?" Well, yes, yes I was. It was urgent. I was pining. 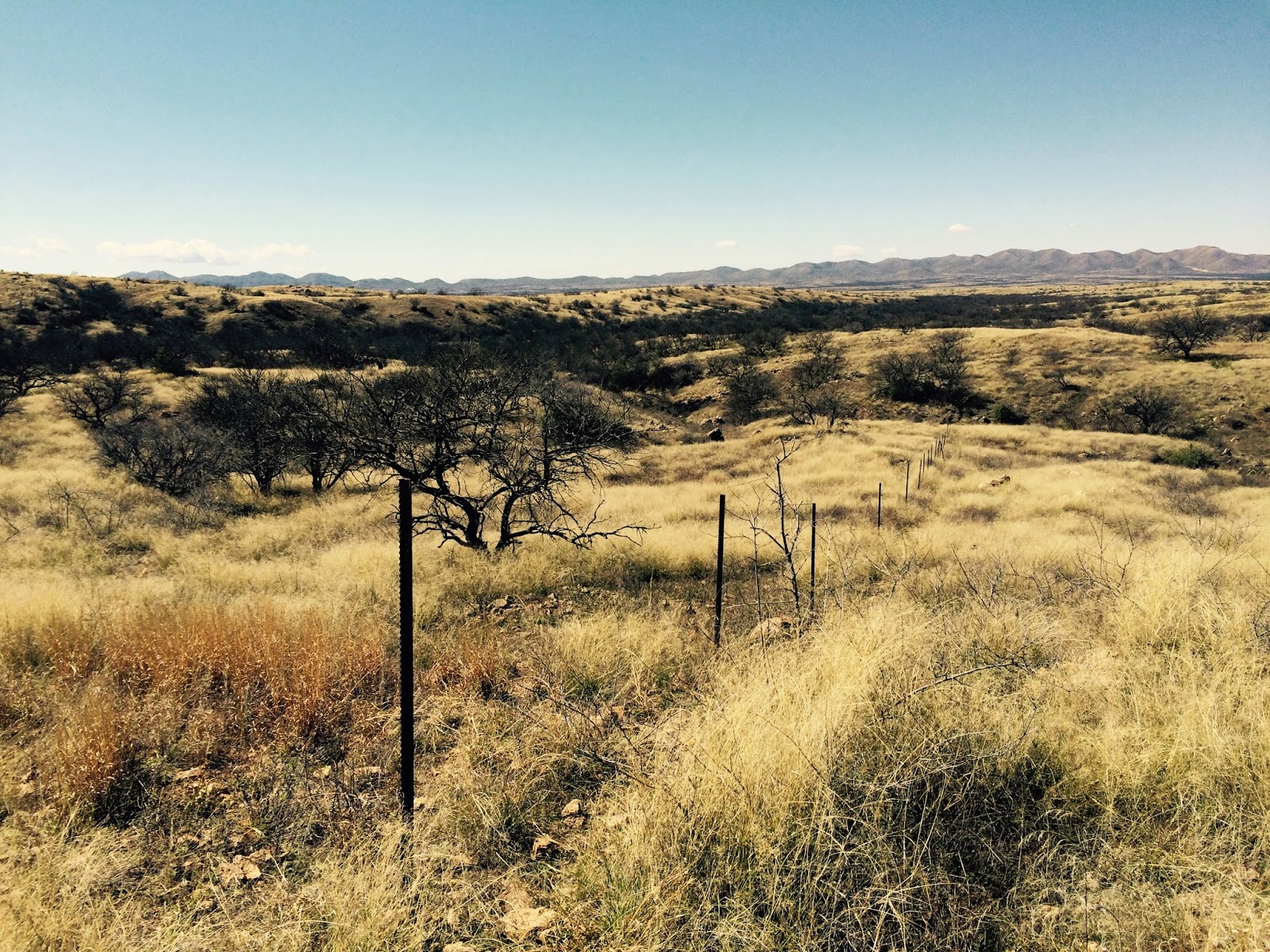 Browns and tans as far as the eye could see. While my home was being blanketed with snow, we were working in the sun, in 70-80 degree weather. 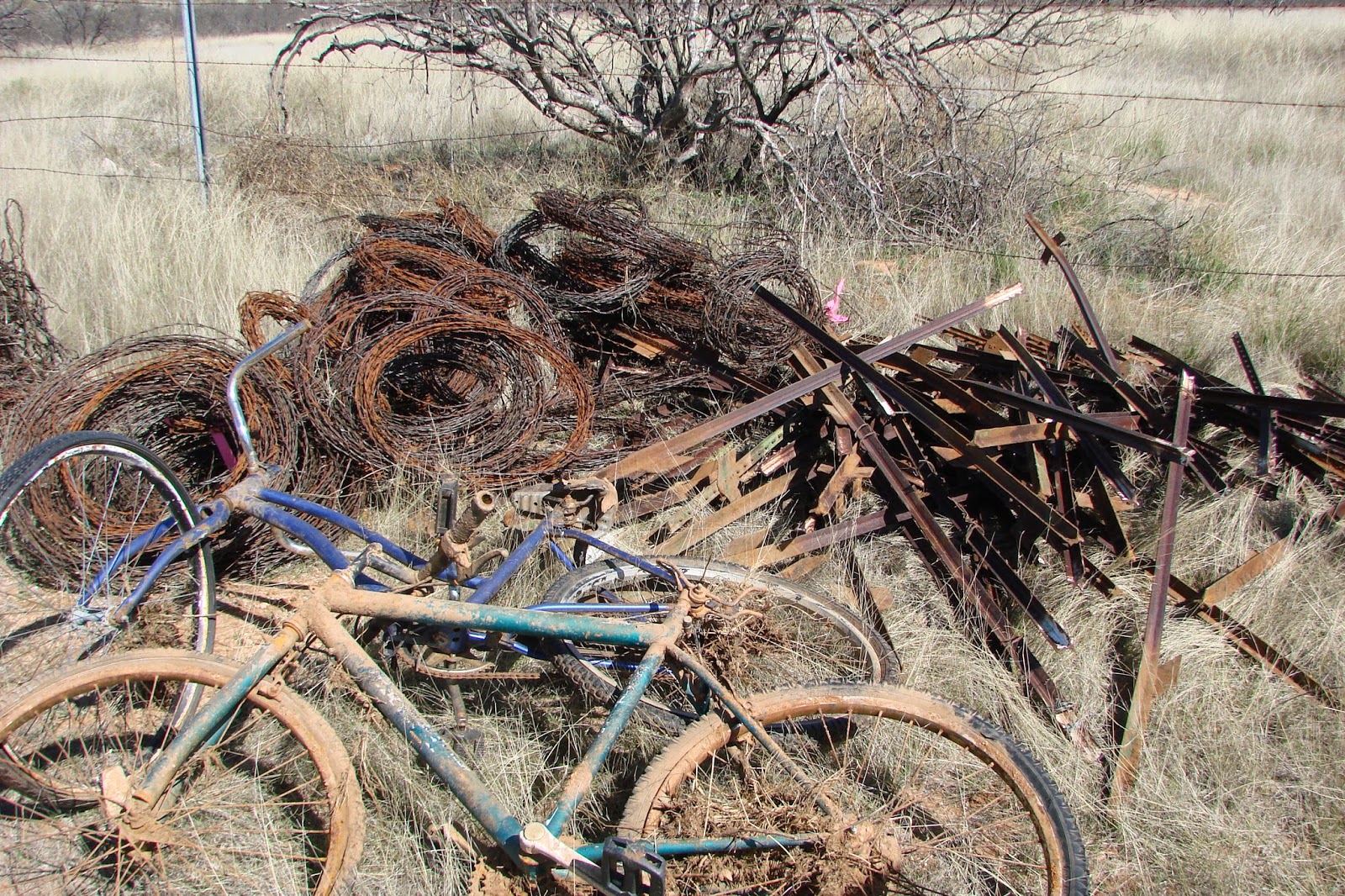 This is one day's haul. The bikes are often found abandoned, we were told, by people crossing the border into the US. And part of the time, we were only a mile from the edge of Mexico. 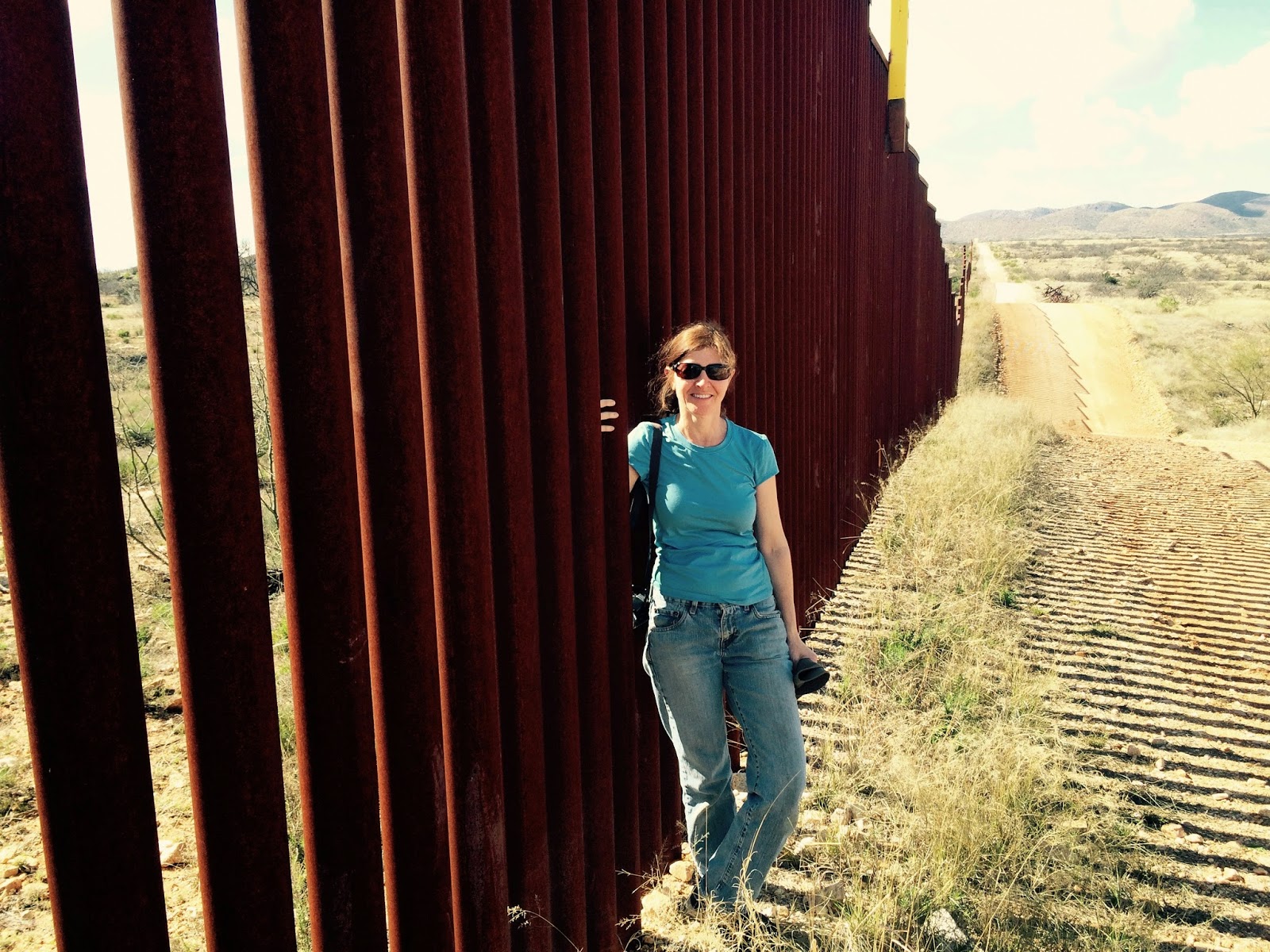 We took a quick trip to see the post -9/11 fence. A rather creepy (and insanely expensive) structure that does nothing whatsoever to solve the problem of illegal immigration. It does, however, impede the movement of various migratory species and also involves the abolishment of environmental protections in a 100-mile wide swath along the border. Your tax dollars at work.
Posted by Secret Agent Woman at 9:52 PM