Gardening tasks have occupied my time, but I do want to keep moving on this travelogue so that it doesn't stretch into winter. I'll be around catching up with blogs later this weekend. 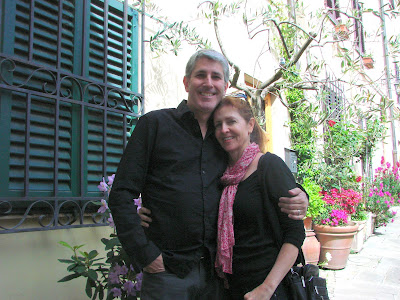 On our last full day in Tuscany, we drove back into Castellina after another great breakfast to have walk around. It was a gorgeous day again, not a rain cloud in sight. 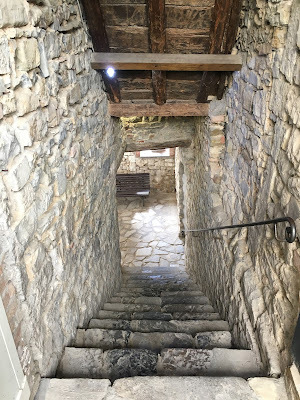 Down into the medieval tunnel and over to Le Volte Enoteca where the proprietor of the little wine shop had given us such a good recommendation on Il Cantuccio a couple of nights earlier. We told him we were looking for a nice, romantic dinner and he did not lead us astray. But more on that in a bit. 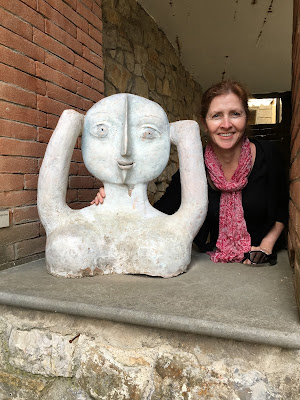 I imagine this cheerful looking statue greeting the sun in the window each day. It had become a familiar sight so I stopped for one last visit. We'd become old pals, she and I. 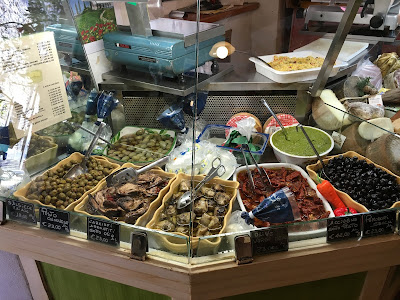 We stopped in this little market to get a couple of bottles of water and some food for a picnic lunch - an apricot, a pear, a plum and and unidentifiable small fruit that I'd tried at breakfast, couscous salad, and some local green olives. 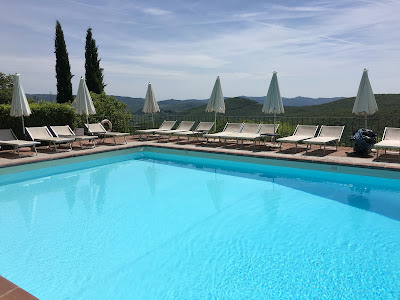 The hotel had a pool at the far edge of the property, and we didn't want to leave without spending at least a little time there. We could hear birds singing, including the distinctive cuckoo's call. There were swallows flitting around, dipping down to take a sip of water from the glassy surface. 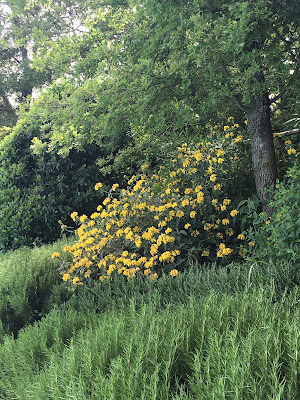 Huge banks of rosemary flanked the backside of the pool and their fragrance drifted over us as we lay in the dappled shade of the trees. We watched lizards skittering by on the warm paving stones until we drifted off. 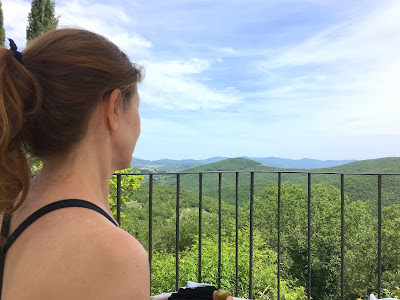 After dozing for a while, we moved to chairs by the edge of the hill to have our picnic. We could see several castles from where we sat under an umbrella. My husband took a short swim but I found the water a little too cool. It was sunny and breezy that afternoon, and absolutely blissful. 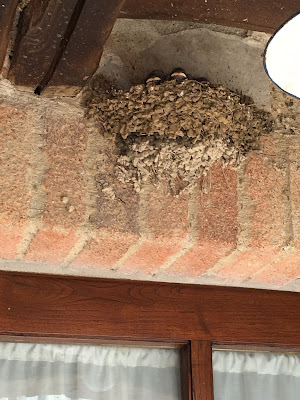 Walking back to our room I noticed swallows flying into a doorway and went to investigate. I found several swallow nests made of mud, and had to duck as the alarmed parents dive-bombed me. 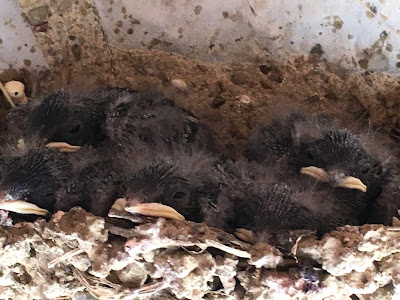 We found a chair to give us a view into the nests.  Grumpy looking baby swallows stared back at us, probably wondering why we weren't bringing them food. 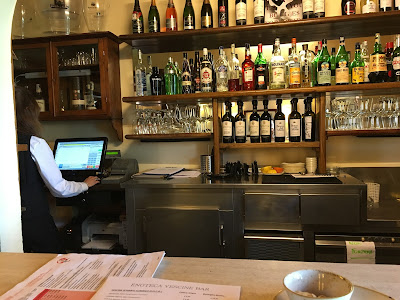 We changed for dinner and then went over to the hotel's lounge to do another wine tasting. We wanted to have a case of wine shipped back from the Vèscine wineries owned by Il Borgo but weren't sure if we should do all Chiantis or add in some white wines. We had a lot of leftover white wine from our wedding and both generally prefer reds. As we vacillated, our host Mara offered us a sparkling red to try. It was surprisingly refreshing and we added five bottles of it to complete the dozen. In the case we also had two bottles of Prosecco, two of Chianti Reserva and three of the Chianti Classico. 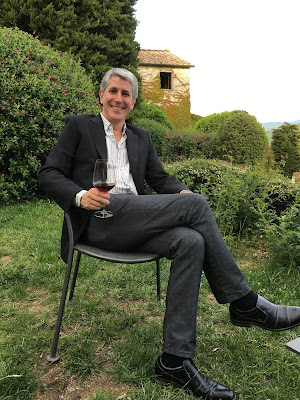 Seriously, what's not to like about having a glass of local wine in a heavenly place like this? We felt positively Italian. 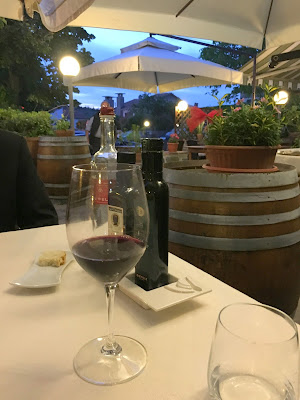 At last it was time for dinner so we headed to the place the wine shop owner had told us about. The Albergaccio was another Michelin Guide restaurant and it was also amazing. We started with a glass of Prosecco and then a bottle of a Gran Selezione Chianti Classico from Greve. The breads, homemade, were probably the best we had in Tuscany. 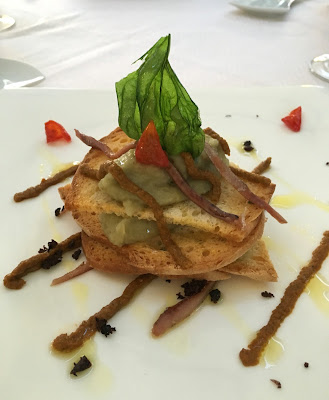 Our waiter, Claudio, told us he was studying to be a sommelier but was taking a break from his studies to work with an expert chef to better understand the food side of the dining experience. We choose the crispy bread, eggplant and salted anchovies from the Ligurian sea with a dry tomato sauce and tomato confit as our appetizer. And yes, as with La Botte the night before, I did take photos of the menu so I could remember exactly what we had. 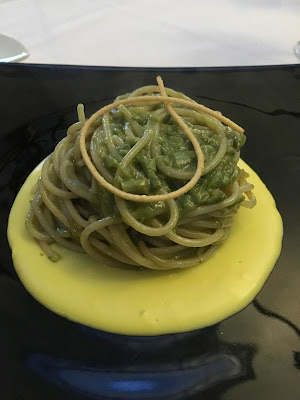 Our primi course was "spaghetti cooked in the manner of risotto" with asparagus and parmigiano cheese fondue flavored with saffron. 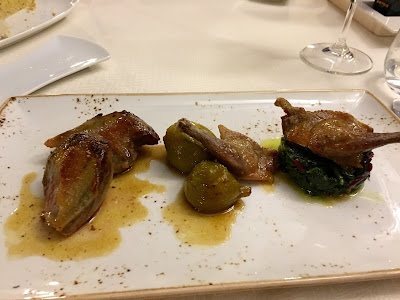 The secondi was identified on the menu as "The Pigeon." It was too funny and intriguing to pass up. It was spiced and perfumed with Marsala wine with caramelized figs and spinach. You could order either a whole or half pigeon, although I'm not sure it would be enough to mess with if it were a half. See that teeny tiny drumstick leaning on a fig? Small as it was, it was actually delicious. But I did find myself apologizing to random pigeons for the rest of the trip. 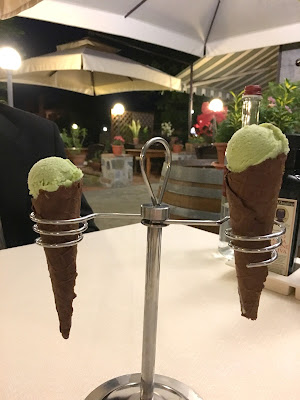 The chef Sonia came out to congratulate us on our marriage and sent out complementary paper-thin chocolate cones with basil gelato. 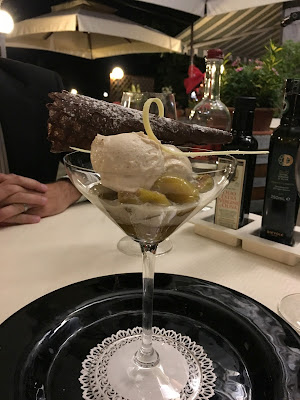 We couldn't resist the candied figs with cinnamon ice cream on the dessert menu so we had that with a glass of Francia Corta as an aperitif. Both these were complimentary as well. I cannot get over how kind everyone was to us. 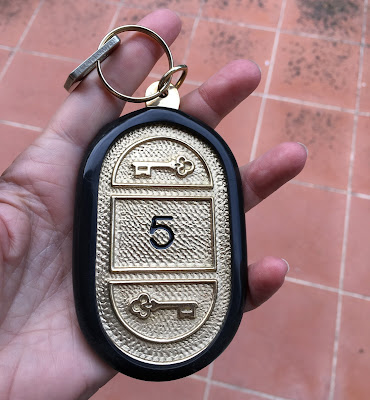 Back for our last night at Il Borgo in our beautiful mediaeval room, where we had the bottle of Tuscan bianco we'd picked up in Castellina chilled and waiting for us. I think we may have woken the neighbors. But it was our honeymoon!
Posted by Secret Agent Woman at 10:58 AM