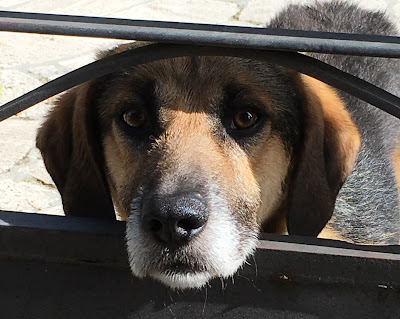 We drove out the next morning through Castellina and other villages, past this little dog hoping for a visitor. But we were headed for parts north. 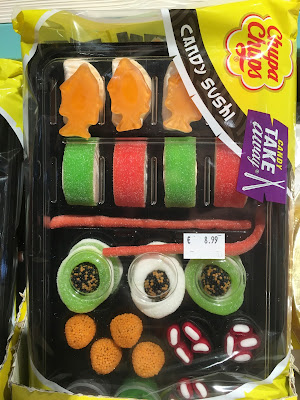 We decided to stop at one of the AutoGrills along the Autostrada, just to see what they were like. They carried things like gummy sushi, because why not? Also some very tasty looking pizzas and paninis and other foods unlike anything you'd see at truck stops or other interstate convenience places in the U.S. But we'd had yet another wonderful breakfast and were eager to get to our next destination. 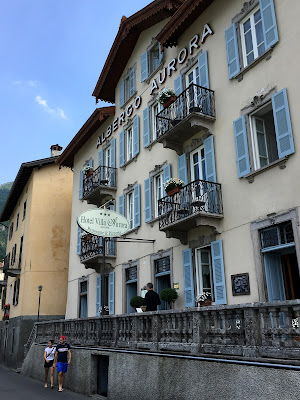 The city of Como was congested and not very appealing, but as we drove along the western shore of Lake Como, traffic thinned and the roads became narrow. We finally reached our hotel, the Villa Aurora, in Lezzeno. That first balcony was ours. 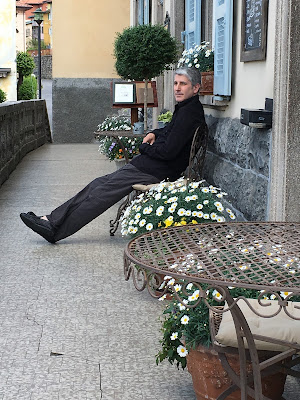 It was a slightly cooler day, but still sunny and nice. The parking is so tight that you have to surrender your keys and wait for your car to be parked for you. 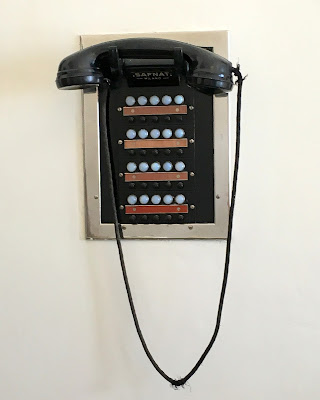 The hotel staff was very friendly and accommodating, and the helpful concierge on duty gave us instructions about breakfasts and what the hotel's restaurant offered. 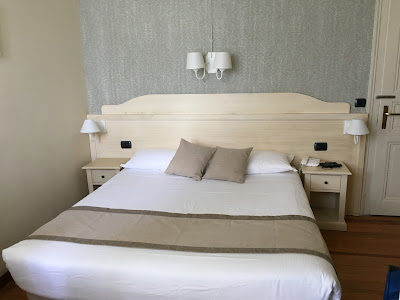 Our room was plainer and more Swiss in style. but the view... 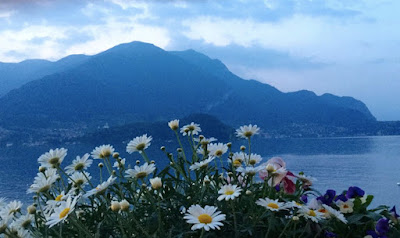 looking out over the planter filled with flowers on the balcony railing at the mountains on the other side of the lake made up for it. 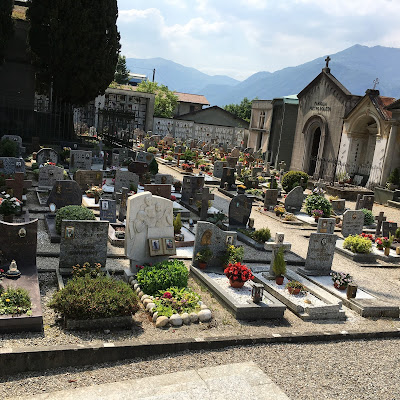 It was starting to warm up so we decided we'd take a walk and find a place to grab lunch. The walk turned out to be a little treacherous as the roads were extremely narrow, there was no shoulder to speak of and cars slowed for no one. I'm not saying the graveyard was filled with traffic accident victims, but I'm not saying it wasn't. 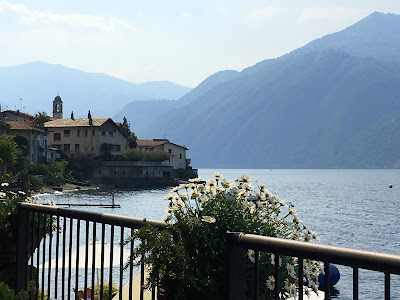 It was so beautiful along the lake. Beautiful, but closed. There was not a single place open to eat that we could find. 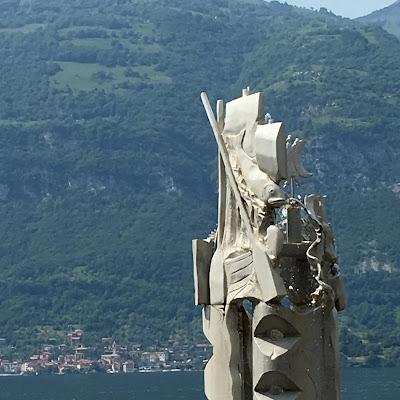 Eventually, we turned and made our way back along the shoreline to the Aurora's restaurant, across the street from the hotel. 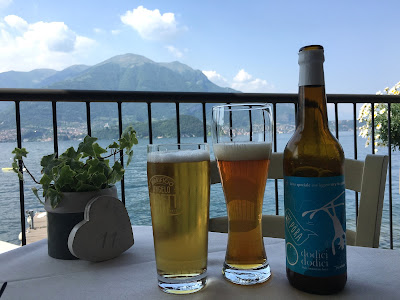 We ordered a couple of paninis and local beers. In contrast to our time in Ireland, these were the only beers we had on the whole trip. Because it was Italy, and we were there for the wine. 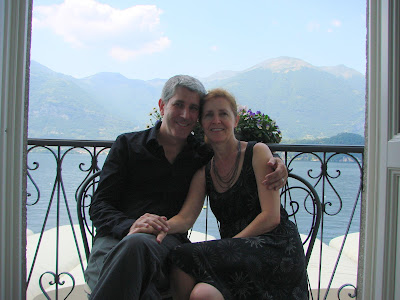 We made a reservation for dinner on Sunday, which would be our last night in Italy, using only the Italian we'd learned. Then back to our room to make a decision about how to spend the remainder of the day. It was still early, so we decided to drive on up the coast to Bellagio. 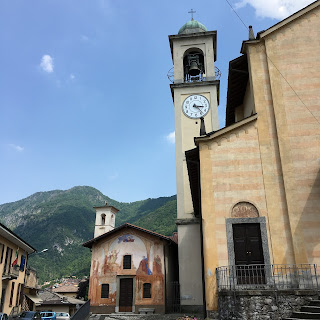 More winding narrow streets, more absurdly aggressive drivers. But no end of things to look at along the way. 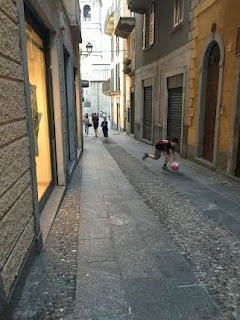 The main drag of Bellagio was very touristy, but some of the back alleys were quieter. We did stop at the Albergo Firenze, down by the lake, for a glass of wine at an outdoor table. They threw in appetizers, which was nice. 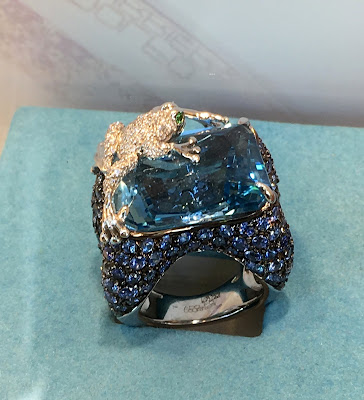 Touristy places bring out the snark in both of us. I found this in one store window, for instance, and declared that I was deeply unhappy that I did not have a ring like this one. It almost seemed like a blingy weapon. 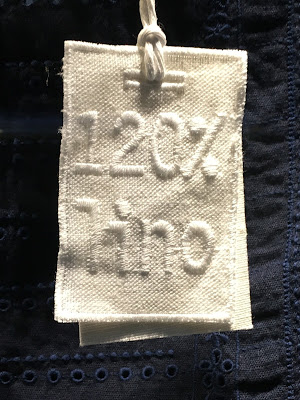 I get that this is a brand name, but how would you even have 120% linen? We giggled about the urban sombrero woman, the Sophia Loren wannabee, the guy with the bizarre bowl cut, and the couple who ordered mineral water for their dog. 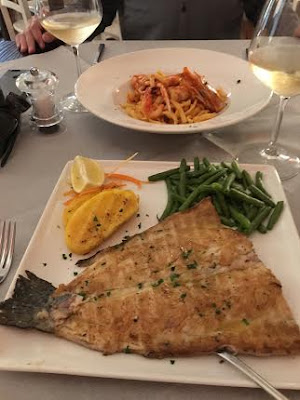 We wanted a simpler dinner this night, and found a place with some light seafood items on the menu. Turns out it was a restaurant which catered to Brits (as evidenced by the Union Jacks on the wall), so the food was sort of bland. The name "Far Out" should have clued us in, but we were hungry. The restaurant played light jazz renditions of pop classics and the decor was kitschy, but the waiter was very friendly and we had fun. We ordered grilled lake fish with polenta and green beans, and tagliatelle with prawns and langoustines. Honestly, we might just have been spoiled by some of the outstanding meals we'd had recently. Our waiter had asked about our trip, and after dinner, he brought us complimentary dessert wafers and Francia Corta. We decided we should pretend every trip from here on out is our honeymoon. 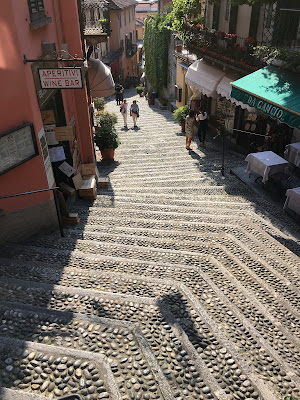 We found a wine shop down a cobbled street and asked about the wine we'd had at dinner. The shop owner let us taste a Francia Corta there and we bought a bottle to bring home and also a bottle of local white wine for the hotel. 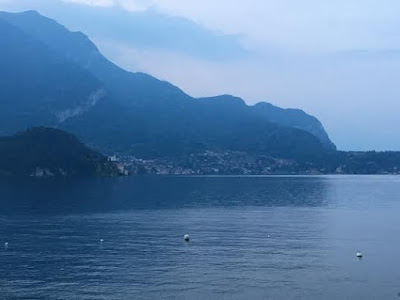 We arrived back at the Aurora at dusk and spent the rest of evening on balcony drinking wine and watching the bustling street below.
Posted by Secret Agent Woman at 2:17 PM