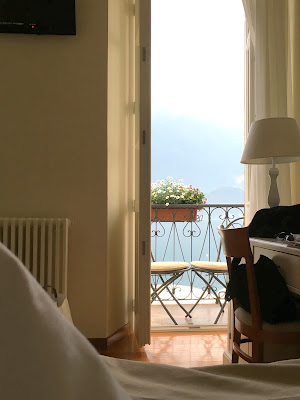 We went downstairs for our last wonderful breakfast, and then returned to our room to have fresh cornetti and cappucino in bed. The hotel was built in the 1900's and has a nice old world feel to it. It was overcast but warm enough to have the balcony doors open so we could hear the church bells ringing in town. Our last day in Italy was the only rainy day we got. 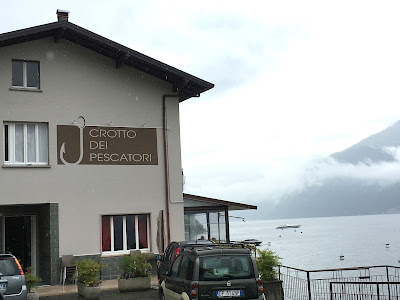 About noon, we went down to the hotel restaurant wanting to get pizza because it seemed strange not to have pizza at least once in Italy. It would be like not having fish and chips in Ireland. As it turned out, the hotel didn't make pizza on Sundays until dinner time. But we' were planning a nicer dinner than pizza for our last night. The obliging concierge called a restaurant on the other end of town and made a reservation for us at Crotto dei Pescatori. 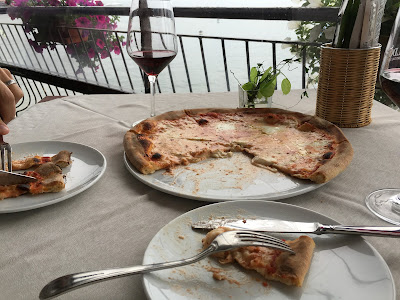 The dining room overlooking the lake was filled with a couple of large family groups and two or three other couples. We were the only non-Italians in the place and it was lovely listening to the loud, happy talk around us. We had a simple pizza Margherita and a Chianti Classico. 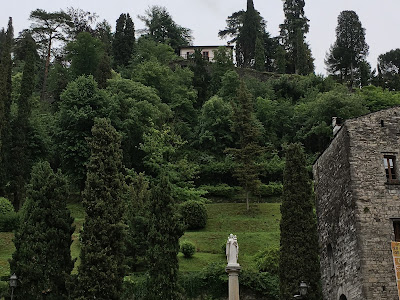 With a rainy afternoon ahead of us, we decided to spend the rest of our last day back in Bellagio. We walked up to a gelateria for cups of gelato, which we ate outside under the balcony. 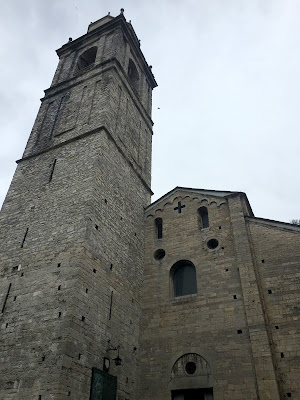 Across the piazza was a Catholic church, Chiesa San Giacomo (Basilica of Saint James), built between 1075 and 1125. The lower part of the bell tower was originally a defense tower. It is of Romanesque-Lombard architecture. 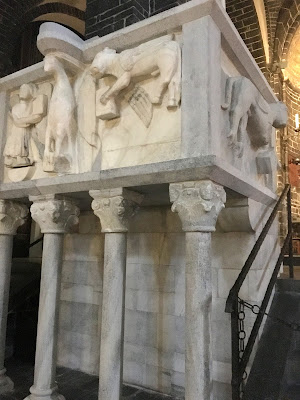 We walked over to have a look at the interior of the church, including the carved marble balcony. 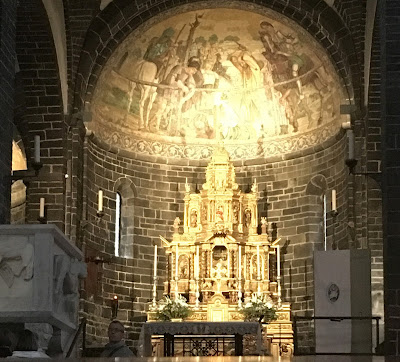 The glowing main altar from the 18th century was of carved gilded wood by a local sculpter, Domenico Pini. There was also a smaller altar from the late 500's, art from the Perugina school, tryptics from the 900's and a 12th century cross. 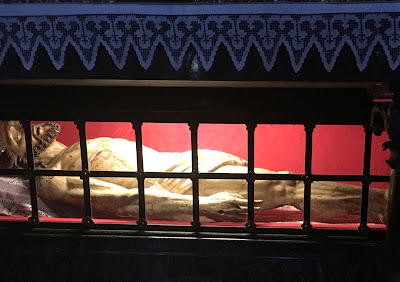 And a Spanish Baroque polychrome wooden statue, "The Buried Christ" in a lighted sepulchre, which is carried in a procession every Good Friday. The story is that it belonged to a Spanish settlement and a the tip of Lake Como and was swept up in a flood of the Adda River and washed into the lake. Bellagio fishermen were reported to have found it and brought it home to their own church. 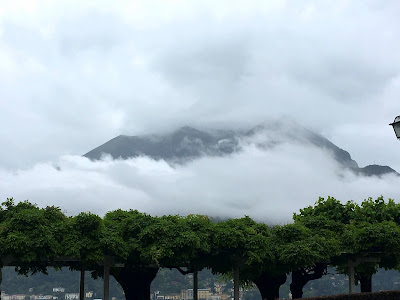 We window-shopped again along the lakefront, in search of a leather wallet to replace the battered one my husband had been carrying for almost a couple of decades. As we looked into one window filled with mementos, I heard a German woman behind us say something to her companion that seemed to include the words "schnicke schnocke." That is now my new word for souvenirs. 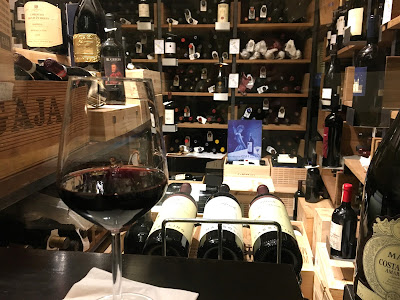 We finally located a leather shop on a side street and bought a wallet. A fellow blogger had recommended I try a barolo wine while I was there (thanks, Mike!), so we stopped a cozy little wine shop, Aperitvo et al to have a glass. Delicious. We also bought a bottle of Prosecco for the night. Another American was talking loudly to the folks at a nearby table about his distaste for Trump. Which was fine until he started insisting that we would take even Mussolini over Trump. Um. Yeah. We'd take a brutal fascist dictator. I find Trump appalling. Even dangerous. But Mussolini? We quietly took our bottle of Prosecco and headed to our car. 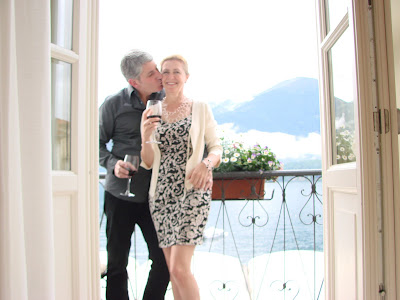 Back at our hotel late that afternoon, we dressed for the last dinner of our honeymoon. 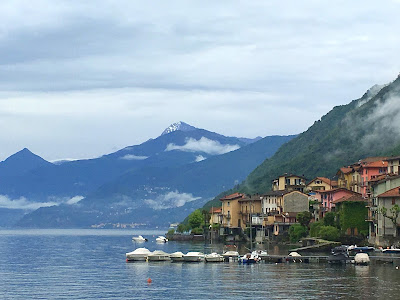 The restaurant has such a beautiful view over Lake Como. The tallest mountains were still snow-capped. 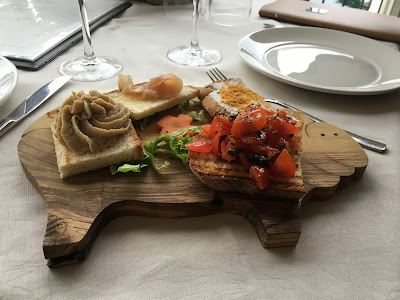 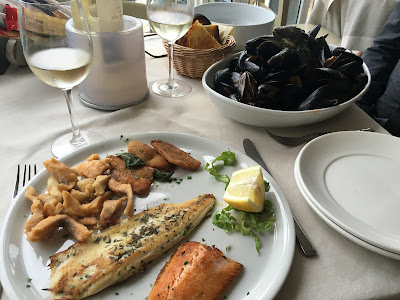 We split a plate of mixed lake fish prepared four different ways and a huge bowl of steamed mussels with hot pepper and parsley. The mussels, especially, were delicious. We finished with a lemon sorbetto. 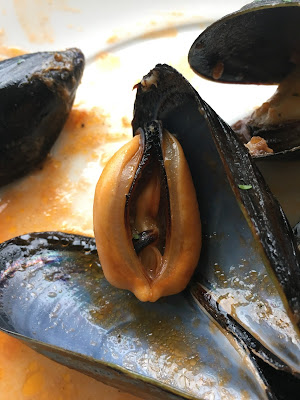 But, is it just me or are mussels bizarrely personal? 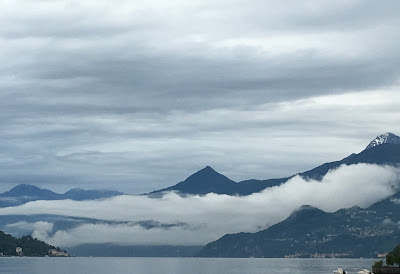 The clouds were moving back in and we retired to our room where we had chocolates and that bottle of Prosecco chilling. As we were getting undressed for bed, we stopped to slow dance on the balcony in the light rain. At one point I looked down and accidentally made eye contact with a man crossing the street, and we ducked back inside. I wonder if he's told people the story of seeing a woman in black lacy underwear dancing in the misting rain on a balcony?
Posted by Secret Agent Woman at 9:41 PM