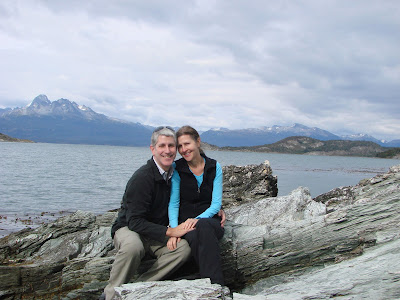 The weather was wonderful the next morning, and we headed west of Ushuaia to the Parque Nacional Tierra del Fuego. This was Argentina's first coastal national park and it is anchored on one end by the Beagle Channel, and extends northward to cover a total of 240 square miles. 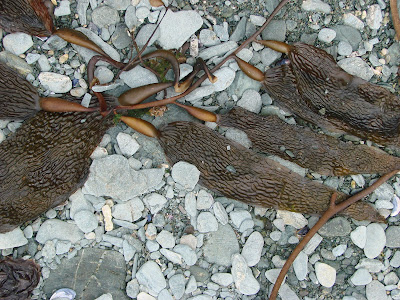 It's a really wonderful collection of contrasts, with rocky seashores, lakes, waterfalls, forests and mountains. 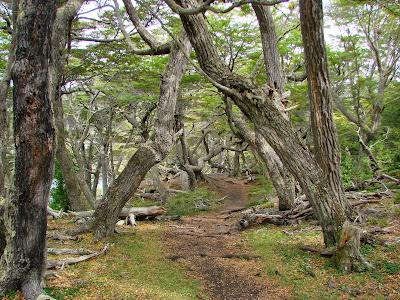 The subantarctic forest has three main types of trees, all forms of beech: the evergreen coihue or guindo, the deciduous lenga, and the partially deciduous Antarctic beech. These are lenga. 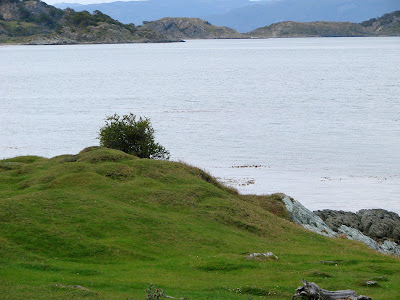 We took the Senda Costera (Coastal Trail), which runs from Bahia Ensenada to Bahia Lapataia on Lago Roca. 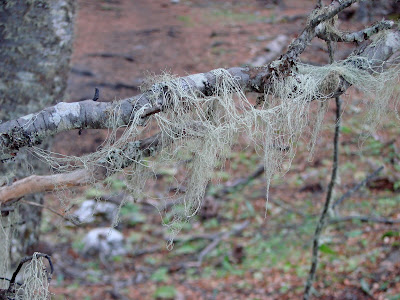 Most of the trees were draped in wispy bits of what I assume to be Spanish moss. 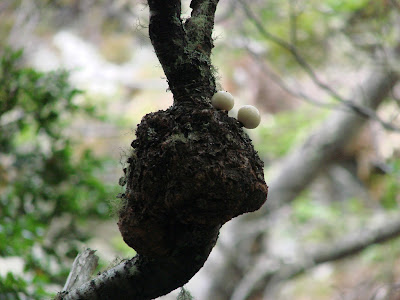 Many trees have these strange tumor-like growths and we noticed that local craftspeople use them to make bowls and other art. This one also had a pair of white eye-like fungi that made it look like a muppet. I believe they are Indian bread fungi. 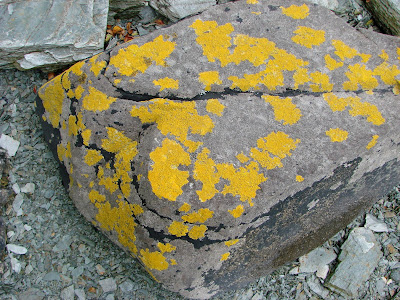 If I could have gotten away with bringing home this big rock covered with yellow lichen, I would have. Pretty sure it would have put me over the luggage weight limit. (Which, incidentally, was only 33 pounds on the Buenos Aires to Ushuai leg of the trip. That's why we each traveled with only a carry-on bag and a smaller daypack.) 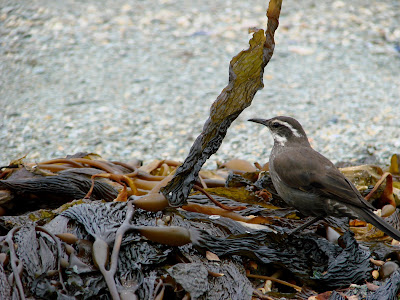 As I went to snap a photo of this rusty-backed monjita hopping along, he suddenly grabbed a piece of kelp with his beak and flipped it into the air over his head. 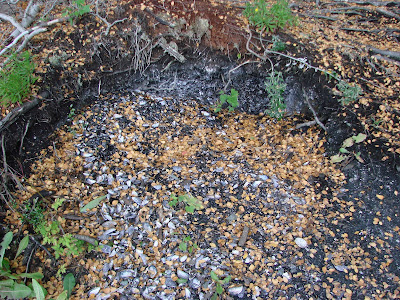 Above the shoreline are middens, dumps for cooking and other domestic waste, left by the Yámana Indians. This indigenous tribe traveled by canoe and lived primarily on mussels and sea lion. The shells from their cooking remain in these pits. They occasionally wore sea lion capes for warmth but often went naked and always barefoot, even in the snow. 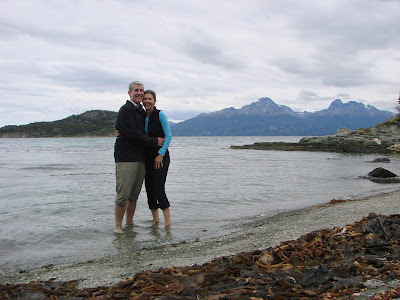 Again, wading in. This time into the Beagle Channel itself.  It was about as cold as the glacial stream. I'm smiling in this picture, but I assure in the next photo I am not. The Yámana women who swam in these icy waters to collect mussels would have been appalled by how quickly I had to hop back out of the channel. 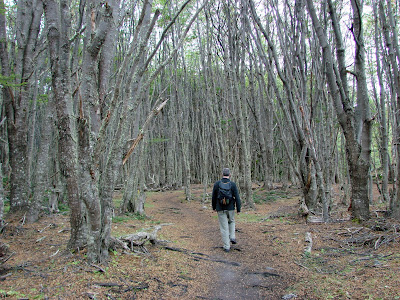 The lenga trees carpet the trails with tiny leaves and make for a wonderfully soft path. 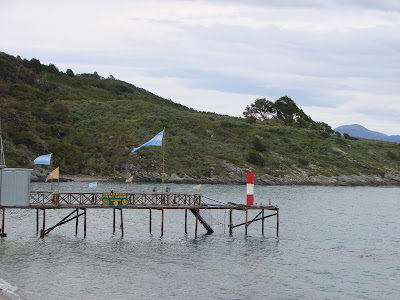 Partway along the trail is the southernmost post office in the world, on a pier in the Beagle Channel. 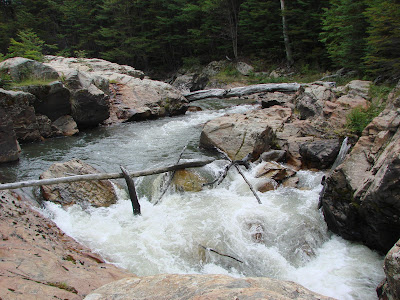 We also hiked a trail to see a small waterfall, Cascada Rio Pipo. 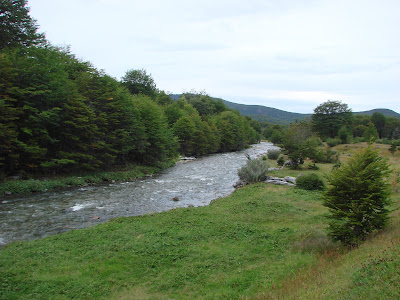 We were all alone as we walked along the Rio Pipo. 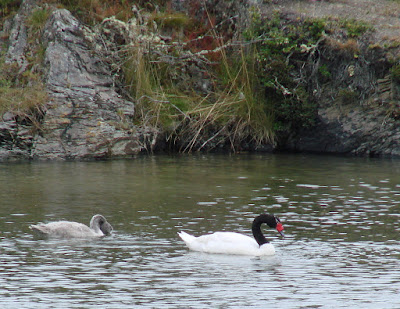 We saw black-necked swans, with their downy grey cygnets swimming alongside, in one of the small lagoons. 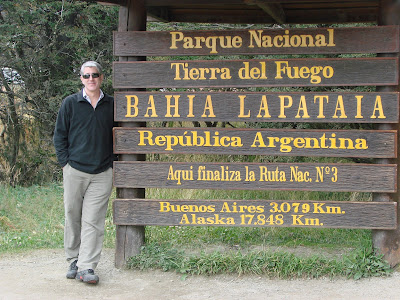 Ruta 3, which runs from Buenos Aires all the way to Lapataia, is the Argentine section of the Pan American Highway. It begins in Prudhoe Bay, Alaska and runs southward (with the exception of a small impassable bit of rainforest in Central America) to end here. 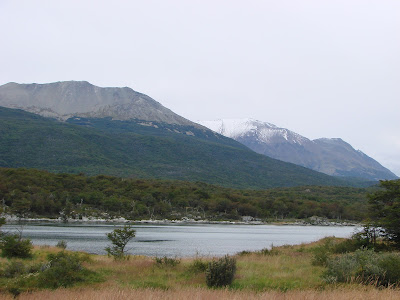 The most striking thing about the hike was the snow-capped Andes as a back drop. 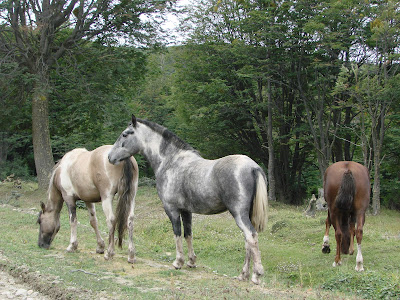 As we were driving out, we passed horses roaming freely. Restraining animals doesn't seem to happen a lot in Patagonia. 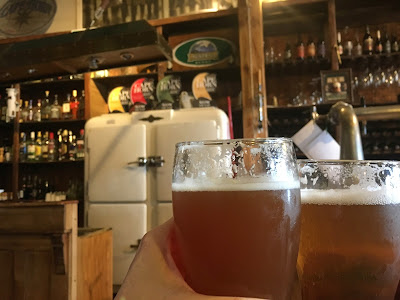 We went back to Ramos Generales for a brie panini and a couple of Ushuaian craft brews - a Beagle Fuegian IPA and a Cape Horn Pale Ale. They were both very good. We were later told by a local that while the microbreweries make good ales, the national beer, Quilmes, is awful. 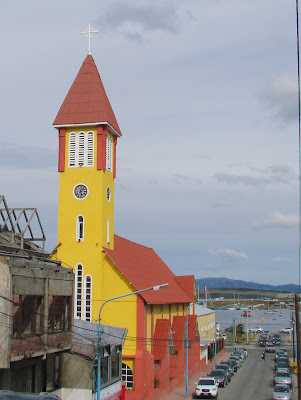 After lunch we just walked around Ushuaia and did a little shopping for souvenirs for the kids and the fabric we were looking for. 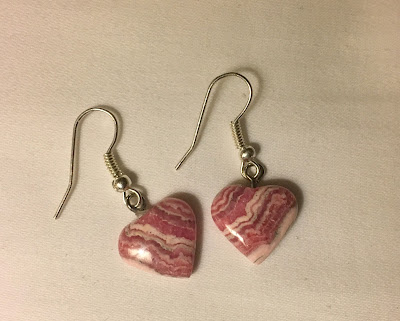 And earrings - I generally bring home a pair of earrings when I visit a country. I got a pair of hearts of pink banded rhodochrosite that is mined in Argentina. 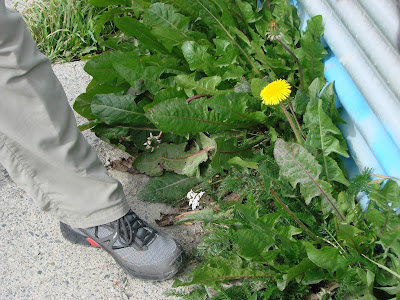 The gardener in me couldn't help but notice that dandelions grow monstrously large in Tierra del Fuego. We found a grocery store and stocked up on wine and foods for our trip to Rio Gallegos the next day. I was looking for additional foods while my husband went to get in line. Two young Mormon missionaries held his place for him so he could find me and we talked with them about their experiences in Argentina. 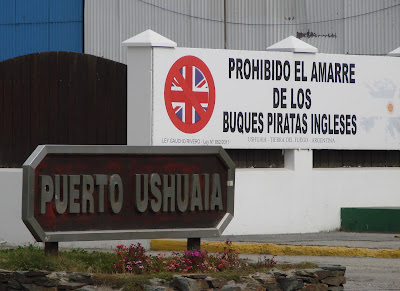 The mooring of English pirate ships is apparently forbidden at Ushuaia's port. Arrrrr! 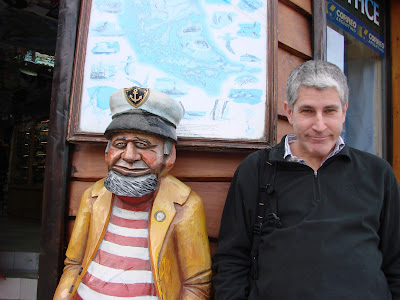 My husband may be a show-off about wading into cold water, but he is also endlessly patient with my bizarre photo requests. 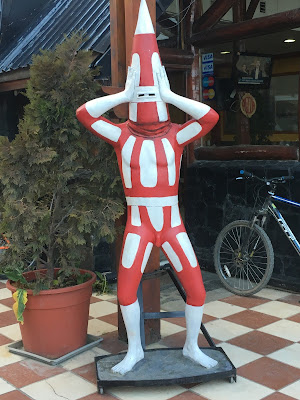 I did not, however, make him imitate this statue of a Yámana man. This tribe, also called the Yaghan, were part of the group of people called Fuegians by Europeans. The men wore body paint and conical bark masks for rituals. Tierra del Fuego was occupied more than 10,000 years ago. The indigenous people have been found to be genetically distinct from Native Americans to the north and there is evidence to suggest that they are descended instead from Australian aboriginals. However, the arrival of Europeans with their diseases and megalomania soon took the Yámanas from 3000 people to 100 over the next 20 years. Now they are essentially extinct. It's heart-rending. 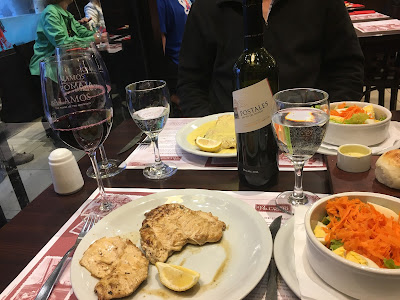 We had dinner that night at Villagio, a restaurant originally for Italian immigrants.  We had two kinds of grilled chicken, one with a really delicious creamy mustard sauce, along with salads and a bottle of malbec. 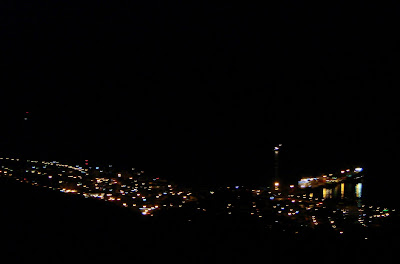 The lights of Bahia Ushuaia at night from our cabaña. We had bought a bottle of wine in town the day before and brought it back to have a glass. Our hosts got a corkscrew and glasses for us, and we settled in for our last night in Ushuaia. Or so we thought.
Posted by Secret Agent Woman at 8:35 PM