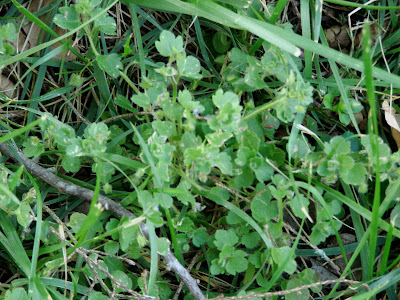 With highs now in the 70's every day, it is time to be out in the yard as much as possible. And I had one of my crazy gardening woman projects in mind. The front yard, in spite of the seeding we did last fall, was awash in weeds. Some, like the wild violets, I'm happy to have. But the chickweed and bittercress were choking out everything as they spread in dense viney mats. 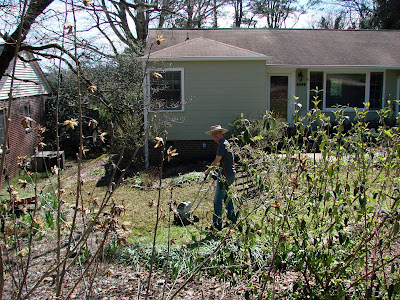 I had wondered if it might be helpful to start by tilling the yard and my husband said it was too bad we didn't have a rototiller. But we do! I'd bought an electric tiller when I moved in. He tilled the garden out back for me and then went down the street to ask our landscape architect friend if we should till before covering the grass. The friend said we should. Later, when it became clear that the dense clay in the front yard was much harder to work with than the heavily composted garden that I tilled a couple of years ago, my husband announced that the next time he had the idea of asking our friend for gardening advice, he'd walk down the street and then just come back and pretend he'd been advised not to bother. 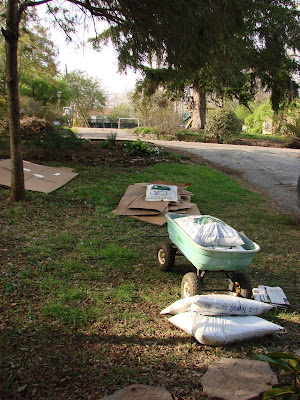 We did not till the side yard because I was afraid we'd damage the roots of the enormous hemlocks that line up along the edge. This plan of mine involved lots of topsoil and lots of cardboard. Many, many car loads full, in fact. 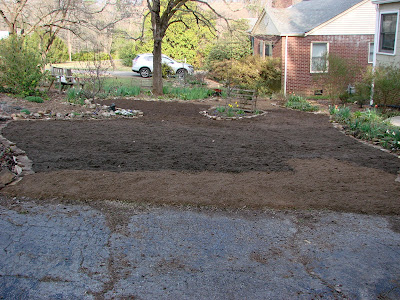 Eventually, we'd laid cardboard over the entire yard, covered that with brown builder's paper, and then a thick layer of topsoil. This was painstaking work and involved moving the stacked field stone borders to tuck the cardboard and paper under the stones. Each night we'd go to bed with our backs aching. The yard proved irresistible to our cat, who rolled in the dirt and tore around in circles, stopping periodically to scratch a tree like a jungle cat. 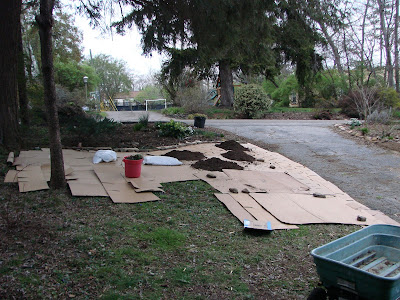 Then we started the process again with the side yard. That red bucket contains clumps of wild violets I dug up to put back in the yard. I know - they are weeds. But I love them. 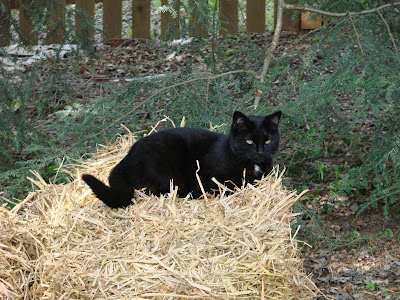 I got a couple of bales of straw to cover after we'd seeded. Hodr felt it made a fine perch from which to supervise my work. 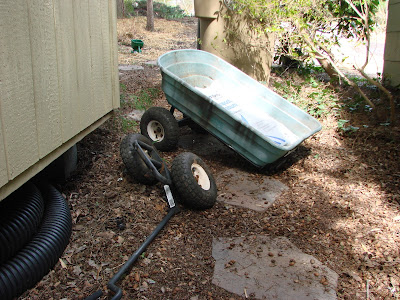 As I was transporting some bags of compost to the back yard for another project, we had an incident. The metal connector for the front wheels had sheared off a year or so ago and the wheels finally snapped off. That little wagon served me well for about eight years, so I can't complain. 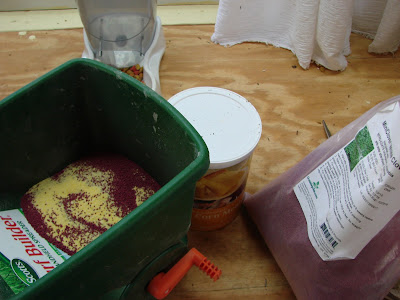 After all the yard was covered in cardboard and soil, it was time to seed. But not grass. I had decided to try an all-clover front yard. Mini clover, which is a tiny version of Dutch white clover. It's supposed to get no taller than 4 inches and should eliminate the need to mow. And clover adds nitrogen back to the soil, which will just make it healthier. The seeds are so tiny they need to be mixed with something. I used cornmeal. 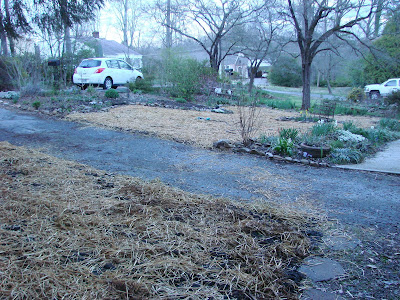 I planted back some of the wild violets, and also planted some hepatica, Virginia bluebells, ferns and mondo grasses in the side yard. Then I scattered the clover seed, covered everything with straw and watered. We finished the project just in time - we have rain in the forecast starting late tonight and continuing off and on for the next four days. Sometime later in the summer, I am hoping I'll be able to post a photo of a nice clover-filled lawn.
Posted by Secret Agent Woman at 9:48 PM