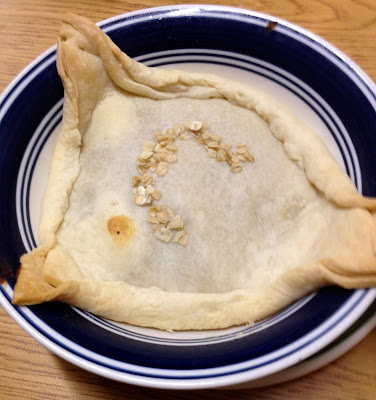 Another school year is winding down. My younger son and I drove to my older son's university to bring back a load of his stuff in advance, while he stays on for finals. I told him I'd take him and his girlfriend out for dinner and he suggested that he cook for us all at his apartment instead. Who was this kid and what did he do with my son? After his roommate moved out mid-semester, he happily (and illegally) moved his girlfriend in for the last month or so. It's University housing - a small one-bedroom apartment with a minuscule kitchen, a living room, little dining area and a bathroom. It was funny to watch my son being domestic - working the dough for the pies (mine was vegetarian so he marked it with my initial with oatmeal), setting the table and asking his girlfriend to check the progress of the challah bread he'd made. The apartment was remarkably neat and decorated in young-adult with a couch facing the monitor for video games and guitars in stands. I was told that there was only one comfortable chair in the place but the banjo lives there. I asked why they kept a banjo in the only comfortable chair and my son said, "Because it's the banjo." 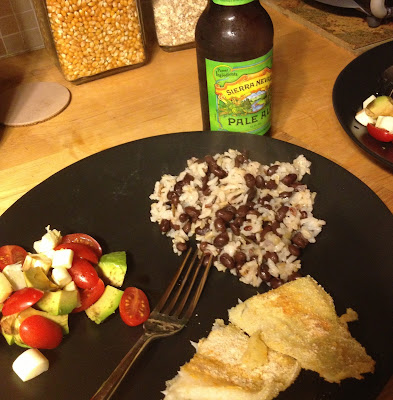 My plans to walk the city's greenway path and hang out by the pool were thwarted by weekend-long cold rain. While my younger son bunked with his brother, I huddled in a motel room watching a Glee marathon. Why? Because I was too disgruntled by the weather to read. Yesterday morning we loaded up the car (in the rain) with as much of his belonging as we could cram in, made the four hour drive home (in the rain) and then unloaded everything into the house (again, in the rain). I shut all the windows, unhappily turned on the heat and made a vaguely Cinco de Mayo-like meal for my younger son and myself. I'm aware that those of you who are still getting snow will have no sympathy, but May here is usually early summer. And me, I'm a summer person.
Posted by Secret Agent Woman at 6:49 AM