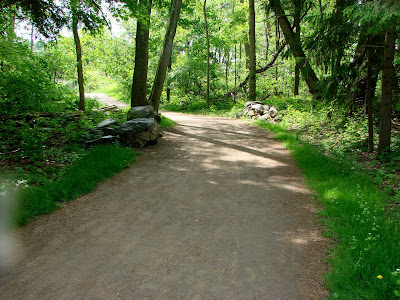 Just down the road from where my friend is staying is Minute Man National Park, where the Revolutionary War began in 1775.  British soldiers marched this Battle Road Trail on their way from Boston to Concord and back. There are markers along the way giving distances to Boston Harbor. 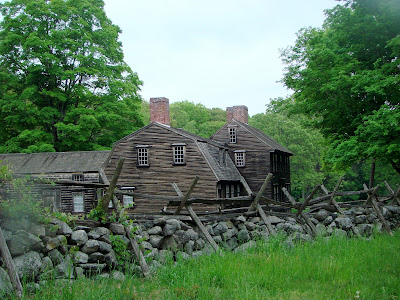 Hartwell Tavern in Lincoln was a gathering place for local folks. The couple who ran the tavern and farm lost the first five of their thirteen children to diptheria. On one of my walks, there was a huge group of school kids listening to someone dressed in period costume. I'm guessing they didn't pass along that particular grim factoid. The highlight of the talk, judging from the happy shrieks, was the firing of a musket. 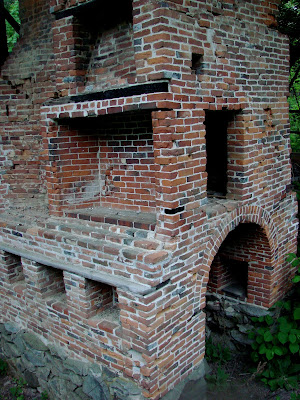 I walked with my friend Sunday evening after we got back from Cape Cod. He wanted to show me some of the more interesting features, like this multi-story fireplace. The house around it is gone, but you can see where it opened into rooms on different floors of the building. 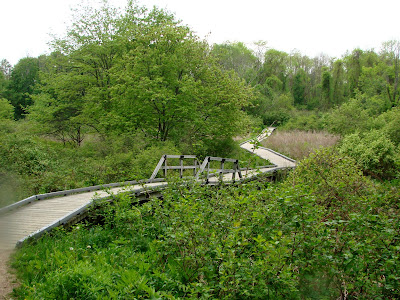 Where the Battle Road trail passes through wetland, a boardwalk protects the marsh. 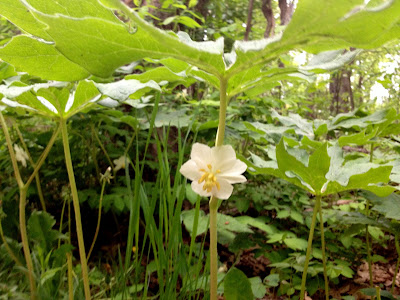 We passed a clump of Mayapples and I checked to see if any of them had fruit. Not yet, but I was pleased to see the flowers hidden beneath the umbrella-like leaves. 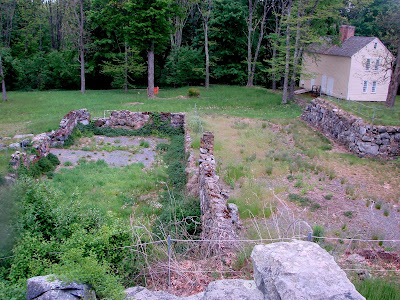 We argued some about what this old structure might be.  It has two sections and I took this photo standing at the end of an earthen ramp that lead up to it via a forked entrance. The house belonged Job and Joshua Brooks and there was a slaughterhouse and tannery nearby, but I don't know if this was related to either of those. 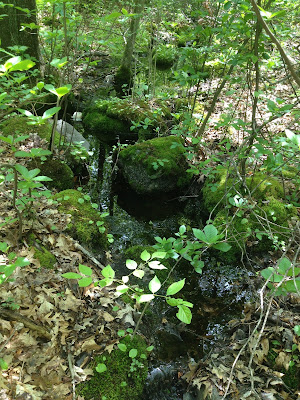 The next morning I went back and walked some more on my own while my friend went to work.  I took the Vernal Pond Trail back into the woods to this little creek. 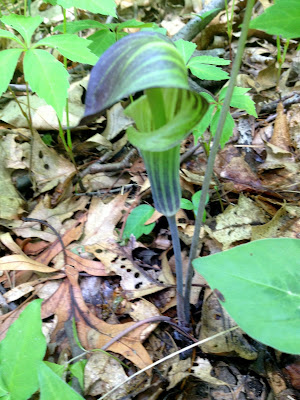 Along the way, I spotted a nearly-hidden Jack-in-the-Pulpit. I find them endearing. 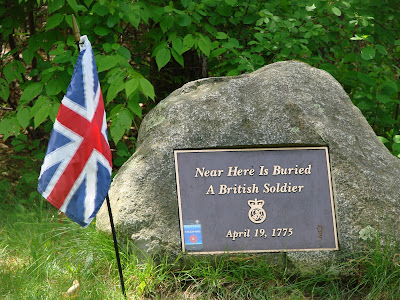 Back on the Battle Road trail, this time in the other direction. There were several of these signs with the oddly vague "near here." Next to the rock? Way back in the woods? What counts as "near here?" Every man between the ages of 16 and 60 in colonial Massachusetts was required to have a gun and train as part of the militia, to help the British fight against "enemies" (in this case the French and Native Americans). A smaller group of volunteer forces were trained much more intensively to be able to mobilize "at a minute's notice." (A complete aside - my old flame from Kentucky is part of a Joint Forces rapid response unit in the Reserves, required to be ready to deploy in 72 hours when called - sort of a modern day version.) These Minute Men were younger and enthusiastically non-Loyalist. According to the signs, the column of British troops walked along the road, with flankers on either side. The Minute Men would attack from the woods and fields. 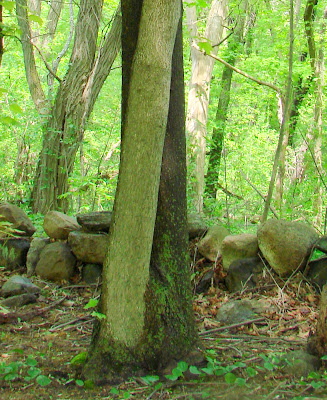 But it's peaceful here now and I happily wandered along the trail for a couple of hours. I liked this interracial tree couple. 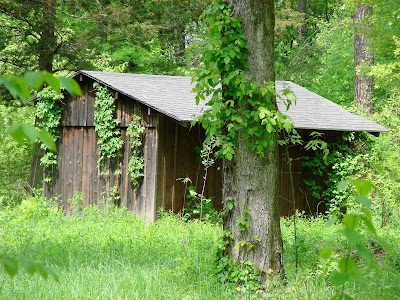 Some of the old buildings were less maintained than others. This shed has a healthy crop of Virginia creeper vines climbing it. 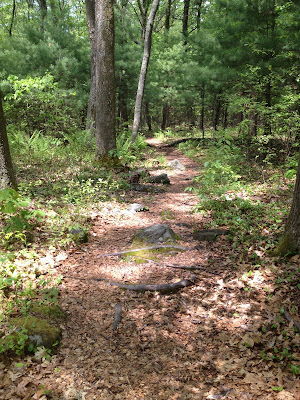 All told I walked 5.8 miles that Monday morning. I may or may not have gotten lost. Repeatedly. But finally, I made my way back to the rental car to make the drive to Logan airport.
Posted by Secret Agent Woman at 10:41 AM