I've decided to name her Manasa. 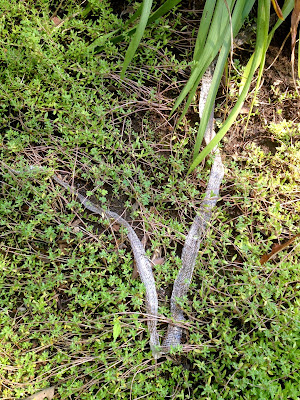 When I moved into this house in 2007, I found a shed snake skin wrapped in a bush alongside the house. I didn't think much of it until the next year, when I found a longer one in the same spot. I realized there must be a sizable snake living in the crawl space under the house. I was pleased to find a shed skin again the following year. A snake generally handles the rodent population and I'm appreciative. One summer I even found three babies in the garage and re-located them elsewhere. Because, you know, a snake in the crawlspace is just fine, but I don't really want snakes cruising around where I'm working. But for the last couple of years... nothing. I thought maybe she died. 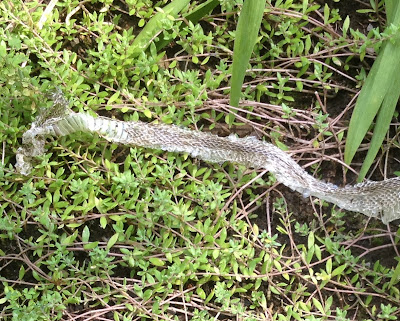 This morning, I looked outside and saw a skin and ran to tell my kids our snake was alive and well. They were entirely unimpressed. I tried to straighten out the skin to measure it, but could tell I was going to tear it, so I used a cloth tape measure. A little over five feet. Eastern ratsnakes can get up to 6 feet long, but this one is close to fully growm. 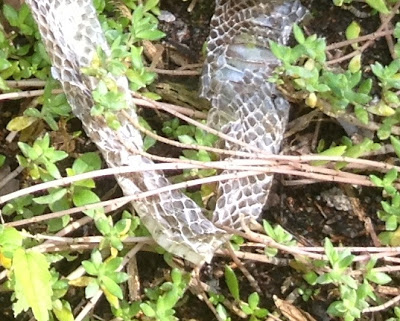 The shed was wound through the sedum, I guess to help pull the skin off. I've decided to leave it there, figuring it will either decompose or the birds will carry bits of it off to line their nests. And since I don't know if this is my original snake or one of her offspring, I'm naming her/them "Manasa," a Bengali snake goddess who is a fertility deity. She can help my garden grow.
Posted by Secret Agent Woman at 8:22 PM