I don't seem to be happy about this. 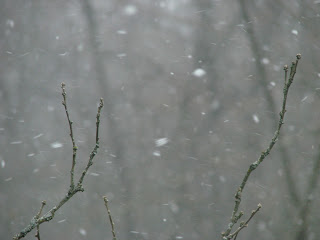 You know what that is? It's snow. On March 25th. Not just after Southern Spring has started (around the first of March), but even after the official start of Spring. Yeah, yeah, nothing is sticking. But it's been flurrying all day long and it's freaking chilly. Not that it's stopping my son or his friends who came over this afternoon. It's their Spring break and they are running around outside, hooded sweatshirts their only concession to the cold. But oddly, although even a hint of snow usually causes people to cancel their appointments in droves, on the off-chance that they might encounter a snowflake on the road, all 8 of my scheduled patients showed up. It's like they all said, "Hell, it's almost April, we'll just pretend this isn't happening." 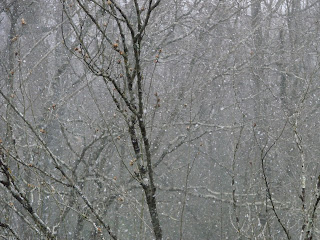 Sometimes when my son has his friends over, the little boy next door will tell me with great concern, "The teenagers are in the woods again." Like the Mongol hordes have arrived. I always assure him, "Sweetie, they're just kids, they won't hurt you." But they are loud and man-sized and to a 5-year-old they are both alarming and intriguing. He follows them around, running back to safety when they notice him. I find this amusing - my son and his buddies are actually a gentle lot. They may look fierce with their camo and machetes, but these same boys greet me with shy smiles when they arrive and make a point of thanking me for allowing them to come over. I'm happy to have them around. But you know what I'd be even happier about? Spring. I want it back, dammit.
Posted by Secret Agent Woman at 5:01 PM