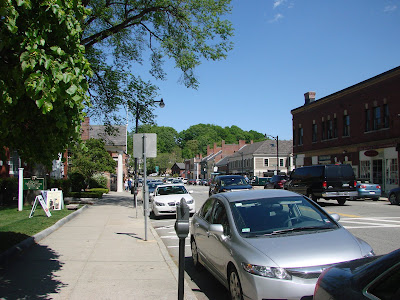 On about a week's notice, I decided to go up to Massachusetts and started re-scheduling people to free up a five-day weekend. A friend is working on a project that has him in Concord much of the time and it seemed like a good excuse to see the area. My flight to Philadelphia was delayed (of course), so they rerouted me to DC instead, and I made it into Boston only half an hour off schedule. 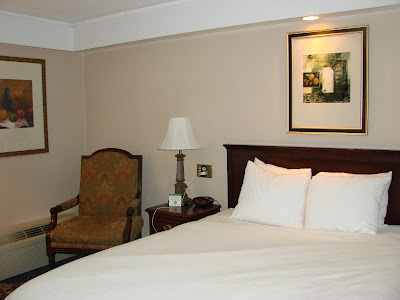 I'm not sure I'd like living out of a hotel for such long periods of time. Sure, it's nice having breakfast provided for you and someone changing the sheets and towels, but the whole living-out-of-a suitcase thing would get old. I managed the trip with only a carry-on because I like traveling light. 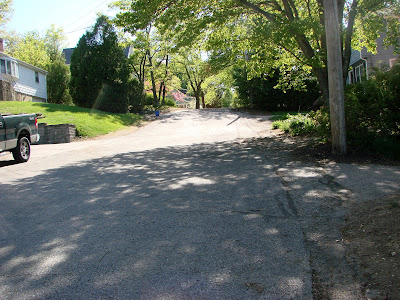 My first afternoon there, I drove my rental car over to Arlington, where I lived as a kid. My father went to the Naval Academy before he and my mother married, and several years later, the Navy sent him to MIT to get his master's degree in mechanical engineering, We were re-located to Massachusetts from 1965 - 68. This is my old street, Washington Avenue. See that retaining wall at the edge of the driveway on the left? I remember sitting on it eating oreos and lemonade and chattering at the moving men when they were packing us up for the move to California. 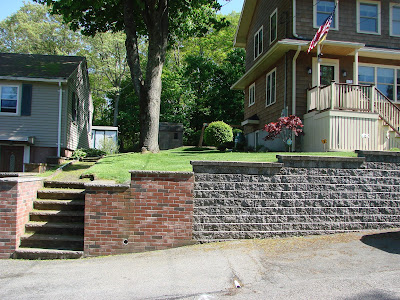 As I parked on the street, I noticed a cop pull onto the street behind me, then back up into that driveway. I thought he was turning around, but when I looked up in the midst of taking pictures, I saw that he was just parked there, watching me. Oh. So I walked over, smiling and waving and saying, "Hi there!" Who can stay stony-faced when approached like that? Not him - he smiled back and said, "Hi!" He looked like the classic Boston Irish cop, with fair hair and a roundish face. I told him I didn't mean to be acting suspiciously, but I'd lived in that house as a little girl. He said, "You lived in this house?"And told me he'd bought it in 1974. Well, no wonder he was watching me! It was a one-story house when I lived in it with my parents, older sister and younger brother. He'd added the second story. I was so young that I have only a few memories of the place - like playing in a sandbox and on a swing set with the next-door neighbor kids in that area between the two houses. 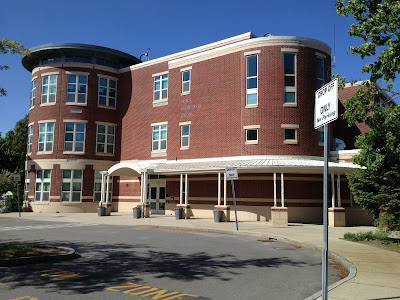 After we chatted for a bit about which neighbors from the old days still lived there, I asked him for directions to the elementary school. He said, "Peirce? Oh, you won't recognize that either - they've completely rebuilt it, it's no longer a big brick box." He was right - I sure didn't recognize it. But I think it looks pretty cool. They have a huge playground out back. I went to kindergarten at Peirce the last year we lived in Arlington. 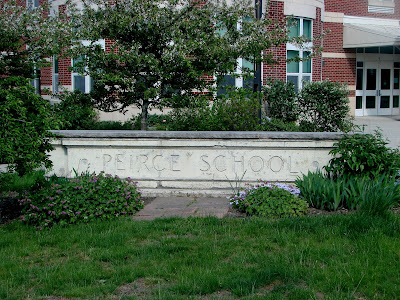 Before I left, the cop added, "They kept the old pediment and use it as the school's sign. You'll want to get a picture of that, too!" I got back in my car feeling good about the friendly conversation. 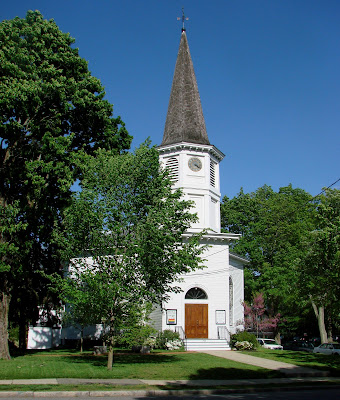 I also drove to the next town, Lexington, where we attended Follen Church, an old Unitarian Universalist church. It was built in 1840 and was radically egalitarian for the time - at the groundbreaking, the minister prayed that "this church never be desecrated by intolerance, or bigotry, or party spirit; more especially its doors might never be closed against any one, who would plead in it the cause of oppressed humanity." Ralph Waldo Emerson was one of the early ministers of the church. All I really remember as a kid in the congregation is that we used to do things like go on nature walks. 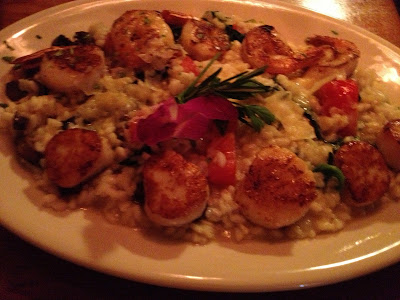 The first couple of nights I was there, we stayed in Concord and ate one dinner at a sushi place and another at a restaurant downtown where I got scallop and shrimp risotto. 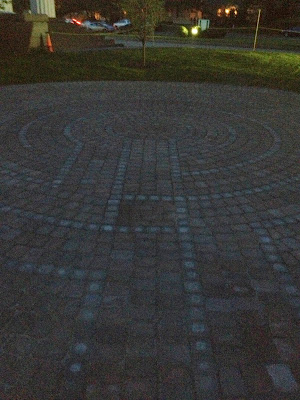 We walked around the town for a bit one night, and found this brick labyrinth. We were waiting for a table at the restaurant, but walked it in record time, in a sort of anti-mindful way (which included me yelling, "You're cheating" when my friend tried to cross directly to the center). 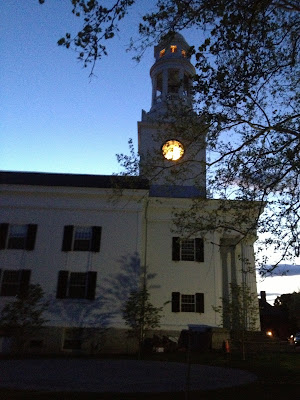 I had the first two weekdays on my own while he worked, so I made plans to do a little exploring on Friday, which I'll cover in the next post.
Posted by Secret Agent Woman at 7:35 PM