There were lots of posts on FB last night and today that amounted to "Good riddance 2016, yay 2017." And indeed, 2016 could be seen as a rough year. The election in this country was brutal, and the world saw Brexit, wide-spread terrorist attacks and general turmoil. Same as it ever was, when you think about it. In my own life, my then-fiancé had a stroke and one of my brothers died too young. But there were also things that encourage me. For instance, in spite of the lunacy of the electoral college system, it does my heart good to know Clinton won the popular vote by some 2.8 million people. It changes nothing, but somehow it helps to know many were not sucked in by Trump's message of hate. And in my own life, I had my wedding and honeymoon, my older son got accepted into his top-choice grad school, I watched my younger son fall in love with a sweet girl and set up house with her, and I added two lovely daughters to my family. The good of 2016 outweighed the bad for me. As for cheering about 2017? Well, the coming year scares me a little. Okay, a lot. I just don't know what will happen to this country after January 20th. 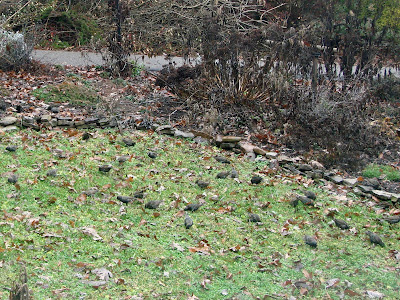 And that is why I'm trying to focus on what is good in my life. Even on this chilly, wet day, I can be aware that the drizzle is nourishing the plants in my yard and the birds (at this moment I see starlings, robins, Carolina wrens, titmice, black-capped chickadees, and mockingbirds) are having a filed day grazing for food. Last night we had our younger daughter here and we played Yahtze - I won! - and ate popcorn while we cringe-watched the bizarre non-performance by Mariah Carey on the New Year's Eve show. My husband and I are working on travel plans, we have my sister's wedding later this year, flowers will burst from the ground as spring rolls around and love surrounds me. 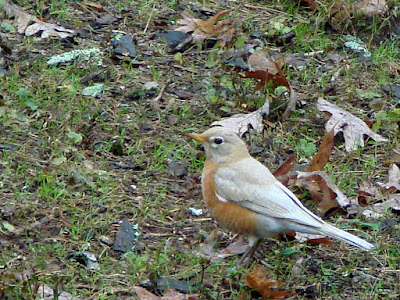 I spotted this albino (partial albinism, actually) robin in the back yard, something I've not seen before. I don't believe in omens, but I still welcome anything I can interpret as a positive sign. So thank you, pale little bird, for visiting. And thank you, blog friends, for visiting, too. A very happy New Year's to you all, and may we all have the strength and courage to face what's ahead and the ability to notice what brings us peace and joy and hope.