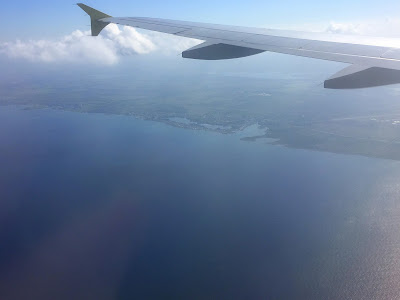 So, my husband and I were sitting around one morning talking about the death of Fidel Castro, President Obama's recent détente with Raul Castro and the possibility that Trump would either roll back the progress and make travel to Cuba illegal again or totally commercialize the place. Because, yes, that's the sort of thing we talk about while we are drinking coffee in bed.  We impulsively decided not to miss the possibly-closing window of opportunity. We got on-line and made reservations. As a cost-saving measure, we booked flights out of Atlanta and left home at 2 am last Friday to drive down. We flew into Fort Lauderdale, cleared customs, and then flew on to Havana. Because of the rarity of wifi in Cuba, we didn't find out until our last morning about the shooting at the Fort Lauderdale airport which occurred just a couple hours after we were walking through baggage claim there. The near-miss shook me, and I have grieved for the families of the victims. 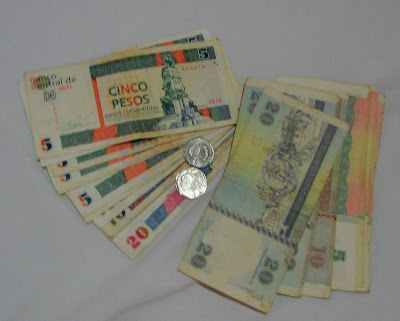 Why the Euros? Cuba levies a stiff penalty for the exchange of U.S. dollars (what with the embargo and all), so I got Euros from my bank at home and we exchanged those once we flew into Havana. Cuba has two kinds of currency. The CUC (Cuban Convertible Peso) is tied to the U.S. dollar and most purchasable goods are priced in it. The CUP (Cuban Peso) is what locals are paid in and is worth about 1/25th of the CUC. Although both are legal for anyone, most tourists deal in CUCs. 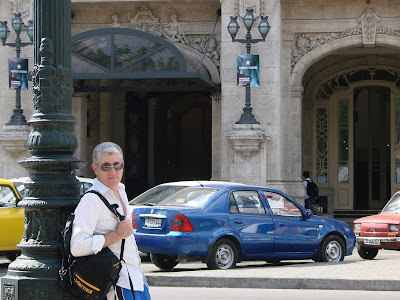 As our trip approached and the forecast shifted, we decided to check in at our place and then head directly to the beach to take advantage of the heat and clear skies on Friday. I'd read that there was a bus that ran out to Playas del Este, so we walked up to the square to catch the next one. 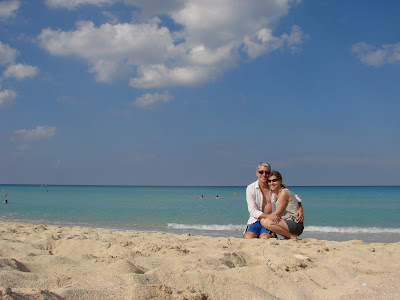 We went to Santa Maria del Mar, the closest of the beaches. I admit we were reveling in the knowledge that it was cold and snowy back home. 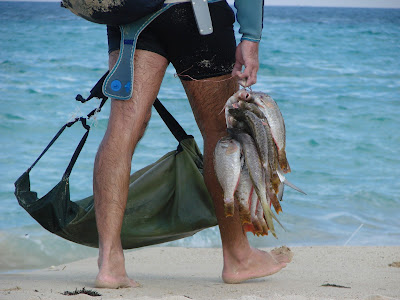 On such a gorgeous day I'd have expected a crowd, but there were a few local people fishing and a handful of tourists. The water was warm and we waded in. I collected some coral and sea glass to bring back home. 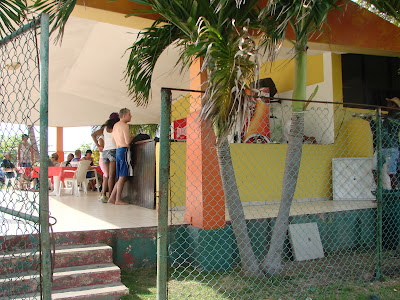 After a bit, my husband walked to the little bar and ordered a mojito. Because it seemed like the right thing to do to have a mojito on the beach in Cuba. White rum, sugar, soda water, lime juice and mint. A lot of mint. 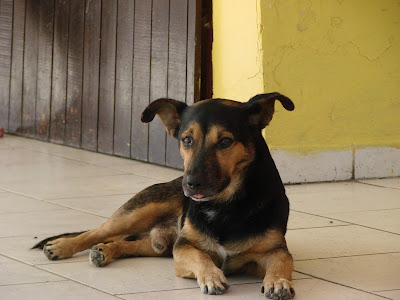 While he ordered, I walked around taking pictures. This pup lived at the beach bar, and was the first of many dogs and cats I would snap photos of. There are apparently no leash laws in Cuba. 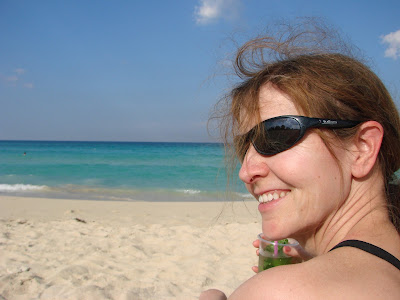 Don't let the smile fool you - it turns out, I don't actually like mojitos. It was the only one we had while we were there. 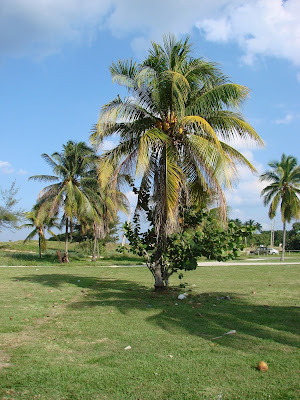 Too soon, it was time to catch the bus back into town. While my husband went back to the bar to throw away the cup, I walked out to the street past a man getting coconuts out of a tree. He held one out to me and insisted, "Para ti, para ti!" With my stunning command of Spanish, I said, "No, no... gracias, pero... what am I supposed to do with it?" 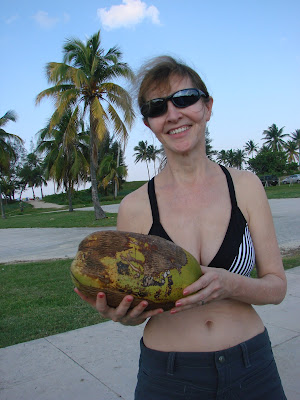 His English was no better than my Spanish, so I walked away with a coconut. After that we altered the Buena Vista Social Club song "Dos Gardenias Para Ti" to "Un Coco Para Ti." I quickly discovered that if I was on my own in public even for a couple of minutes, Cuban men went into their natural flirtation mode. 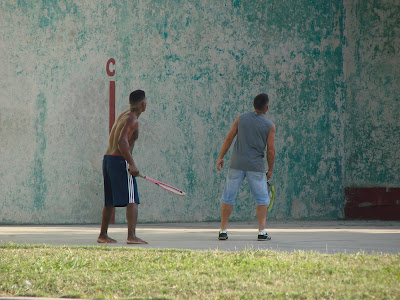 As we waited for the bus, we watched these men play racquetball on an old cement court that had a Soviet-era look to it. 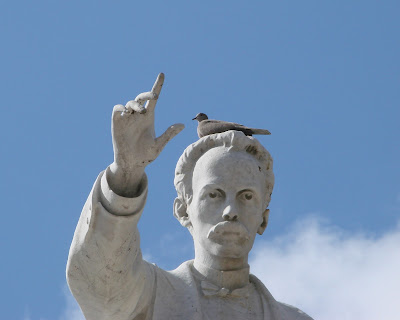 As fantastic as it felt to be on a beach in January, that's not why we were there. To travel legally in Cuba, you have to fit into one of twelve authorized categories. The category is needed to obtain a visa, and you can be fined if you fail to meet the standards. In preparation to travel under the educational category, we watched documentaries, read many books and articles, and mapped out an itinerary of architectural and cultural experiences in Havana. I knew essentially nothing about Cuba before last month and now I am pretty well versed in Cuba's history and culture. Want to know who was on the island before the Spanish arrived? Curious about Meyer Lansky and Mafia control during Batista's reign? Wondering if Catholism or Santería are tolerated in a communist country? Got a question about the Castro brothers, Che Guevara, or this guy, José Martí? Throw it at me, I'm ready.

But those are all subjects of future posts.
Posted by Secret Agent Woman at 11:47 AM