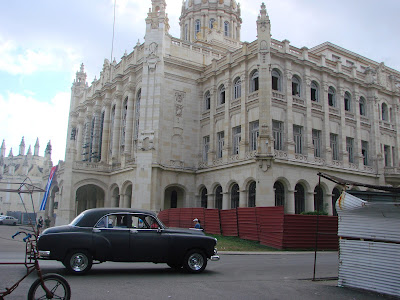 In my research prior to our trip, I decided there was one museum we absolutely could not miss. Former president Mario García Menocal who, in a display of "let them eat cake" indifference to his country's economic woes, spent nearly four million dollars of public money to have architects design and build this lavish white granite building overlooking the harbor to house the provincial government. But it was so nice that he made it his own palace instead and moved in in 1920. It remained the presidential place until Fulgencio Batista was ousted in 1959.

In 1975, the palace became the Museo de la Revolucíon. We got there shortly after it opened for the day and so avoided waiting in a long line to get in. 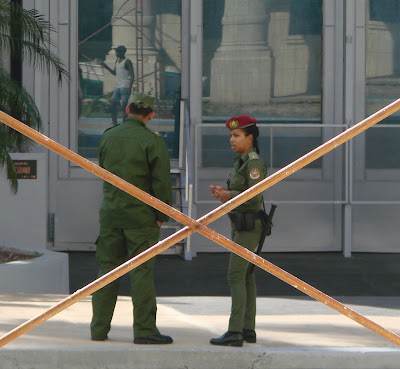 The grounds are patrolled by military officers. I read that both the military and police strongly prefer that you not point a camera at them. I would often pose my husband in front and off to the side a bit to get the photos I wanted. 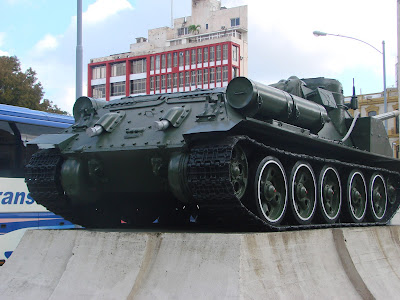 Outside there are Soviet tanks, delivery trucks and other vehicles used in the revolution, including this SAU-100 Tank that Fidel used in the Bay of Pigs in 1961. 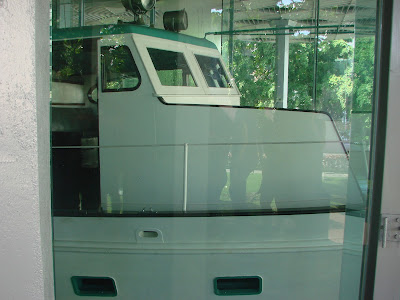 And a glass encased memorial which holds the Granma, a 59-foot boat meant to hold 12 people, with a 25-person maximum. In 1956, the Castro brothers, Che Guevara, Camilo Cienfeugas and 78 other revolutionaries sailed it from Mexico to Cuba to start the revolution. People on board got sick, the boat leaked, and the journey took so much longer than expected - 10 days - that rebel forces they'd planned to meet with on disembarking had given up and gone home. 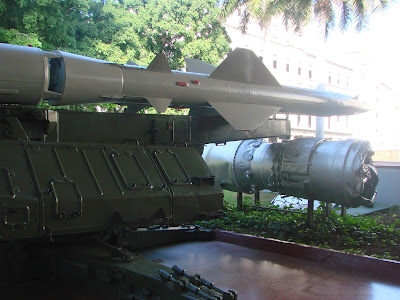 A Soviet missile and the fuselage of the American U2 spy plane shot down during the Cuban Missile Crisis in 1962 is also on display. 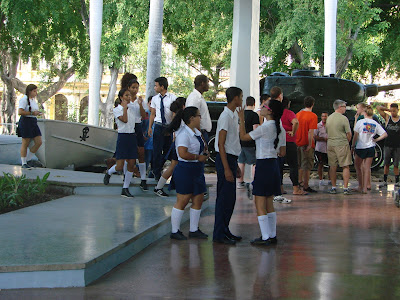 Although it was a Saturday, there were groups of school kids, in their government-issued uniforms, touring the museum. If my understanding of the uniform color-coding system is correct, these kids attend Plantation Schools. I believe that is the rural version of secondary schools, but I'm not certain. 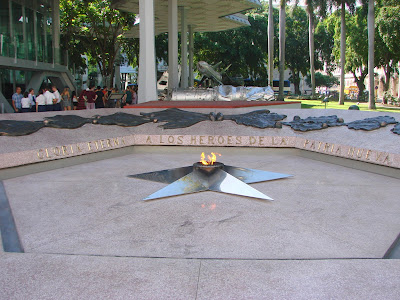 An eternal flame to fallen heroes of the revolution sits at the edge of the grounds.

I was most interested in what was inside the palace. In addition to the cost of the building itself, President Menocal had hired Louis Comfort Tiffany as the interior designer, to the tune of well over a million dollars. 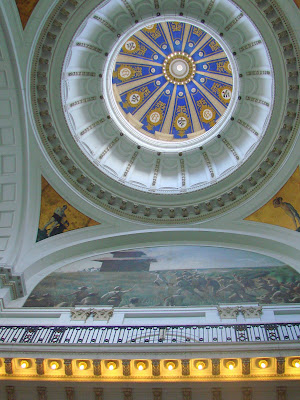 And the inside is indeed spectacular, with a view four stories up. 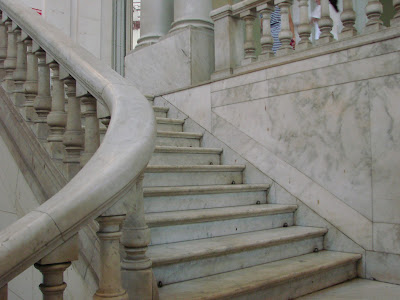 When you enter, you are immediately directed up a Carrera marble staircase. 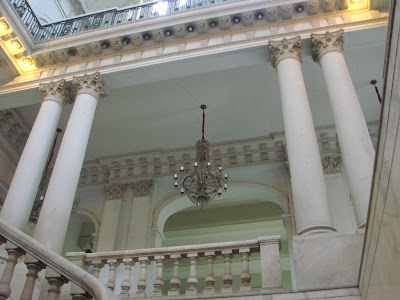 Much of the original Tiffany decorations have been removed, but there is still no shortage of ornate detail, including the chandeliers. 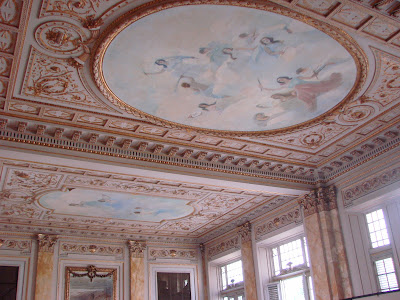 The Salón Dorado, or Golden Hall, is made of yellow marble with gold embossing. Paintings in this room are mounted on 18-carat gold sheets. 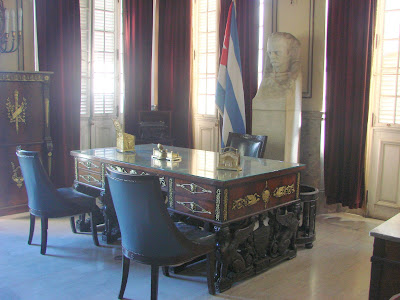 The Despacho Presidencial (Presidential Office) contains its original furniture and ornaments from the 1940's. 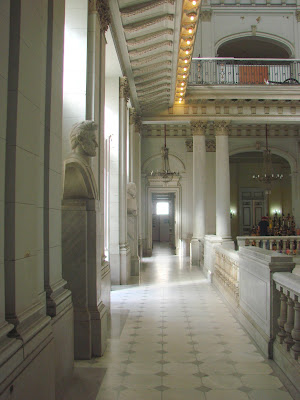 We were a little surprised to see this marble bust of Abraham Lincoln. 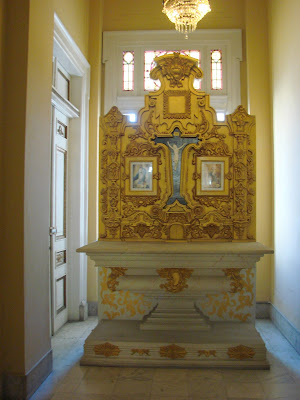 Prior to the Revolucíon, Cuba's leaders were practicing Catholics, and this marble and gold altar still sits in an alcove. 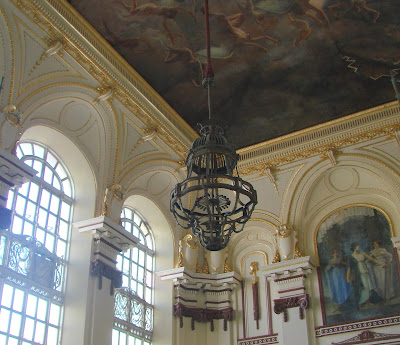 The Salón de los Espejos is an imitation of the 17th Century Hall of Mirrors commissioned by King Louis XIV at Versailles.  The room has frescoed ceilings, arched windows, and crystal Tiffany chandeliers. 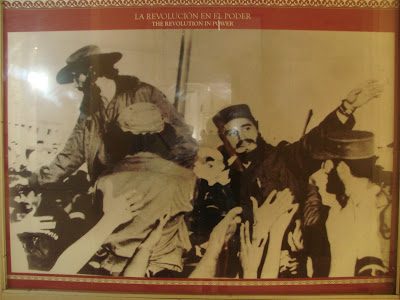 There are more than 30 rooms in the museum, most of which house over 9,000 objects from different stages of the struggle for independence. Fidel's image is everywhere. 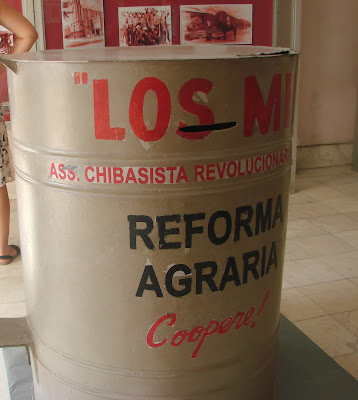 The ministry of Agrarian Reform placed this enormous metal jug in Parque Central for the citizens to place voluntary contributions. There was no indication in the signage whether the word "voluntary" was being used sarcastically. 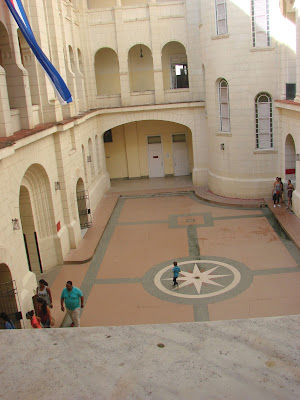 The building wraps around an interior courtyard, with a huge flag draped from one of the balconies. 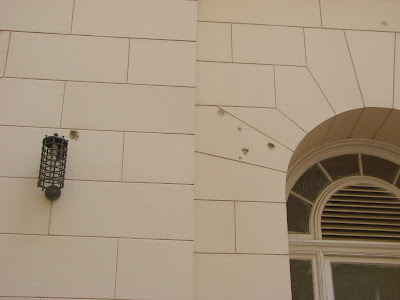 There are bullet holes in the granite and marble from the March 13, 1957 failed coup. A group of students made an attempt to assassinate Batista, but he had gone to the third floor and could not be reached. Some 40 rebels were killed by guards and police and afterwards, a wave of revenge killings of suspected revolutionaries were ordered by the regime. The dictator remained in power for another two years before he was finally overthrown. 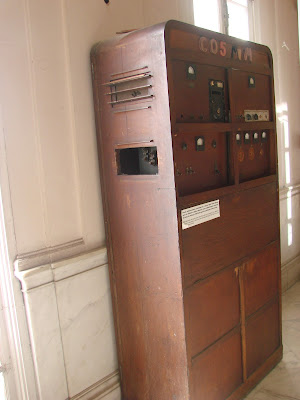 This radio transmitter was built by a radio amateur in the provinces. He built two more and delivered them to Fidel to deliver propaganda and encouragement during the revolution. 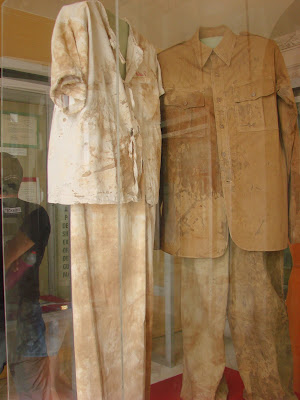 The Cubans do like their bloody memorabilia. Blood-stained clothing and gruesome photos were everywhere. I had to frequently avert my eyes. 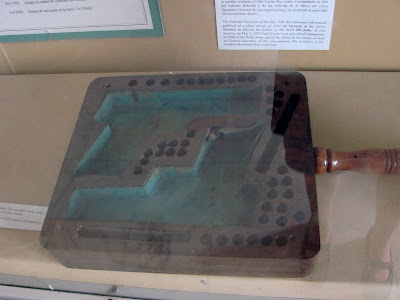 I thought this was an interesting artifact - this wooden box with a handle had carved spaces inside to fit a couple of pistols and ammo and had a lid. Apparently it escaped detection. I don't remember what it was designed to pass as, and a google search lead me on a wild goose chase which included the discovery that there are people who buy false-bottomed tissue boxes and picture frames to keep small firearms handy. 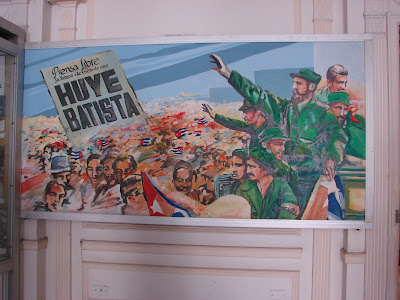 "Bastista Flees" and Fidel waves at the happy throng. Seriously, I get why they hated the guy - the ever-smiling Fulgencio Bastista at first ruled through puppet presidents and then was elected president himself, in 1940. He returned in 1952 to run again but, realizing he would not win, lead a military coup financially backed by yours truly. (Well, the US government. Not me personally.) His rule became increasingly corrupt and repressive, widening the gap between the rich and the poor. I will not draw an overt parallel about my fears for my own country, but this sort of "leader" deserves to be overthrown. 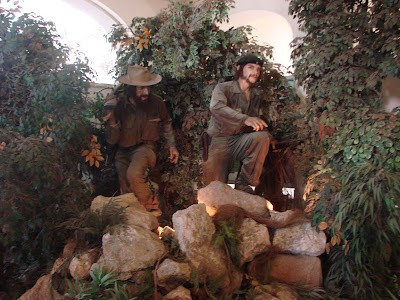 This display of a guerrilla warfare scene made me laugh out loud. It has life-sized wax figured of Che Guevara and Camilo Cienfuegos in the Sierra Maestra during the revolutionary war. I don't know why, but it immediately called to my mind the Planet of the Apes. 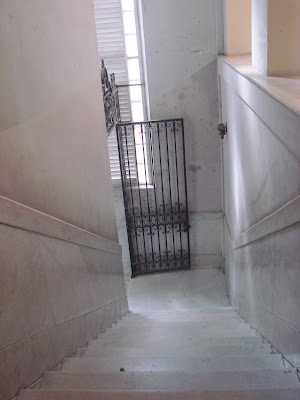 But to be honest, then main thing I wanted to see in this museum, for its pure absurdist fun, was the Rincon de los Cretinos. I couldn't remember the word for "corner" in Spanish and instead used Spantalian to ask a woman in the gift shop "Donde esta el Angolo de los Cretinos?" She was stumped at first until I wrote it down for her, then said with some amusement, "Ah! Los Cretinos!" and directed me back downstairs. 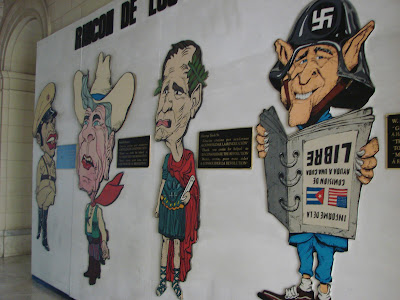 I'm guessing Trump will be added in soon. 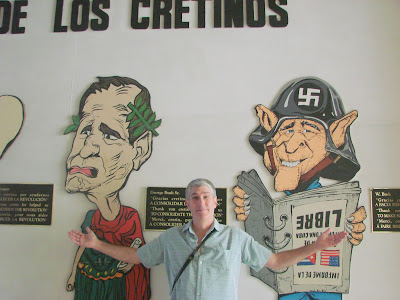 Although we felt welcomed and were treated well by the Cubans we met, it was an interesting reminder that capitalism in general and America is particular is still the official enemy.
Posted by Secret Agent Woman at 5:09 PM