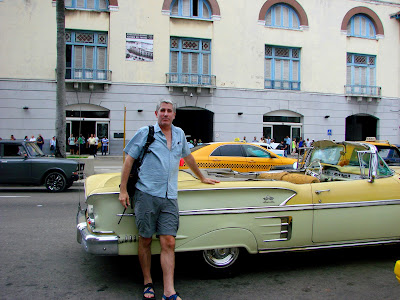 Given our very limited time in Cuba, we decided to focus our energies on two neighborhoods in Havana. Habana Vieja, the oldest part of the city, looked to be filled with interesting architecture. Naturally, we had to try one of the vintage car cabs at least once. We got a ride in this 1958 Chevy Impala convertible (the first model year they were produced). Personally, I like the more rounded cars better AND I'm not a fan of yellow. 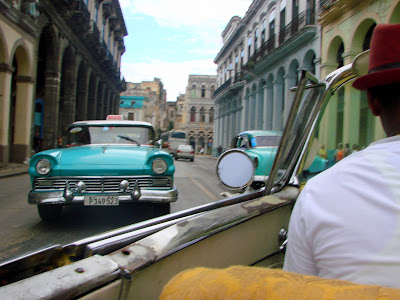 But the driver took us on a scenic route along the waterfront, radio tuned to Caribbean-style pop music, before circling back to the old city. It was sunny and breezy and the ride was just fun. 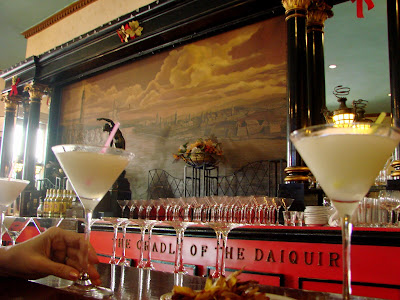 Our first stop was the legendary El Floridita bar for a daiquiri. It began as La Piña del Plata (the Silver Pineapple) in 1819. In the early 30's, the owner of the bar created the frozen daiquiri. We got there just as it opened at 11 am and were lucky to get a seat at the bar - there was soon quite a crowd, drinking and listening to live music. 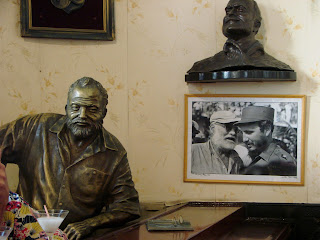 This was one of Ernest Hemingway's old stomping grounds. On his first visit to the Floridita, he tried a daiquiri and then said, "That's good, but I prefer it with less sugar and double rum." His version, which we had, was named for him and he was said to have stopped in daily for one. Or many, most like. Note the photo of Hemingway with El Líder on the wall behind the bronze statue. 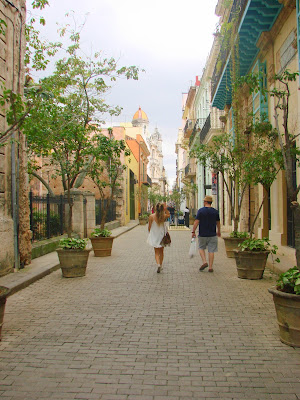 The colonial city was once encircled by a stone muralla (wall) which was demolished beginning in 1863. Everything east of where the wall used to be, and where the Prado is now, is Habana Vieja. 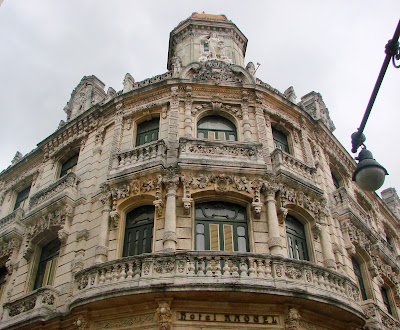 The Hotel Raquel (Hebrew for Innocent) was built near the old Jewish neighborhood in 1908. It is an odd mix - art nouveau architecture with a baroque façade. 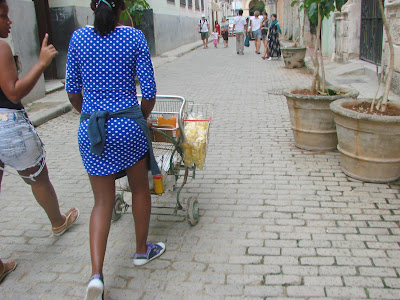 This street vender was pushing a cart filled with some sort of fried snack food down the bricked pedestrian walkway. The snacks we saw were generally either root vegetables or plantains. 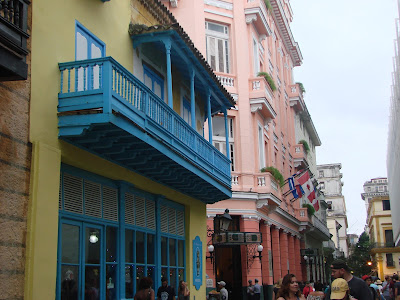 The pink Spanish Colonial building is the Hotel Ambos Mundos (Both Worlds), where Hemingway lived and wrote. Just before it is the Mercería La Muñequita Azul (Blue Doll Haberdashery). I don't think they actually make hats for blue dolls. 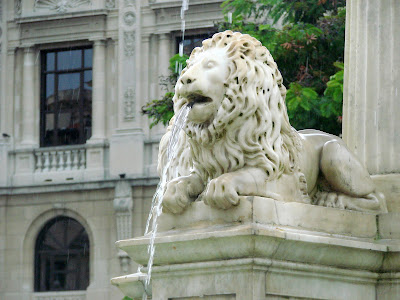 The only working water fountain we saw was in the Plaza de San Francisco de Asís. In the center of the square was the white marble Fuentes de los Leones, carved by an Italian sculptor Gaggini in 1836, with a circle of lions endlessly spitting water. The plaza faces the harbor and was a stop in the 16th century for Spanish galleons enroute from the Indies, and a site of the slave trade. It used to be an inlet until the land was drained and the square built in 1575. It was the original site of the marketplace, but after wealthy people built their houses on the plaza in the 17th and 18th centuries. The noisy market, which included cockfights and public executions, was moved to the older Colonial square, Plaza Vieja, after complaints made by the home owners and the monks. 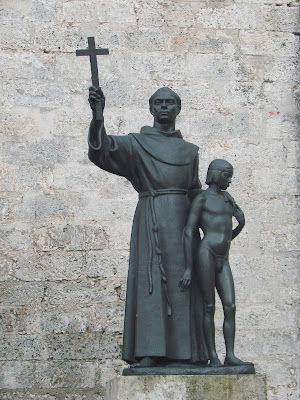 I assumed this was St. Frances, but  I discovered that there had been a statue of St. Franicis atop a belltower. It was destroyed in a cyclone in 1846. Instead, this is a Spanish friar, Junípero Serra.  The boy with him is of the Juaneño tribe, an indigenous people enslaved by the Spaniards. Makes the statue seem pretty sinister, right? But wait, there's more. Fray Serra was an Inquisitor who made accusations of devil worship and witchcraft. And he was into mortification of the flesh. He wore garments woven with bristles and wire under his robes, seared himself with candles, and beat himself every night and publicly during sermons with chains and rocks. A real nutjob, not to put too fine a point on it. 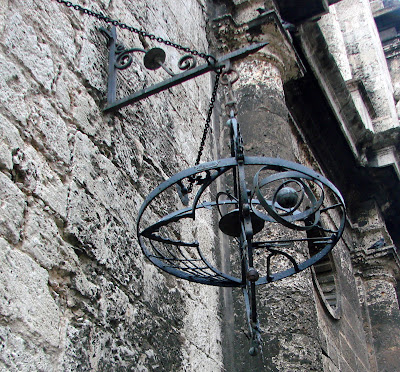 The Basilica Menor de San Francisco Asís was built in 1608. It served as both church and Franciscan monastery and was remodeled in a baroque style in 1730. I have absolutely no idea what the metal thing is. It looks astronomical to me. 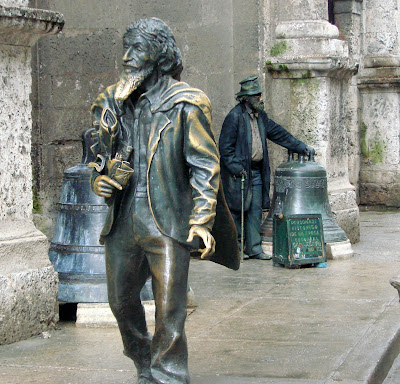 At first, I thought there were two bronze statues in front of the church. The one in front is El Caballero de París, a steet person in the 1950's who loved to get into conversations with strangers. His beard is shiny because people rub it for luck. Turns out, the one in back was a street performer dressed to look like a metal statue. I'm guessing no one messes with his beard. 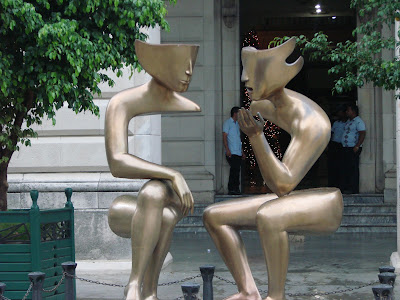 Also in the Plaza San Francisco is the contemporary bronze sculpture, ‘La Conversación’ by French artist Etienne. It represents the need for dialogue in contemporary society. 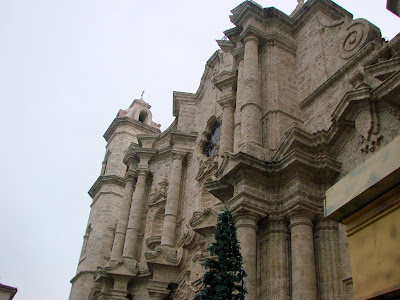 In the Plaza de la Catedral is the beautiful La Catedral de la Virgen María de la Concepción Immaculada de La Habana. Because why settle for a succinct church name? It's a mix of Baroque and Tuscan styles. Every time I encounter the word Tuscan, I go into a bit of a reverie about my honeymoon. Anyway... it is made from blocks of coral! And the bells have gold and silver mixed into the bronze. It was built between 1748 and 1777. 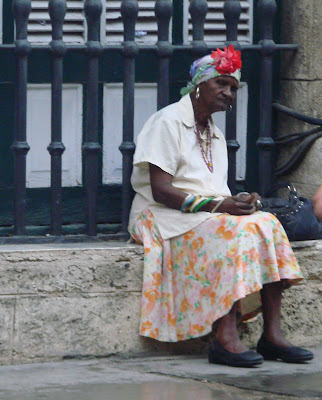 I believe my photo may not have been appreciated by the subject. But had I spoken better Spanish, I bet she'd have had an interesting story to tell - she's seen incredible changes in Cuba in her lifetime. 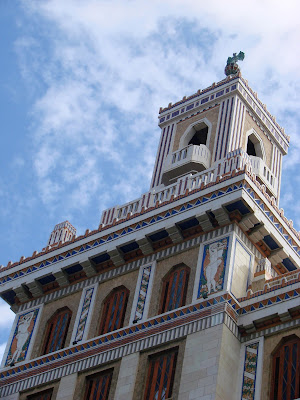 In the Las Murallas district, we saw the Edificio Bacardi, designed in 1930 by Cuban architects Castells, Ruenes and Menendez. The façade is granite imported from Bavaria and Norway, colored brick, terracotta and Capellania stone. The best part is the bat on the top of the building, which is the logo of the Bacardi company. We had only Havana Club rum while we were there, and brought back a bottle of their 7 Años. 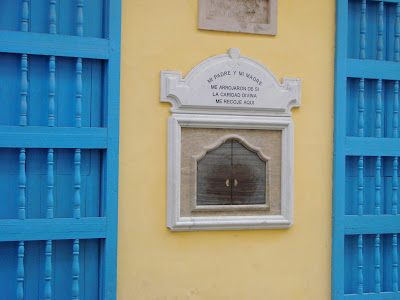 The plaque says "Mi padre y mi madre me arrojaron de si la caridad divina me recoje acqui."  If I'm understanding it correctly, it is saying my father and mother threw me away and divine chairty picked me up here. Something like that. It leads me to believe it was an orphanage. 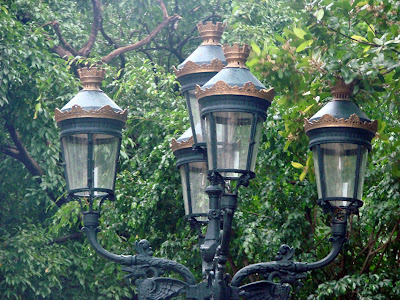 We also visited the Plaza de Armas - the Square of Arms - which was a military parade ground for Spanish soldiers. 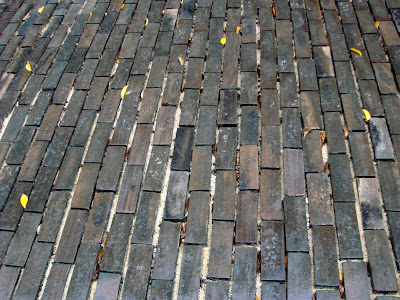 This is the only place I've ever seen that had wooden bricks as pavers. I don't know how they keep them from rotting out, but they were beautiful. 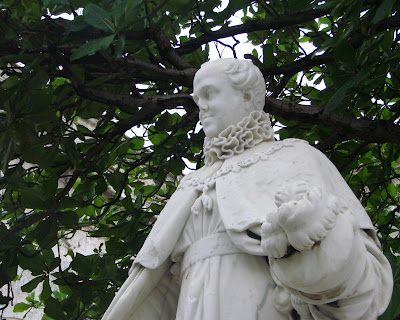 Fernando VII, Rey de España. This cararra marble statue was by a Roman sculptor in 1833, the year of King Ferdinand's death. You have to love that ruffly collar he's sporting. 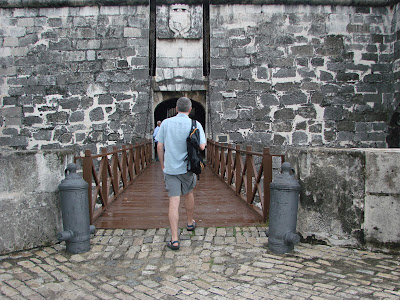 Castillo de la Real Fierza, the second oldest fortress built by the Spaniards in the West Indies. This 16th century fort was designed to defend against pirates, but was too far inside the bay to be useful for that purpose. To get to it, you cross a moat using the drawbridge. I've always wanted a little moat around my house. Maybe stocked with piranhas, since alligators tend to wander. Do you think there are city ordinances against piranha-filled moats? 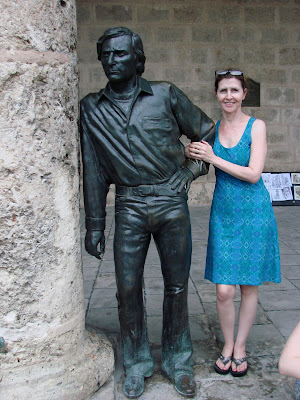 I do not remember the name of this guy, but we hung out for a bit. He didn't have a lot to say for himself. Kind of stand-offish, really. 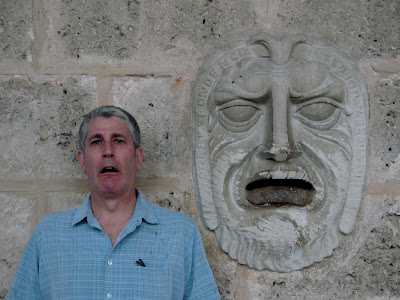 Okay, I admit - sometimes we can be real tourists when it comes to photo ops. 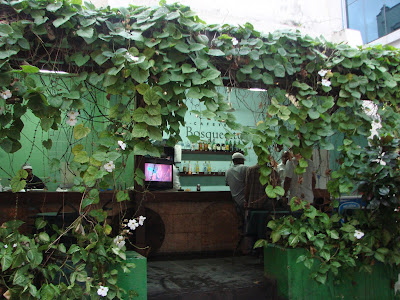 As the afternoon was wrapping up, we ducked into this little arbored bar, El Bosquecito (little grove). When we sat down, the bartender turned to his two friends and said quietly, "Italiano o francés?" Nope, neither. And we also didn't order mojitos like the other folks who came in. Just "ron oscuro, sin hielo" - a glass of dark rum for each of us, neat. 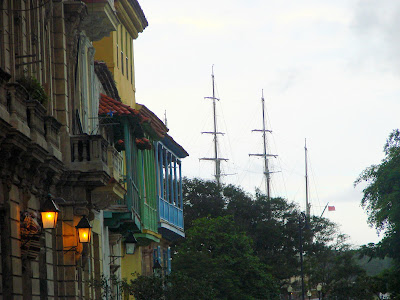 Walking back toward Habana Centro, we saw a ship with several masts sailing by on the harbor ahead. It felt like we'd been cast back in time.
Posted by Secret Agent Woman at 5:44 PM