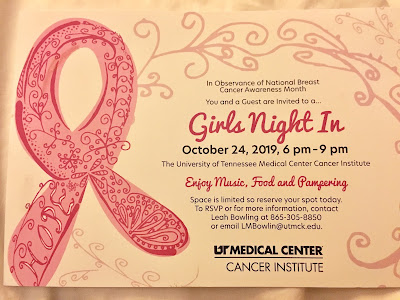 Pink is everywhere right now. October is Breast Cancer Awareness month and that means a lot of corporations profiting off this disease. Pink ribbons on cosmetics, on yogurt, on spatulas, on every sort of merchandise imaginable. Company after company promising money to raise awareness and find a cure. And yet, a tiny fraction of that promised money (and sometimes, none of it at all), actually goes toward research aimed at making treatment more effective and, most importantly, finding a cure. Don't even get me started on the Susan G. Komen foundation which manages to pay big fat salaries but gives only 20% of donated money to research. Breast Cancer Awareness month feels like such a sham that I avoid most things associated with it. So I was torn when I got this invitation. 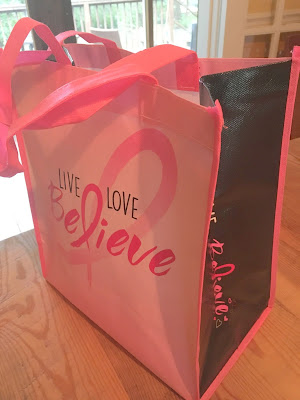 Ultimately, I decided it would be a nice way to spend time with a friend who is a fellow breast cancer survivor. Although, I hate that word, too. At any rate, a mutual friend got us together when I had to make a decision about chemo. She met with me for lunch to answer the questions that the first oncologist had little patience for, and then was there for me as a support. She even took me to get my port implanted, bringing me a box of tegaderm and telling me how to use it with EMLA cream to make accessing my port more tolerable. She waited for me through my surgery, dressed me when I woke up from the anesthesia, and sat with me at home for a while. She and the mutual friend also visited me at the infusion center when I was getting my first round of chemo. I invited her to join me for the event. 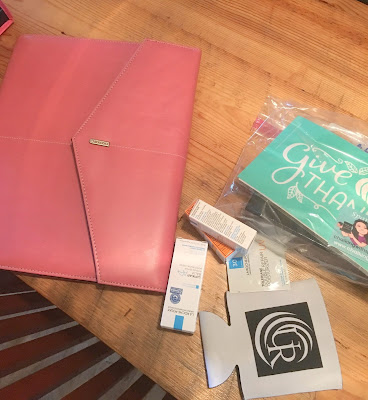 We were given bags with some goodies. Inside was a silly gift (a radiology department coozie) and a nice gift (a leather folding binder with a notepad inside). There was pretty good food but a sad lack of wine, and activities. I actually picked up an offered craft kit, remembered later that I just don't do crafts, and now it's in the Goodwill pile. As we were eating, I saw my breast surgeon and she came over to give me a hug. I adore that woman. But it was a little surreal being at a festive event in a setting rife with traumatic memories. We ate in the waiting room of the cancer center while a remarkably old woman played jazzy tunes on the piano. There were beauty school students giving manicures at the booths where you check in for procedures. They handed out moisturizer samples and offered chair massages in the halls of the place where I had mammograms and my biopsies. Incidentally, there were three massage chairs and the third woman getting a massage while we were there responded to her massage therapist's compliment on her hair by saying, "That's one reason I was thankful not to have to do chemo! I told my daughter we could go to Party City and buy some fun, colorful wigs and she was actually disappointed when I didn't have to have chemo! Ha ha ha!" Yeah, ha ha ha. I bit my lip to keep from saying, "There's nothing fucking fun about chemo or losing your hair." 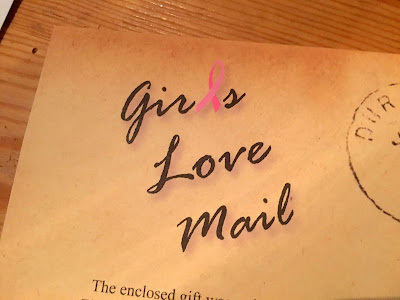 But you know, there's a general air of whimsy around breast cancer awareness. And a fair degree of infantilization. "Girl" is consistently used instead of "woman." At events you see lots of pink boas and tutus because woohoo breast cancer! Just a brief but still happy inconvenience that we strong warrior women laugh our way through!! Well, no. Try that approach with the families of the 42,000 woman who will die from it this year just in this country and see how receptive they are to the hilarity. 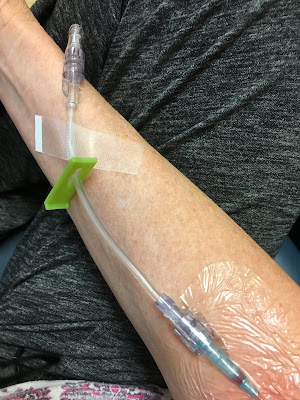 Because with any invasive breast cancer, no matter the stage, it doesn't end. Just last month, I had pain that didn't seem to be healing in my tailbone and rib cage. My oncologist ordered a nuclear medicine bone scan, which didn't show any current metastases in my bones. But there was a suspicious finding in the area of my skull behind my ear. I got a call from the oncologist's office as I was in the airport headed for Iceland to schedule a brain CT as soon as I got back. That, too, thankfully, was negative. But here's what I know: A large percentage of people with breast cancer have a recurrence at some point. And some 25-40% (depending on which study you're looking at) of women with breast cancer already have cancer cells in their bone marrow by the time they have their surgery. They just don't know it yet - cancer cells can lie dormant for years and women with my type of breast cancer can develop metasteses as late as twenty years out. And for women and men with invasive breast cancer, there is no known cure. If you become metastatic, all they can do is try different treatments until they stop working and you die. There is just nothing cute or sexy or uplifting about breast cancer. The rates are rising, it’s hitting women at an increasingly young age, and women and men are dying from it at an alarming rate. So I’m here to tell you that if anyone goes all “Save the Tatas” on me, I may well punch them in the throat. 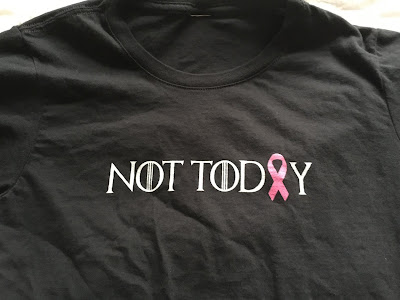 I'm not actually bitter about my cancer as long as people aren't expecting me to be jolly about it. I'm a realist but not a pessimist, and I love my life. What that leaves me with is always reminding myself to live as fully and fiercely as possible right up until I die. That is why, in spite of my general dislike of Pinktober and all the pink ribbon bullshit, I was unable to resist this shirt. It’s a Game of Thrones reference (and I know I am one of the few people who never watched that show) where the sword teacher tells the girl, “There is only one god and his name is Death, and there is only one thing we say to Death: ‘Not today.’”
Posted by Secret Agent Woman at 1:58 PM