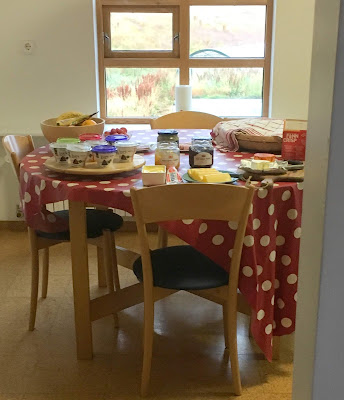 Breakfast was included at this airbnb. Skyr (the Icelandic yogurt), breads, fruit, smoked salmon, coffee and juice. Our breakfast companions at the dining room table were a young German couple and a family (a woman from New Jersey, her husband from the Czech Republic, and their daughter). When I took a container of skyr, our host Árni poured cream over it for me, telling me that Icelanders consider the yogurt-like food to be too dry without it. To me, it made it much too rich. 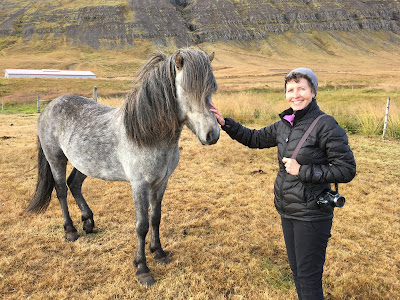 We decided to walk down to the shore before we headed off to explore more of the Westfjords. This took us through a pasture with friendly horses. This one approached me, 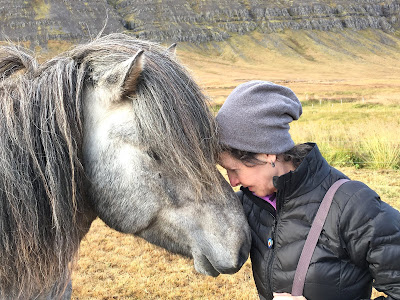 and then leaned her head in to mine. So sweet. 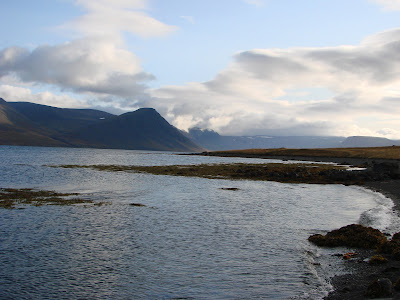 We wanted to see the seals so we walked down to the water. 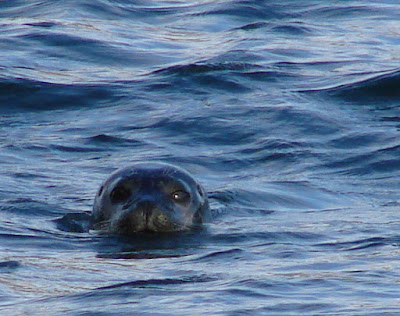 They did not disappoint. Seals are as curious as the horses, and kept bobbing up to have a look at us. 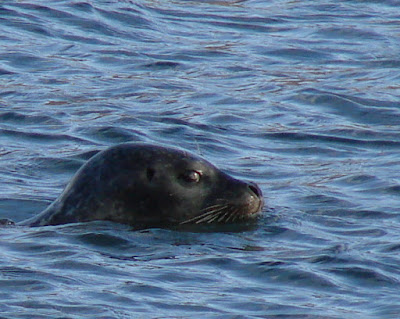 I mean really, how cute is that? 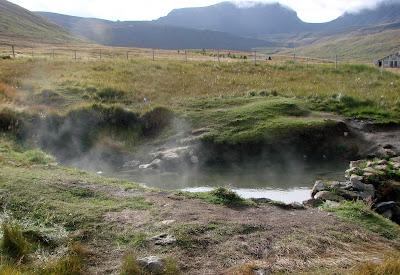 We drove that morning to Reykjafjörður, to the Reykjafjarðarlaug natural hot spring.  But it was nearly scalding. We dipped our feet in and thought better of parboiling ourselves. 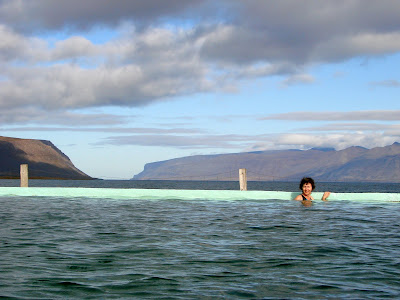 Fortunately, this geothermal spring is also piped into a pool, which overlooks the fjord. There was one other person in it, who got out after a bit, leaving it to just us. 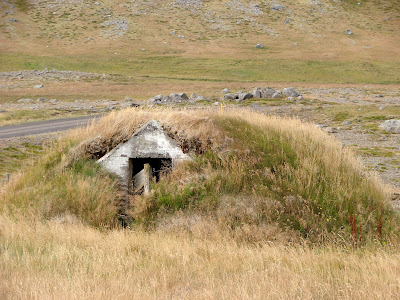 Nearby was an old turf house, gradually rejoining the earth. 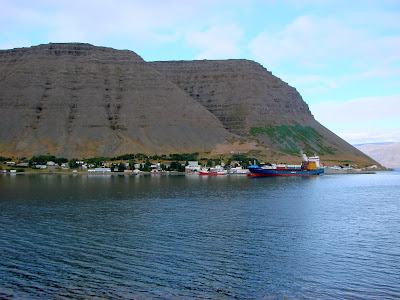 After the pool, we drove to Bíldudalur on the Tálknafjörður fjord. 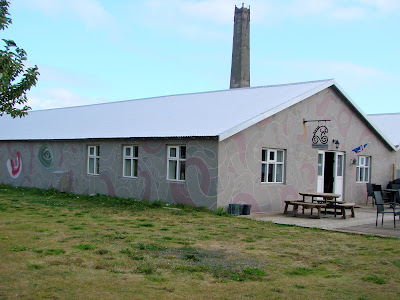 The town boasts of the Icelandic Sea Monster Museum. "First-hand accounts from eye-witnesses are joined on-screen by academic theories on the nature of sea monsters, while a variety of relics and artefacts relating to this mysterious branch of zoology appear throughout the museum as tangible evidence for their existence." In other words, it's a crock of shit. Still, I thought it might be entertaining, but when my husband checked the price it was $11 each and we passed. Our host, Árni, told us later that virtually every little town has a museum about something and they're designed to get tourist dollars. Once you've paid, who cares if you're disappointed? He said there was even a town with a pirate museum, "and there have never been pirates here!" He seemed to find tourist gullibility wildly amusing. Which is fair. 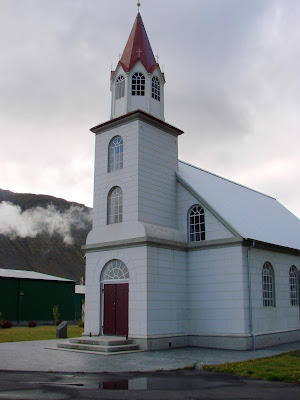 Bíldudalur is in the municipality of Vesturbyggð. Try pronouncing that one! Side note about Icelandic churches - the Lutheran ministers are civil servants and the church buildings are used for weddings, funerals, confirmations, and so on. But going to church on Sundays really isn't a thing there. 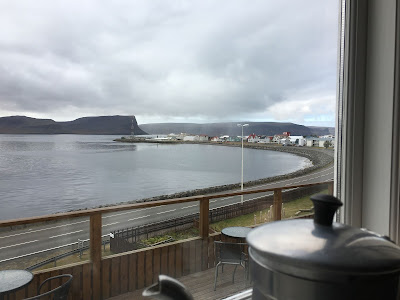 We drove over to Patreksfjörður on the other side of the Tálknafjörður fjord. We had a late lunch at Stúkuhúsið cafe, in the center of town. 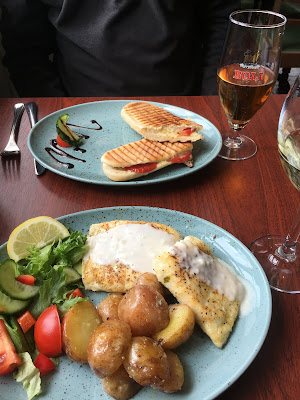 We had a tomato and mozzarella panini and the day's special: pan-fried halibut with potatoes and salad. Both very good. 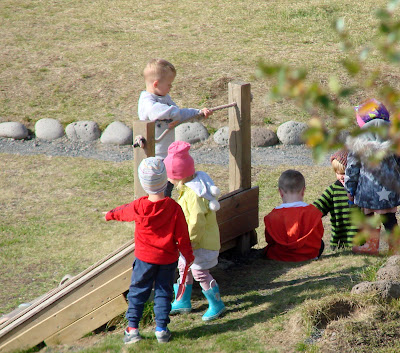 Patreksfjörður has about 680 residents, compared to Bíldudalur's 200, so there was a little more going on there. School was in session and we watched these kids in the playground. 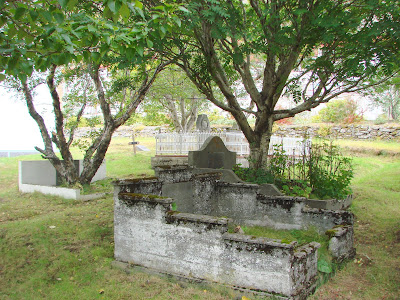 The church graveyard looked intriguing so we went in to investigate. Many of the enclosed graves had trees planted right in the center of them. 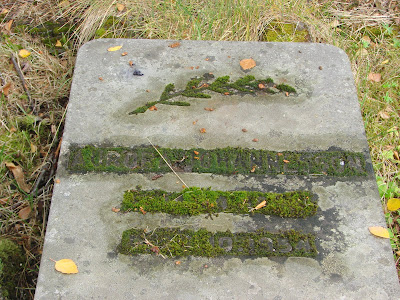 While we were looking around at the graves, some kids in the school next to the church leaned on the fence and started shouting to us. It was in Icelandic, but I'm pretty sure it was "Hey! What the hell are you doing?!" 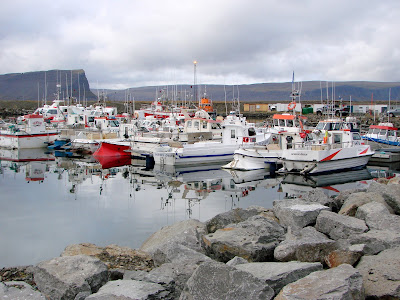 Trawling fishing began in Iceland in this town, and Patreksfjörður still has a big fishing industry. We spent a little time walking on the docks and looking at the fishing boats. 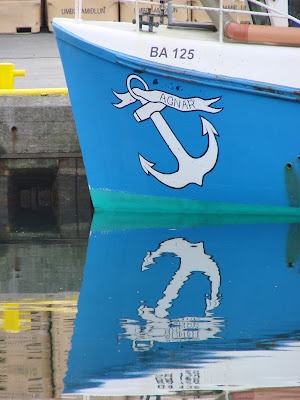 I liked the clear reflection of the anchor on the prow of the Agnar. 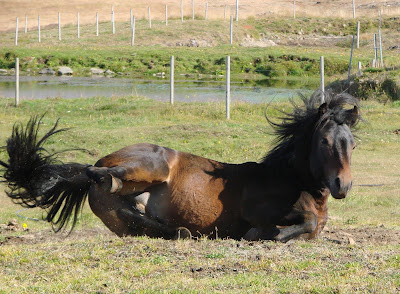 And then, back to Laugaból farm, where the horses were enjoying the sun. 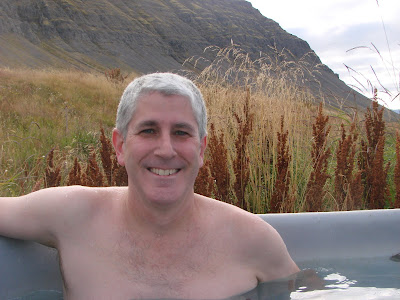 It probably goes without saying that there was a geothermal hot tub at the farm and that we took advantage of it. 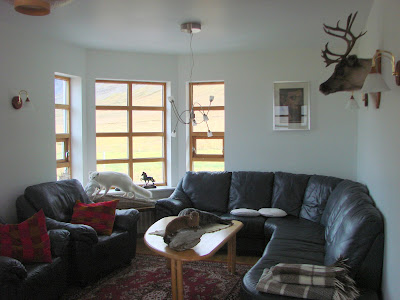 Icelanders like their dead animal decorations. In the dining room there was a brown version of an arctic fox (with a brown bird in it's teeth), and I asked Árni where María stayed when she wasn't on a lead outside. When he told me she mostly lived in the barn, I jerked my thumb at the taxidermied fox behind me and said, "So she doesn't know about THIS guy?" He laughed and said, "No!" 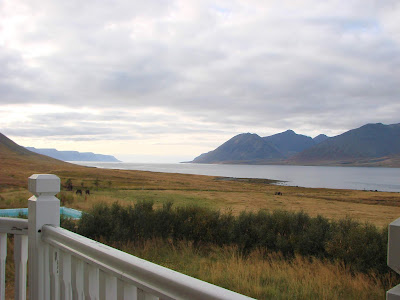 In the early evening, after our soak in the pool, we took the binoculars and sat on the deck watching the whales who had moved further into the fjord. Once a whale even breached in front of us. As we sat eating cheese and crackers, drinking wine, and whale-watching, Árni came out with two warmed-up woolen blankets and wrapped them around our shoulders. Truly, does life get any better than that? 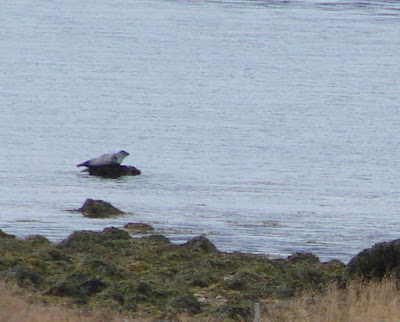 As the temperature continued to drop and the whales moved away, we said goodbye to the fat seals on the rocks below us and went inside. 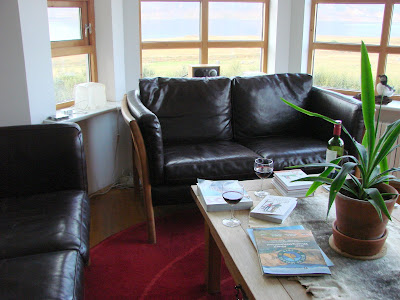 I could happily have stayed at Laugaból all summer.
Posted by Secret Agent Woman at 8:07 PM