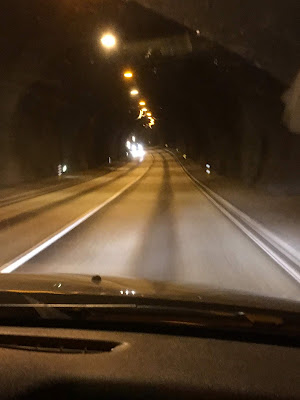 After a wonderful breakfast at the Hótel Flókulunder the next morning, we finally made our way out of the Westfjords. As we headed south, we went through one of Iceland's many tunnels. The Hvalfjörður Tunnel goes under a fjord, 541 below sea level at its deepest point. It is a little over 3½ miles long and it felt like we were in it for a long time. 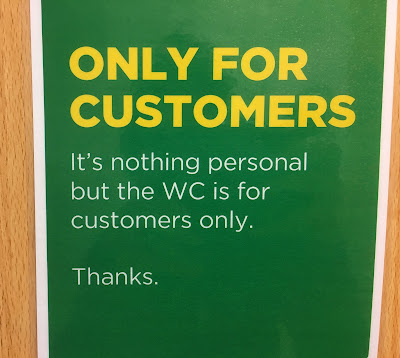 When we stopped at a gas station to refuel, we also picked up some coffee and a sandwich. Kjúklinger og egg (chicken and egg, a combo that doesn't bear thinking about too closely). Not only do they have great coffee, Icelandic gas stations also carry surprisingly good sandwiches. But their politely-worded customers-only bathroom sign made me laugh. The sign is only in English so it is obviously aimed at free-loading tourists. 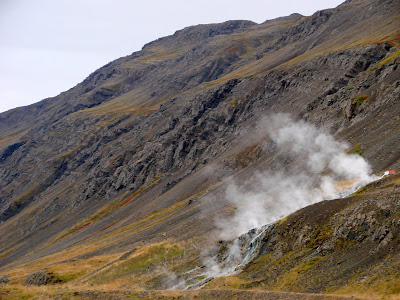 Short a day now on our itinerary, we decided to make some stops along the way to our next lodging. We drove first to a geothermal spring, but were aghast at the number of cars and tour buses in the parking lot, and just kept driving. We'd been spoiled by the relative isolation of springs further north and were getting our first taste of how heavily touristed the south of Iceland is. 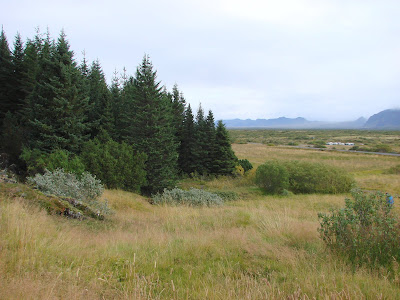 Tourists or no, however, I was determined to visit Þingvellir National Park. Þingvellir is in a rift valley, where the American and Eurasion tectonic plates are slowly pulling apart. (Incidentally, I've also been to the only other place on earth where this pulling apart of two tectonic plates can be seen - the Great Rift Valley in Africa.) 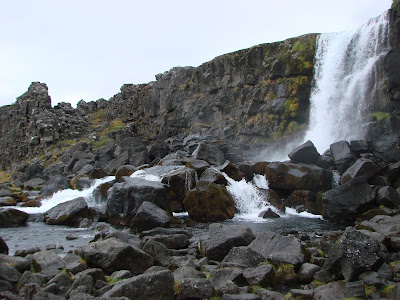 But in spite of the geological significance, I was most interested in the history of Þingvellir. It's the site of the Alþingi! In 980, Vikings decided to form a centralized government and chose Þingvellir as a yearly assembly. It was Europe's first parliament. At the time it was held outdoors, during the summer. 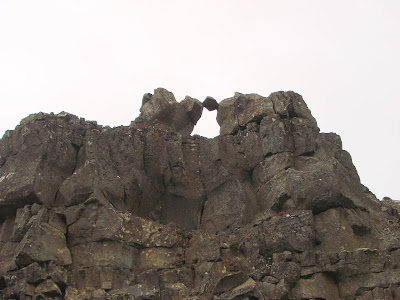 Within the þinghelgi, or parliamentary site, anyone in attendance was immune from vengeance. The goðar, or cheiftans, came with the Vikings loyal to them, and occupied shelters or turf booths at the þinghelgi. People came to trade, tell stories, have feasts, and share the news from the different regions. 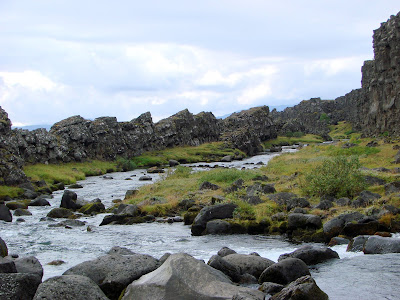 The primary purpose of the Alþingi was as a legal gathering.  Each year the lawspeaker would recite, from memory, a third of the law (covering all of it over his three-year term). Anything left out, if not noticed, was excised from the law. Cases were presented and judgments passed. And, it being a Viking assembly, judgment could be harsh. The guilty might be fined or even banished from Iceland. But some were also put to death, the men generally by beheading, the women by drowning. Records show that 18 women were put to death at Drekkingarhylur, the Drowning Pool, at the right of the photo. 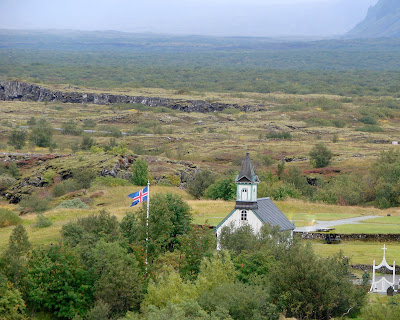 The first church at Þingvellir was built at the behest of Olaf, the King of Norway, when the Vikings adopted Christianity around 1000 AD. The present church, here, was built in 1859. 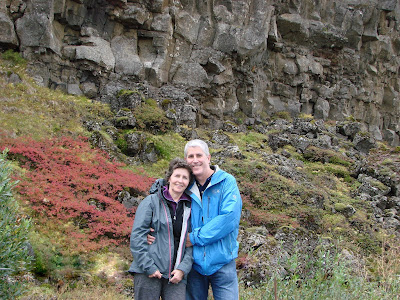 It was a slightly chilly and overcast day, but it was fascinating to walk though Þingvellir. (Þingvellir, as close as I can discern, is pronounced THINGvetlirsh. The rsh is a sibilant rolled r.) 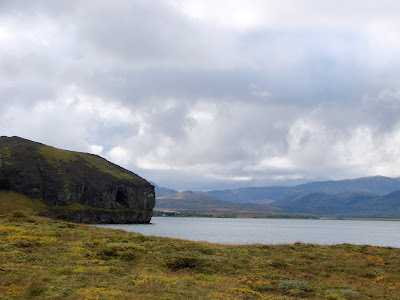 We drove out along the shores of the lake Þingvallavatn and headed on south. 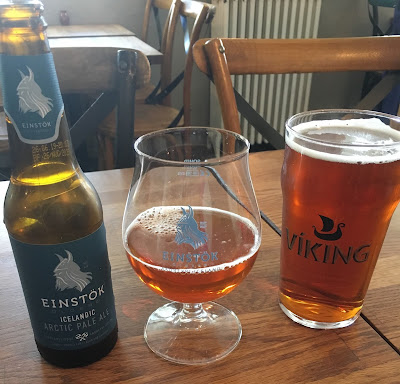 We stopped in at a little pub in Hveragerði for a beer. The Einstök Icelandic pale ale was my favorite of all the beers we tried. Einstök means one of a kind, or unique. We also had a Víking ale. 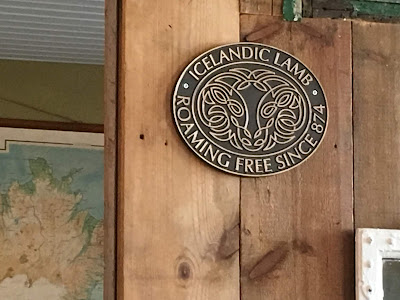 We don't eat mammal so we didn't have any lamb, but it does seem to me to be a vastly preferable system to get meat from free-roaming animals rather than ones who live horrific lives on big commercial feedlots. 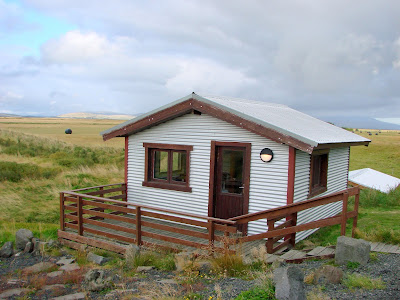 Then on to our next place, a traditional Icelandic cottage on the Vestra-Fiflholt farm near Hvolsvöllur. 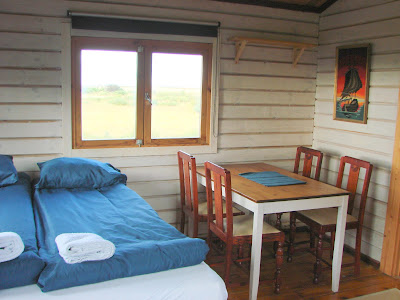 It was cute and cozy inside and had a view of the farm and the volcanoes Hekla and Eyjafjallajökull. 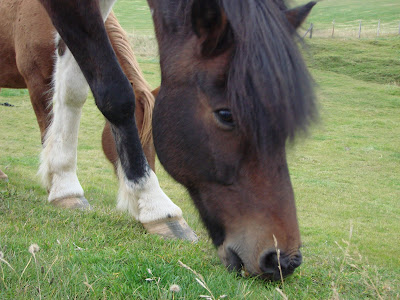 These Icelandic horses came up to say hello, but weren't as affectionate as the ones at Laugaból. Beautiful creatures, though. 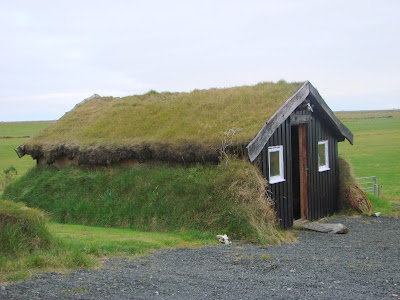 Next to our cottage was a house with a turf roof and turf blocks insulating the sides. I'd love to have grass and mosses growing on my roof. 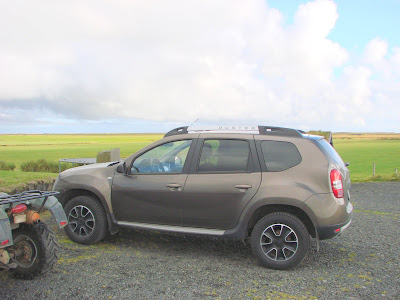 This was our replacement car, a Dacia Duster (thanks, Nick, for identifying it for me - Dacia is a Romanian company and not one we get in the States). I hadn't realized how rattly our little Jimny was until we drove this newer car. 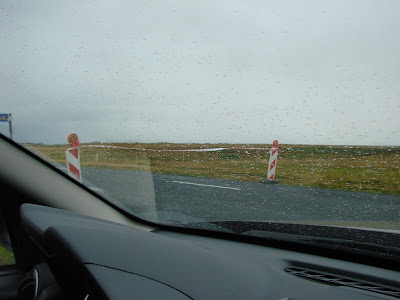 We decided to drive out for dinner but ran into a little snag. The road was closed! No warnings, no signage about how to detour. Fortunately we had a good road map, but it still took some exploring to get back on our way. 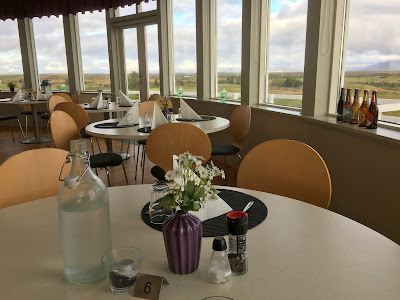 Finally we made it to the Strönd Restaurant in Hella. 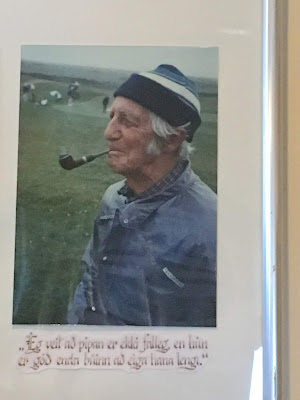 It's the top floor of a golf club and the walls in the stairwell are decorated with old photos of golfers, including this pipe-smoking fellow. 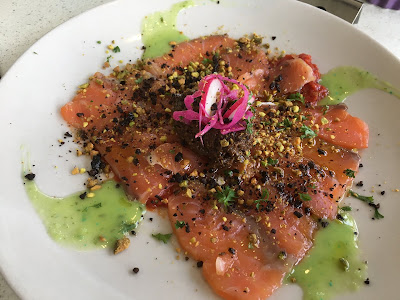 We had salmon carpaccio to start and then local trout and vegetables as a main course. 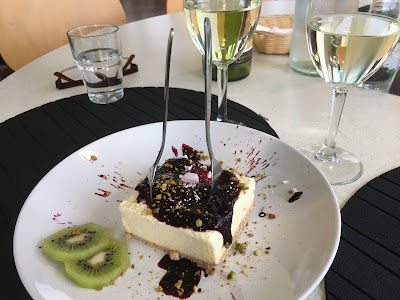 Then the only dessert we ordered on the whole trip, a cheesecake with a sauce made of mountain blueberries. Delicious. 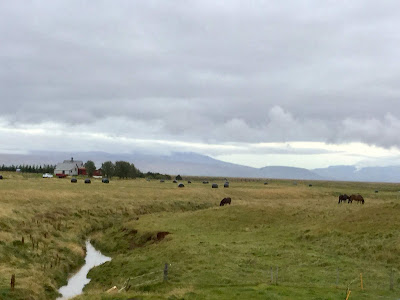 Then back to Vestra-Fiflholt for the night. Eyjafjallajökull, by the way, is the volcano that errupted in 2010 and produced an ash cloud that shut down European air space. The name literally means Island Mountain Glacier. I listened and practiced and listened and practiced until I could do a pretty fair job of pronouncing Eyjafjallajökull - AYyah-FYAHTlah-YUHkutl. Except that tl is sort of spit out the side of your mouth. It's a fun word to say.
Posted by Secret Agent Woman at 8:04 AM