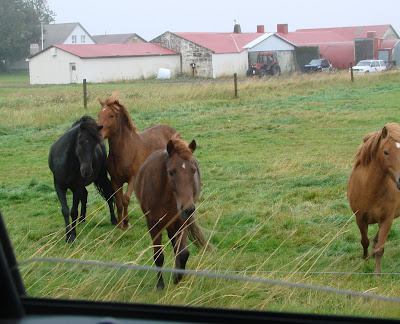 We left Vestra-Fiflholt farm in the morning, with a goodbye from the friendly horses. 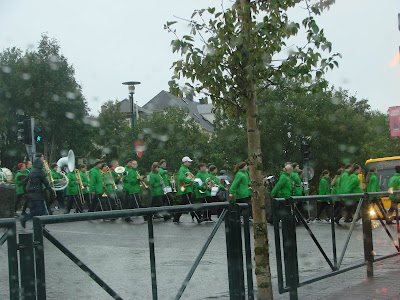 When we got into Reykjavík, we had to stop for a bit to let the marching band pass. 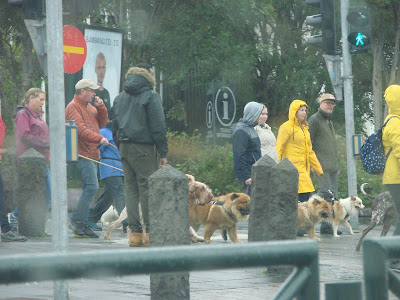 Then a dog parade! I was already liking this city. 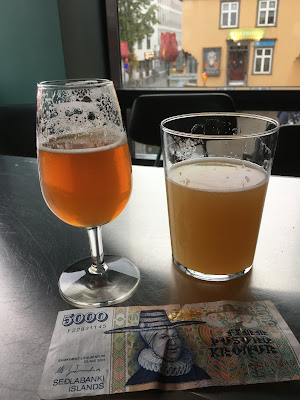 I liked it even more when I found a 5000 krona note on the floor of the parking garage. That's about 40 bucks. We headed straight for Frederiksen's Ale House on Hafnarstræti for a couple of beers. 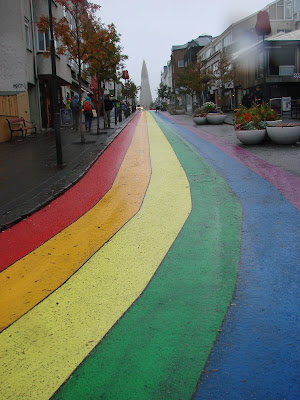 Skólavörðustígur street has been painted with a rainbow in honor of their annual Pride festival. I wish I'd gotten some photos of the many Japanese tourists pausing to vamp in front of a camera on this street. 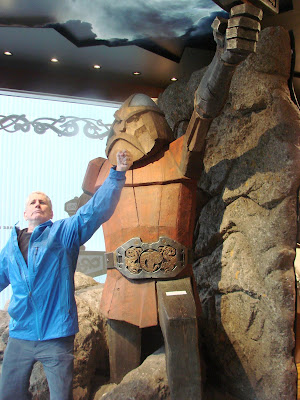 Of course, we're no better. My obliging husband will recreate any statue I ask him to. Here he taps into his Norse heritage to be a Viking. 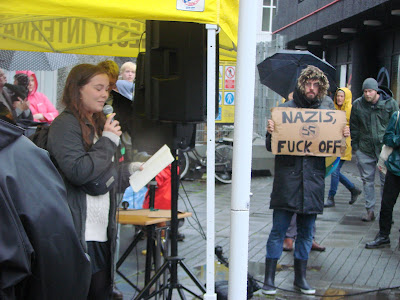 We saw a crowd gathering and went to investigate. It was an anti-white supremacy demonstration, and although we couldn't understand the Icelandic speech, the sign was sure universal. We stayed for a while in solidarity. 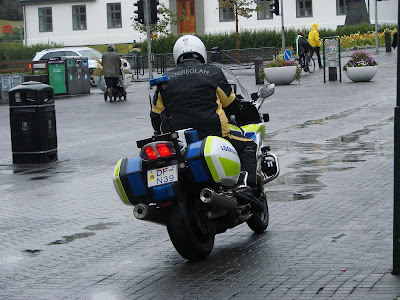 Fortunately, there were no counter-demonstrators and this cop (the police there are called Logrelan) sat quietly watching. 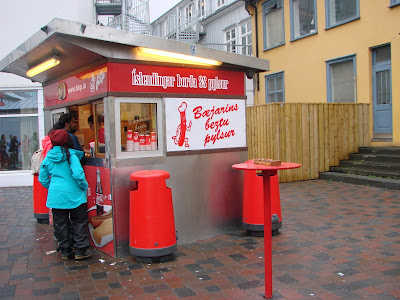 Street food was sounding good to us about then but not the popular pylsa. Apparently Icelanders love hotdogs. 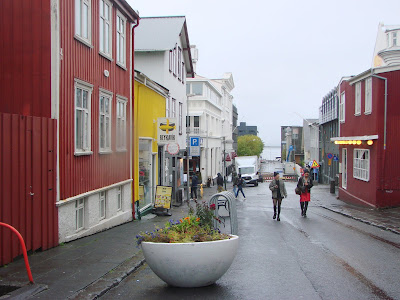 Instead, we went to a place called Reykjavík Street Food. It was an unexpected gem. We were just looking for a snack, and ordered a bowl of lobster soup. We asked the owner if they had any beer better than Gull and he said he'd take care of it, but not to tell anyone. He went across the street and came back with a couple of Bolli's that he'd bought! Then, the cook came out with fish and chips and set it in front of us. We told him we'd actually ordered lobster soup and he pointed toward the cook behind him, laughed and said, "This guy!" He left the fish and chips with us and also brought out our soup. Then the owner came around and pressed a couple of candy bars on us. It was all really good and just a wonderfully warm, friendly place. 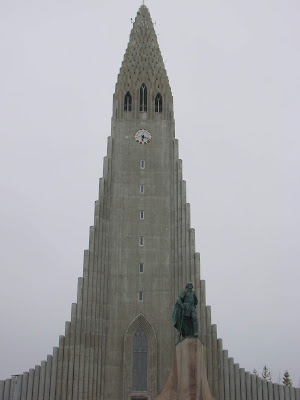 After the bigger-than-expected lunch, we walked around town a little more. We went into the Hallgrímskirkja, the Lutheran church built in 1937 and designed to look like volcanic basalt columns. It is named for Hallgrímur Pétursson, a 17th century Icelandic poet and clergyman. In front of the church is a statue of Leifur Eríksson, the Norse explorer banished from Iceland for killing Eyiolf the Foul. This sent him westward in search of the land sighted by another Icelandic explorer. It is thought that he and his crew were the first Westerners to land in North America, a place they named Vinland. 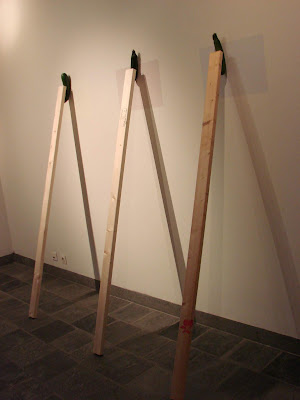 Then we looked around inside the church where there was a modern "art" exhibit. Like these zucchuni held up against a wall with boards. They represent... oh hell, I have no idea. It was produce and wood. Made no sense to me. 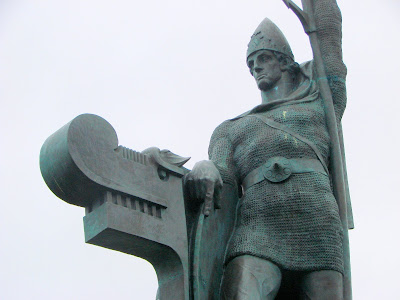 Another bit of art that I COULD understand was the statue of Ingólfur Arnarson, the Viking who fled Norway and sailed to Iceland in the 9th century. He cast his seat pillars into the sea and they washed up on the shore in a place he named Reykjarvík, or Smoky Bay. He is believed to be the first of the permanent Norse settlers of Iceland. 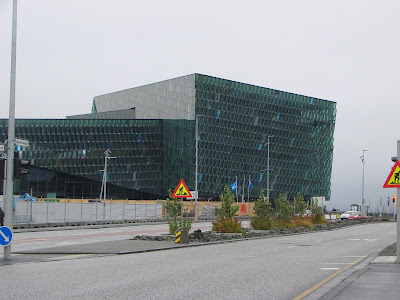 We also went by Harpa,  Reykjavík's opera house and concert hall. Like Hallgrímskirkja, it is meant to resemble the Icelandic basalt landscape. They started building it in 2007, but there was a long delay during the Kreppa, Iceland's financial crisis in 2008, and it wasn't finished until 2011. 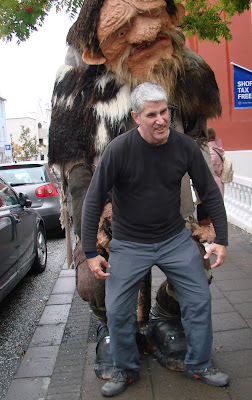 Have I mentioned my husband's patience with my requests for him to imitate staues? Here he becomes a troll. This troll is Leppalúði, the husband of the wicked Gryla and father of the Yule Lads. 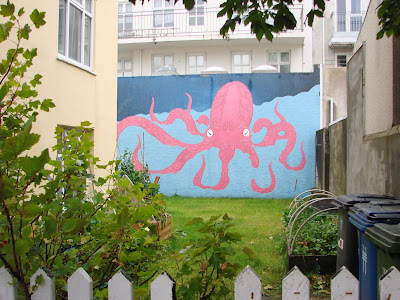 We wandered through the neighborhood around the town, passing this cool octopus mural, where I felt compelled to yell, "Release the Kraken!" 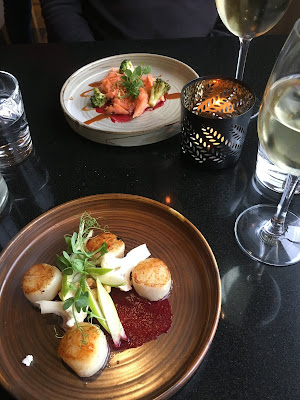 We had dinner that night at the Geysir Bistro on Adalstraeti. We'd had a big lunch, so we ordered small plates: scallops from Ísafjörður with apples, cashew nuts, cauliflower and noisette butter and oven-baked arctic char with romanesco, langoustine broth and pickled mustard seeds. 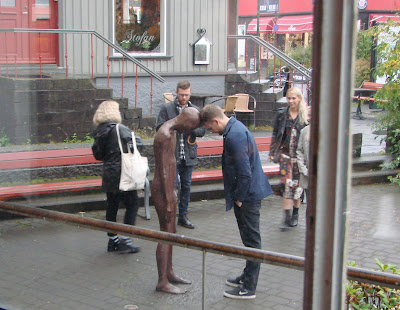 While we ate and drank our wine, we watched as people passed a sculpture of a man with a bent head and many stopped to interact with the art. I loved this guy's response. 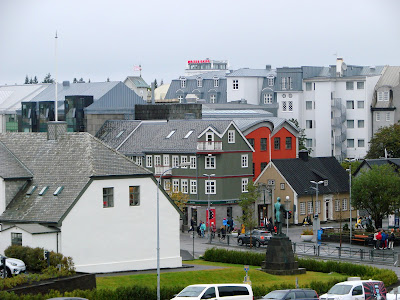 Reykjavík has about 123,000 in the city, and 217,000 in the greater Reyjkjavík area, out of Iceland's 340,000 total. It's a small city, but still contains most of Iceland's population. That explains why the areas we visited were so sparsely populated. We thoroughly enjoyed our day in the city, but I'm glad we spent most of our time in less touristy areas. 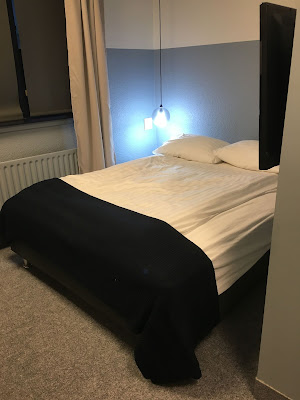 We spent our last night at a weird hotel near the airport in Keflavík. You can see that the TV, which we never turned on, was right next to the bed. We stopped in their bar for a drink before bed, and then flew home the next morning.  Later I was thinking that although I have no Icelandic ties, it still felt like home to me. The only other place I've felt that as strongly was Ireland. Maybe it's genetic - my surname is from a Norman family who went with William the Conquerer (originally known as William the Bastard) to Ireland. And my husband's surname is Norwegian in origin. All I know is that all in all, I found it to be an amazing trip.
Posted by Secret Agent Woman at 5:23 PM