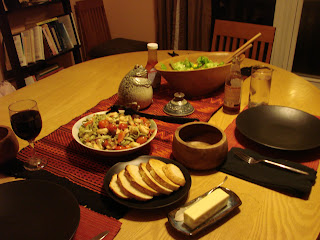 I admit it. I like good food. I remember the evening a few years ago, the first (and last) time I cooked for someone I'd invited over for dinner. Before he even tasted what I'd cooked, he asked for soy sauce. I got it for him, watched him douse the still-untasted food and thought to myself that he'd never be back at my table.  I don't think I could make a relationship work with someone who didn't appreciate my cooking. This dinner last week was an impromptu meal, where I just started pulling things out of the freezer, fridge and pantry to see what I could make. Salad, asiago bread, and spinach fettuccine with shrimp, grape tomatoes, peppers, olives, artichoke hearts and capers. Nothing unusual, but still tasty. 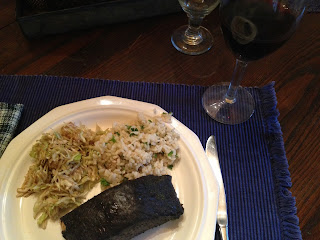 Last night a friend made me a belated birthday dinner. Salmon cooked in a nori seaweed wrapper (I plan to reproduce this one some time), a cabbage slaw, parsley rice, and asparagus that hadn't yet made it to my plate. 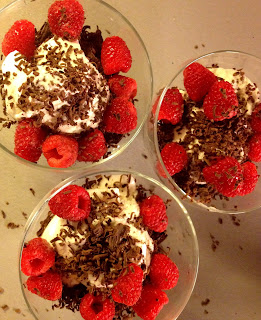 We had chocolate puddingish cakey-stuff for dessert, with wine. This is actually a raspberries and similar mousse-like stuff she served earlier when we got together a while back. I don't think there ever isn't chocolate after dinner at her house.  We stay up after her daughter goes to bed, eating dessert, drinking wine, and talking late into the night. 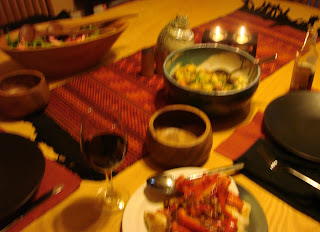 This horribly fuzzy photo was taken Monday night when I accidentally had my camera on the wrong setting. I'm putting it in anyway because the meal was so good. The salad with beets, oranges, and ricotta I won't make again - it was fine, but not a favorite. But the other two dishes more than made up for it.  I had pan-fried tilapia covered in strips of red pepper sautéed with butter, brown sugar and pecans. I also roasted peppers (anaheim, yellow bell, and banana peppers) and garlic and multi-colored potatoes and carrots. The roasted peppers and garlic were peeled and pureed with rice wine vinegar and oil, and tossed with the potatoes, carrots, and caramelized sweet onions. Not just good, actually, but absurdly good.
------

By request, the recipe as I made it for the potato salad:

Toss 3 pounds potatoes (I used the little multi-colored ones and some new potatoes)cut in pieces and a handful of little carrots, cut in chunks in olive oil, salt and pepper.  Roast in shallow pan at 425 until easily pierced with a fork.

Microwave 1 large sweet onion in its skin for a couple of minutes, cut into thinly slices, and saute in a little butter and olive oil until browned.

Meanwhile, put Anaheim peppers (I used one Anaheim, one banana pepper and one orange bell pepper)and a clove of garlic still in its skin in another shallow pan with the potatoes.  When they are just starting to brown, remove and after cooling a bit, peel of skin and remove seeds.  Cut up a few pieces of the less hot peppers (Anaheim and bell) to go in the salad. Put the rest (1/2 C) into a blender with the peeled roasted garlic clove, 1/2 C rice wine vinegar, 2 T sugar, a little salt and pepper.  While blending, slowly pour in 1.3 C canola oil. Toss the roasted potatoes, carrots, and caramelized onions with some of the pepper vinaigrette.  (There will be too much, but it makes a great salad dressing for later.)  Sprinkle with fresh torn parsley.
Posted by Secret Agent Woman at 7:11 PM