What, you don't have an AK-47 on your woodstove? 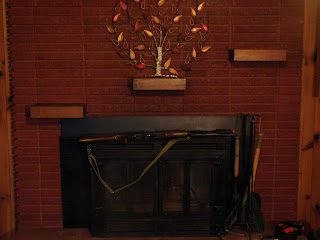 This Quaker parent never thought she'd have a son who was so intrigued by knives and guns. It's the woodsman in him. He does a little blacksmithing in a forge he built himself, and has made some of his own knives. He also has several machetes, a kukri he bought from a company in Tibet, and a old bayonet. He is at his happiest working at the anvil, using the angle grinder to edge a sword, or chopping his way through the woods. Recently, he presented a well-considered argument for purchasing an Airsoft pellet rifle, assuring me that he would be shooting only at targets and never at animals. I don't worry about that, actually. When I  discovered last week that a mouse had found its way inside, I set a trap and heard it go off that evening. The conversation:
Me: "Uh oh, I think I just caught the mouse.  But I can't check because it might not be dead yet."
Son: "Mom, you have to check because it might not be dead yet."
Me: "I know, but I just can't." He got up and pulled out the trap, and studied the mouse for a moment.
Son: "Aw, sad face."  And then asked if he could put the little body in the woods rather than the trash.

In the meantime, I am caused to marvel at how you might teach your children your values, but ultimately they must walk their own path. He's a sensitive kid and opposed to violence, and even generally sticks to a vegetarian diet even when away from home. But he likes building the skills he thinks he would need to be self-sufficient. He likes being competent with knives and guns. In this way, he and my friend are two peas in a pod. He is interested in my son's knives and even bought him the angle grinder. When he was over not long ago, I asked if he wanted to see my son's Airsoft rifle.  He picked it up and said, "It's an AK-47!  Jesus!" And then proceeded to explain the features of the gun to me and why it was an extremely realistic copy, and even shot some pellets into the ottoman. How did this pacifist end up with two weapon-enthusiasts in her life?
Posted by Secret Agent Woman at 7:34 PM