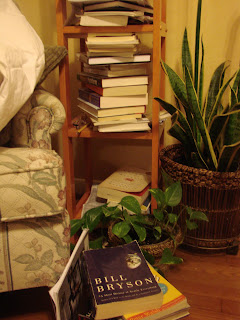 I used to be a voracious reader. As a kid, I once set fire to bathrobe and blanket I'd draped over a plastic mushroom lamp in my bedroom (yes, it was the '70's) so that I could secretly read late into the night.  I had a hard time explaining the melted lamp the next day. After that, I took to lying on the floor reading by the tiny bit of light coming in under the door from the hallway. In high school, I made my way down the hallways between classes reading a book as I walked, and then tried to read surreptitiously under the desk. When I had my first baby, I'd sit in an armchair for hours holding a book off to whichever side he wasn't nursing on at the moment. Later, when I was reading the Harry Potter series to my boys, I discovered I could read one page aloud while silently reading ahead on the opposite page. Occasionally, when something bad was coming up on the next page, I'd say, "Oh no!" and the kids would yell, "Mom, don't do that!"

But in recent years, I'd stopped reading much just for fun. Life got in the way - the pressures of running a household on my own with the endless projects required by purchasing an old house, managing a private practice, various relationships. But at the beginning of this year, my sister called my attention to the Goodreads website where you could challenge yourself to read a certain number of books in a year's time. I set a goal of a couple of books a month and started reading. By July, I was well ahead of schedule, and bumped the 24 up to 36. A couple of days ago, I finished the last book, with half a month to spare. 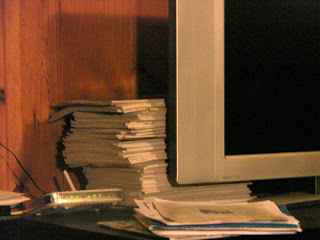 I'm taking a book break for the last bit of 2012, before I start the 2013 challenge. In the meantime, I'm plowing my way through a stack of New Yorker magazines I brought home from the office. There were a dozen or so from 2009 and 2010, and tonight, I start in on the 2011 pile. I just read the parts that interest me - articles on biosynthetics, the oddly conservative founder of Whole Foods, cryonics, building safe cooking stoves for impoverished African countries, changes in the cookbook industry, the problem of intersexed athletes, Supreme Court Justice Sonia Sotomayor, rising health care costs, Michelin guide restaurant inspectors.  So much to read, so little time!
Posted by Secret Agent Woman at 10:04 PM